This month’s round-up of highlights from national and club events poses the big question: when did special saloons last race on the Brands Hatch Grand Prix circuit? 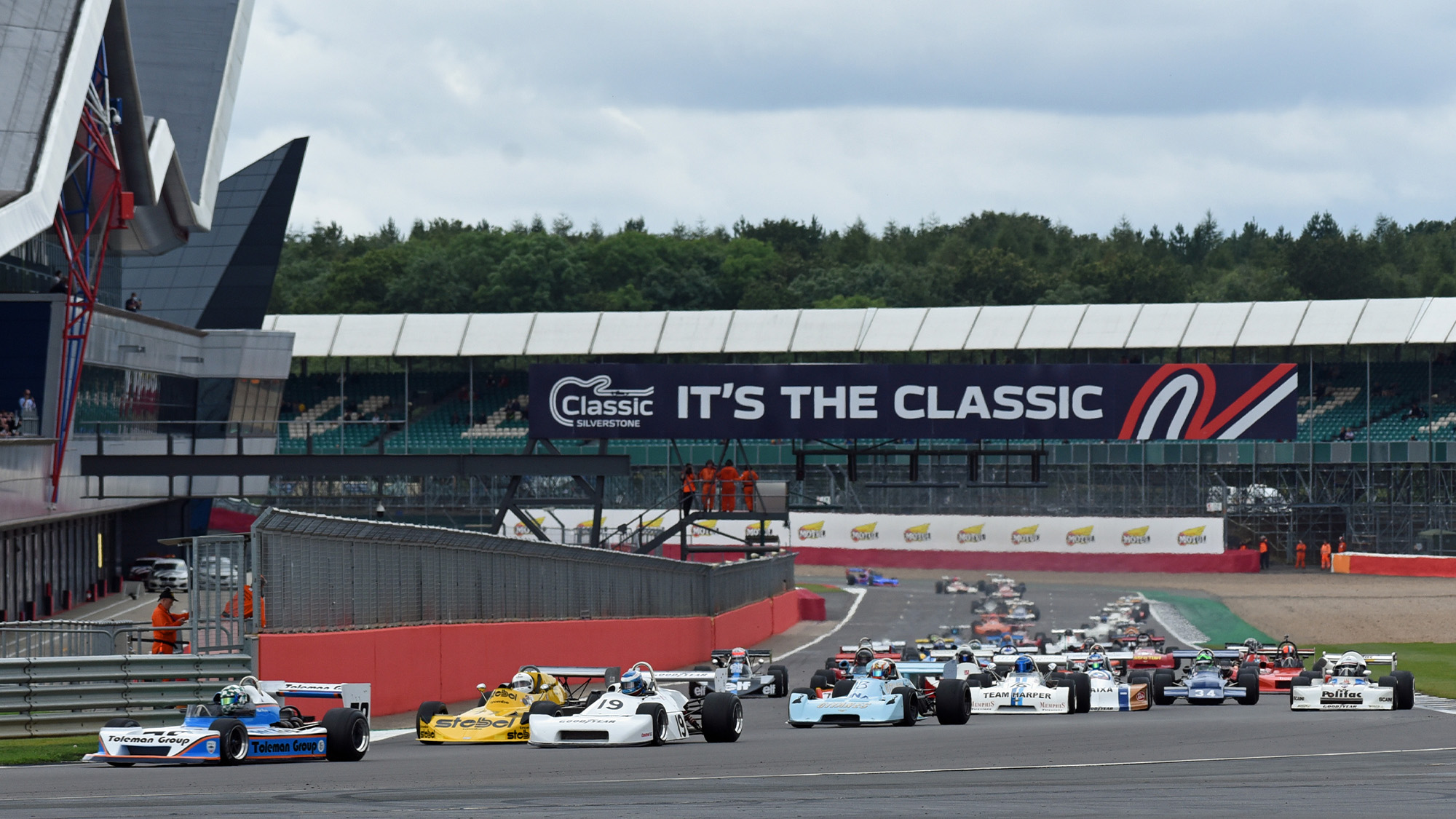 It wasn’t merely the event’s content – historic racing, heritage parades – to which the name applied.

Think back over the years to landmark Silverstone moments. The 1978 International Trophy, for instance, remains memorable not for the quality of the competition but for foul conditions that accounted for several fancied runners. World champion Niki Lauda spun his Brabham into the mud before the race had so much as started and Keke Rosberg went on to give Theodore its only F1 victory, he and Emerson Fittipaldi fully three laps clear of fellow podium finisher Tony Trimmer’s Melchester McLaren.

And the 1975 British GP stands out for the downpour that triggered a race stoppage rather than Fittipaldi’s final world championship grand prix victory. By the time a red flag appeared on the start-finish straight, most drivers were scrambling to get free from the catch-fencing in which their cars were ensnared – including Carlos Pace, Jody Scheckter, James Hunt and Mark Donohue, who were eventually classified second to fifth, a lap behind the winner.

Such were the events this year’s Classic brought to mind as it splashed into life on the Friday, in its final running before switching to an August Bank Holiday slot from 2022. That, of course, is when Oulton Park’s Historic Gold Cup traditionally runs; it would be bewilderingly stupid for the two to clash, so one can but trust they won’t…

Rubbish weather confers certain advantages at Silverstone, though, especially if you are taking photographs rather than driving. The backdrop – a fusion of debris mesh, scaffold grandstands and concrete – does not match the magnificence of the track it envelops, so large rooster tails can be a useful artistic aid.

Whatever one might think of the venue, however, there is no denying the consistently high quality of The Classic in terms of the entry it attracts and the racing it generates.

One can but wonder why some of these cars are seldom seen elsewhere. 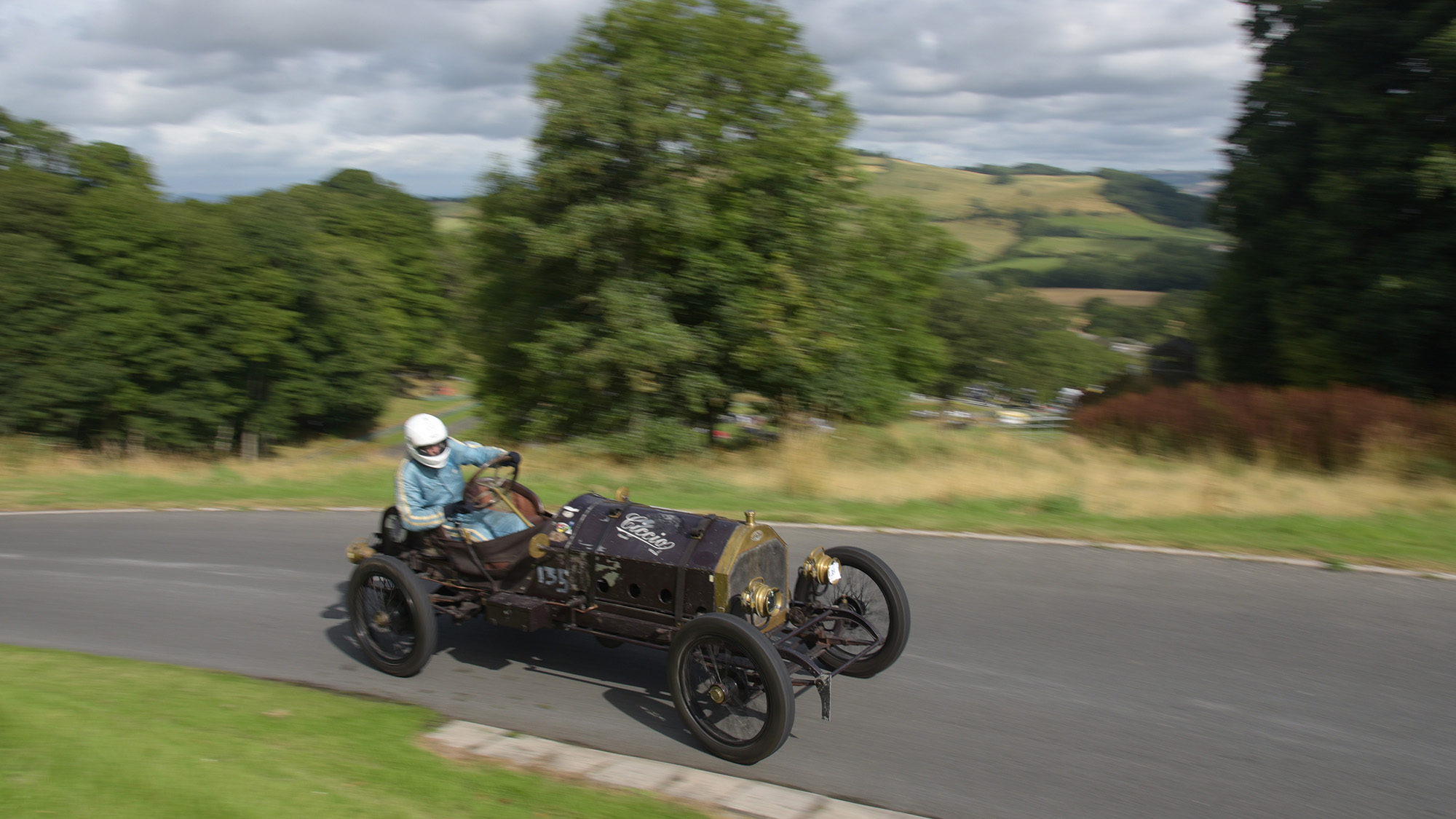 The 1911 SCAT of Andrew Howe-Davies, part of a very strong entry of Edwardian cars

Hard to believe almost two years had passed since last I set foot in Prescott; the correct word, I believe, is ‘idiot’. Absence, though, does what it says on the tin.

The feelgood factor kicks in long before you reach sleepy Gotherington, at the foot of the final rise towards the venue. On a quiet, sunny morning – the weather refusing to comply with prophecies of doom on the BBC App – the A40 is a lovely road to drive, particularly once you’re in the open countryside beyond Burford.

If only all competitive commutes could be this way.

It was the first day of the VSCC’s traditional August meeting, the only event that still deploys the 880-yard short course first used in 1938 (and bereft of the 247 yards that form Ettores loop). 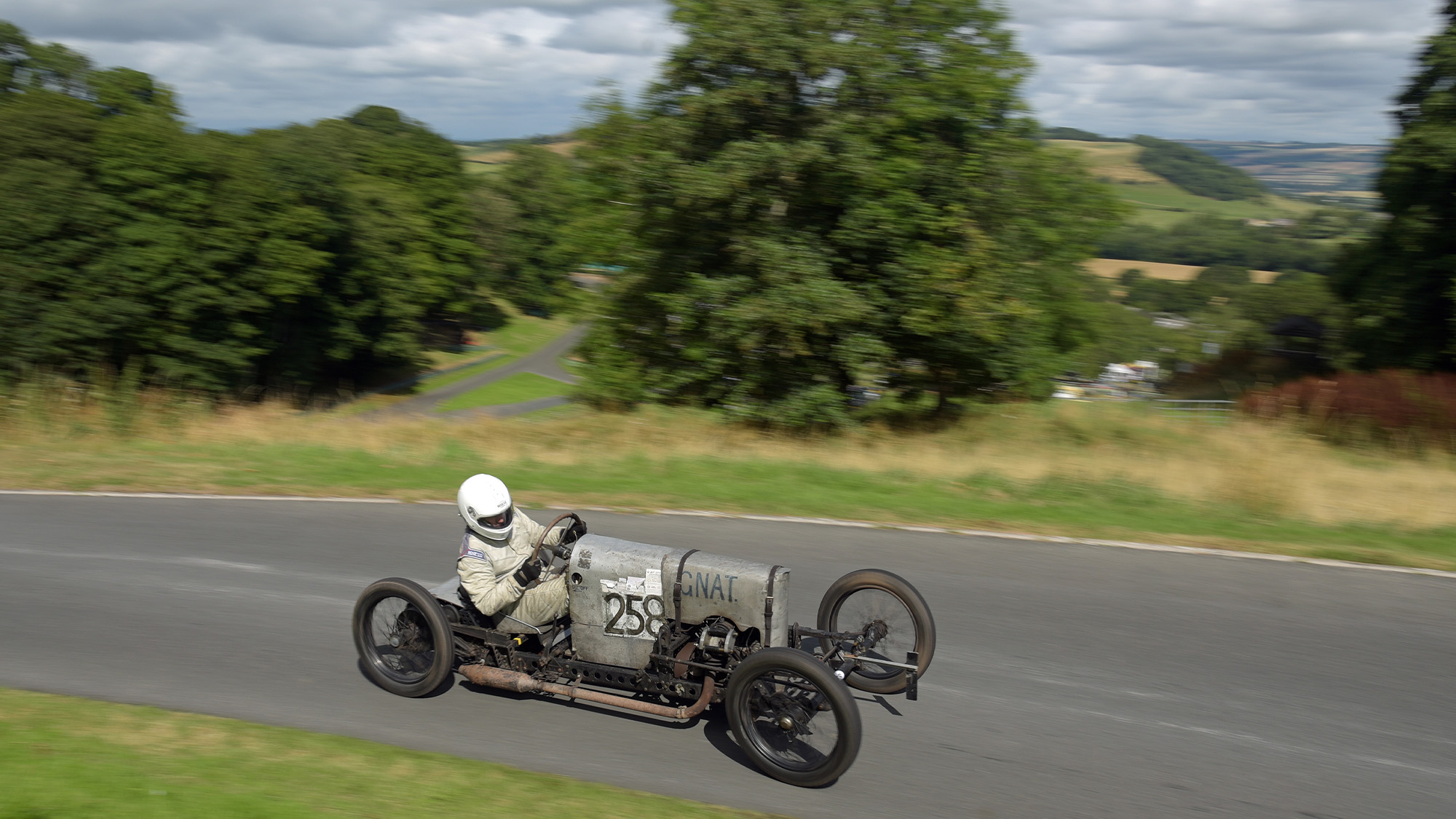 John Wiseman’s Gnat: a wheel at each corner, but not much else

As is traditional at VSCC events, the atmosphere is engaging throughout the paddock and all the way along the course (though enthusiasm is slightly dampened halfway through the afternoon, when BBC Weather finally proves to be correct, several hours behind schedule).

Bentleys, ERAs and Bugattis convey a certain period elegance as they sashay their way to the summit, but much of the meeting’s core charm comes from the thundering Edwardians and eccentrically fashioned single-seaters such as the Gnat, GN Spider and Austin Maggot. The inclusive nature of VSCC events adds a certain something, too; the cars might belong to a certain generation, but their drivers represent several.

This isn’t just a wonderful motor racing spectacle, it’s a highlight of our national sporting calendar. 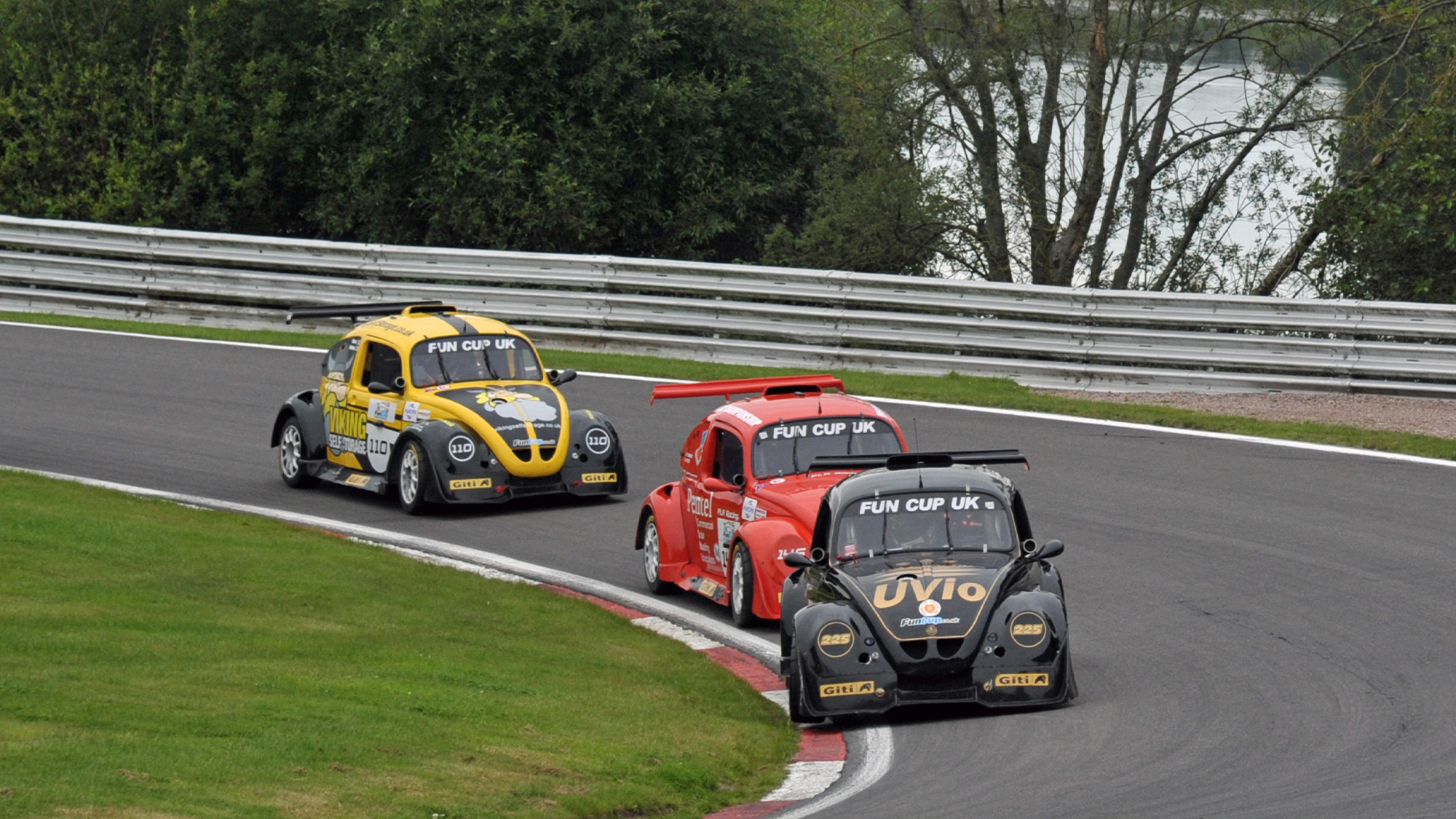 Winners Randaccio and Deott faced pressure throughout, from a number of different cars

Confession time. If you were at the Oulton Park Fun Cup race in October 2010 and wondered why the race commentary was a little lopsided in mid-afternoon, I can explain.

Having been persuaded against my better judgement to have a go at talking rather than writing – and on a weekend off between the Japanese and Korean Grands Prix, when perhaps it might have been wisest to stay in Asia – I found myself stationed in the Knickerbrook commentary box, talking about 25 VW Beetles shared by about 60 drivers of whom I knew relatively little.

By way of habit, I had my cameras with me and might be unusual in having commentated on a race while simultaneously trying to take photos through the window, but I digress…

After about 90 minutes, half-distance, the excellent lead commentator Richard Sproston invited me to join him in the main box on the pit straight, so he could go for a wander and conduct pit interviews. I did as instructed, but took rather longer than anticipated as the opportunity to take a few more photos en route was all too tempting.

Apologies, Richard, but I did get there eventually. 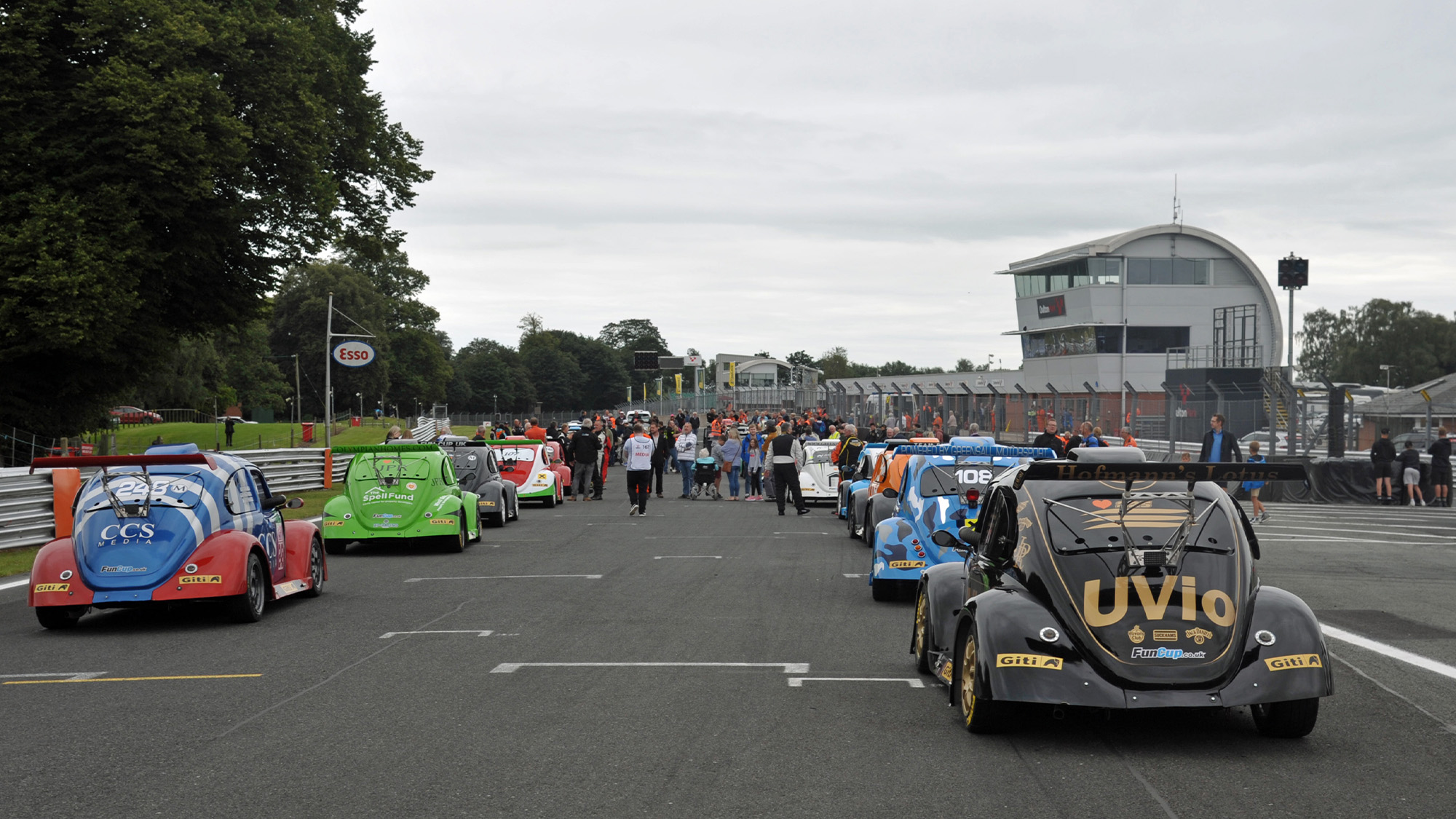 The winning Beetle lurks at the back during the Fun Cup grid walk; it would not be there for long

More than 10 years would pass before I’d renew acquaintance with the Fun Cup – and this time I had no intention of doing anything other than stay outdoors.

There wasn’t much scope to weave a supporting cast around the event’s four-hour pivot, but there were solid entries for the Modified Ford Series and CityCar Cup (Citroën C1s, Peugeot 107s and Toyota Aygos, so a one-make series in all but badge), although the latter lost a few cars in a sizeable first-corner pile-up that caused the opening race to be red-flagged. The result for the second would be declared after a solitary lap, after another interruption caused by a barrier-flattening episode at Lakeside…

Things were a little calmer – or at least, less disruptive – in the main event. It took Fabio Randaccio/Farquini Deott only a couple of laps to come through from the back of the ballot-drawn grid to challenge at the front, but once there they were involved in a fierce contest to the end. With only a couple of laps to go they crossed the line absolutely level with the Team Olympian Beetle of Kristian Rose/Riley Phillips/Chris Dovell – and it was only when the latter subsequently ran wide at Shell, while trying to wrest the lead, that the outcome was settled.

I shall endeavour to watch again before 2032. 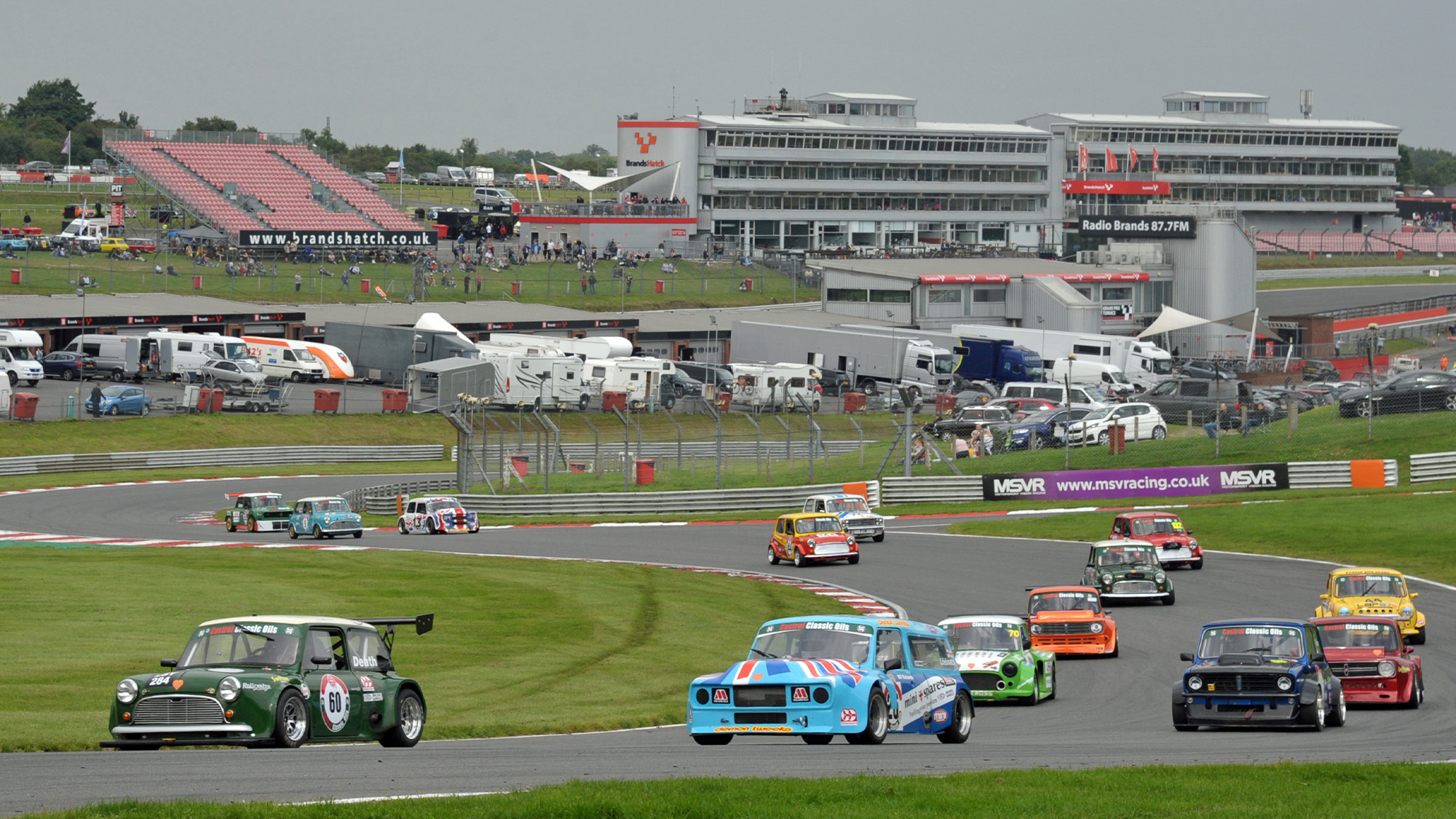 Death leads a glorious array of shapes and sizes through McLaren, ahead of FMITW race two

You rarely see many original Minis on the road nowadays, but on this occasion the M25 and A20 were full of the things. With themed events such as this, the journey can be almost as entertaining as the racing.

Actually that’s not strictly true, because not many things can match a Mini for competitive zest. After the opening Miglia event, one of the marshals at Paddock turned to his colleagues and said, “I think that was the greatest race I’ve ever seen.”

He had a point.

Endaf Owens recovered from a brush with the Paddock gravel to get the best of a hard, clean tussle with Andrew Jordan and Aaron Smith. The three swapped places constantly and effectively formed a 12-wheeled Mini for most of the 19 laps – copybook racing within an exquisite amphitheatre. 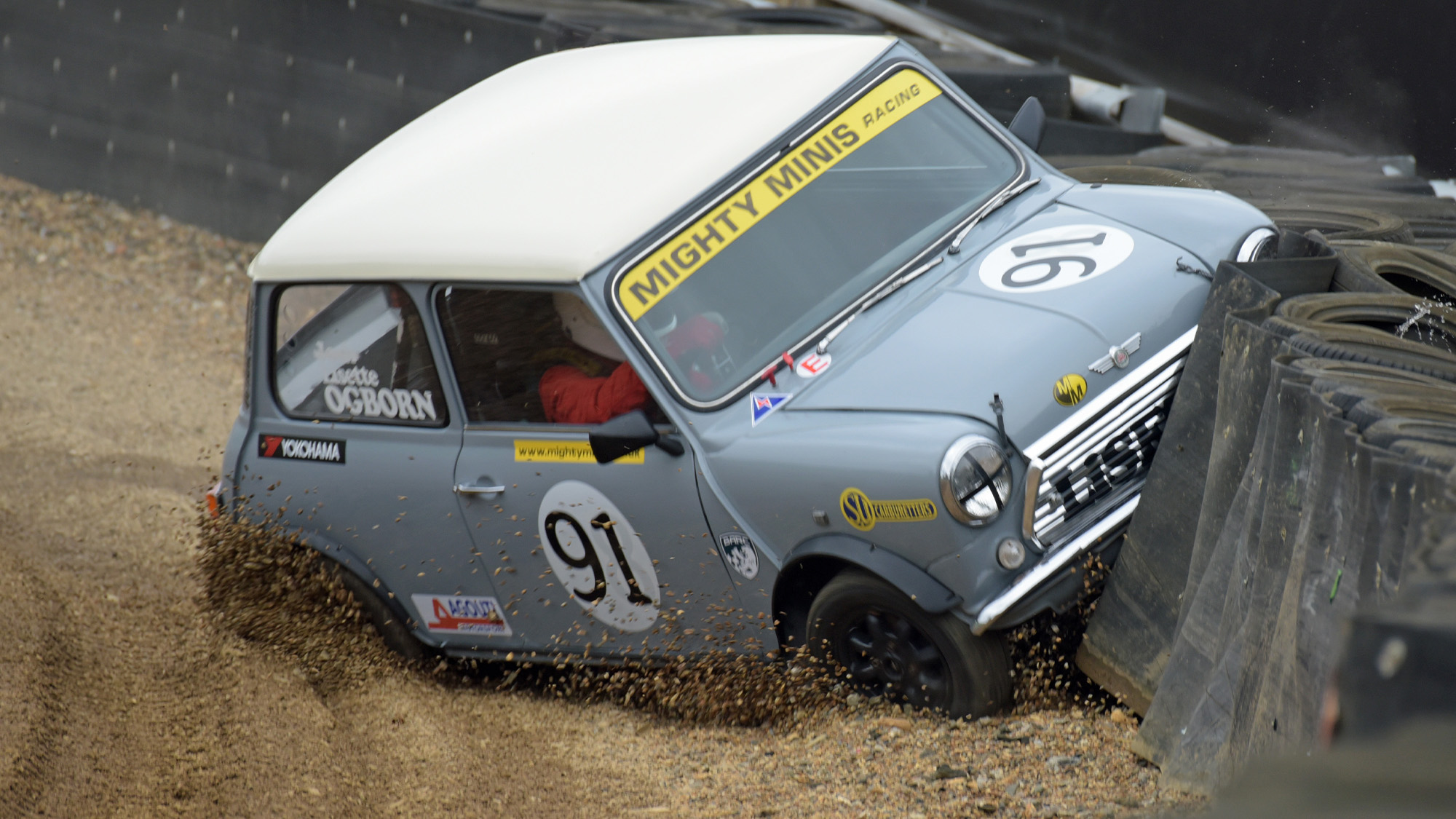 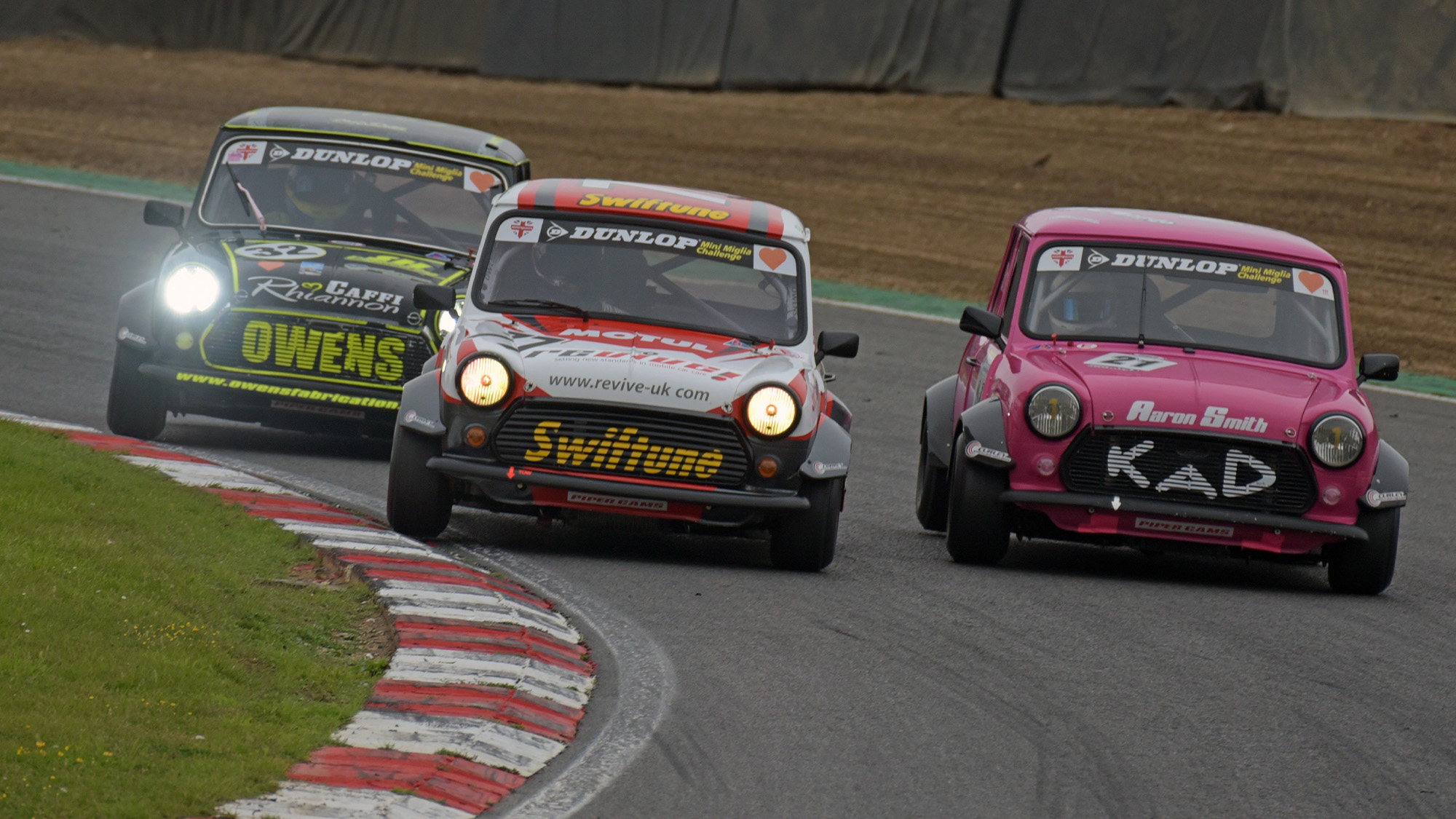 That set the tone for much of the day. There were a few red-flag irritations and the F3 Cup remains sorely in need of a shake-up, but mostly it was a showcase for everything that is good about our sport.

Harvey Death won both Fastest Mini In The World races in his lovely, flame-spitting 2.6 V8-powered Cooper S, overcoming a field containing a dazzling array of flared arches and aerofoils that appeared to have stepped straight out of the 1970s.

Wonderful, in a word.

If only the essence of Mini racing could be bottled. Perhaps you could market it as ‘transmission wine’… 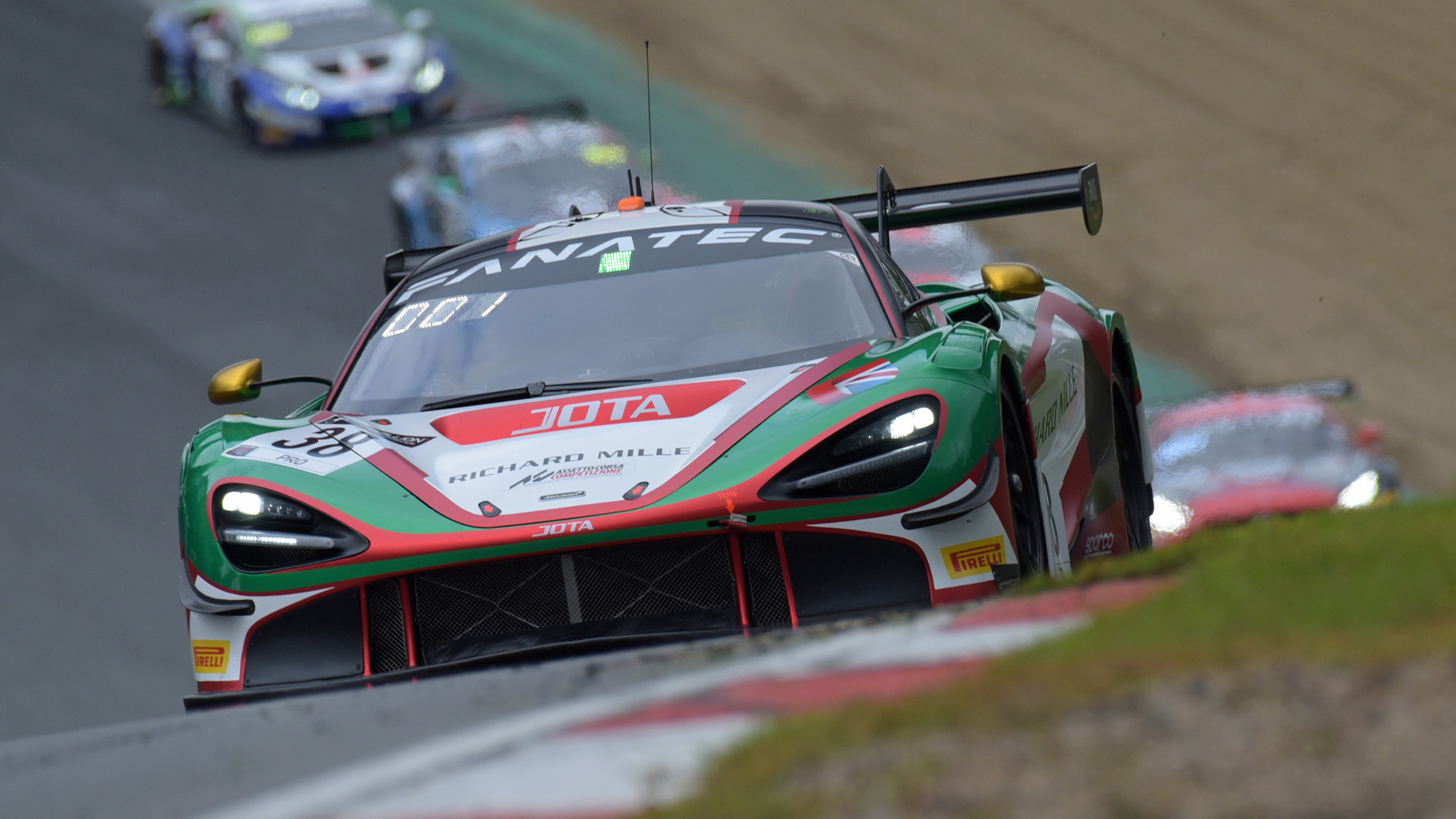 Ben Barnicoat leads the field during his stellar opening GT stint at Brands Hatch; his efforts went unrewarded as co-driver Ollie Wilkinson was pitched off the track

And at the opposite end of the heft scale…

The British GT Championship is a wonderful thing, but a full grid of GT3s arguably sounds better than anything else in contemporary racing – and looks the part, too. These are cars with real presence, the downside to which is that they can do significant damage when their kinetic energy is released in an unpredictable manner.

There was a substantial delay on Saturday morning, after an Audi thumped the barrier at Westfield. As it was put to me, “It took longer to repair the circuit than it did to fix the car.”

Sunday’s opening race ended dramatically, too. Ben Barnicoat had qualified Jota Sport’s McLaren on pole, but was docked two places after it was ruled that he had impeded other cars later in the session. No matter, he swept through to lead during the course of the opening lap and absolutely battered his opposition thereafter. His co-driver Ollie Wilkinson continued to lead after the pitstops, but was being caught by former Ferrari F1 junior Raffaele Marciello as the race drew towards its conclusion. With only a few minutes remaining, a Ferrari got in the way as it was about to be lapped, Marciello’s Mercedes tagged the McLaren – and launched it over the barriers at Dingle Dell. Wilkinson was unhurt, Marciello took the flag – and was then penalised for causing the collision, handing victory to the Audi R8 of Christopher Weerts/Dries Vanthoor. Marciello and co-driver Timur Boguslavskiy led throughout in the second race, but then lost that, too, when the front right wheel failed on the final lap, the rim (minus tyre) coming off altogether as the Russian crossed the line. 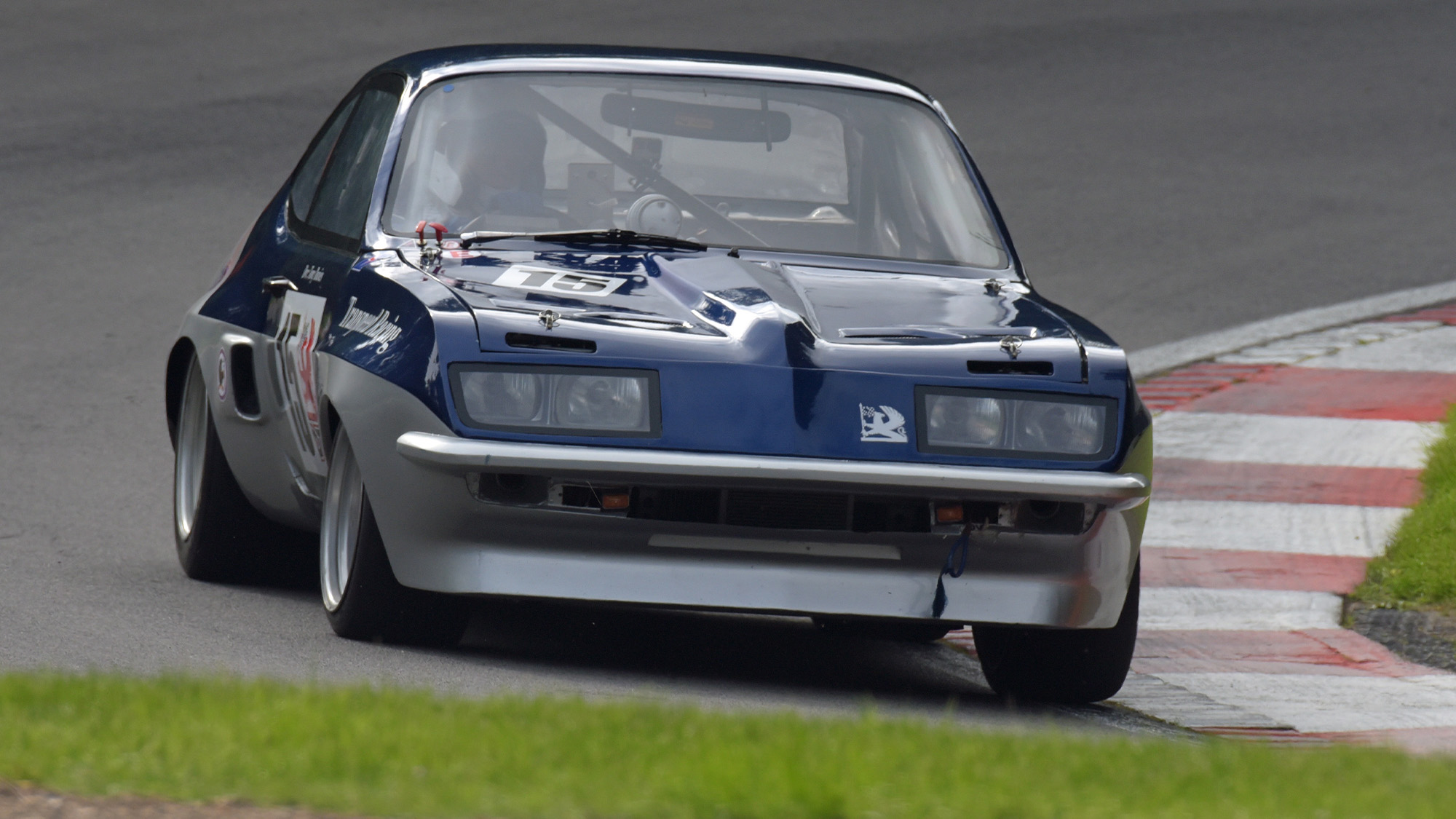 A familiar sight in the 1970s, the Transpeed Firenza of Tony Davies was part of the magnificent 40-car special saloon & modsports entry

Perhaps the best aspect of the whole event was that a prestigious international sports car race was supported by the homely charms of the Classic Sports Car Club, which attracted a remarkable 40-car field for its combined special saloons/modsports races (though one of those had to be canned because of the various delays).

I have been attending events at Brands since 1978 and can’t recall ever having seen those on the grand prix loop.