The circuit gates were unlocked, pit garages dusted down, and the cobwebs flicked from marshal’s flags. As a new season of racing began, out from hibernation rumbled powerbikes, sidecars, classic racers, single-seaters and swarm of MGs, all rapidly pursued by Motor Sport’s Simon Arron.

Once again, he has donned his trusty rucksack in preparation for another season of gripping national racing, and we bring you his opening reports from March. 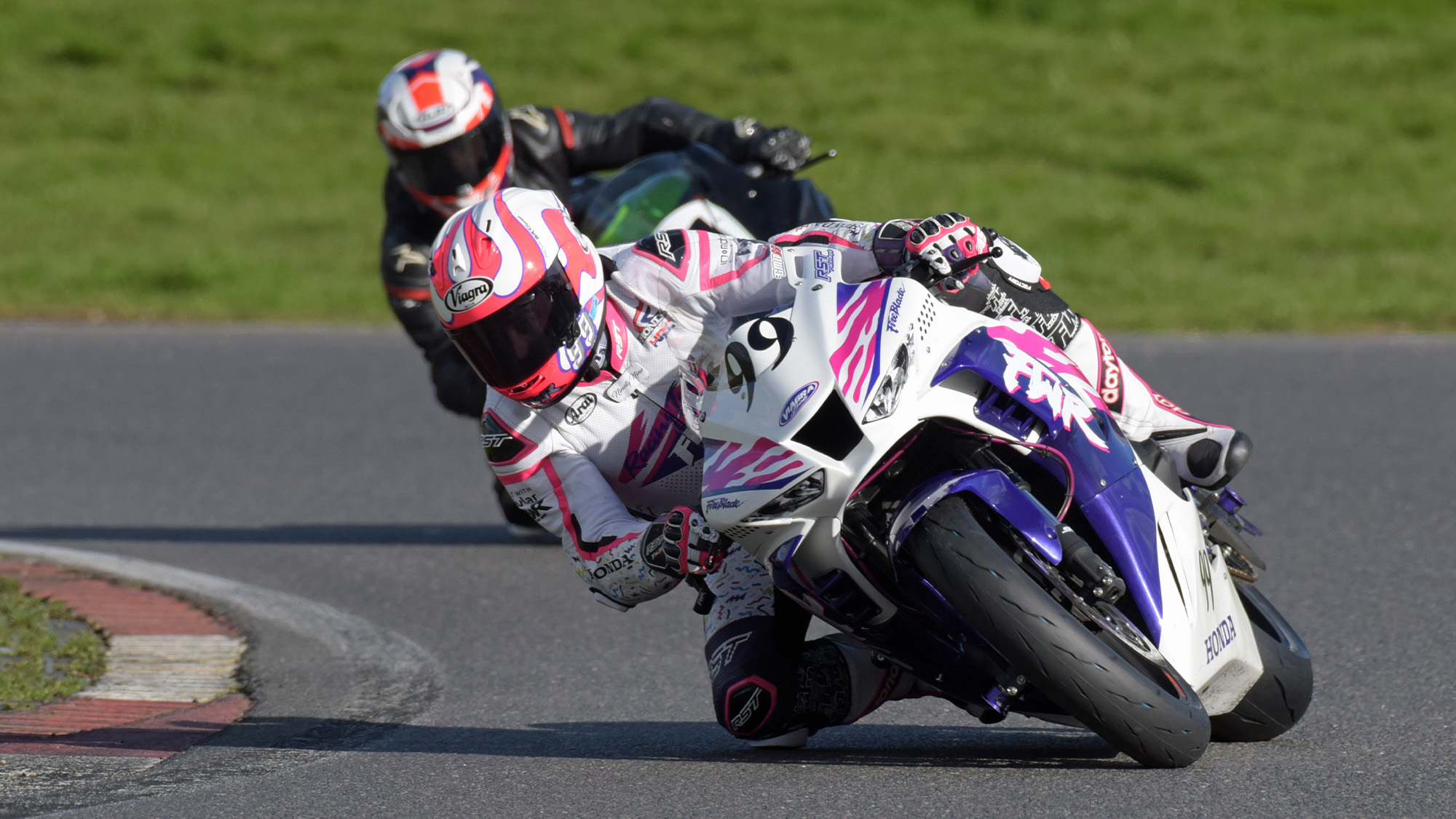 Lean on me: Bob Collins (Suzuki GSXR 1000) heads through Clearways en route to victory in the opening MRO Powerbikes race

According to a programme collection that continues to sprawl ever more broadly, on March 12 1977 I attended the Century Oils Championship Car Races meeting at Oulton Park (below). 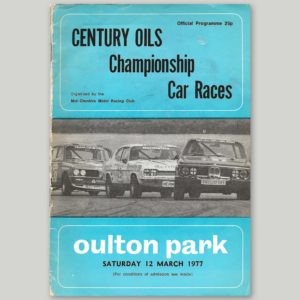 With hindsight, the itinerary doesn’t look particularly appealing – six short races spread out across the afternoon – but at the time it would have seemed one of the best things in the world: the first local event of the campaign after five months of competitive starvation.

I was 16 then and am 61 now, but time’s passage seems not to have diluted my enthusiasm for a sport I have always held dear. On March 12 this year, precisely 45 years on from the above, I headed out once again with a parallel sense of anticipation. The set-up wasn’t so different, either: back then it involved pushbike, train ticket, simple camera kit and a rucksack containing packed lunch; the modern equivalent features Peugeot 207, media ticket, suite of Nikon equipment… and a rucksack containing packed lunch (I recommend Sheldon’s oven-bottom muffins stuffed with strong Lancashire cheese).

In truth, the BMRMC bike clubbie at Brands Hatch wasn’t my first event of the year. I’d attempted to attend the Heavy Metal Classic banger festival at Standlake early in January, but traffic chaos close to the venue persuaded me to turn around and head off in search of red kites, to enjoy a spot of wildlife photography instead. I did make it to Hednesford Hills Raceway the following weekend, to watch Nissan Micras and suchlike being demolished, but that was more of a social occasion than a professional commitment. 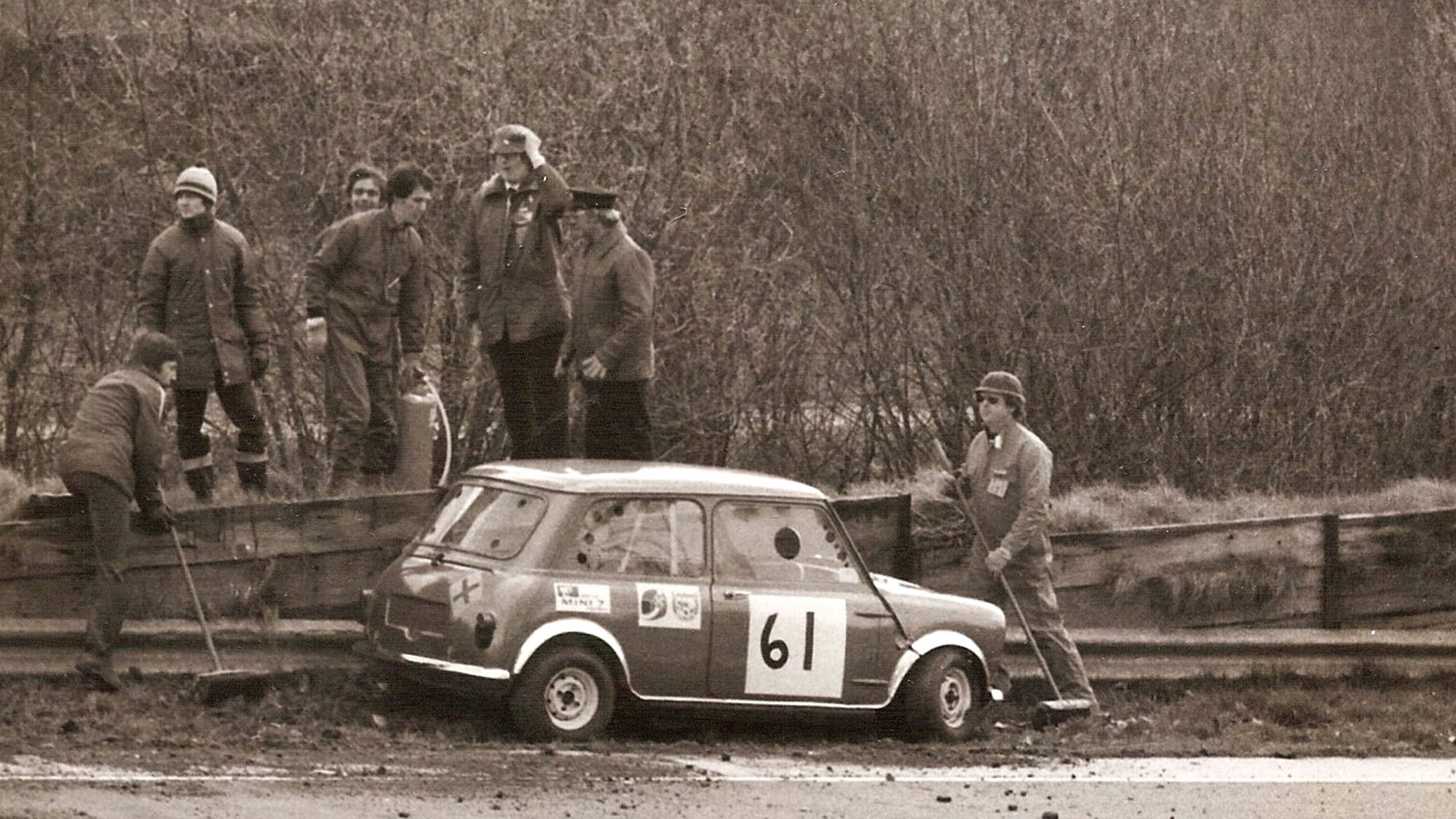 Flashback: marshals tend to Geoffrey Cross’s stricken Mini at Lodge Corner on March 12 1977, as snapped by a teenage Arron

Brands, then, is where my 2022 campaign began in earnest.

Practice was barely two minutes old when I heard the unmistakable sound of Kawasaki fairing on asphalt while walking towards the inside of Surtees; by the time I got there, the youngster concerned was trudging back towards the paddock, shoulders slumped, but in their defence it did look very slippery.

As ever at BMCRC events, the entry was equal parts breadth and diversity, from the two-stroke musk of spindly MZs to the bruising muscularity of powerbikes. Wherever they sit in the motorcycle racing hierarchy, however, all classes are united by common bonds, not least passion, commitment and camaraderie. After fierce lead battles, of which there were several as conditions brightened, the most common post-race reaction was for the riders involved to exchange fist pumps as they cruised around side by side on their cooling-down lap – a lesson for competitors at all levels, irrespective of how many wheels they have. 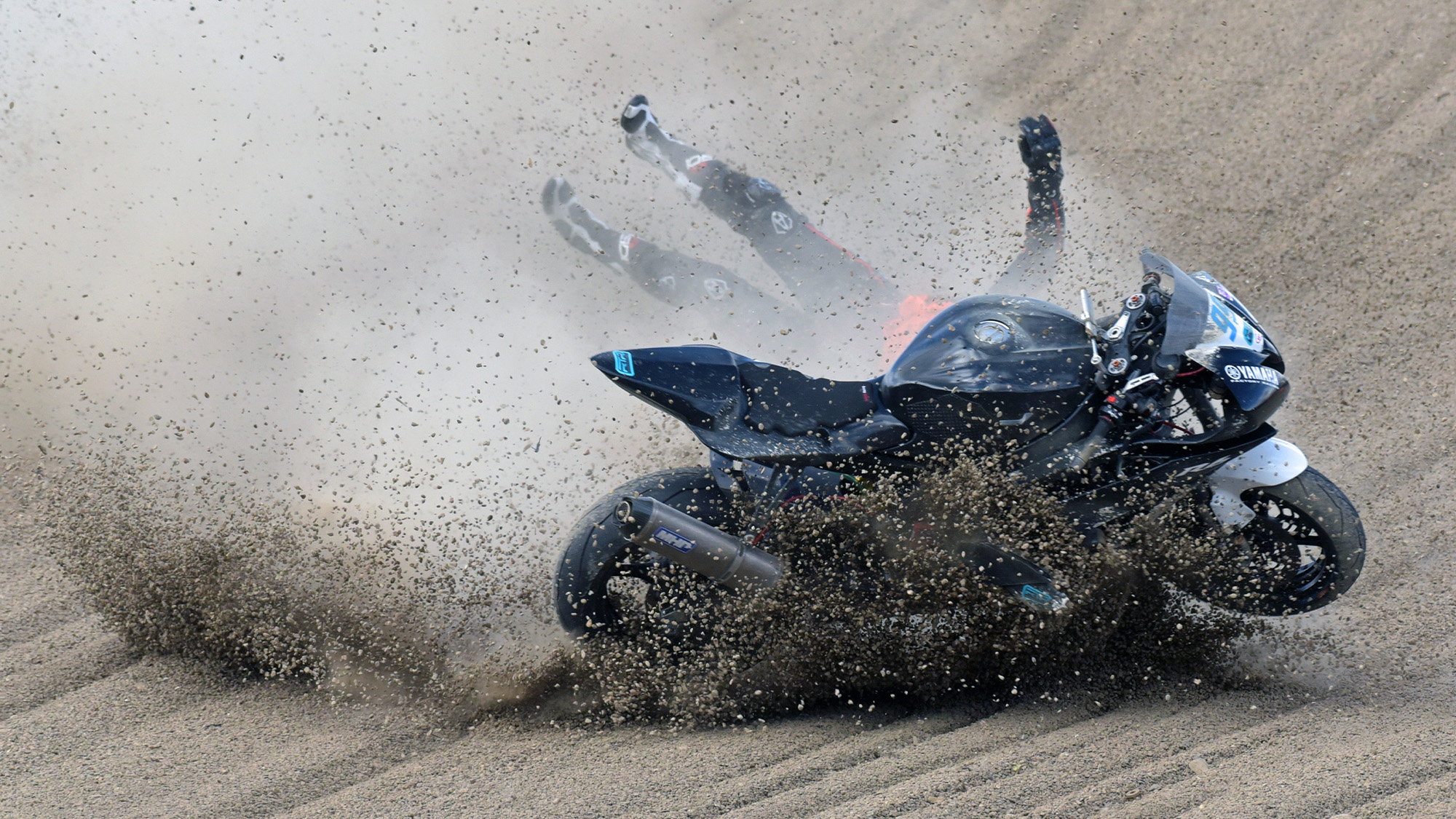 Rookie 600 rider Scott Bacon’s season gets off to a tricky start as he and his Yamaha R6 tumble into the Paddock gravel. He was unhurt

The second day proved to be a little more fragmented, not helped by tricky, drizzly conditions that triggered a number of interruptions. In one of these, at Graham Hill Bend, several bikes came down and leaking crankcase oil necessitated a chemical clean-up. Trouble was, the required bowsers were in the paddock and had been rendered temporarily inaccessible by parked cars.

In some ways it was just one of those days, but the competition remained effervescent – and sidecar racing continues to be as engaging a form of entertainment as has ever been invented. 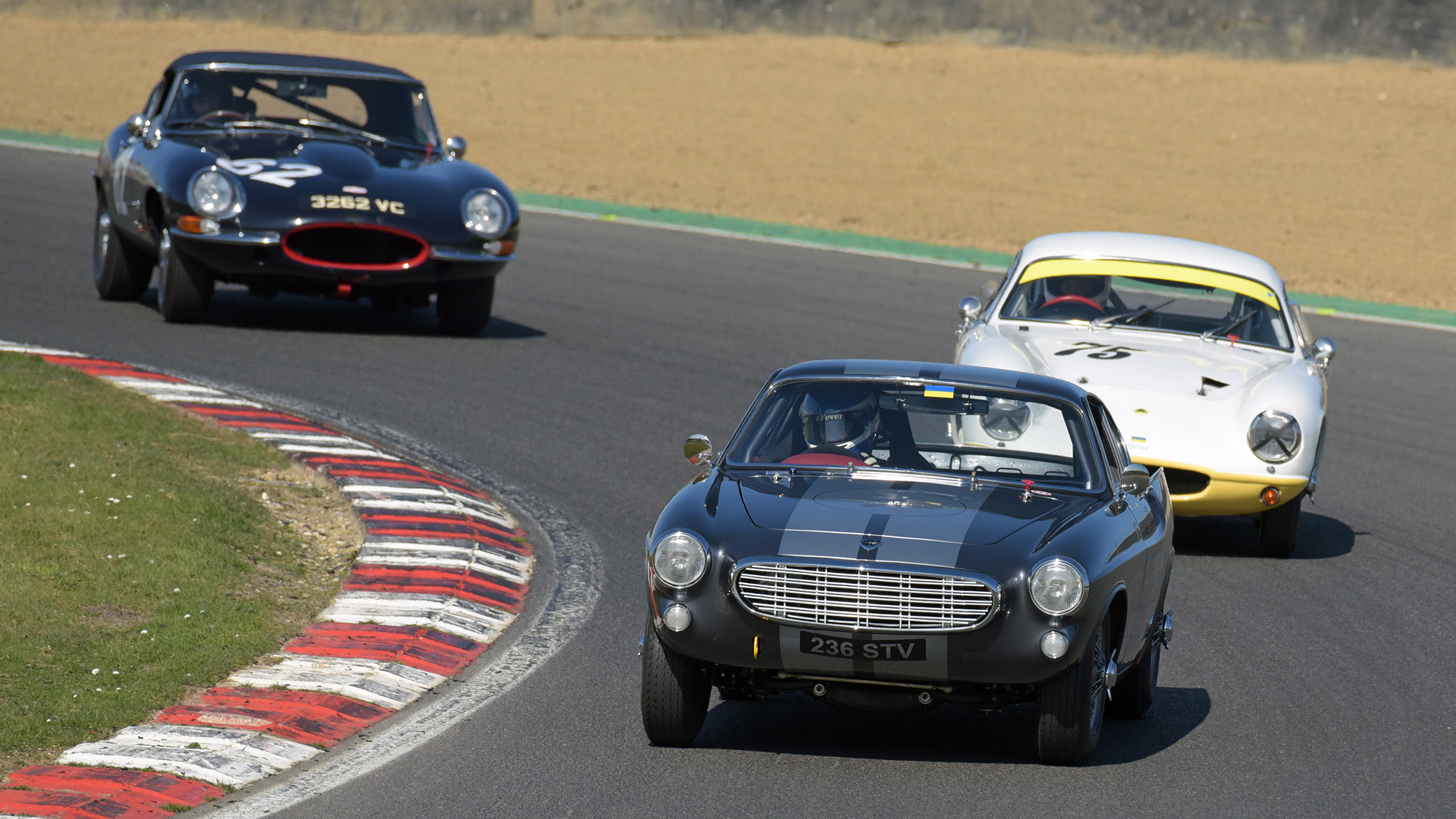 A small but notable landmark, this, for it was the first meeting ever to be organised and promoted by Equipe Classic Racing, which has been extending its footprint across British motor racing over the past few years. A particularly nice touch was the production of a neat race programme, distributed freely at the gate to one and all.

It was the first of eight meetings this year at which the various Equipe series will appear, future stops including Snetterton 300 (April 18), Oulton Park (May 21), Brands Hatch GP (May 29), Silverstone GP (June 11-12), Donington Park (July 3), Snetterton 300 (August 6) and Silverstone National (September 10). And although the club was originally set up to recreate club racing of the late 1950s and early 1960s, it is introducing a class for sports cars and saloons from the 1970s, with trial races at Silverstone (June) and Snetterton (August). If it takes off, as Equipe projects have a habit of doing, the plan is to introduce a full programme of events next year.

In the manner of yore, this meeting featured only six races (although unlike the manner of yore, they all ran for a decent distance). In keeping with Equipe’s close-but-clean mantra, track etiquette bristled with period courtesy, though there were a couple of mishaps. Nick Matthews’s Elan ended up inverted in the Paddock gravel during practice, but it was a gentle topple and not enough to prevent him racing. 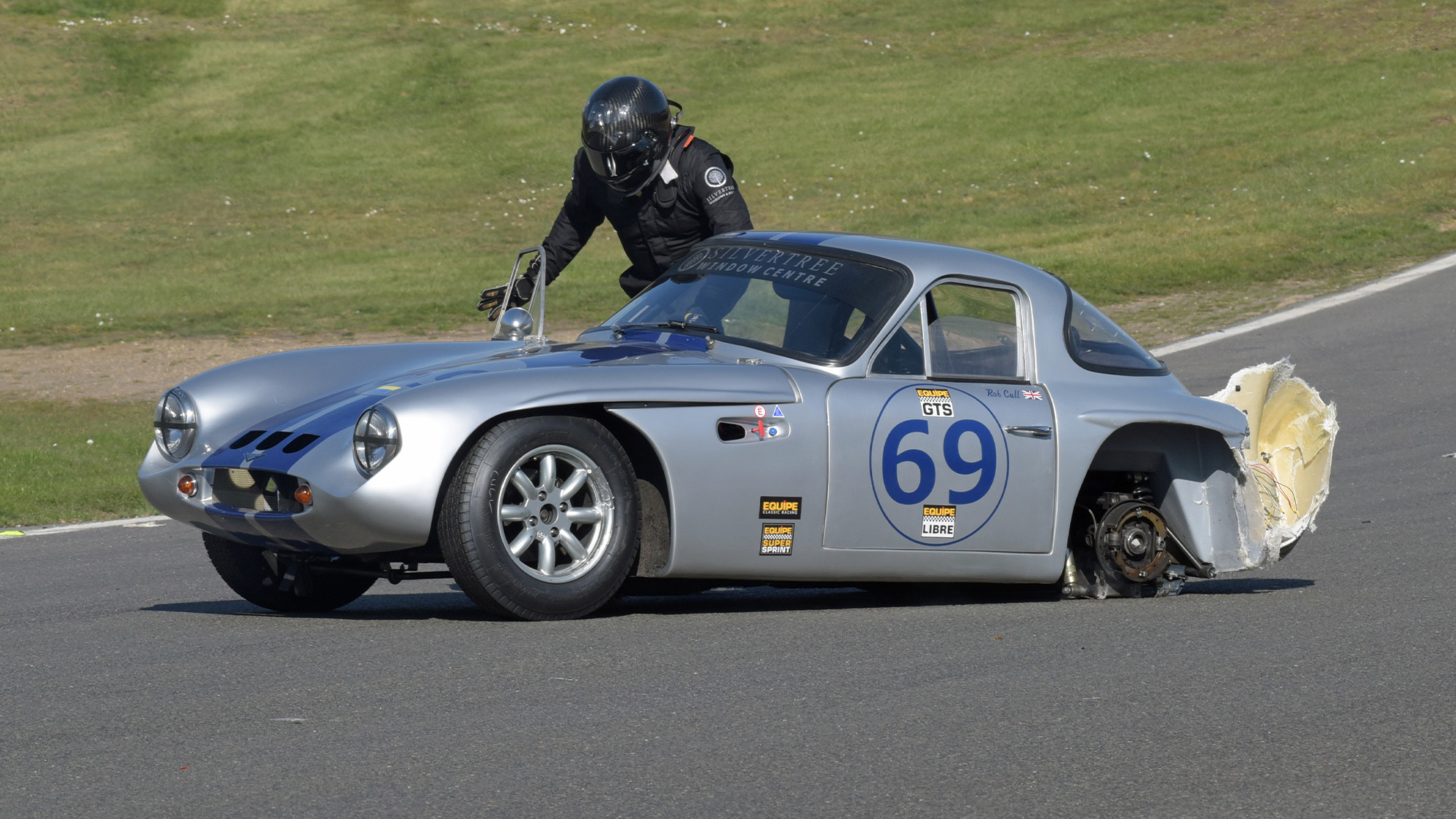 Rob Cull abandons his TVR Grantura after shedding a rear wheel in practice. He bounced back to finish second in one of the Equipe GTS races and fourth in Equipe Libre 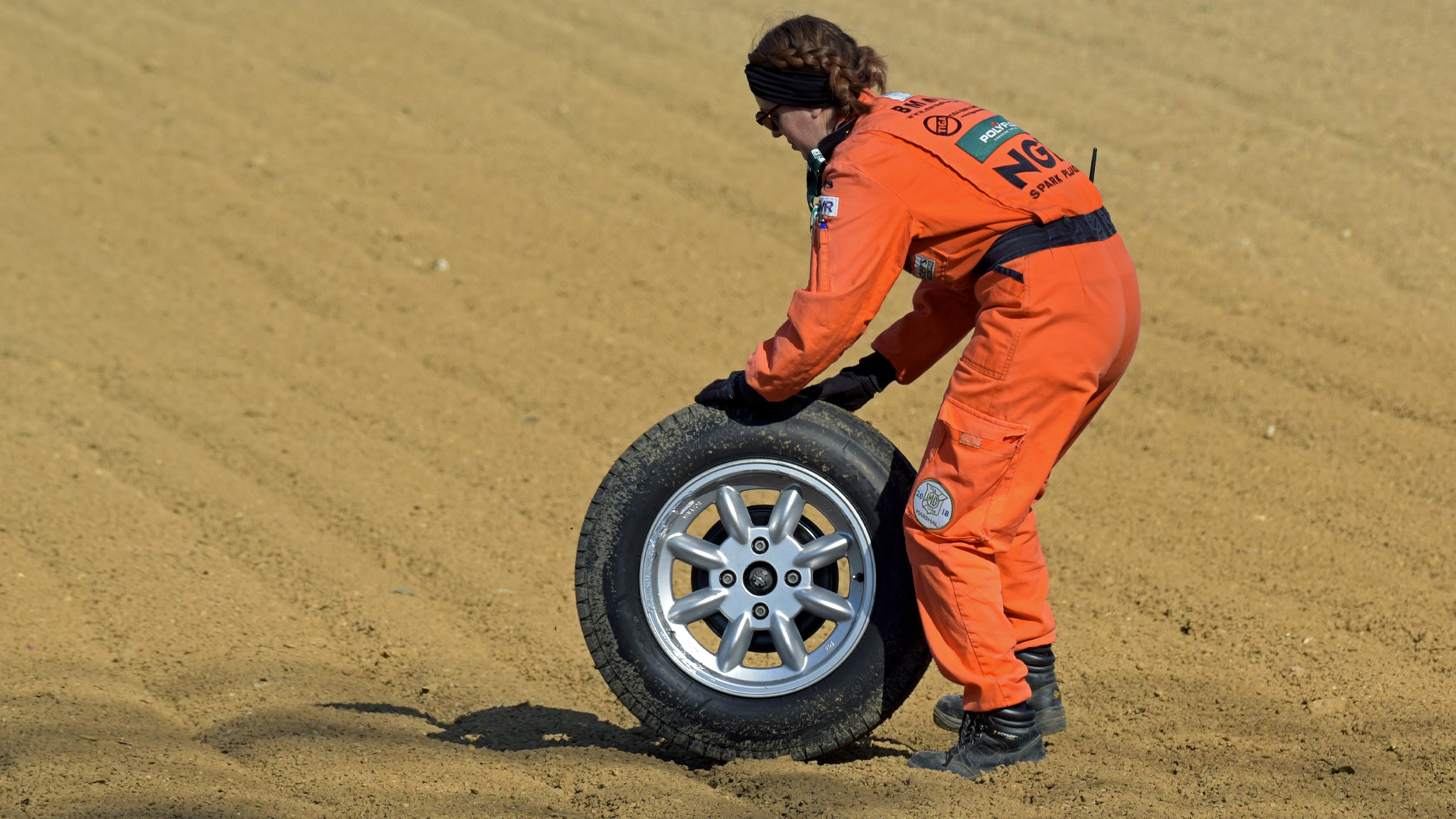 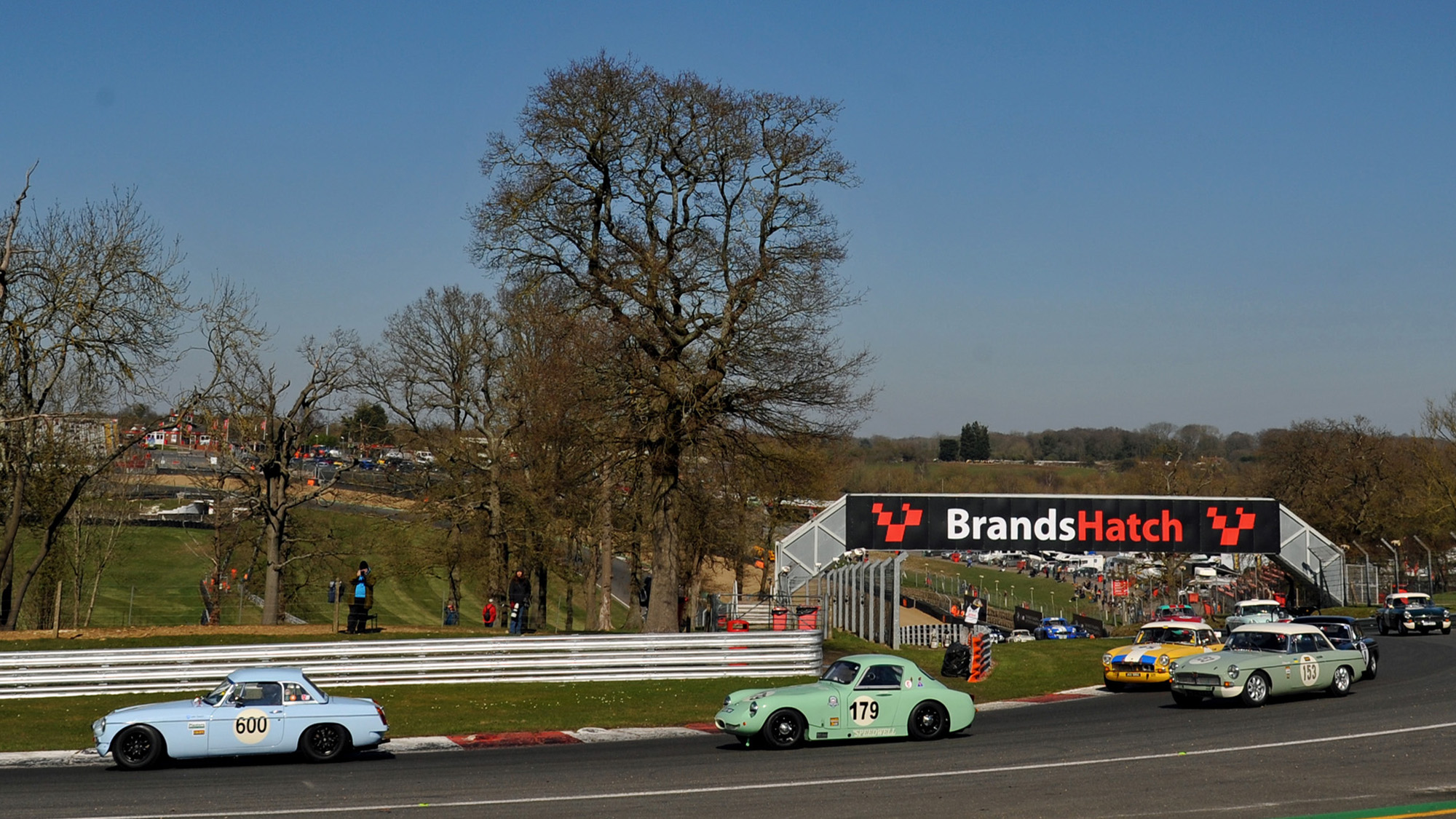 And credit to all those who worked on Rob Cull’s TVR Grantura after it shed a wheel during the morning, taking a section of the rear bodywork with it. That, too, was declared race-fit, thanks not least to copious use of tank tape.

Kudos, too, to Tom Smith, who scored a GTS victory and managed to make a real nuisance of himself during the early stages of the Equipe Libre race, getting his MGB alongside eventual winner Alex Causer’s Lotus XI until reality bit and he slipped back a few places before eventually retiring.

A worthy cameo, all the same. 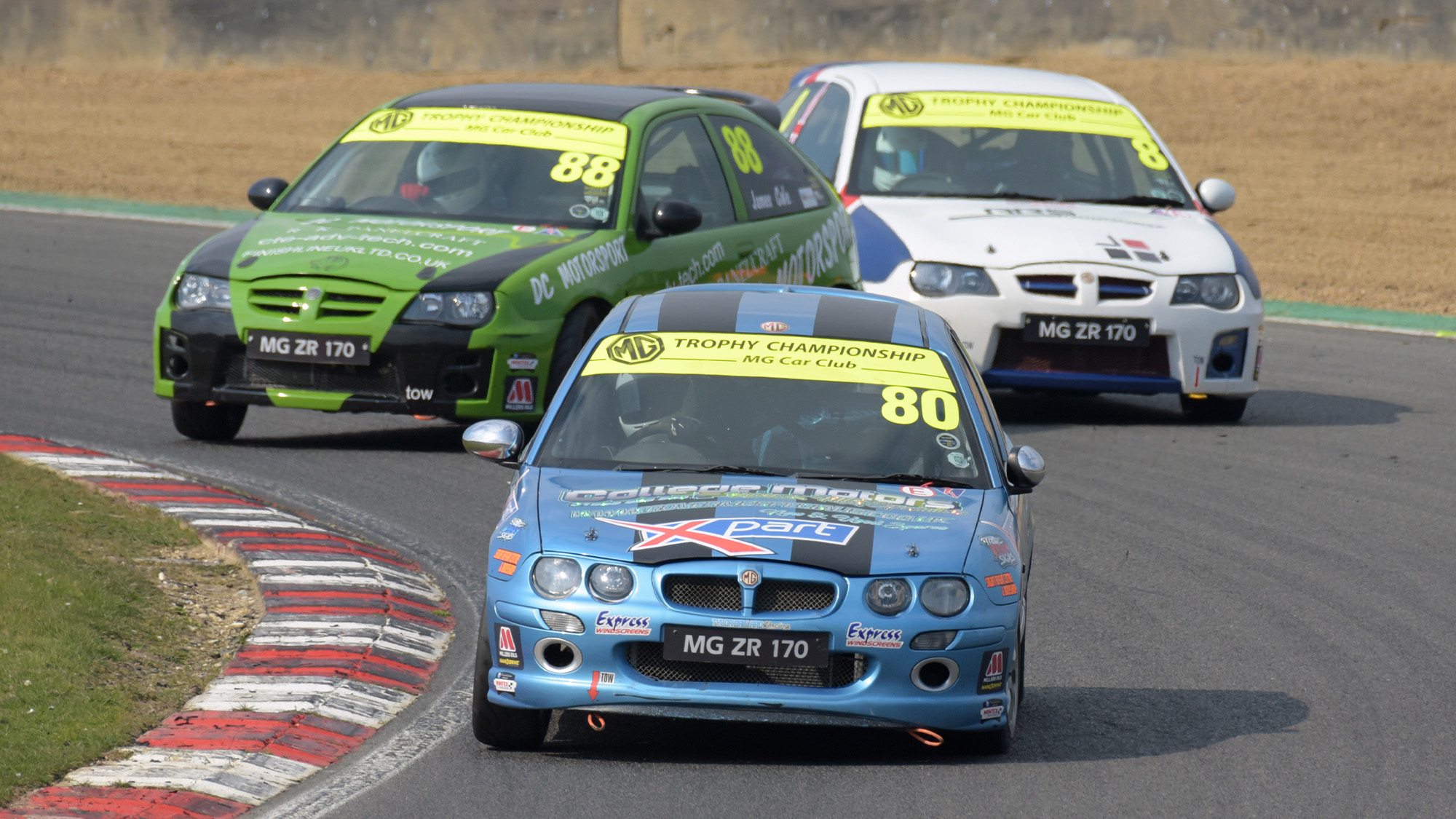 Save of the day: the MG ZRs of Tylor Ballard, James Cole and Jack Chapman take different approaches to Paddock; despite appearances, Cole didn’t spin

You could have been forgiven for thinking you’d turned up for the second part of a two-day meeting, as a fleet of MGBs had moved out to be replaced by, well, lots more MGs, albeit of a slightly more contemporary persuasion in some instances. There seem to be almost as many MG ZRs in contemporary racing as there are Ginettas…

This was a busy couple of days for the sport – Sebring 12 Hours, Bahrain Grand Prix, Texas Indycar, MotoGP in Mandalika, Atlanta NASCAR and doubtless several other things I’ve missed (as a friend of mine put it, “Carlsberg doesn’t make weekends, but if it did…”) – yet meetings such as this are to my mind a match for anything in terms of simple competitive pleasures. 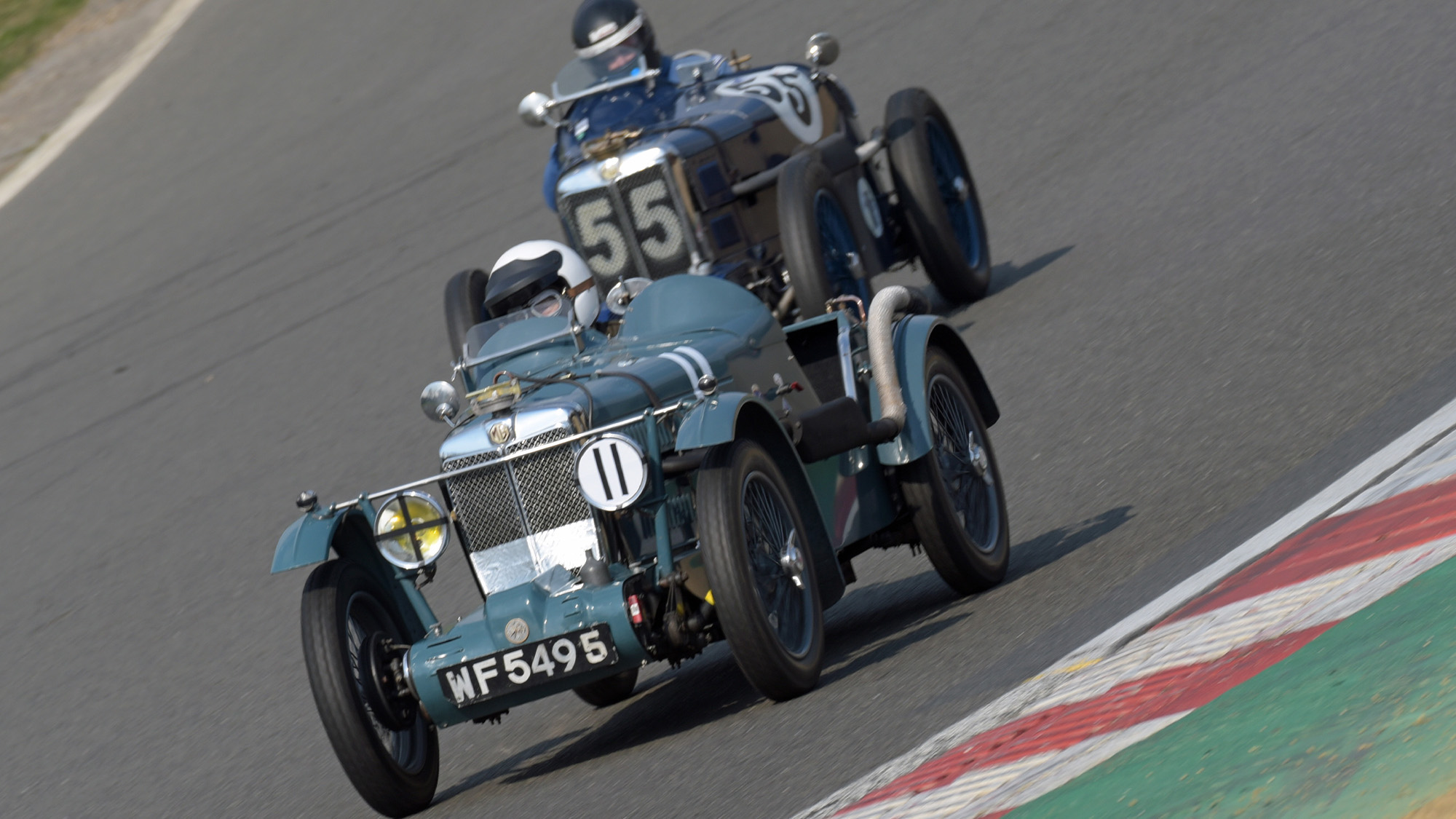 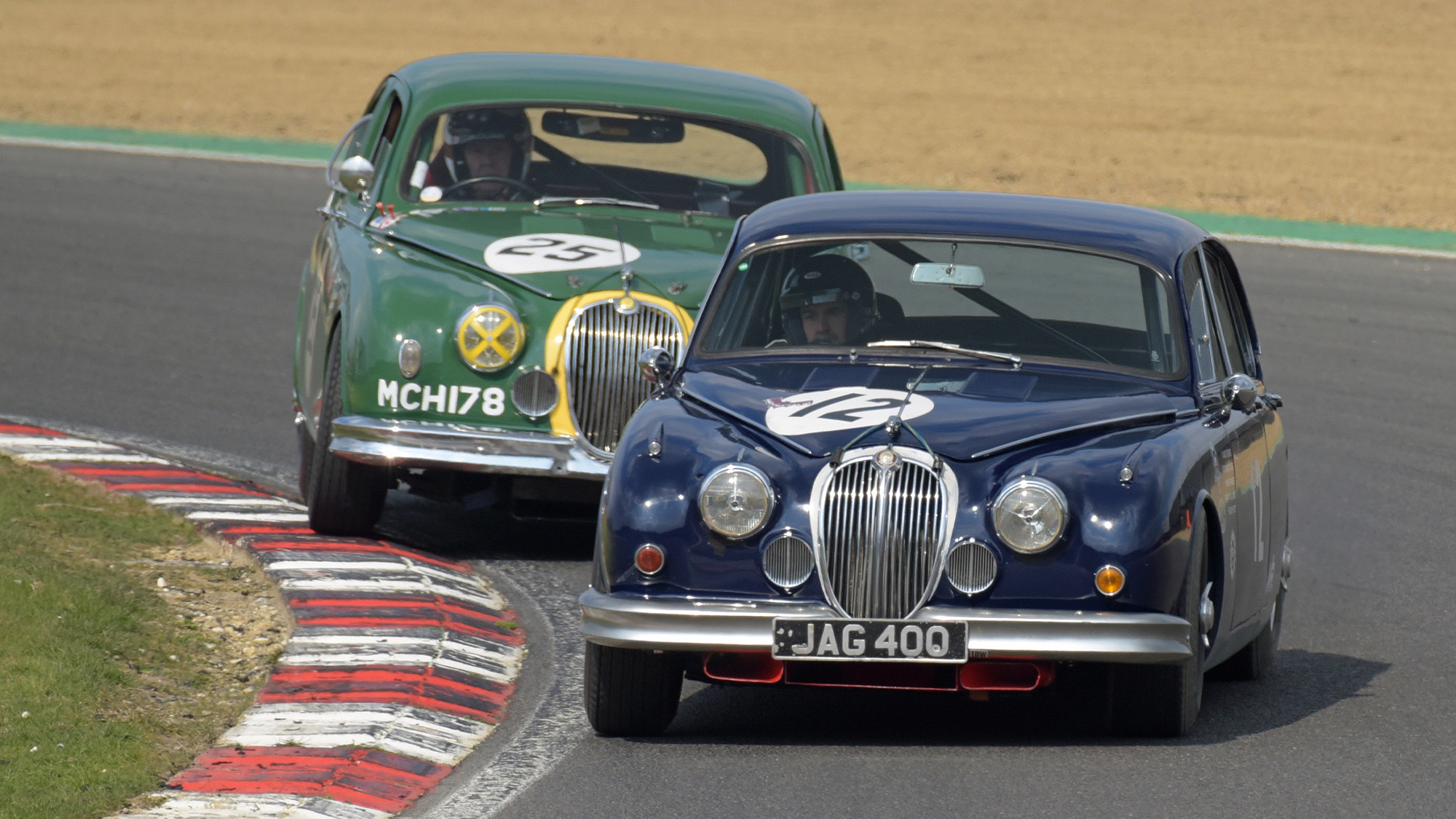 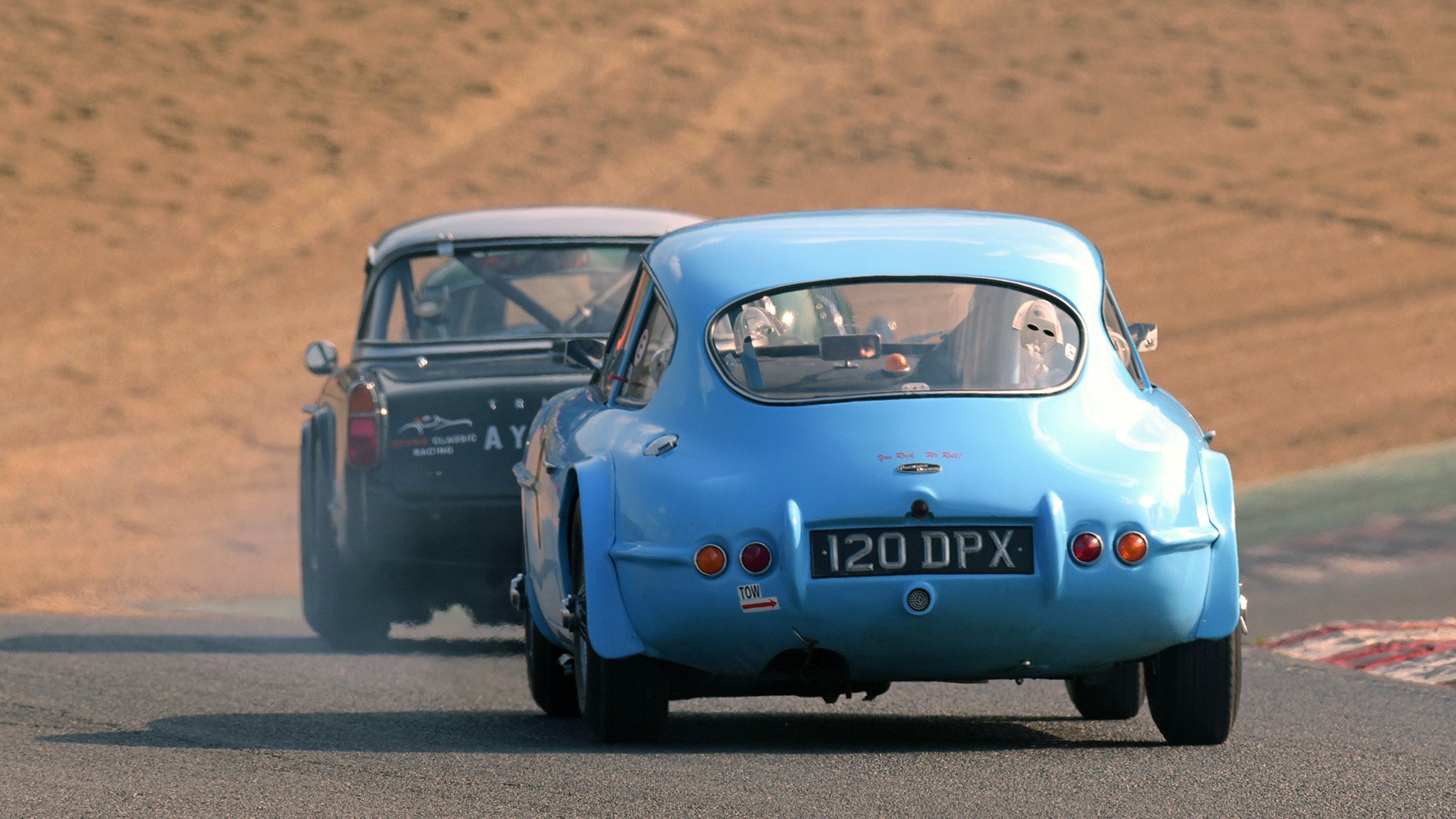 The body language of the leading Jaguars in the Ecurie Classic race (Grant Williams’s Mk2, the John Young/Nigel Webb Mk1) was wonderful to behold, particularly when running together, the pair of them worshipping at the altar of suspension movement. Williams dropped to seventh as the consequence of a safety car jumbling the order, but fought back to win.

It’s always uplifting to see a posse of modsports-spec Midgets and Sprites – a pleasing glimpse of 1977 – and there was an excellent battle for second place between Duncan Potter (Montlhéry Midget) and Fred Boothby (J2) in the first Triple-M Challenge race. 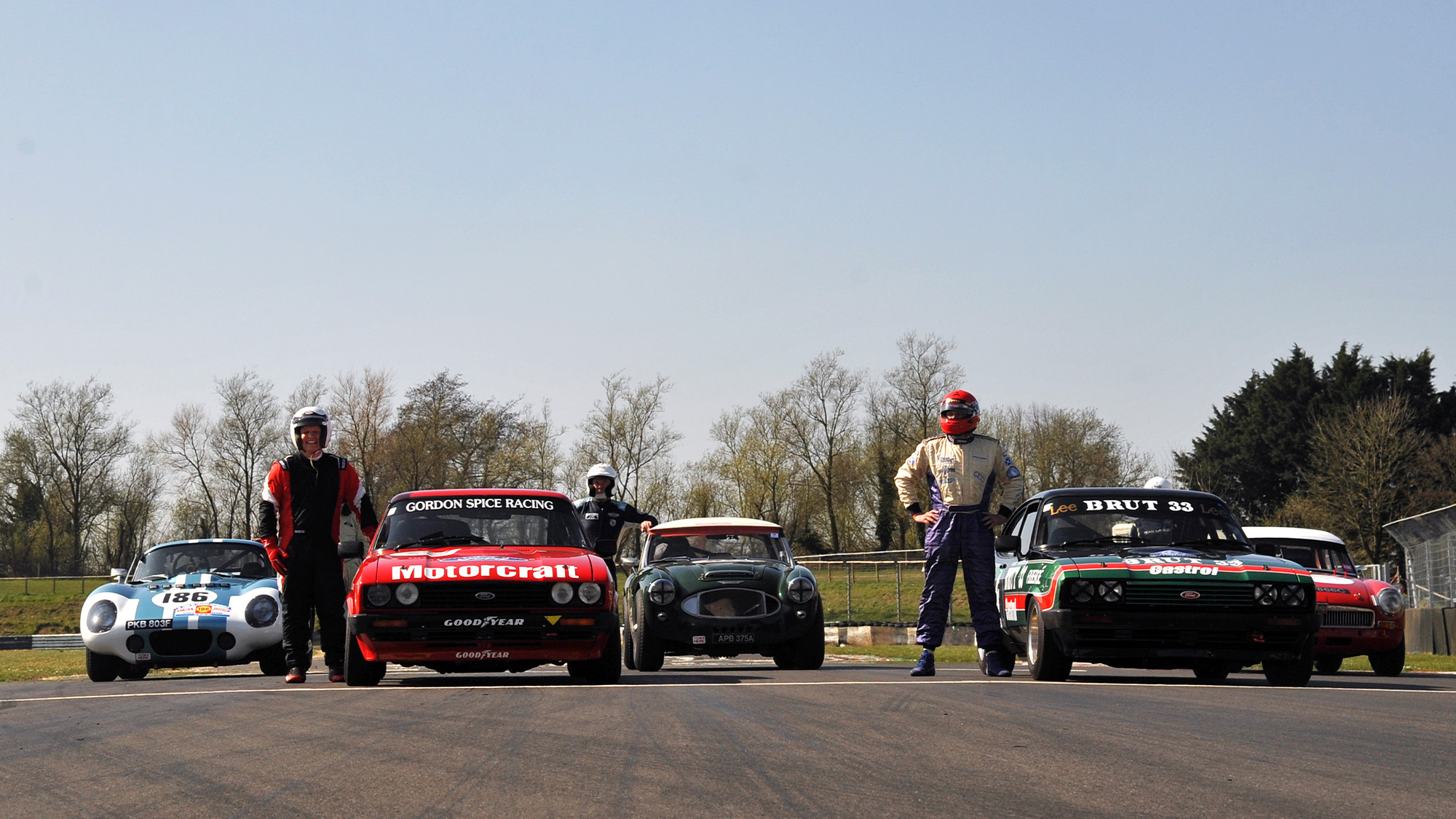 New line-up: Group 1 touring cars will feature at this year’s Autumn Classic, while the Castle Combe Racing Club will be organising the GT & Sports Car Cup for the first time

It had been more than four years I last visited Castle Combe – and almost 40 since first I did so, but its allure never changes. It doesn’t feel that far, either. My route across the south-east brings me to Junction 10 of the M4, which is almost Reading, which is almost Chieveley Services, which isn’t far from Membury, which…

Tune in to something comedic via BBC Sounds and the trip passes in a blink.

This wasn’t a race meeting, but a pre-season test and media day, a chance for the local Castle Combe Racing Club to promote this season’s 10 race meetings (the first on April 18, the last on October 1) and discuss its broadening range of activities.

Regional championships are nothing new, but in England Combe is unusual in that it still has a full set of them, catering for saloons, GTs, Formula Ford 1600 and hot hatches. This year, too, the CCRC will be working in tandem as race promoter of both the GT & Sports Car Cup and the two Mighty Mini championships. It was also an opportunity to confirm the addition of a Gp1 touring car race to the schedule at the popular Autumn Classic on September 24.

And you can never have too many Ford Capris… 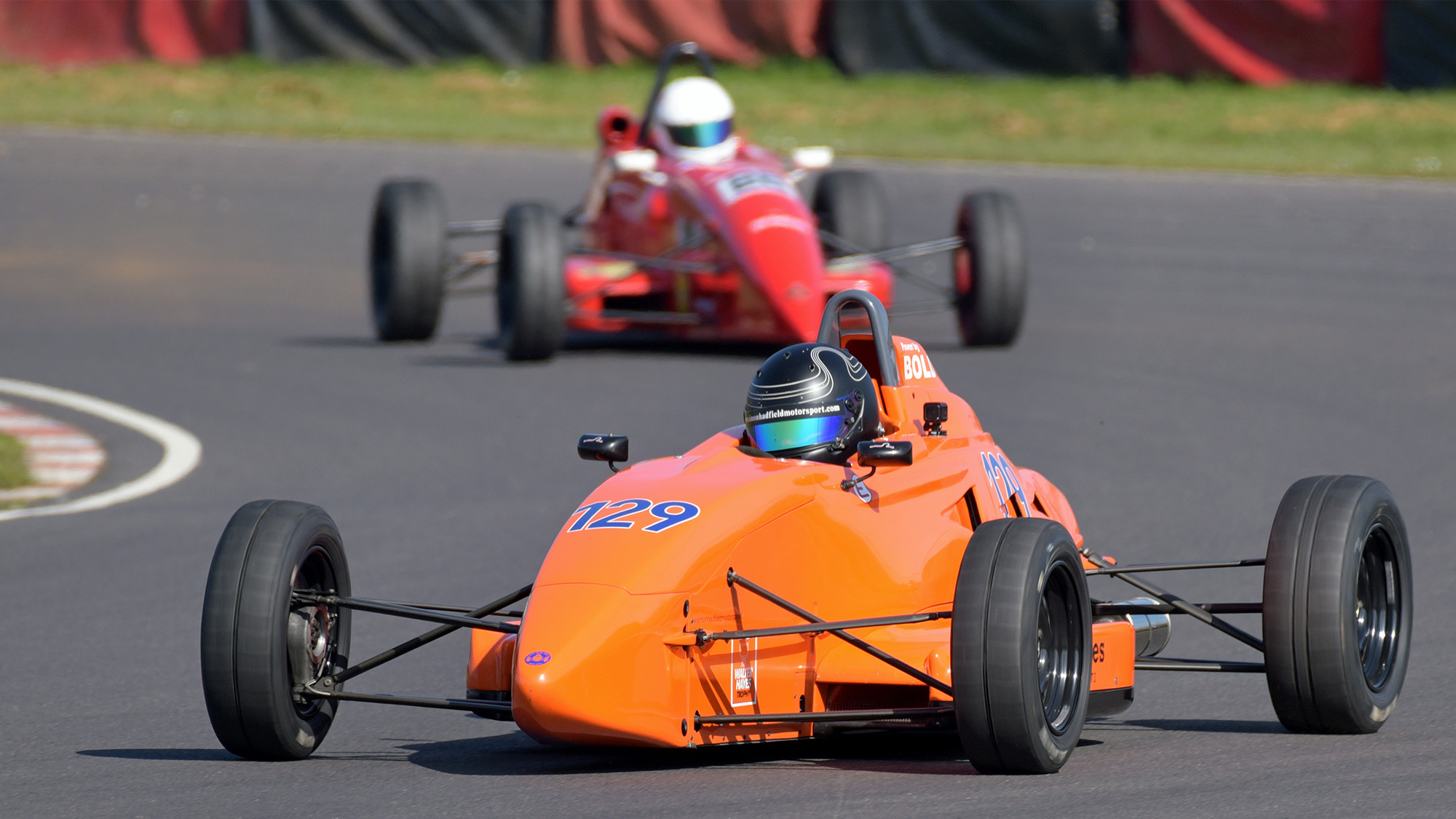 “I absolutely love coming here,” said historic racer and preparation specialist Simon Hadfield, helping to run his son James’s FF1600 Van Diemen using the old-fashioned method of van and trailer. “Whether you are talking about the gate staff, the caterers, the scrutineers or anyone else involved with the place, it’s always friendly and welcoming – just as motor racing should be.”