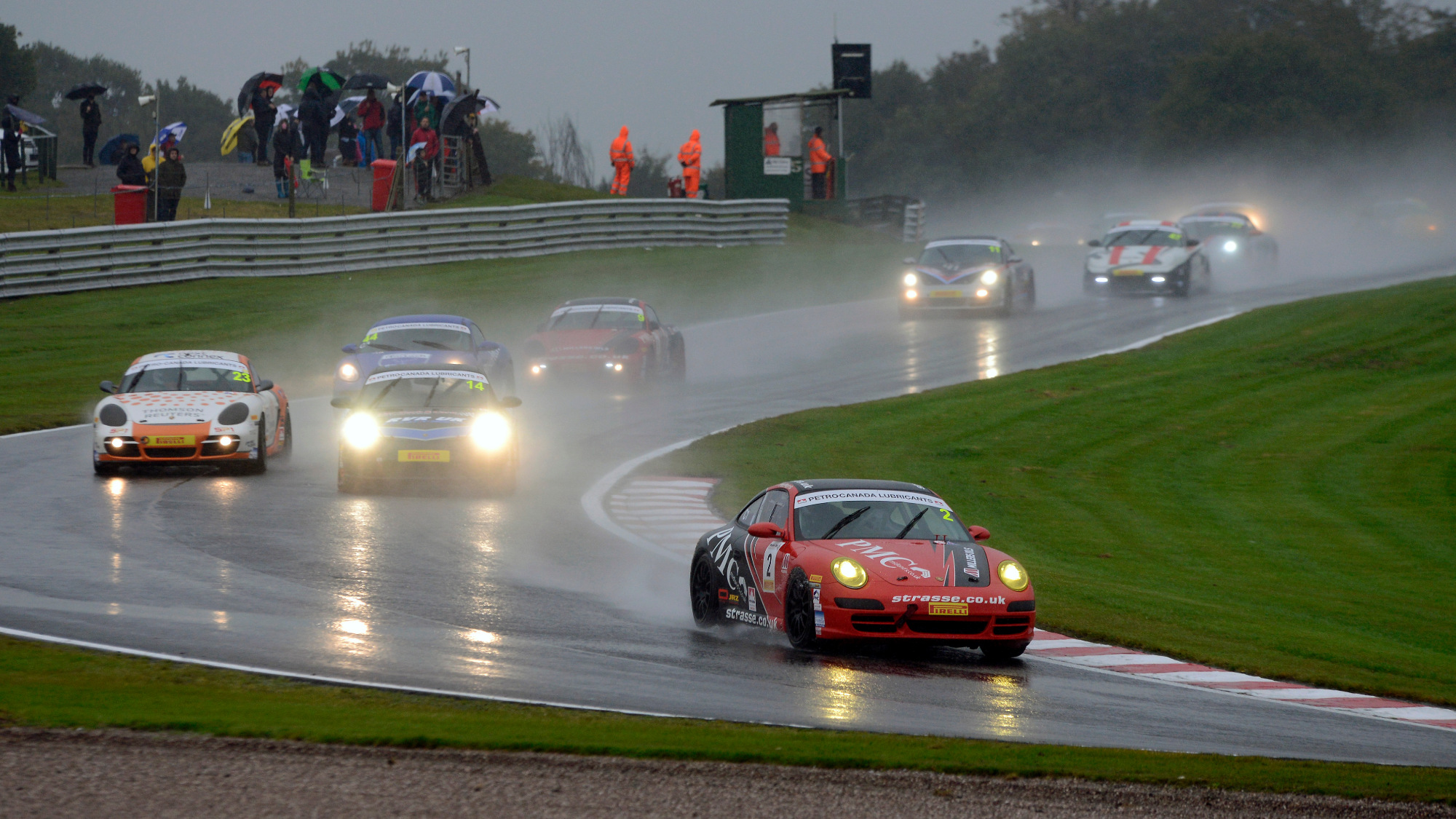 The start of what was an entertaining Porsche Club race

The feeling doesn’t change. Conditions had been miserable from the moment I peeled away from north-west Kent and remained so as I ambled through Little Budworth at the journey’s end, but I still get the same buzz driving into Oulton Park as I did when completing the trip by bicycle more than 40 years ago. If anything, the sensation had been heightened in this instance by almost a year of absence.

After 200 miles of dealing with dense spray and largely appalling lane discipline, there is a certain comfort to be had in parking up, dispensing a Thermos coffee and watching competitors rattle into the circuit with their traditional van-and-trailer combos. Some, indeed, are still racing the same type of car as they were when I started out as a cub reporter, covering local MG racers for the Altrincham Guardian (clue: this was when Margaret Thatcher first came to power and Nottingham Forest used to win European Cup finals).

Truly, the MG Car Club is one of the nation’s great competitive staples.

Barely had the day commenced than there was a lengthy delay, a Porsche Boxster having clonked the barriers heavily enough at Druids to take out several support posts. During this unforeseen intermission, the rain intensified, I received a message telling me that one end of my road was now flooded and it became apparent that my boots were no longer quite as waterproof as they were supposed to be.

In the circumstances, a lot of the action was more intense than it had any right to be… once things got going. Safety car starts were swiftly mandated and two slow laps at controlled pace seem to last an eternity when you’re watching in sodden socks, but you don’t notice such discomforts once racing is in progress. Or perhaps that’s just me…

Mark McAleer won a lively Porsche Club opener, curtailed slightly prematurely after Chris Dyer fell victim to a pit-straight puddle and aquaplaned into the wall, and victorious others included Jack Ashton (twice, in his Metro), Fred Burgess and Ross Makar (MG Trophy) and James Wheeler (MGB GT, in the enduring MGCC BCV8 Championship), but the rain never once abated and the meeting was eventually abandoned with three races still to run.

I had stopped taking photos some time beforehand, for the simple reason that rain had beaten my waterproof covers, interfered with Nikon electronics and caused one of my camera bodies to pack up; I didn’t want the second to suffer the same fate.

But I was back at Oulton Park and, irrespective of anything else, that made it a good day. 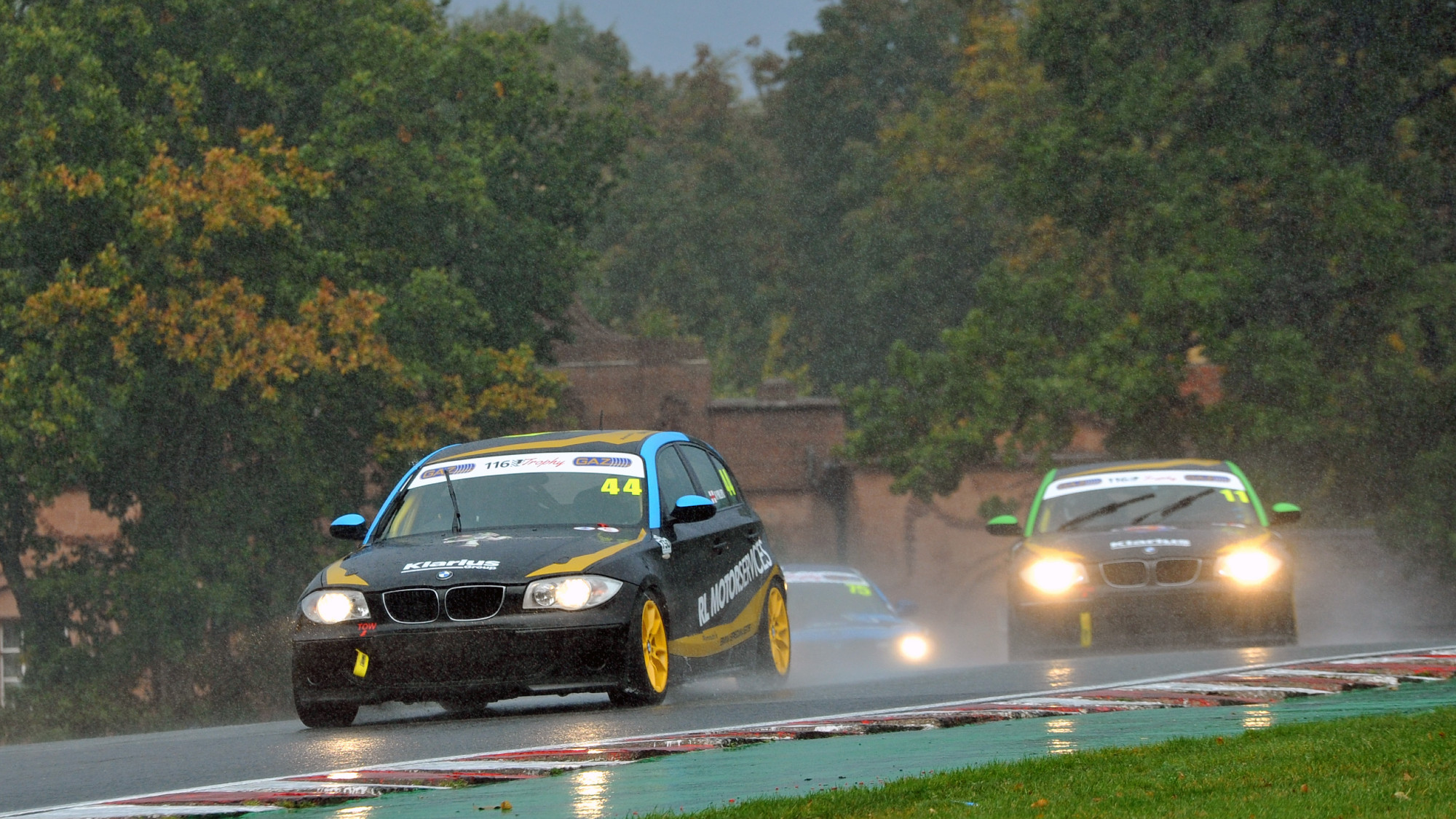 Richard Phillips in the 116 Trophy Race at Oulton Park

This was exactly the kind of morning that justified purchase of a 10-year-old Peugeot cabriolet as an everyday car: crisp, bright and inviting. At 4am it was time to drop the roof, don fleecy hat, set cabin heater to ‘toast’ and make one’s way through empty London suburbs ahead of a star-spangled meander up the M40 and beyond, with a 1970s soundtrack conjured by Spotify.

The contrast with events seven days beforehand could hardly have been greater… until I reached Bunbury, about seven miles from my destination, whereupon it began to rain once again. And then some. All of a sudden, there was also a wind chill factor of minus several. Three days after finally persuading my malfunctioning Nikon to behave, I was about to test its patience once more…

In keeping with 750 Motor Club traditions, the entry was vast. As with the MGCC event a week earlier, however, one wonders why meetings such as this are staged on the Island version of Oulton. The full, 2.69-mile circuit is a thing of magnificence, but when that isn’t used, clubbies such as this would surely be better staged on the shortest Fosters layout. It is rarely pressed into service nowadays but is easier to manage, generally promotes closer racing and includes a properly challenging right-hander after the fast, off-camber sweep through Cascades. Instead of this, the Island track provides a couple of straights and a simple hairpin (although one or two Toyota MR2 drivers seemed to find the latter a bit of a hurdle).

A tip of the hat to Murray Shepherd (who picked visibly different lines to most of his Locost rivals and twice vanished over the horizon), Aaron Cooke (who picked up a brace of MR2 victories), Andy Hiley (likewise triumphant in both Sports Specials races) and, particularly, those who volunteered to officiate in the rain for the second time in as many Saturdays.

At the time of writing, my boots still aren’t properly dry… 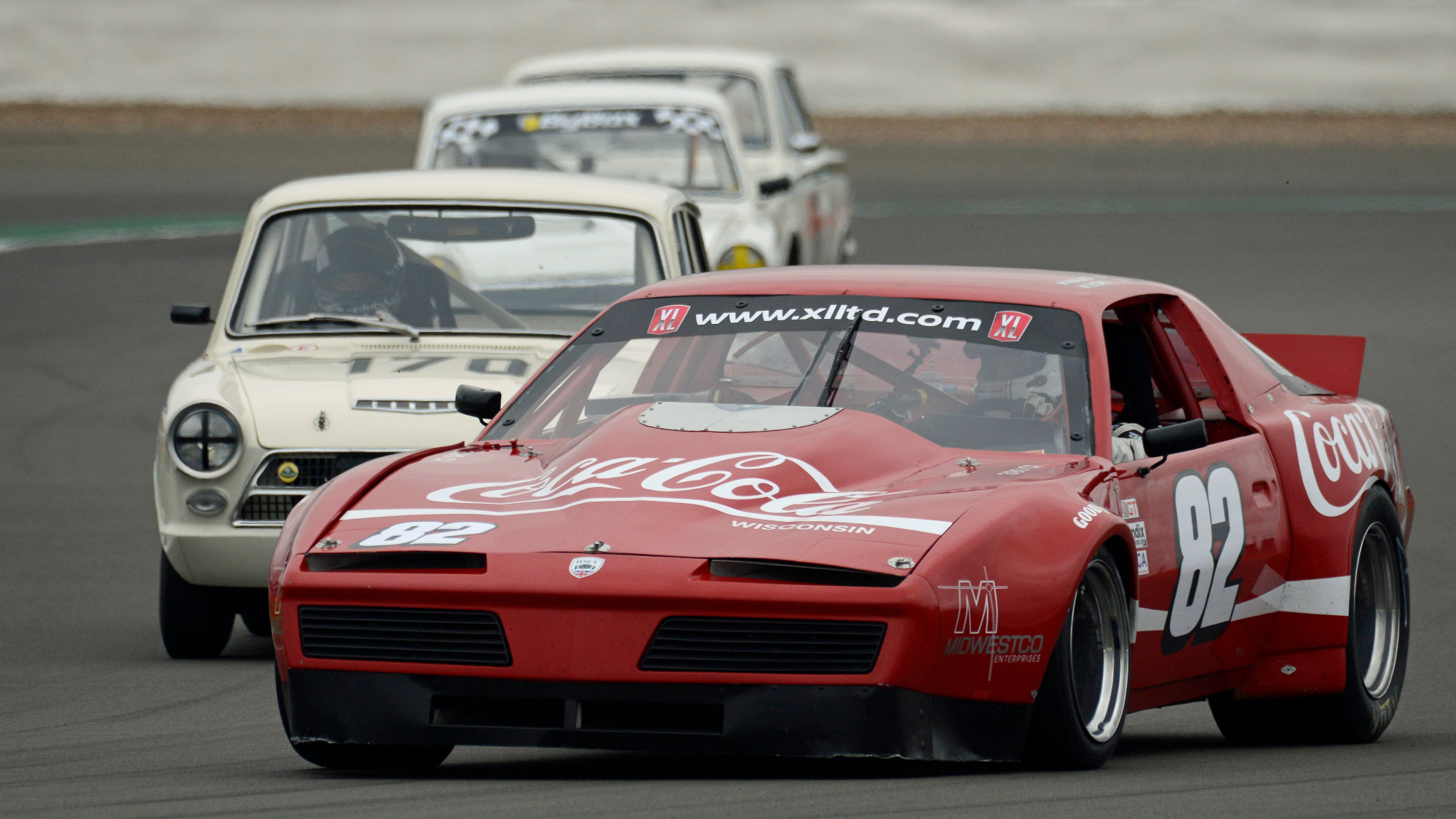 Alistair Fazekas at the wheel of his 1980s Pontiac Firebird

Had this been an ordinary year, one might have questioned the wisdom of staging the annual HSCC Finals at the same time as the Goodwood Speedweek… but then in normal circumstances, the latter would not have existed. As it was, both events took place behind closed doors – so potential spectators had no choice to make – and there wasn’t enough of a category clash to make an appreciable difference to the entry.

Silverstone would to my mind be a better place if its old, more or less triangular club circuit existed still, but this felt like a morning of old – cold and misty, with the sun making half-hearted attempts to breakthrough. There were also a fair number of participating drivers who raced here long before evolution kicked in, not least Ray Mallock, who won both Formula Junior races at the wheel of his stubby – but lovely – U2 Mk2.

A splash of contemporary reality came in the form of a precautionary Covid temperature check at the main gate; a colleague informs me that he failed one of these earlier in the year, having driven to the venue with his car’s heater at full pelt, though he passed at the second attempt after spending a few minutes in fresh air…

The Historic Touring Car Championship entry was decent, at 25 cars (which again raises the question of why only nine went to Cadwell in August). Most interesting – and least appropriate – of their number was the 1980s Pontiac Firebird of Alistair Fazekas, which looked odd alongside Vauxhall VX4/90, Austin A105 and suchlike (it ran in an invitational class all its own as the driver sought to collect licence signatures). Twice he started at the back and scorched through to fourth within a handful of laps, but on both occasions that’s where he stayed.

Bagging a podium finish would doubtless have been considered poor form. 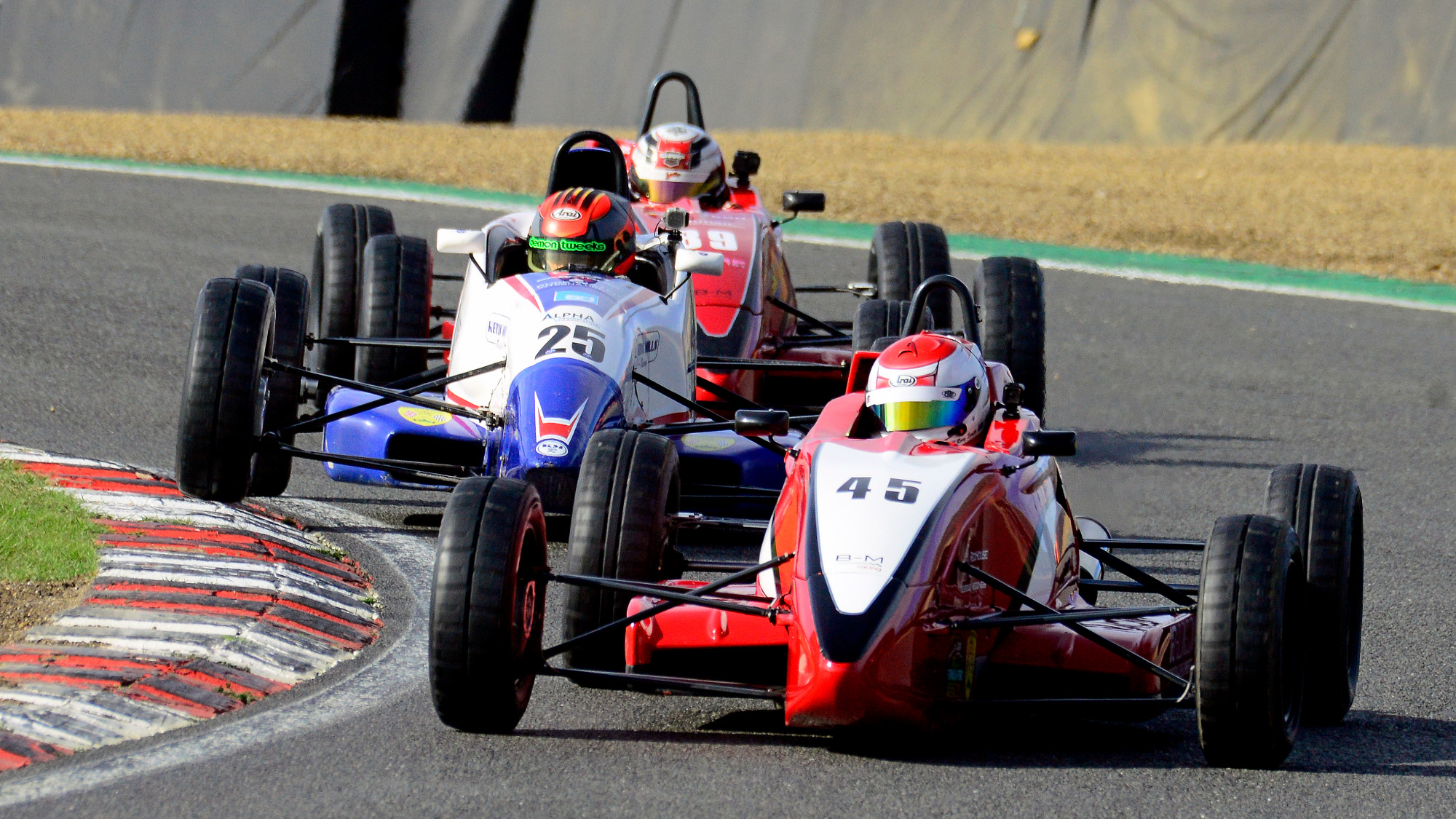 Rory Smith heads up Neil Maclennan in his Medina

Despite what it said on the tin, this could just as easily have been christened the Mazda MX-5 Festival, for there were almost 90 of those in the paddock – 53 of them Mk1s, fractionally more cars than were entered for the headline event.

In light of current travel restrictions – and the fact the UK government doesn’t seem to understand its own rules, which rather complicates things for everybody else – it was no surprise that the entry was down on recent years (at about 25 per cent the level the Festival attracted at its peak), but the Team USA Scholarship racers made their welcome annual pilgrimage.

In reality the three heats were fairly pointless, as every starter was guaranteed a place in the semi-finals, and the competition was far less frenetic than usual, not helped by yet more lashings of rain (this time courtesy of Storm Barbara). Only in the grand final did the intensity increase by a notch or two, Jonathan Browne’s hopes of a second straight festival victory being dashed when Rory Smith squeezed ahead just after half-distance.

Most entertaining performer on the second day was arguably Tom McArthur, who is usually seen contesting National and Northern FF1600 Championship events in a 2010 Van Diemen but has recently been out in a Simon Hadfield-prepared Merlyn Mk20 of somewhat older vintage. On Sunday he spun into the Paddock gravel during the green-flag lap ahead of the HSCC Historic FF1600 race, then started from the pit lane and shot through to fourth (which is where he was supposed to have lined up).

In the Historic Festival, which caters for rather newer cars than its HSCC counterpart, he fought for the lead before eventually taking third, less than four-tenths behind winner Peter Daly. He then won the last-chance race, again beating rivals in far younger machinery, which put him 25th on the grid for the main race. Progress in that was a little more sedate, but he still finished 16th.

Such are the details that make this such an engaging event, no matter how much it might have changed since its pomp.