National racing round-up from September 2021: Is a sausage and jalapeño bap the perfect way to commence your sporting day? Discuss… 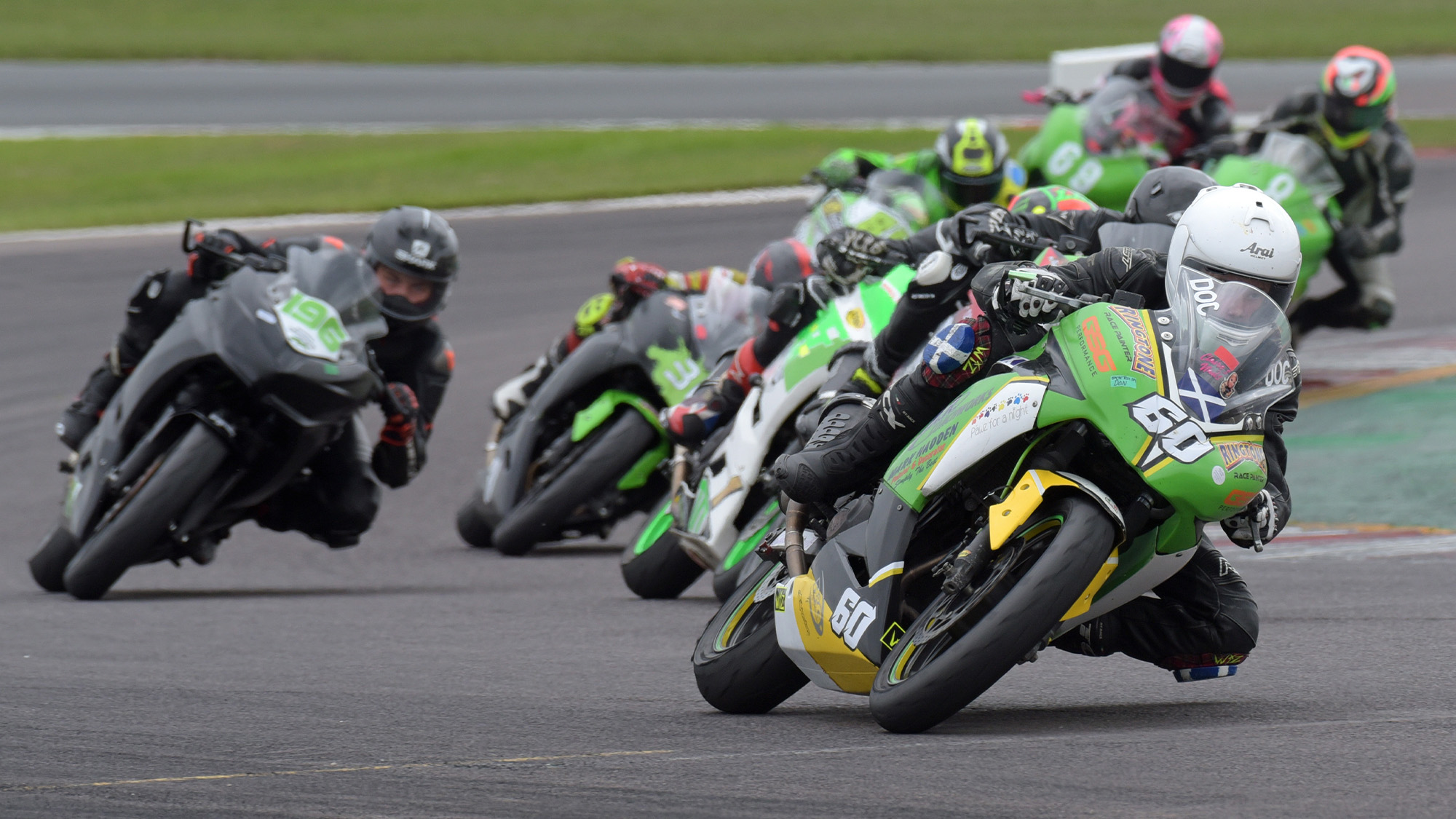 Paddock breakfasts have always been a thing of wonder, but the goalposts have just shifted with the addition to the Garage 39 restaurant menu of jalapeño peppers as an optional extra – the initiative of recently appointed circuit manager Andrew Swift. If you happen to be feeling a bit weary after 90 minutes on the M1, plotting a course around the absence of lane discipline that remains a national disease, a fresh roll lined with sausage and jalapeños is a good way to clear your head.

It was a busy weekend for motorcycle racing, with BSB action at Snetterton, two days of BMCRC combat at Donington and an EMRA clubbie at Mallory Park. A mate of mine had also convinced himself there was a meeting at Darley Moor, half an hour down the road, but arrived to find he was a week too early and so came here instead. Despite the calendar congestion, though, all events attracted strong entries – and the BMCRC paddock was absolutely rammed with vans, from which owner-riders wheeled their bikes to and from the scrutineering bay, the lucky ones assisted by a mate or two.

This is a world of the self-sufficient, rather than the self-possessed.

As practice crackled into life, there were precisely four spectators savouring the sweeping views available from the grandstand behind Redgate – it’s nice to know there are still folk who are every bit as obsessive as I was 40-odd years ago (and still am, come to that). 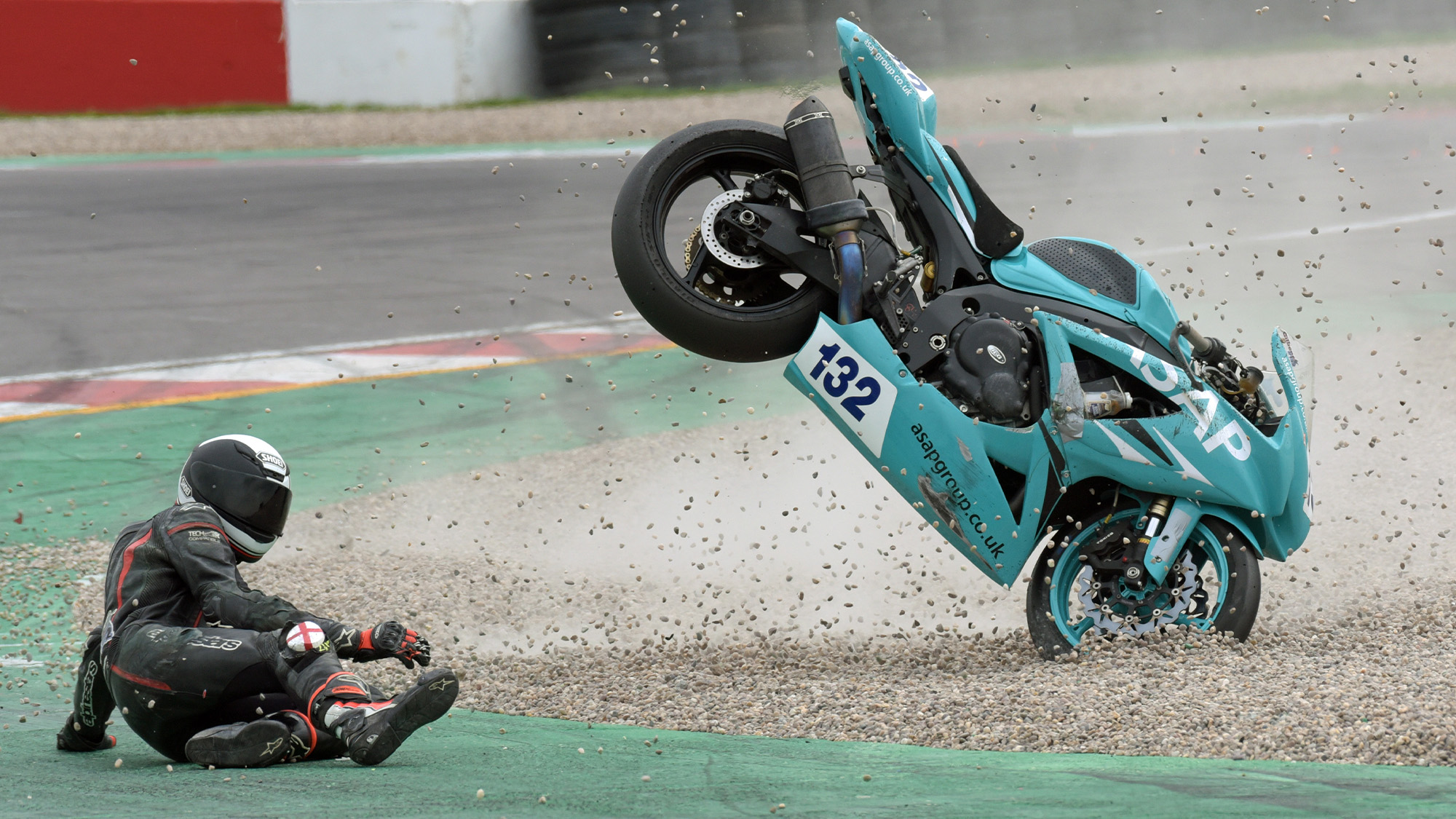 Mitchell Gilbert and his Suzuki go their separate ways at the chicane after a tumble. He was unhurt 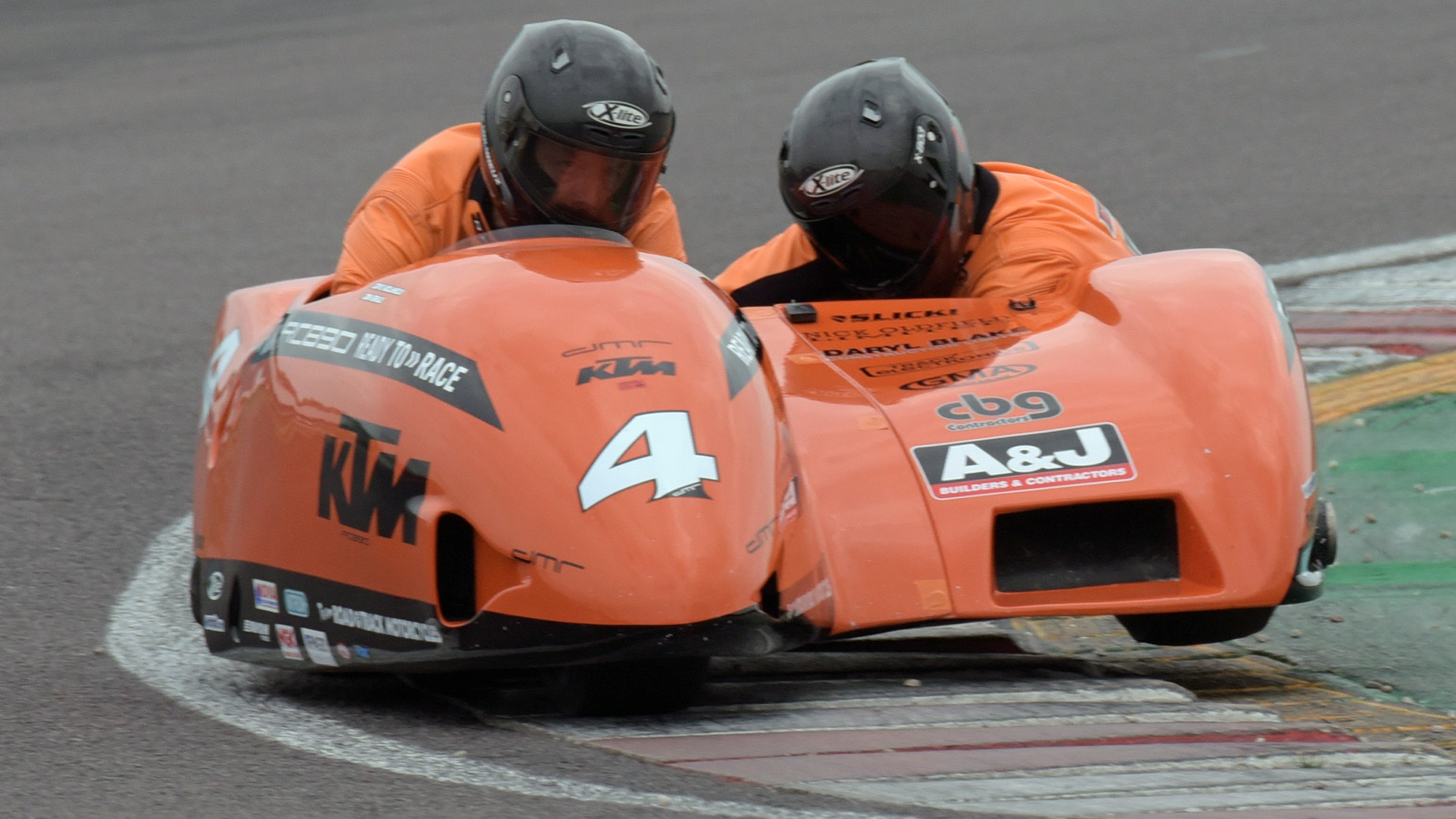 Partnered by Dan Sayle, Isle of Man TT sidecar legend Dave Molyneux was on good form with his KTM

As ever at national-level bike events, the racing was a treat, partly because of the extent to which the laws of physics were constantly challenged, partly through competitive proximity. There were seven MZs and a bunch of exhaust fumes contesting the lead in one race.

Domestic motorcycle racing is in rude health, but one question remains. If anybody can explain why there was a volley of loud music coming from one of the observation towers about Craner Curves – mostly rave, but with a bit of AC/DC thrown in – I’d love to know. 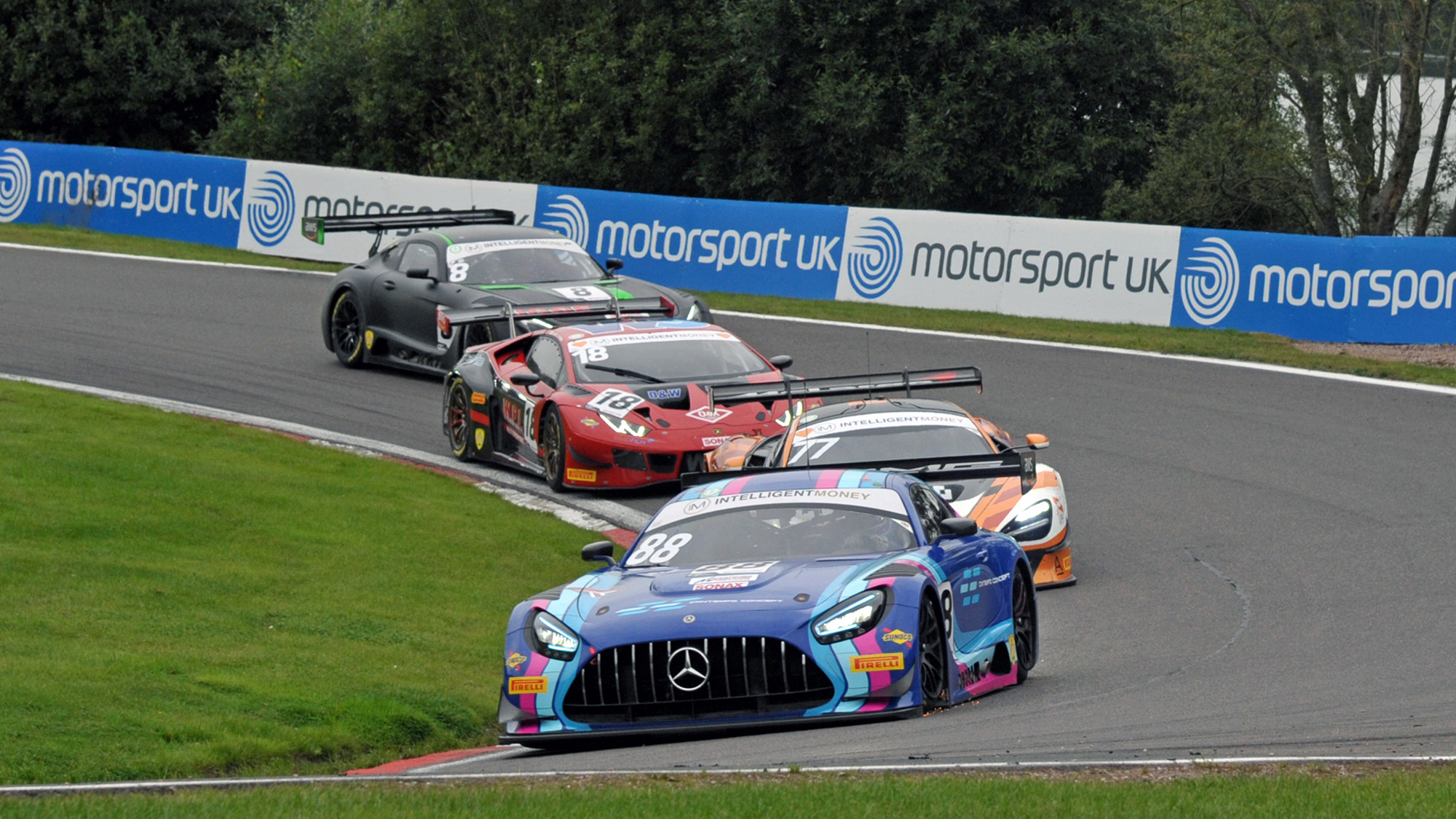 Kevin Tse (RAM Mercedes) under pressure during the opening phase of race one, which he and Tom Onslow-Cole subsequently won

Shifted from its traditional Easter slot for pandemic reasons, this is always among the highlights on the national racing landscape. And while there might be a slight degree of Oulton Park bias at play here, the circuit’s dips, twists and narrow confines particularly suit the brutal majesty of a modern GT3 car (see also Brands Hatch).

On Saturday morning, though, the first thing I heard was not the pulsating rumble of a Lamborghini Huracán V10, but a bloke in a toilet cubicle, chatting into his mobile phone about the need to strip down a crankshaft…

For a meeting of this stature, some of the support action was weak. GB3 (né BRDC F3) remains dependably strong – and it will be interesting to see what happens next year, when it is joined on the GT package by GB4, a direct rival to the FIA F4 series with what are likely to be significantly reduced running costs. National FF1600 is still well supported, too, and rarely provides anything but hard, close racing, but a field of 10 Heritage FF1600 cars stretched around a lap the length of Oulton favours neither the sport nor the show. The Caterham field was a little thinner than usual, too, but that didn’t matter greatly when about 11 of them were involved in the lead battle during the opening race.

In truth, though, British GTs would be worth watching if there were nothing else on the programme. 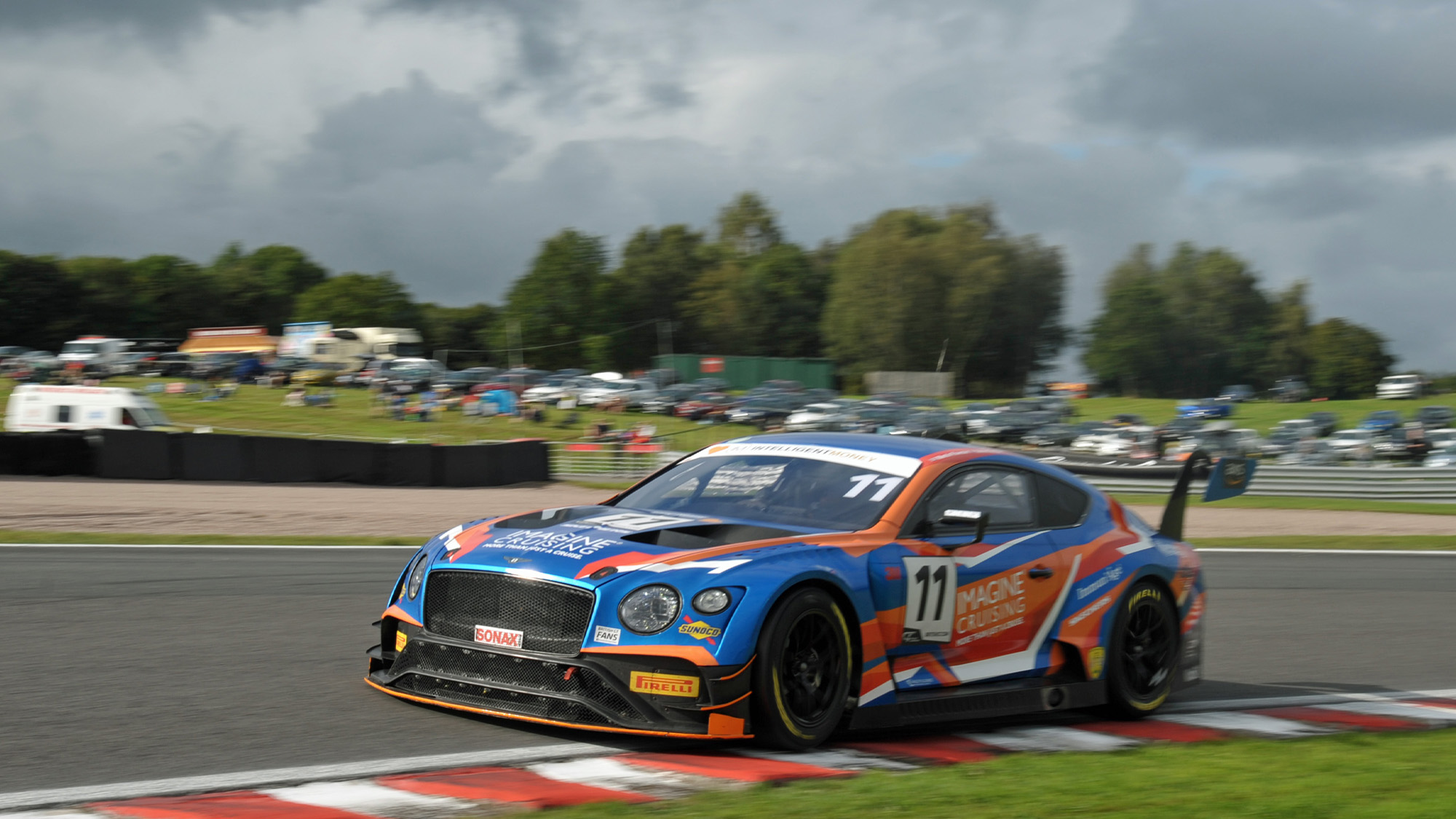 Kelvin Fletcher/Martin Plowman (Bentley) bagged pole for the first GT3 race and led the early stages, but eventually slipped to ninth – not helped by a penalty for track limits violations

Respect is due to Beechdean Motorsport, which mated the rear half of its Andrew Howard/Jonny Adam Aston Martin Vantage to the front section of an older chassis after Howard had a sizeable qualifying accident on the approach to Shell (aka Esso, for those of a certain age). It wouldn’t be competitive, but simply being in the races represented something of a victory.

With racing engines silenced by local byelaws before noon on a Sunday, the main action was short, sharp and, eventually, supremely soggy. Kevin Tse and Tom Onslow-Cole (RAM Mercedes) won the opening race, Michael Igoe and Phil Keen (WPI Lamborghini) the second, by which time the light was fading as a storm moved in.

Such things might temper average speeds, but in the British GT Championship they do little to suppress the spectacle. 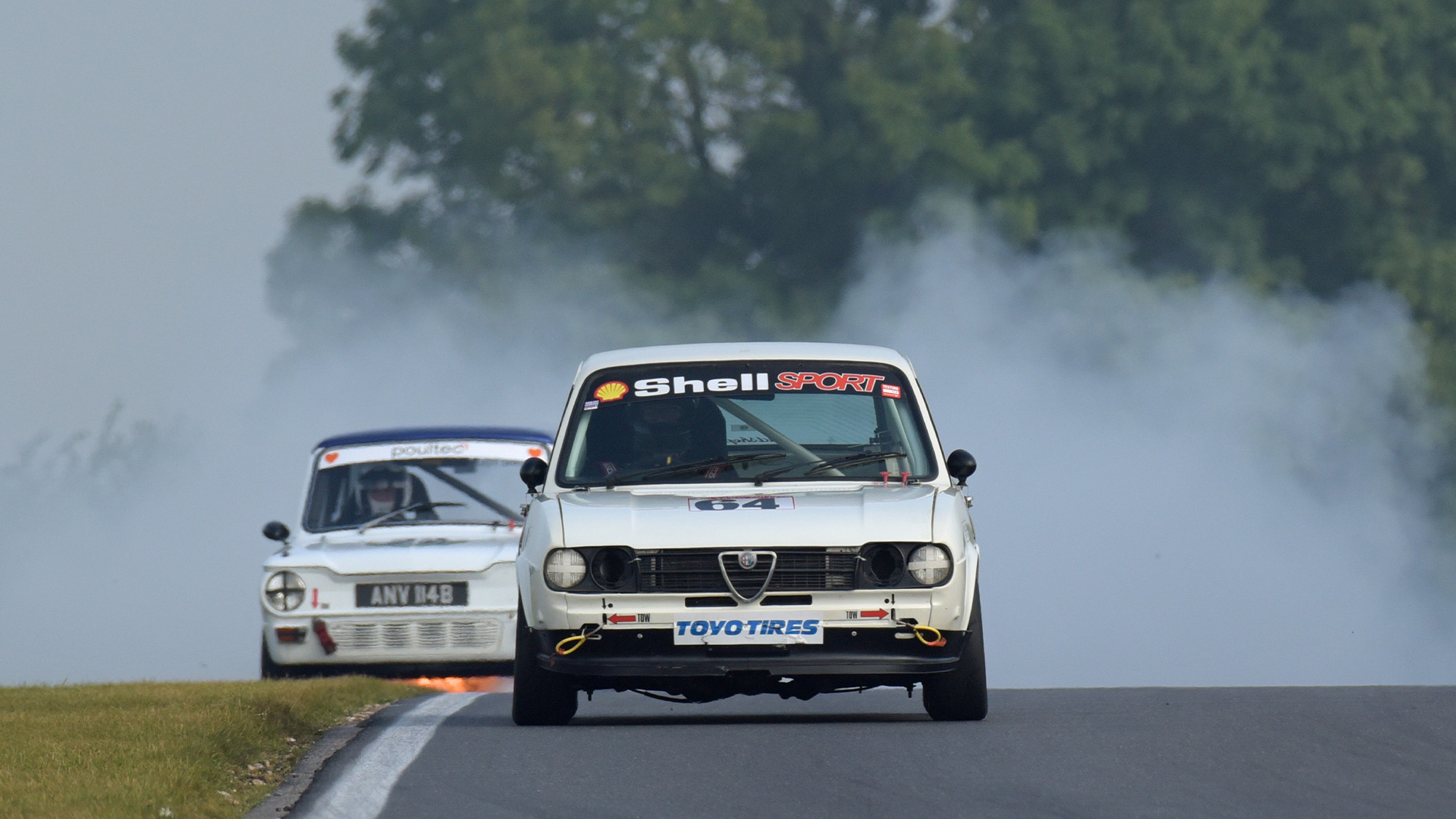 The crepuscular fog was dense – and the same might be said of some drivers, given how many were proceeding along the A11 without illumination. Snetterton, too, was cloaked in cloud – though it’s always a good start to the day when the first thing you see emerging through the paddock murk is a Hillman Avenger, a prime slice of 1974.

Despite the conditions, action began only a few minutes late – but barely had the fog lifted than an Alfasud appeared on the horizon with dense white smoke trailing behind. The lazy assumption that this was simply a ’Sud behaving as they do, though the victim – tucked in behind – was actually Michael Loveland’s Hillman Imp, which holed its block with the day still in its infancy. 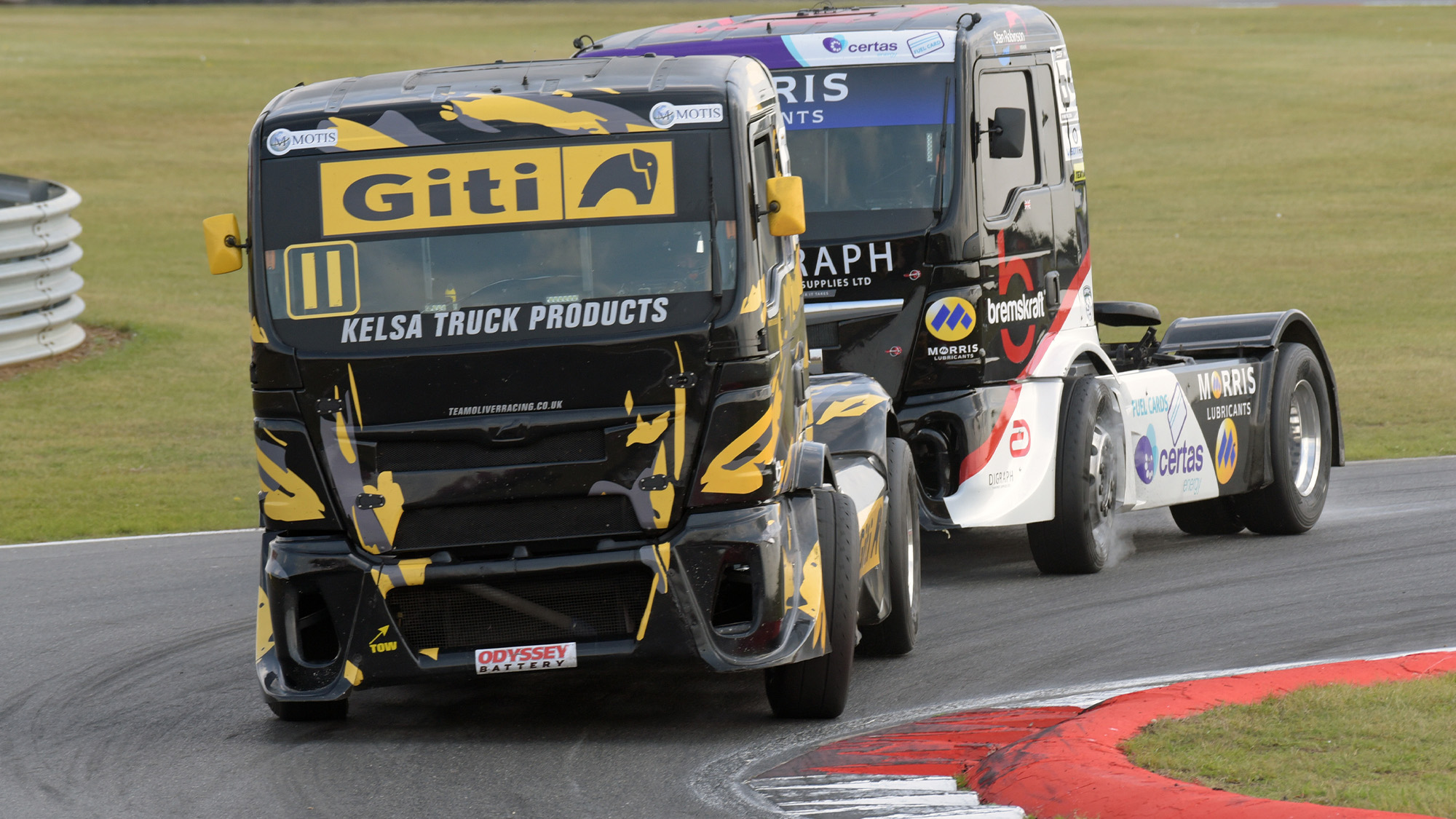 Martin Gibson leads fellow MAN racer David Jenkins during the opening truck race, in which he took the first of his two victories over the weekend

The Classic Touring Car Racing Club’s various classes embrace great depth and diversity, from the cars mentioned above to a BMW 325 Touring via Chevrolet Camaro, Triumph Dolomite Sprint and whatever the collective noun might be for Ford Anglias, but headline event was the fourth of this year’s six rounds in the British Truck Racing Championship. After clearing the trackside area, from which marshals and photographers are prohibited when leviathans are at large, I shifted to the lofty embankment that borders the approach to Riches and offers good views across much of the circuit. As I arrived, a young girl – about four, at a guess – was tugging at her dad’s jacket and shouting very excitedly, “Daddy, daddy, I can see the lorries, the lorries are coming…”

Some purists might not like the British Lorry – sorry, Truck – Racing Championship, but it has a cartoonish appeal that youngsters clearly enjoy – and we should be grateful for any form of the sport that makes future generations crave attendance. 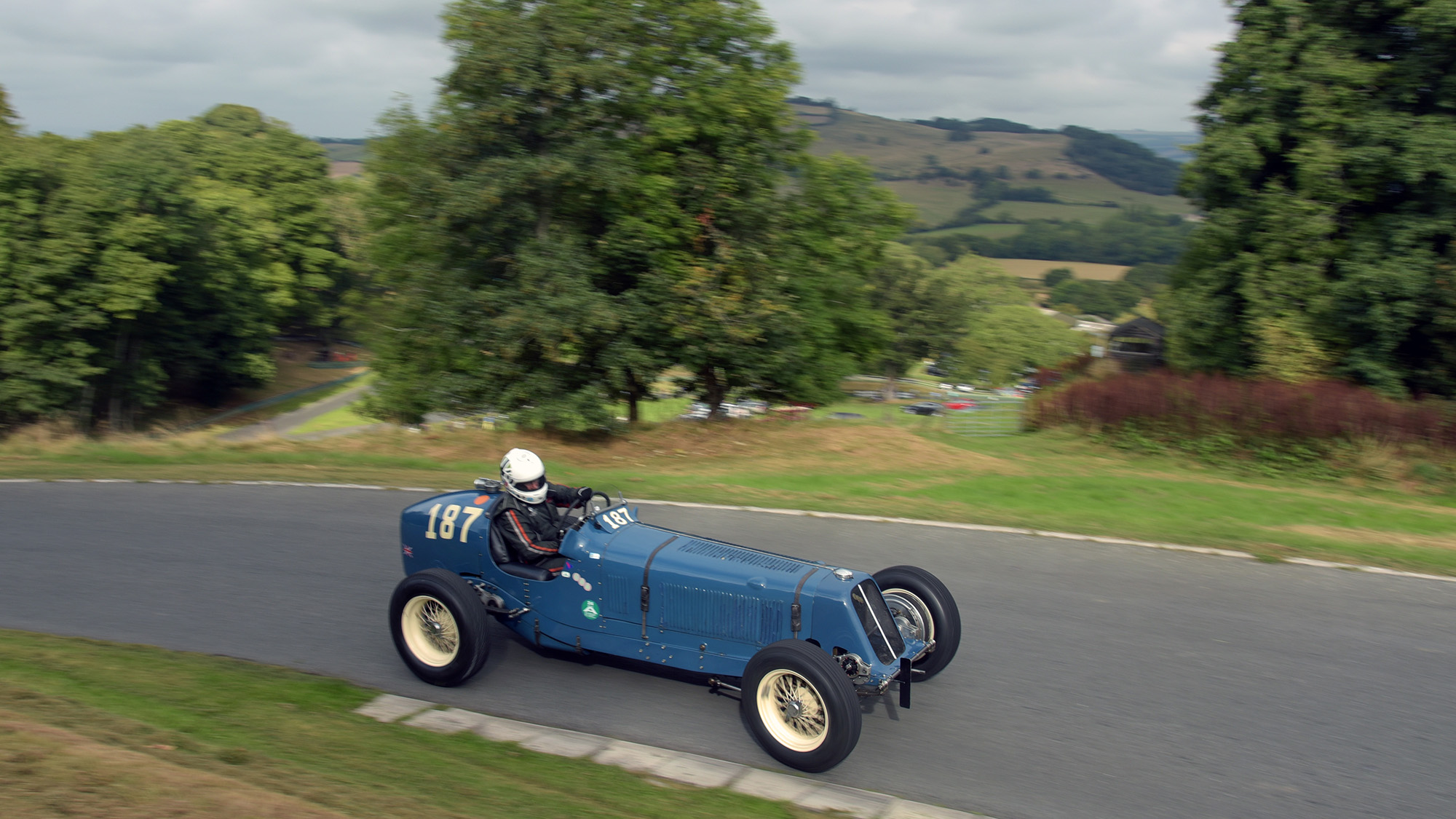 A quandary. I was oblivious to the ongoing fuel panic, largely because I don’t read newspapers of the kind that propagate fear, and Beckenham had run dry by the time I needed to leave for Prescott. I had enough on board to get there, just, but insufficient for the return trip. The solution? Set off in hope – and pledge to return if I hadn’t managed to find fuel by the time I reached Beaconsfield Services. Fortunately, a Shell station on the westbound A40 had operational pumps and a short queue of folk waiting politely for their turn – a far cry from some of the stuff that had permeated social media. 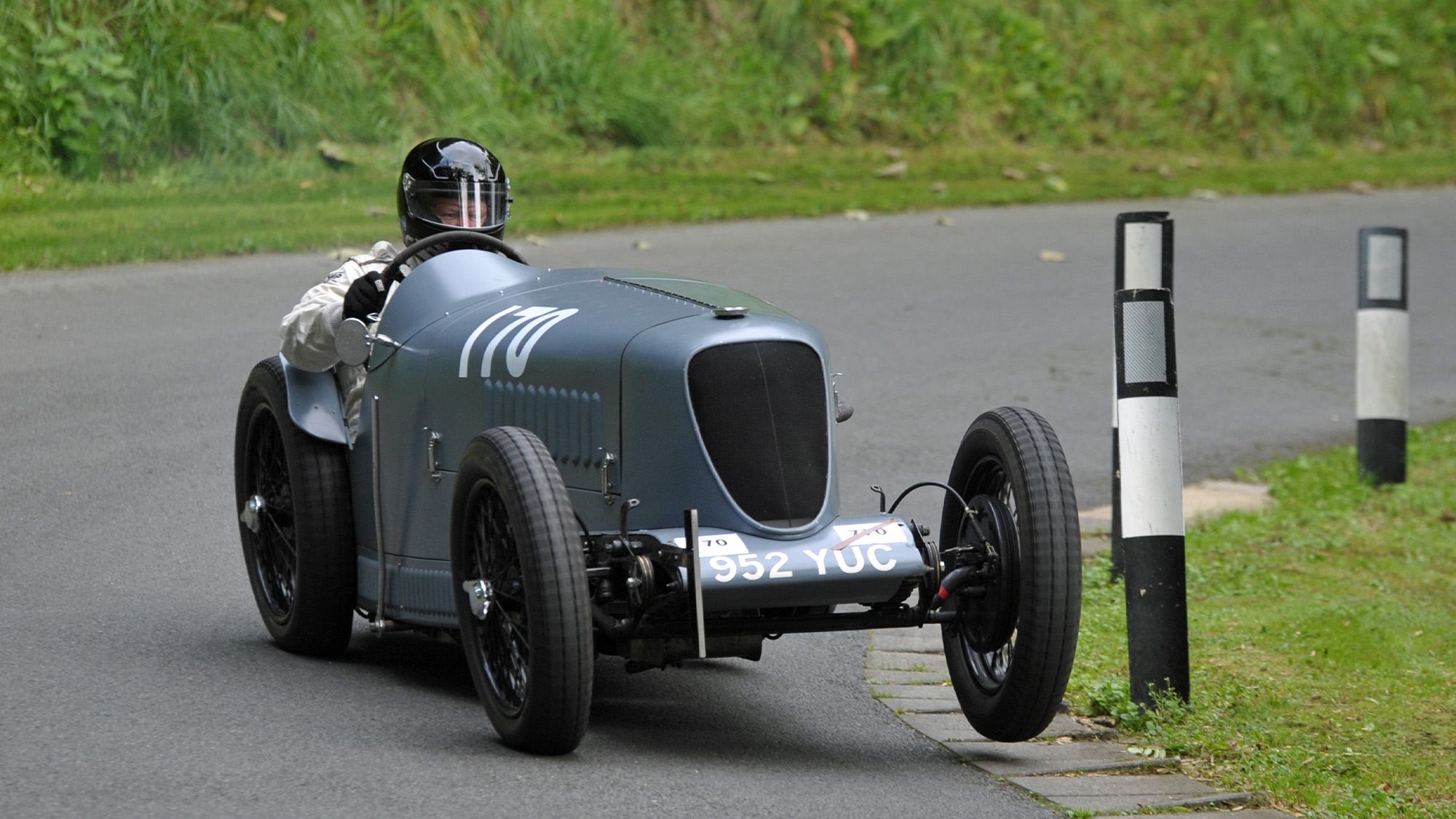 This was the Vintage Sports-Car Club’s second Prescott event of the year, a one-day affair on the longer version of the hill. The entry was nowhere near as busy as it had been in August – doubtless not helped by a clashing Frazer Nash race at Castle Combe. The crowd was much smaller, and the pace of the day less frantic, but the sights and sounds – including Roland Duce’s recently built ERA replica, RJB1, shared by David Ellison and Paul Richardson, and the occasional screech of pheasants in adjacent meadows – were every bit as delightful as they’d been a few weeks beforehand. 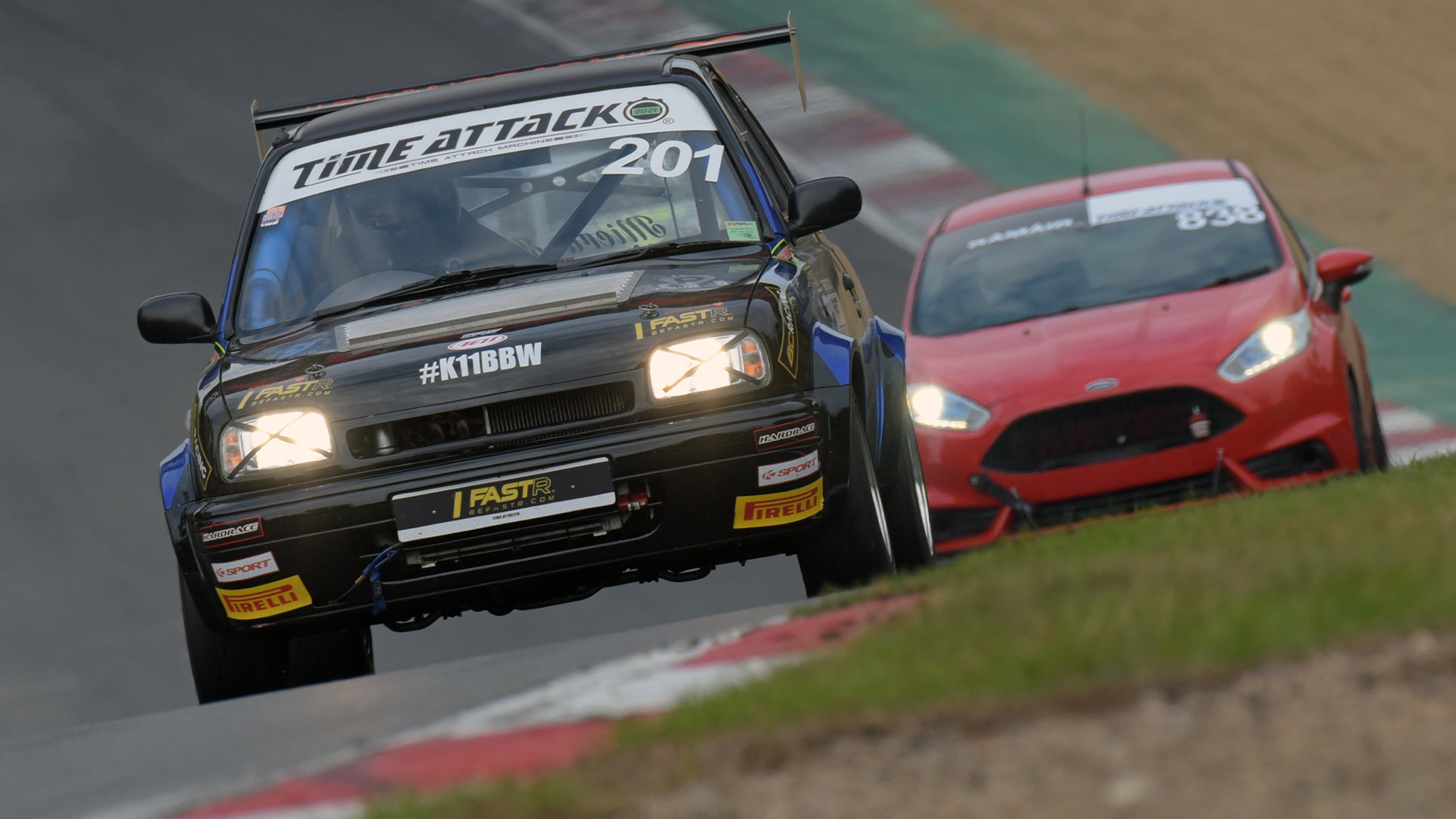 Rarely has the route to Brands Hatch been such an obstacle course, thanks to north-west Kent simultaneously combining a cycling event, a running race and, the latest in autumn fashion, fuel queues. While the urgency to top up is in some cases understandable, it seems equal parts stupidity and myopia to block roundabout access in the process…

All hurdles eventually cleared, there was another over the horizon on the A20: the longest queue I’ve seen at a Brands Hatch event for quite some time.

The trigger? Go Japan! – a celebration of Japanese car culture featuring time attack (a sort of halfway house between racing and a track day), drifting demos, parades and a couple of one-make series for Honda Civics. Something very different… and about as far removed as it’s possible to get from the previous afternoon’s pastoral pursuits in the hills above Cheltenham. 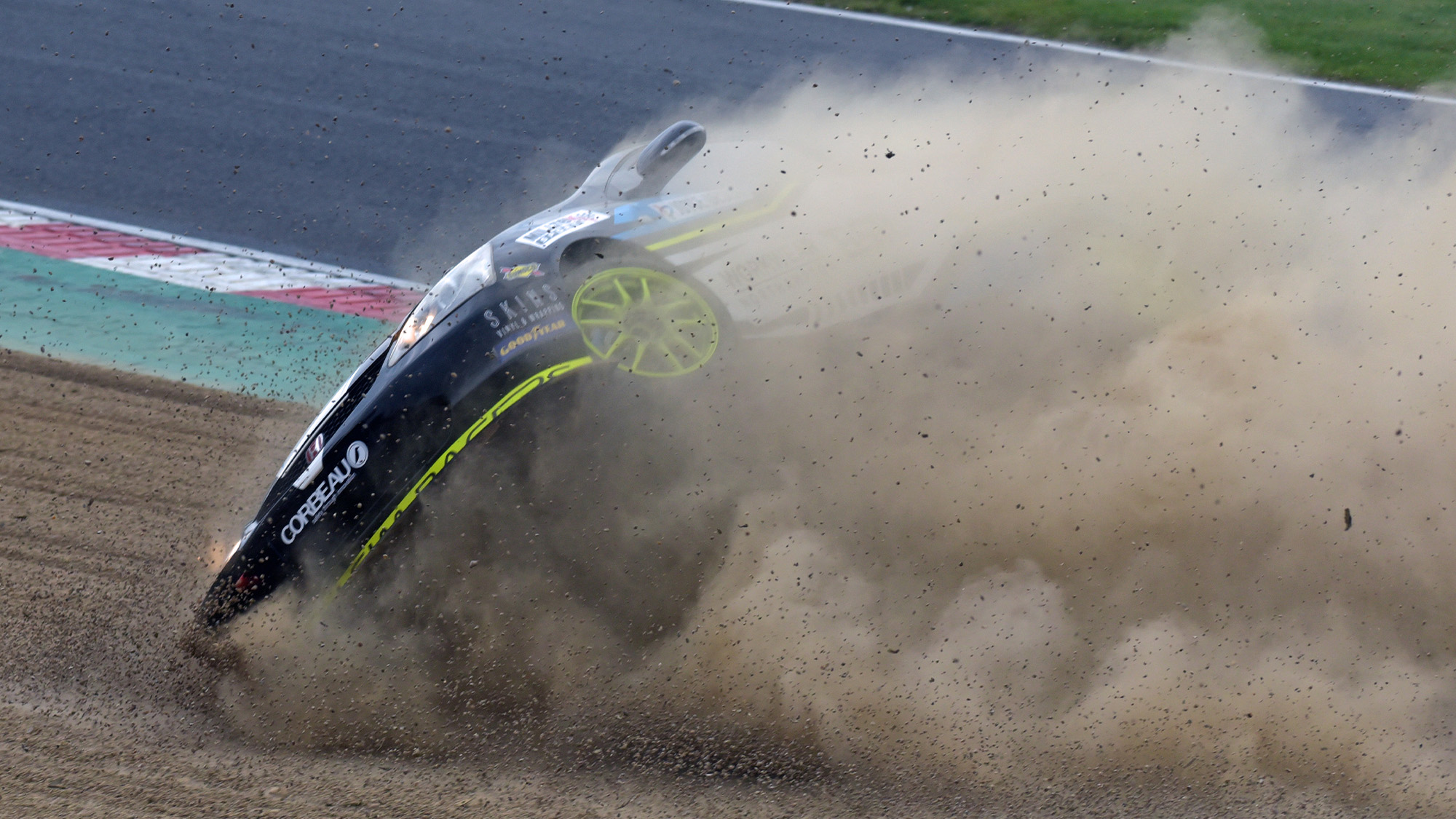 Ben Sharpe rolls during practice for the Honda Civic Cup. He went on to finish third in the opening race…

On the plus side, the event featured an interesting range of cars – including bewinged Nissan Micras and, during one of the lunch parades, a 352bhp Nissan Pao – that I have never seen before; on the minus there were far, far too many red flags (seven within the first two and a half hours, for a large chunk of which the track had been inactive due to the various stoppages).

Among the culprits was Ben Sharpe, who rolled his Civic at Paddock during the first practice session of the morning. His team had the car fixed in time for qualifying, however, and he rewarded them suitably with measured drives to third and a fourth later in the afternoon.

An interesting event, then, in which many of the cars were suitably spectacular.

The same could be said about driving standards, but not always in a good way…