Worth £265, this 48×60 cm print is an exciting showstopper for the wall of any motor sport enthusiast.

This stunning print, titled Risky Business, captures the drama of 64 years ago, as Stirling Moss drove to win the only World Championship grand prix at the daunting circuit.

The artwork shows Moss leading his rivals, as he went on to dominate the Pescara Grand Prix on the Adriatic coast, eventually crossing the line with an advantage of more than three minutes.

As rivals, including Juan Manuel Fangio and Luigi Musso faltered, Moss’ Vanwall powered untroubled around the picturesque 15.9 mile track, the longest ever to host a World Championship race.

Over the past two decades since winning a competition at the age of 13, Tim Layzell has carved out a name for himself as one of the world’s foremost painters of motor racing. His pop-art style has been imitated but never matched and to many it is perfectly suited to capturing the drama and movement of the sport. 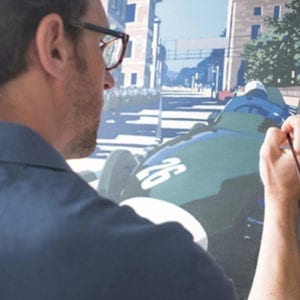 To enter this FREE Motor Sport competition, simply fill in the form below.