Round two of the Formula 1 Virtual Grand Prix season had many more big names in the mix, and it was an online racing newcomer that dominated proceedings.

Just a week of practice was all Charles Leclerc needed as his win from lights to flag never looked in doubt.

In what was a much more civilised race compared to the chaos of Bahrain, the field was well behaved throughout. There were some spectacular passes for good measure at Melbourne’s Albert Park circuit, on what should have been the day of the first Vietnam Grand Prix (the Hanoi circuit doesn’t feature on the F1 2019 game being used).

Ferrari had Charles and brother Arthur Leclerc to represent the prancing horse in week two and it was an impressive showing by both.

Leclerc senior leaped into an early lead while Arthur’s race was a battle, eventually ending up in fourth place.

From lights out, the lead Ferrari sped away as George Russell found himself in an unfamiliar position in the Williams on the front row of the grid. 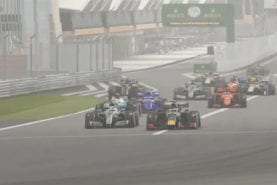 Formula 1’s attempt to entertain the masses during the coronavirus pandemic brought together an eclectic mix of experience and exposure, as Renault Academy driver Guanyu Zhou won the first-ever virtual…

The 2018 F2 champion quickly found a rhythm though, taking advantage of mistakes from those around him on the opening laps to settle into a third place he wouldn’t relinquish.

Alex Albon was one of those to suffer an error with a spin at Turn 12 putting the Anglo-Thai driver right down the order, as Johnny Herbert followed his lead and spun out of sympathy moments later.

A five-place penalty for a qualifying incident relegated Renault Academy driver Christian Lungaard from first but the Dane was the man to attempt to chase down the lead Leclerc, though he could make no real dent in second.

The order through the pit stop phase remained relatively stable, only the race leader’s impressive pace continuing to grow the gap to the rest, with Ben Stokes and Herbert bringing up the rear by some distance.

The 2009 world champion put on a show though, fighting with Albon as the Red Bull driver came back through the field.

In a battle of youth versus experience JB held on valiantly with little sim-racing hours under the belt. Albon swept round the McLaren in the third DRS zone in their battle for 10th, leaving Button to collect up a mighty tankslapper.

A mistake just two corners later for Albon and slide into the grass gifted the place back to Button. 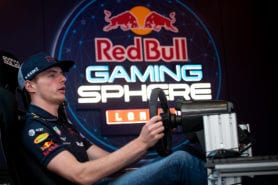 One lap later though and the Red Bull was back through and quickly off up the road.

Arthur Leclerc’s tricky Ferrari debut made his car the one to watch.

The 19-year-old fell back after contact with Lungaard early on as well as a separate spin with 10 laps to go. But, with impressive pace and a DRS-assisted pass on Antonio Giovinazzi, he fought back to fourth by the end.

The podium places however were out of reach, with Lungaard a solitary P2, 10 seconds behind the race leader and Russell enjoying the anonymity of third.

Nobody was catching the lead Ferrari though, demonstrated by the winner telling his near 70,000-strong Twitch audience his biggest worry during the race was how to approach lapping Johnny Herbert’s Alfa Romeo.