The coronavirus pandemic has put a halt on the 2020 motor racing calendar for the foreseeable future, but that hasn’t stopped multiple series offering a virtual racing alternative for fans.

It was certainly a controversial weekend as virtual competition boiled over into real-life feuds between drivers, as the competition online became very real.

Here’s a round-up of the biggest races, and controversy, that happened on the weekend.

After a controversial build-up to round 6 following Audi’s dropping of Daniel Abt for his actions last weekend, the actual on-track action in the Formula E Race at Home challenge returned with another new winner.

Mercedes driver Stoffel Vandoorne picked up the win at the virtual New York ePrix, winning from pole position in dominant fashion while the drama unfolded behind him. 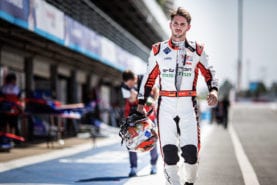 While the Belgian driver enjoyed a problem-free race, other championship contenders had a more eventful afternoon. Guenther, who’d dominated the series in the first few rounds fell right down the order to 21st after contact at the start with Antonio Felix da Costa and Neel Jani, while Wehrlein had battled into fourth by lap two.

An opportunistic move by the German late in the race on Oliver Rowland, who’d made a strong start to put himself in podium contention, and Jani kept his title hopes alive, slipping down the inside of both with four laps remaining.

Vandoorne’s win puts him first in the standings, with Wehrlein moving clear of Guenther. The BMW i Andretti driver’s miserable race means he is now 32 points off of the leader.

Jorge Lorenzo took victory in the MotoGP Virtual GP series with Yamaha, winning on his virtual return to Silverstone over Tito Rabat and Fabio Quartararo.

Lorenzo lost the lead to Quartararo straight away at the start and was then taken out by Takaaki Nakagami in Turn Two.

The Japanese rider took the lead coming onto the Hangar Straight after contact with the Petronas Yamaha man, leaving both Lorenzo and Quartararo to fight their way back to the front.

Nakagami retained the lead for five laps until an error on the brakes at The Loop resulted in a fall and gave the lead of the race to Rabat.

Lorenzo was the man behind having recovered from his opening lap fall, and pressured the Spaniard for the lead. Eventually, the Yamaha rider took the lead and didn’t look back, winning the Virtual British GP by 2.5sec, as Quartararo battled back to make the podium in third.

Fernando Alonso has made himself at home in the world of esports, winning back to back in the All Star Legends series this past weekend as Jenson Button secured the series championship.

The two-time F1 champion made it four Legends race victories in a row, taking both rounds at Silverstone with superb drives in both the feature and reverse grid races, leading the first from pole position and fighting through the field brilliantly in the second.

He picked off Dario Franchitti in the reverse grid race just a handful of laps before the finish to cap off a dominant performance.

Despite the heroics from the Spaniard though, it was former McLaren team-mate Button who won the title. The 2009 champion had been a major contender in each round, and even letting off the throttle half a lap early didn’t prevent his clinching of the championship.

Having passed the finish line on the main straight, Button let off the throttle until halfway down the Wellington Straight, forgetting the finish line in the Legends series was at the old National pit straight.

Despite the blunder, Button came home in 12th which was still enough to win the title.

Louis Deletraz picked up his first win in the SRO Esports GT Pro Series, making up for coming agonisingly close to his maiden win last time out at the Nurburgring.

The Swiss driver survived immense pressure from Lorenzo Marcucci, managing to keep the Audi driver at arms length to take the victory, leading from lights to flag.

Deletraz’s win gives him a 10-point lead in the standings over Marcucci, with the final round taking place on June 21 at a circuit to be decided by fan vote.