George Russell cemented his claim as the fastest F1 driver in the virtual world as he carried on his Virtual GP form into the latest round to dominate and win once again.

The battle at the top was cast in qualifying as Russell and Alex Albon fought hard for pole position.

Russell stole pole away with a superb lap to be the only man into the 1min 36s, and once more, he dominated the show when it came to the race to take a third Virtual GP win.

Russell and Albon’s starts were equal though an assertive sweep into Turn One kept the Red Bull driver at bay.

Charles Leclerc endured a difficult qualifying but was up to sixth having started in 10th until contact with Manchester City defender Aymeric Laporte at Turn Two relegated him to 14th. The Ferrari man was into the pits at the end of lap one though, effectively out of contention immediately.

The chaos at the start had allowed Esteban Gutierrez to nab third from the Haas of Louis Deletraz and McLaren’s Lando Norris, while the leading pair started to build a gap over the field.

Albon was the one to blink and pitted at the end of lap two. His undercut attempt was answered immediately by Russell on the following lap, who fitted the medium compound tyres. 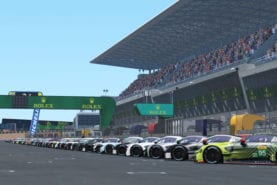 Russell retained the lead but struggled to extend his lead despite the compound advantage.

From this point on, the Williams man had to hold Albon at bay and retain the tyre life to make it to the end, a stint of 22 laps on a demanding circuit for rear tyres especially.

The gap out front had hovered around 5sec following the stops but Albon gradually began to eat into the lead.

F1 Virtual GP debutants Pierre Gasly and Sergio Perez struggled for pace versus the experienced drivers, their lack of playing time telling during the middle phase of the race as they both fell away from cars in front outside of the top 10.

With the top five spread out on track, it became a question of whether Russell’s medium tyres would survive the remainder of the race with Albon pushing hard.

The gap hovered around 4.5sec with five laps to go but a three-second time penalty for the Red Bull man due to corner cutting all but sealed Russell’s victory.

From that point on, Russell kept it calm and as he did in Monaco, dominated the race to win ahead of his F1 rivals.

Gasly ended his first online race in 12th, a number of penalties for Perez left him 15th and Leclerc struggled to a 14th place finish.