The final Virtual Grand Prix was won by its (unofficial) champion, George Russell as the Williams driver put in another dominating drive on Codemasters F1 2019 game against fellow Formula 1 drivers, esports pros and influencers.

After nine online races, there have been some aspects of the show that proved the virtual world can provide entertainment for fans in need of a racing fix and, by the same token, areas where it will never measure up to the real thing.

Here’s a look back at the good and the bad from the Formula 1 Virtual Grand Prix series.

Whereas F1 can be an ever-exclusive world that has struggled to work in favour of fans, the virtual side story over the past few months has provided many with a glimpse at the modern F1 driver with their guard down.

Lando Norris, Charles Leclerc, George Russell and Alex Albon starred during the break, live streaming their racing to fans on Twitch. The camaraderie and banter shared between them was a world away from the PR-driven robotic responses we are so used to on race weekends.

Competitiveness was absolutely on show but there was another side that came with the pressure being off drivers. The laid-back presentation, time to practice and stream while doing so, and the innate desire to win real or virtual gave fans a much more personal look at the next generation of F1 driver.

Each of them have been brilliant representatives of Formula 1 throughout the break, broadening the appeal of F1 and racing as well as attracting a younger audience to the product. It has been a huge plus point from all of this. 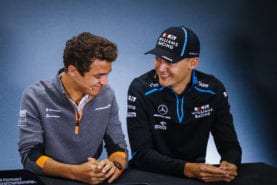 The fact this series even happened shows how far F1 has come from just a few years ago when it comes to its social outreach. A concerted effort has been made to attract a new audience to Formula 1 and, through the virtual series, the sport has been exposed to a huge number of fans and newcomers alike.

Half a million people tuned into the first race in Bahrain in March and while that number has fluctuated since, it has steadily attracted 250,000 viewers week in week out.

With such strong viewership from start to finish, F1’s online presence continues to grow as the sport tries to capitalise on an area it once neglected and the Virtual GP experiment is just the latest step in this process.

There is certainly a platform for esports racing moving forward from this extended break from real world racing, hopefully it will carry on the momentum it has built up while the real-world action resumes.

Technical difficulties robbed Lando Norris of multiple races early on in the series. Disconnects moments before or even during a race meant “LandoBot” – Norris’ AI controlled car – quickly became a joke online. Several instances of glitches mid-race though, including rubber-banding and lag, caused accidents and caused headaches for drivers.

These issues are out of F1’s hands but Codemasters’ biggest exposure with the series so far, outside of its own esports championship, was far from smooth sailing.

Track limits was a hot topic following the Virtual Chinese Grand Prix as drivers just didn’t bother sticking in bounds coming out of the final corner, running wide in order to gain lap time. It resulted in the implementation of the strict track limits setting in-game which caused drama and headaches in itself. 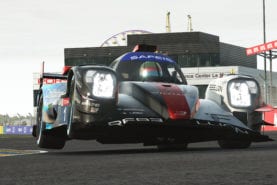 It ruined the battle between Russell and Leclerc during the Spanish GP and deprived fans of another fight for the win in Baku, Albon this time judged to have run out wide, handing Russell another win.

In the pursuit of being realistic and taking itself so seriously, the series ultimately lost a bit of magic it had at the start.

The celebrity appearances from other sporting figures such as Ian Poulter and Sergio Aguero or pop stars Liam Payne and Luis Fonsi might have given F1 a bit more exposure outside of the motor sport circles but in-game they failed to add much to proceedings.

Mid-race interviews with Poulter while the golf pro made mistakes live on air was about as entertaining as things got where the celebrity appeal was concerned and felt out of place everywhere else.

Yes, it may just have been a game in the end but getting in some of the bigger names on the current grid might have produced a fair amount of extra interest. Sebastian Vettel for instance gave sim racing a go in the All-Star Legends Series, but made no appearance in the F1 version.

One final point that might have been a missed opportunity on reflection was the chance to trial new race formats. With all the talk of reverse-grid qualifying races going on in the break from racing, did nobody think to try it online first? The timing was perfect for it and would have drawn extra viewership in. There was ample opportunity to try out different solutions but as in real life, it looks as though that ship has sailed for good.