From Nuvolari to Newey; Fangio to Franchitti, Motor Sport’s Hall of Fame is made up of the greatest figures of their era. Or is it?

The Legends Award is designed to recognised the individuals who, for one reason or another, have been overlooked in previous years. Each of the 2021 nominees has a strong case to join the greats.

Take Michèle Mouton who, 40 years after winning a WRC round, remains the only woman to have achieved that feat. Or Nelson Piquet who amassed as many Formula 1 World Championships as Ayrton Senna and Niki Lauda, but has just a fraction of their fame. And then there’s John Watson who showed himself to be supreme at battling past rivals and could easily have been 1982 F1 champion.

Thankfully we don’t have to decide because the decision is yours.

From co-driver to driver, promoter and most recently FIA president of the Women & Motor Sport Commission, Michèle Mouton has made a major mark in motor sport for women in and out of the car. She began focusing on a rally career in the early 1970s and was a co-driver to Jean Taibi in the first WRC event: the 1973 Monte Carlo Rally. Soon after and with advice from her father, she switched to the driving seat and finished eighth on debut in the Île de Beauté. 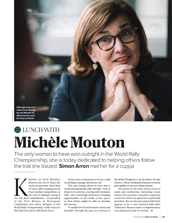 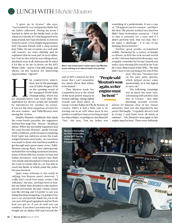 Keeping up with Michèle Mouton has never been the work of a moment. More than 30 years after stepping down from top-line competition, at the end of rallying’s Group B…

Strong results in other series’ led to Mouton earning a surprise Audi factory team drive for 1981. A career best finish up to that point of fourth came at that year’s Rally Portugal, though she would take her maiden WRC victory later in the year, besting Henri Toivonen and Ari Vatanen for the win. 1982 was a career-best season for Mouton, finishing second in that year’s championship to Walter Röhrl by 12 points, taking four wins along the way. Her results helped Audi claim its first WRC manufacturers’ title.

Part-time rally competition followed before she began to focus on making an impact in motor sport out of the car. She founded the Race of Champions in memory of rival Henri Toivonen. She later became FIA president of the Women & Motor Sport Commission and the FIA’s manager in the World Rally Championship in 2011. In the former of her roles, the commission has founded the Girls on Track -Rising Stars karting initiative, aimed at increasing the number of young girls racing in motor sport.

The second Brazilian world champion in F1, Nelson Piquet is one of only 10 drivers to have won three titles. With 23 race victories to his name along with 24 pole positions and 60 podiums, Piquet is rated as one of the all-time great champions in Formula 1 history. His career began in Brazilian karting where he’d secure the national championship before moving to Europe and competing in Formula 3. He broke Jackie Stewart’s record for wins in a season during 1978 and F1 came calling the following year.

His first full season came in 1979 with Brabham where he’d regularly out-qualify team-mate Niki Lauda, though the season was fraught with reliability woes. The following campaign with the BT49 would be different. He took his maiden win at the US Grand Prix West but just missed out on the title. 1981 and Piquet finally claimed the crown in a title battle decided by a single point. He’d add a second crown in 1983 but it took a move to Williams and iconic fight with Nigel Mansell for him to win his third.

The team-mates were closely-matched and while Mansell took more wins, Piquet’s consistency across the season won him the championship as the duo’s relationship rapidly deteriorated. Subsequent moves to Lotus and Benetton didn’t pay off and his career never quite reached the same lofty heights again but two race victories in 1990 showed he still had underlying speed if not the equipment to match. Never one to win a popularity contest, his place in F1 history cannot be denied.

His career never brought a title but he came close on separate occasions. John Watson’s decade-long F1 spell began with non-championship races in 1972 but his first full season came the following year with Hexagon of Highgate and Motor Racing Developments. Respectable points finishes the following year bolstered his reputation but the subsequent campaign was a disappointing follow up.

John Watson and the art of the pass

In 1976, ‘Wattie’ was an F1 winner as he enjoyed his most successful season up to that point, earning two third-places prior to his Austrian GP breakthrough. He earned a move to McLaren for 1979 where he secured a podium on debut. In 1982, he narrowly missed out on the world title after taking two victories and a further three podiums but ended the season five points off of the top spot in third.

His party piece was clawing his way through the field from the back. His most famous effort came in the United States GP West where he started the race from 22nd only to scythe his way through and claim victory. It remains the record for lowest starting position to win in the modern Formula 1 era. Following the culmination of his F1 career, Watson competed at Le Mans in sports cars before moving to the commentary box where he still provides his voice for GT World Challenge Europe events today.