This year’s SpeedWeek festival saw sports cars, supercars and prototypes roll onto the Goodwood circuit for a no-holds-barred timed shootout, with all eyes will on the timing screen to see if any can break the track’s unofficial lap record of less than a minute.

If it hadn’t been for a last-minute pandemic-related cancellation from Volkswagen, there was a very real prospect that the ID.R electric sports car would have broken that barrier.

It’s a feat that is only thought to have been done once: in 1983, when Nelson Piquet arrived to test the revolutionary Brabham BT52.

There’s no known footage of the private session, just whispers of spectacular acceleration from the dart-shaped Brabham; a qualifying simulation with the BMW engine’s turbo boost turned to max; and a grassy shortcut.

Piquet’s lap is widely accepted as being the fastest ever completed at the circuit, with one qualification: nobody seems to have recorded the exact time.

“He didn’t bother with Lavant and went across the grass, which must have been pretty scary in a ground effect car at 150mph”

The sub-one minute figure is the stuff of legend but anyone looking to beat it doesn’t actually know what they are aiming for – would 59sec be enough? 55sec?

“I’m not sure I was even aware of the lap until Nelson came to the Festival of Speed very early on,” says the Duke of Richmond, owner of the Goodwood Estate. “He told me about it and I’ve had quite a few other people mention it since then.

“In fact, someone told me the other day that they don’t think he took Lavant – the only really corner [on the circuit]. Apparently he just didn’t bother. He just went straight across the grass, which must have been pretty scary in a ground effect car at 150mph.

“Somebody probably does know what it was, but all I heard was it was a sub-one minute lap. I spoke to Bernie [Ecclestone, Brbahm’s owner in ’83] about this but he wasn’t here back then.”

Goodwood’s official lap record dates back 55 years, when Jim Clark and Jackie Stewart both lapped in a time of 1min 20.4sec during the final period F1 race before the circuit closed in 1966.

That time has improved upon since the track reopened in 1998 for the Revival. The fastest time of 1min 18.2sec was set by Nick Padmore in a Lola T70 Spyder at the 73rd Members’ Meeting in 2015. He then smashed that record during SpeedWeek, behind the wheel of a 1989 Arrows-Ford A11, where he stopped the clock at 1min 09.9sec. 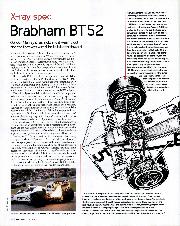 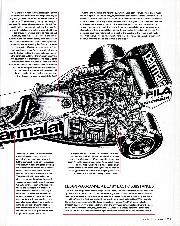 Gordon Murray's rush job: and it wasn't just the car that was wired, he tells Keith Howard For some, like Cosworth's Keith Duckworth, Formula One's turbo era was a crazy…

May 2005 Issue
By Keith Howard

Formula 1 cars were a familiar sight at Goodwood until the mid-1980s when noise regulations and the promise of warmer climates saw teams decamp to Europe. So it’s likely that the 1,000bhp+ Gordon Murray-designed Brabham BT52 was one of the fastest cars ever to run flat out at the circuit, making the mystery of the precise lap time more frustrating.

Perhaps the driver himself can help? Nelson’s son, Pedro is at SpeedWeek, driving one of the BT52s that was at Kyalami in 1983 when his Dad secured the world championship.

We caught up with him as he prepared to go out on track. What time did it set 37 years ago?

“My Dad doesn’t know,” says Pedro, who is racing in F2 this season. “He can’t remember and it was a test, so there’s no record.”

However, he’s sitting in an original-spec BT52 at Goodwood, with a team of BMW mechanics and an open track. Could this weekend be an opportunity to see if it can lap the circuit in less than a minute?

“No,” says Piquet quickly. “Back then, they must have been doing qualifying runs, probably with qualifying tyres and pushing to the limit. 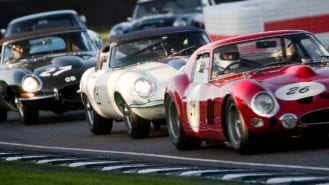 The third day pf Goodwood SpeedWeek starts early, with the 8.40am Richmond and Gordon Trophy for 1954-'60 grand prix cars, beginning a day of non-stop racing and demonstration runs. The…

“Now we’ve got hard tyres, the grip’s not that good on low-speed corners, and this isn’t a car that you can push to the limit any more. It’s here for a demonstration run – not the lap record.”

So although the evocative sound of the four-pot turbo will ring out this weekend, the details of its mythical lap time appear to be lost to the mists of Goodwood’s rich past.

“For that time, it’s so fast,” says Piquet. “There are so few people that could drive it fast; you have to be on a different level.

“And it’s so different to today: the gearbox with the lever and the huge turbo that takes so long to come in.

“I’m really happy to be driving it on the circuit. When I first heard about Goodwood, I thought it was going to be the hillclimb, which is nice, but you just go up and you can’t really feel anything. On this track, you really feel something.”