The 2020 Silverstone Classic is the latest event to be cancelled due to the Covid-19 pandemic.

Originally scheduled to take place on the weekend of July 31 – August 2, the three-day motoring festival will no longer go ahead due to the scale of the event and requirements to ensure it could go ahead safely while respecting social-distancing requirements.

Its cancellation had been anticipated because of the difficulties in hosting a large crowd, but also because the weekend is earmarked for a grand prix behind closed doors at Silverstone, as part of Formula 1’s efforts to begin its season.

The chances of the race were boosted over the Bank Holiday weekend, with reports that Boris Johnson has given his backing for a return to racing in the country. F1 officials and Silverstone have been lobbying the government to grant teams and personnel an exemption from new quarantine restrictions, which would otherwise prevent races from taking place.

Plans had been in place for this year’s Silverstone Classic to celebrate its 30th anniversary and these are now likely to be shifted to bext year.

A record number of attendees had been expected to turn up over the summer weekend, with well over 100,000 people believed to be planning on attending that weekend.

“Following the latest Government advice, coupled with other scheduling changes at Silverstone, we have reached the inevitable conclusion that we will need to cancel this year’s event,” said CEO of Classic organiser Goose Live Events, Nick Wigley. 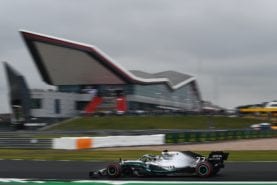 Silverstone has reached an agreement with Formula 1 to host two grands prix this summer. Both races will be held behind closed doors, as organisers look for government approval to…

“Given the current circumstances and the unclear outlook on timescales, staging a postponed event – which was our original back-up plan – isn’t something we can plan for with any degree of certainty if we are to deliver the style of Classic that we all know and love.

“I can’t tell you how sad this news makes me feel. For the last 12 years it has been my life’s focus to build the Classic into the most amazing family friendly classic racing festival, the biggest and many people think the best in the world, but our priority at all times is the safety and wellbeing of those attending our events – as well as our own team – and we know that Classic fans will understand why this step has been necessary.

“As an independent events company passionate about what we do, we are so proud to have developed the Silverstone Classic into an internationally renowned historic motorsport festival enjoyed across generations of car enthusiasts, families, racing drivers and petrolheads.”

Ticket holders to this year’s cancelled festival will have the option to request a full refund on their tickets or roll them over to 2021 for next year’s Classic.

“In times of difficulty, communities tend to come together and we’re incredibly grateful for everyone’s continued support. It means a lot. The passion of those coming through our gates is what makes the event the success that it has become and we are now already looking forward to celebrating our delayed 30th anniversary with everyone next year instead,” Wigley added.