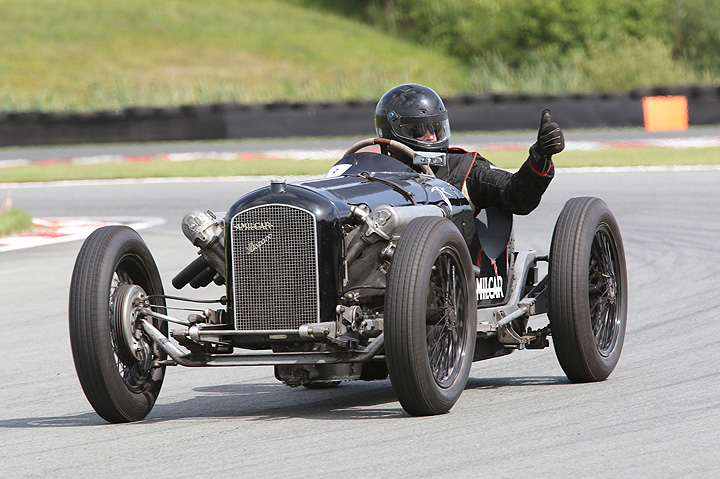 In front of a strong crowd, five cars enacted an enthralling battle at the head of the race as ample power mated to 1920s chassis technology delivered a glorious oversteering duel.

Showing that he has quickly got to terms with his recently acquired Amilcar-Hispano Special, Tom Walker wriggled through to depose early leader Charles Gillett as 11.7-litres overcame 1500cc of Frazer Nash Super Sports. However, this wasn’t just a two-way contest as Tony Lees (AC/GN Cognac), Jonathan Cobb (Frazer Nash) and Justin Maeers (GN Parker) made it a five-way party.

While Walker began to establish himself in the lead, Gillett was mighty as he slid the Nash around in wonderful powerslides. However, a grassy moment on the exit of Old Hall cost Gillett pace and he was quickly bundled back a couple of places.

All too quickly, the 12-minute race was over as Walker stormed to the line with little more than half a second in hand over Lees as Gillett headed Cobb and Maeers for third. Less than two seconds covered five cars at the flag after a fine contest that the crowd enjoyed as much as the drivers.

With only six cars on the grid, the 20-minute Premier Cru race for pre-war racing cars did not look promising and absent was Mark Gillies after ERA R3A sustained a broken gearbox a week earlier at the Chateau Impney hillclimb. However, Nick Topliss (R4A) and Paddins Dowling (R10B) more than made up for the thin grid by playing out an absorbing lead battle.

A first rate launch sent Topliss into a handy early lead, but Dowling got his head down and settled into a pace that took him closer and closer to the leader. Into the second half of the race, it was clear that Topliss was pushing hard as a big moment on the brakes into Old Hall cost him a couple more tenths from his slender lead.

Recognising that his rival was vulnerable under braking, Dowling took a deep breath and dived down the inside as they braked for Fosters on the last lap. Topliss gave the trans-Atlantic commuter racing room and Dowling duly led around the rest of the lap to take victory. “We were as close as we could be,” said Dowling. “I was trying to find a place to go by and Nick was kind enough to allow me to do so!”

The ERA duel was reconvened later in the afternoon for the Hawthorn Memorial and Spanish Trophies race, but this time it was for third place. The race followed a remarkably similar pattern as Topliss made the early running before Dowling nipped through under braking at Fosters late in the race.

Yet this time around, it was a contest only for third place as some way up the road at the front of the race was the Kurtis Indycar of Fred Harper with the diminutive Lola Mk2 Formula Junior of Robin Longdon giving bold and determined chase.

The leading sports car race was the Bill Phillips Trophy, which was split into two grids to accommodate the entry. In the first instalment, Nigel Hall worked his Lagonda LG45 ahead of Nick Rossi’s glorious Alfa Romeo 6C as Fred Boothby’s cheeky MG J2 chased hard. In the second race, Andrew Mitchell’s HRG just held VSCC President Tim Kneller’s Riley TT Sprite at arm’s length, though the gap was under two seconds at the flag.