The start/finish area at the old Kyalami was a wide apron atop a crest. This then was the broad, sunlit upland for the two striking, tall young men walking the walk from the unfashionable far end of the pit lane to the front row of the grid.

All eyes – some green with envy – were on them. They knew it and soaked it up – understandably so. For theirs had been an extraordinary achievement.

“You could feel the hostility,” says Max Mosley. “People thought we were taking the piss. It wasn’t like that. Robin [Herd] and I were conscious of the need to avoid hubris: pride comes before a fall. But you wouldn’t be human if you hadn’t savoured the moment.

“Formula 1 people are optimists, but we knew it was a miracle that we were there at all.”

Just six months had passed since Mosley and Herd had talked the talk atop The Mountain at Cadwell Park. Their first March car – a simple Brabham/Lotus Formula 3 copy – had just finished third on its debut, driven by fresh-faced Swede Ronnie Peterson, and the following week’s mags would be full of them: Formula 1 car under construction; two drivers to be announced soon; newfangled computers; and considerable financial backing.

Elements of truth exaggerated out of upbeat enthusiasm and a don’t-look-down methodology. 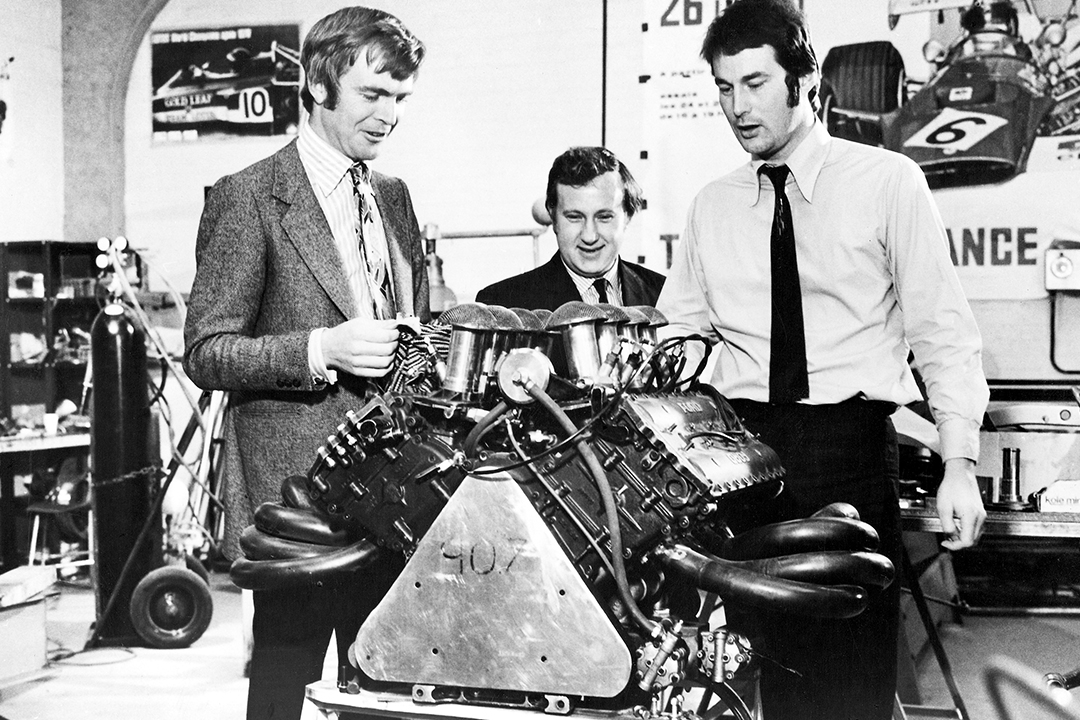 Mosley with Rees (centre), Herd (right) and a Cosworth V8 ahead of the 1971 season

Nascent March was based on faith, hype and Charm – an acronymic name considered but rejected – plus an initial investment of £2500 each from its gang of four: Mosley, Alan Rees, Graham Coaker and Herd.

“You do things when you are 29 that you wouldn’t do when you are old,” says Mosley. “You don’t stop to think what could go wrong. You are so busy putting things together that it all seems natural. The amount we did in those next few months was incredible but at the time it seemed to be the thing to do.

“Doing F1 differently was a very conscious thing. I remember in 1969 reading in one of JK Galbraith’s books that wealth used to be land, then industry, and that now it was ideas and ability. I explained to Robin that the money would come because we had the ability. It wasn’t as simple as that in real life – but that was the spark: we thought it would happen.”

Mosley and Herd, acquaintances at Oxford University, had firmed their friendship after meeting at Frank Williams’ lock-up in 1968; Rees and Herd had known each other since Monmouth School; and junior formulae racers Rees and Coaker were close. When they convened at Herd’s Towcester home in May 1969 they drew tighter several strands. 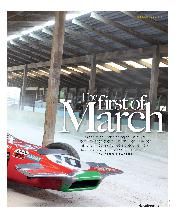 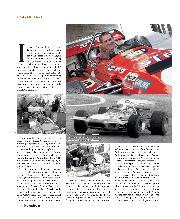 The first of March

It's spent decades hanging on a wall, but now the first-ever March Grand Prix car is to run again - 40 years after one lucky journalist got to test drive…

Herd and Rees had spoken of creating an F1 team around Jochen Rindt; as had Herd and Mosley; Coaker, Rees and Herd were considering producing off-the-peg racing cars; and Herd, a designer in demand – and the only one who knew all of the above – was considering other options, too: Rindt – and his then somewhat shadowy manager/adviser Bernie Ecclestone – wanted him for a team of his own; and Keith Duckworth, Herd’s current employer, had volunteered shares in Cosworth.

Yet legal eagle/sponsorship hawk Mosley was the most persuasive: “Bernie would have had money. Duckworth was very established and very successful. We had sod all. But Robin had a very clear and brilliant mind. Intellectually confident, he felt he could achieve a great deal in the right environment. Ours.”

That name – registered the following month but soon subsumed by March – was a jokey reference to Rindt’s heavily accented belittling of the F3 car taking shape in Coaker’s garage in suburban Reading.

“We had all wanted Jochen and so I drove to Geneva that summer and did my best to persuade him to drive for us,” says Mosley. “I stayed the night and he was friendly – but completely dismissive of us. A schoolboy’s dream.”

Nevertheless, a 3000sq ft unit in a Bicester industrial estate was rented and there the team’s first recruits, Bill Stone and Ray Wardell – sleeping in a Transit and cooking on a camping stove – completed the F3 car.

And Chris Amon, tired of Ferrari, was wooed for 1970, sold on the idea of a dedicated one-car team.

No one could know how the project would snowball over winter.

OTT STP boss Andy Granatelli, having at last conquered Indy in 1969, turned to Europe and to March – and brought super-keen Mario Andretti along for the ride.

And then the topper, the ever-loving Lulu of all times: world champion Jackie Stewart came a-knocking. He was less keen but in desperate need of a ride.

The Scot had been forced from his beloved Matra by big-industry politics – new owner Chrysler would not countenance reliance on a Ford-backed engine – and his loyalty to Ken Tyrrell, Cosworth and Dunlop had stymied potential deals to run a Brabham, BRM or McLaren. Smoke-and-mirrors March was his only ‘realistic’ option.

Suddenly March had no machine shop, one lathe and 10 F1 monocoques to build – plus spaceframes for formulae 2, 3 and Ford, oh, and a couple of Group 7 big-banger sportscars. Luckily anything seemed possible: the Man in the Moon was, well, a man; The Beatles were, in public at least, giving peace a chance still; and Sir Alf Ramsey had yet to unwisely substitute Bobby Charlton during a World Cup knockout match. 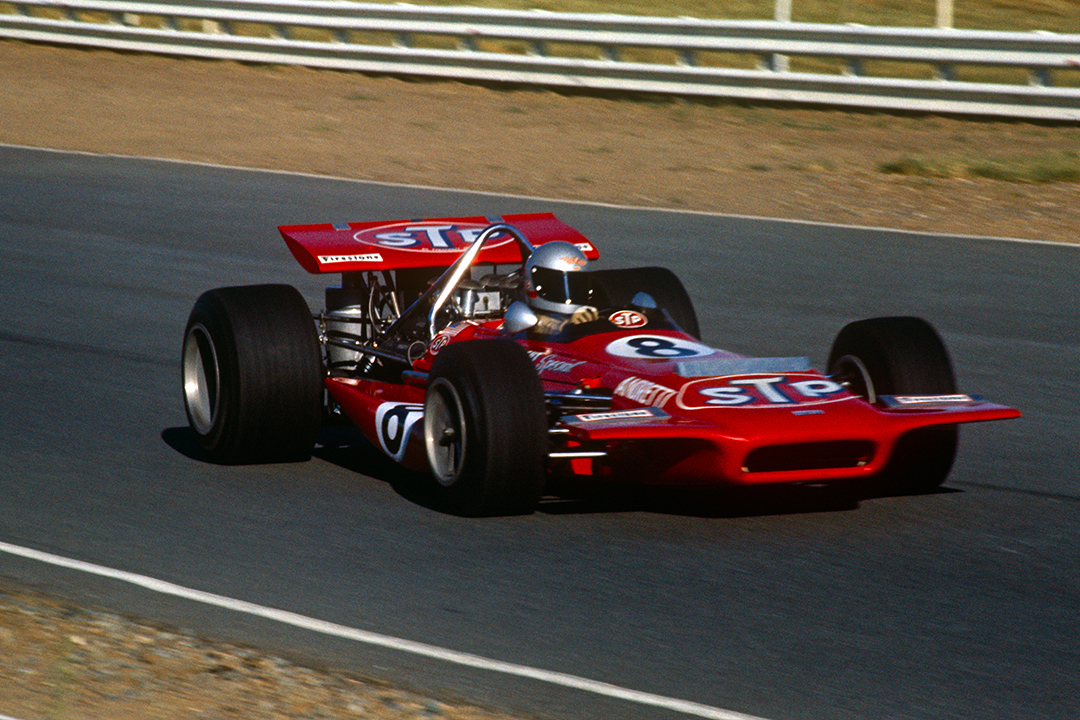 “Some had worked with Alan, knew and trusted him,” says Mosley. “The same went for Robin. One or two had worked for me. Very young, they were attracted by something completely different. The right atmosphere.”

Overblown progression wasn’t to everyone’s taste, however, and the ‘Much Advertised Motor Racing Car Hoax’ copped flak from the media. March no doubt was stretching the bounds: F1’s ‘Kit Car Era’ was not yet a thing – indeed some reckoned Cosworth’s DFV long in the tooth already; a mystery backer was neither confirmed nor denied – with good reasons both; and that F3 car turned out to be a bit of a duffer.

March was surviving on extended credit, counting the days until the deposits arrived in early November.

“That winter was fine because everybody paid,” says Mosley. “Plus all our suppliers thought we were extremely rich and I didn’t feel it was my job to say that this wasn’t true.

“We were charging Tyrrell £6000 per chassis and Walter Hayes of Ford told us to charge £9000. ‘We can’t. We’ve done the deal.’ He replied, ‘Leave Ken to me.’ Actually Walter was putting up the money and he realised that it wasn’t enough. We would have been out of business but for that.”

Thus there were several disbelieving ghouls at the big reveal at Silverstone on 6 February 1970. Also present were: Stewart, Tyrell, Amon, Granatelli, Andretti (clearly suffering from the cold), Firestone, Dunlop, Duckworth and Hayes.

“That was the key moment,” says Mosley. “The whole of F1 turned up. Nobody thought we would have an F1 car there; maybe a mock-up at best. In fact we had two. And both were runners.

“Granatelli pitching up with Mario was a complete surprise for the press, too. An extraordinary day.” 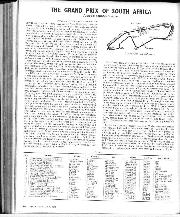 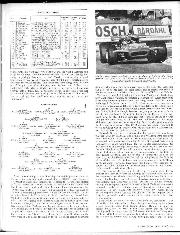 With the break in Grand Prix racing from November, 1969, to March, 1970, all the teams, and some new ones, made remarkable efforts to be ready for the new season…

Another F1 chassis had been shipped to South Africa for an extended and lucrative F1 tyre test prior to the opening Grand Prix on 7 March.

Could Colin Chapman have pulled off something similar? Perhaps, if minded. But the remainder of F1’s old guard wouldn’t have considered it – and maybe wisely so.

March was too far ahead of the sport’s accelerating commercial curve: it failed to land sufficient sponsorship; spread itself too thinly; and its first F1 car was by necessity conservative and 70kg overweight.

“We were doing too many things, too many different cars and, not having massive resources, couldn’t develop the car,” says Mosley.

The astute Stewart quickly sussed that 701 had little development within it; and Tyrrell had already decided to defect. Amon, in turn, was pissed about the dilution of his deal.

Yet there they sat, 1-2, at Kyalami – one blue (on pole), one red, inseparable by lap time. Stewart would lead before slipping to third; and Amon would suffer his habitual abysmal luck and retire early. 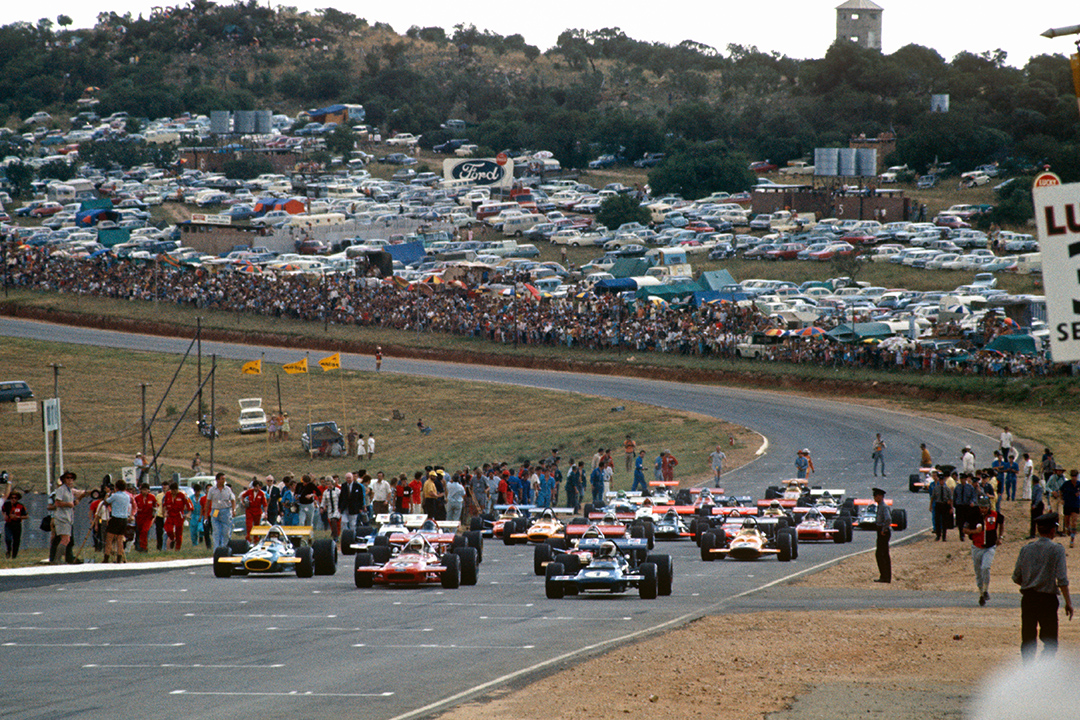 Incredibly Marches would win the next three F1 races – the Race of Champions, the Spanish GP and the International Trophy – two of them from pole, but reality was soon to bite in the form of Rindt in the radical Lotus 72.

March finished third in the constructors’ race – and repeated that feat in 1971, as Peterson confirmed his promise in Herd’s best, the 711.

It would win two GPs – Vittorio Brambilla in Austria in 1975 and Peterson at Monza in 1976 – but F1 would, in truth, be a long and slippery slope for March.

“I caught Jochen’s eye on the grid [Rindt had qualified fourth at Kyalami in a Lotus 49C],” says Mosley. “I didn’t want to be triumphalist but there was an exchange of info in a glance.”

That schoolboy dream had come true.