It is reckoned that 100 million were printed.

STP stickers adorned everything and anything – from Formula 1 to the Soap Box Derby, racing powerboats to snowmobiles, and your Dad’s toolbox to a mate’s skateboard.

NASCAR star Richard Petty was visiting the troops in Vietnam when he was amazed to discover that there were just as many – if not more – of them stuck to tanks and Jeeps than there were on the Chevrolets, Dodges and Mercurys at Daytona.

The man responsible for this marketing phenomenon was Anthony ‘Andy’ Granatelli.

When his staid Studebaker superiors insisted that he wear a business suit at Indianapolis rather than his team’s STP-dotted white ‘pyjamas’, he had one made in the same garish material.

Granatelli did whatever he felt he had to for his business.

His bosses’ reaction is unknown to this writer – but sales of Scientifically Treated Petroleum went through the roof. 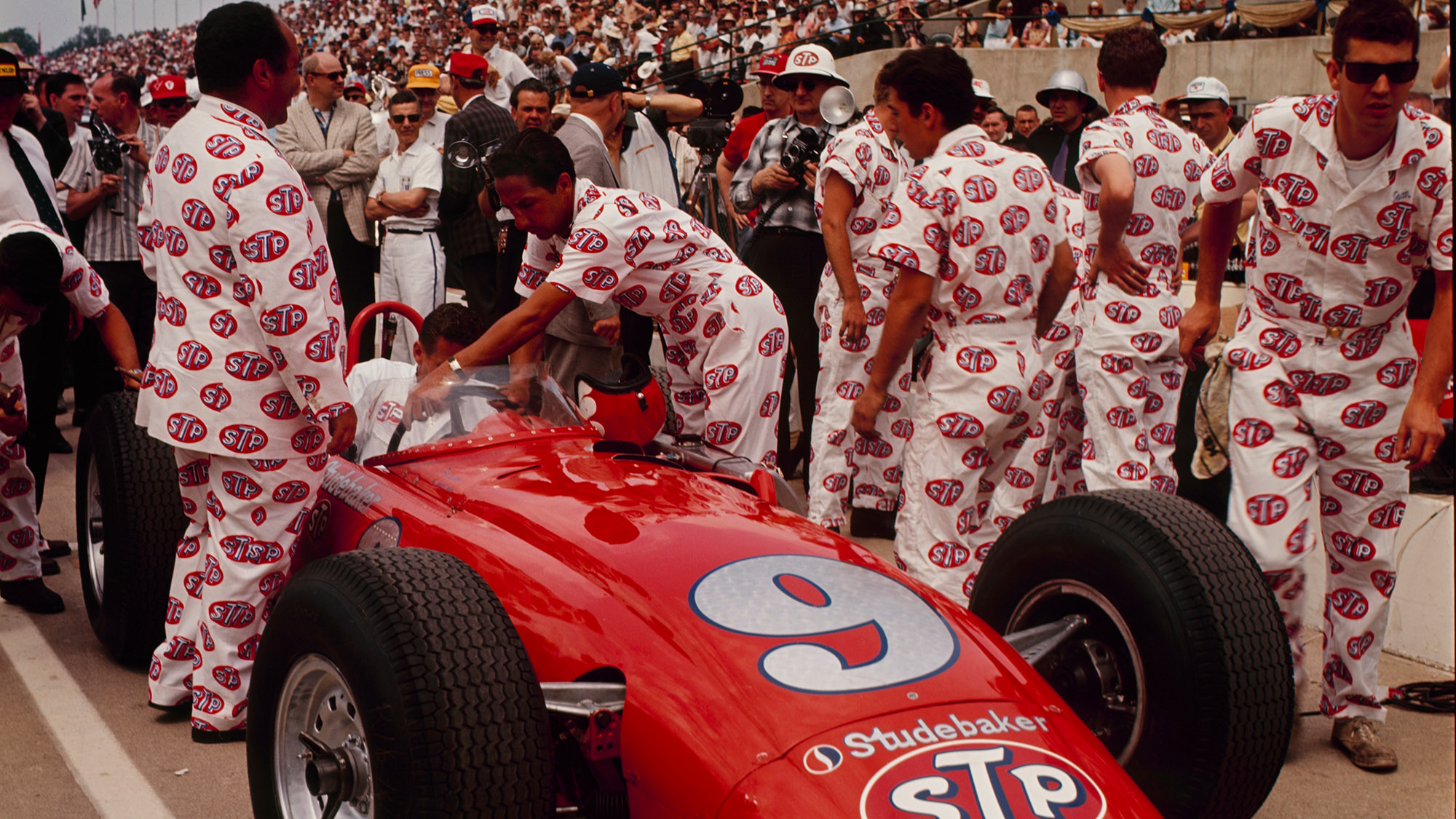 The son of a Sicilian émigré – father was from Campofelice of Targa Florio fame – Granatelli had long ago earned those showman’s spurs with his Hurricane Racing Association.

Its mix of stock car hard knocks and knockabout humour – a dummy strapped to a stretcher jettisoned from an ambulance supposedly ensnared by the track action – once attracted almost 90,000 spectators to the quarter-mile oval within Chicago’s Soldier Field stadium.

Granatelli was not averse to racing’s traditions but preferred to stay one step ahead of them or at the very least emerge from out of leftfield. 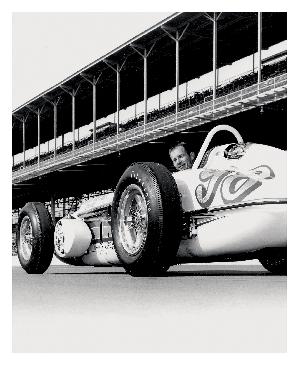 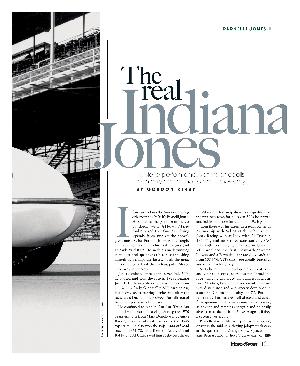 His stellar performances at Indianapolis form only part of the Parnelli Jones story By Gordon Kirby If anyone defines the American racing driver of the 1960s it’s Parnelli Jones. He…

Having made his first million alongside brothers Joe and Vince by selling go-faster goodies via their Grancor operation to the hot rodders of the Midwest, he ‘retired’ – and in 1958 bought the ailing Paxton supercharger concern.

This acquisition brought him swiftly into Studebaker’s sphere – he was asked to revitalise its STP brand – and also led to his purchasing the rights to the iconic, distinctive but star-crossed Novi engine.

This centrifugally supercharged wailing V8 had been the fans’ favourite at Indy since 1941 without it ever finishing higher than third. It would do no better in the hands of the Granatellis – even when they ran it beyond 800bhp in conjunction with Ferguson’s 4wd system. 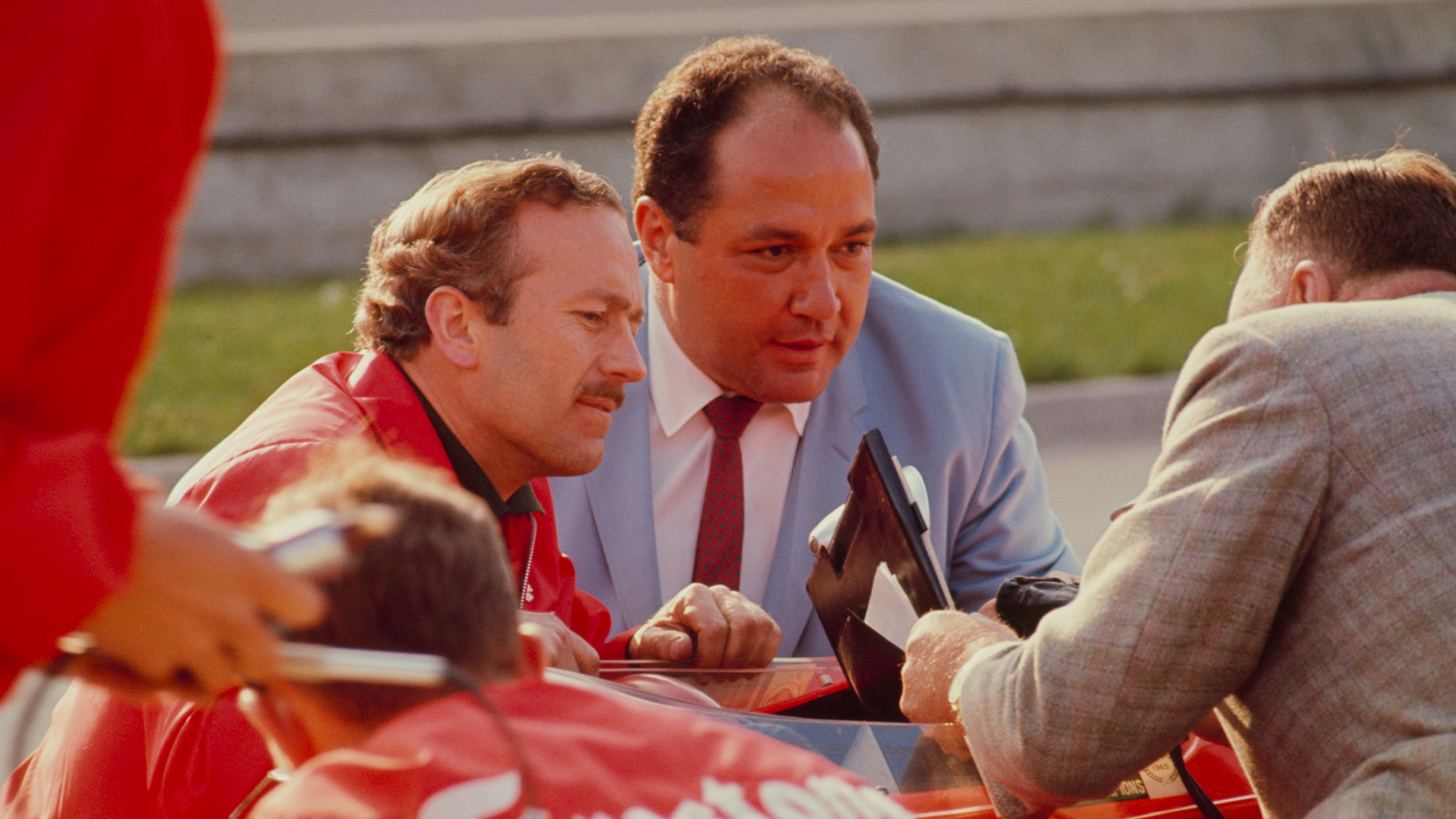 Granatelli and Chapman in 1966

Two forces of nature – one built like a wrestler, the other as relentless as a dog with a bone – theirs would be a contentious relationship. And oddly, only when it collapsed in very public fashion in 1969 would Granatelli end his long wait for victory.

For the larger-than-life ‘Mister 500’ met with many brickbats at ‘The Brickyard’.

Granatelli’s first and last attempt to qualify as a driver was ended by a painful – broken bones and teeth – accident in 1948.

Even having joined forces with Lotus – the dominating force of 1965 – he continued to miss out. Just. 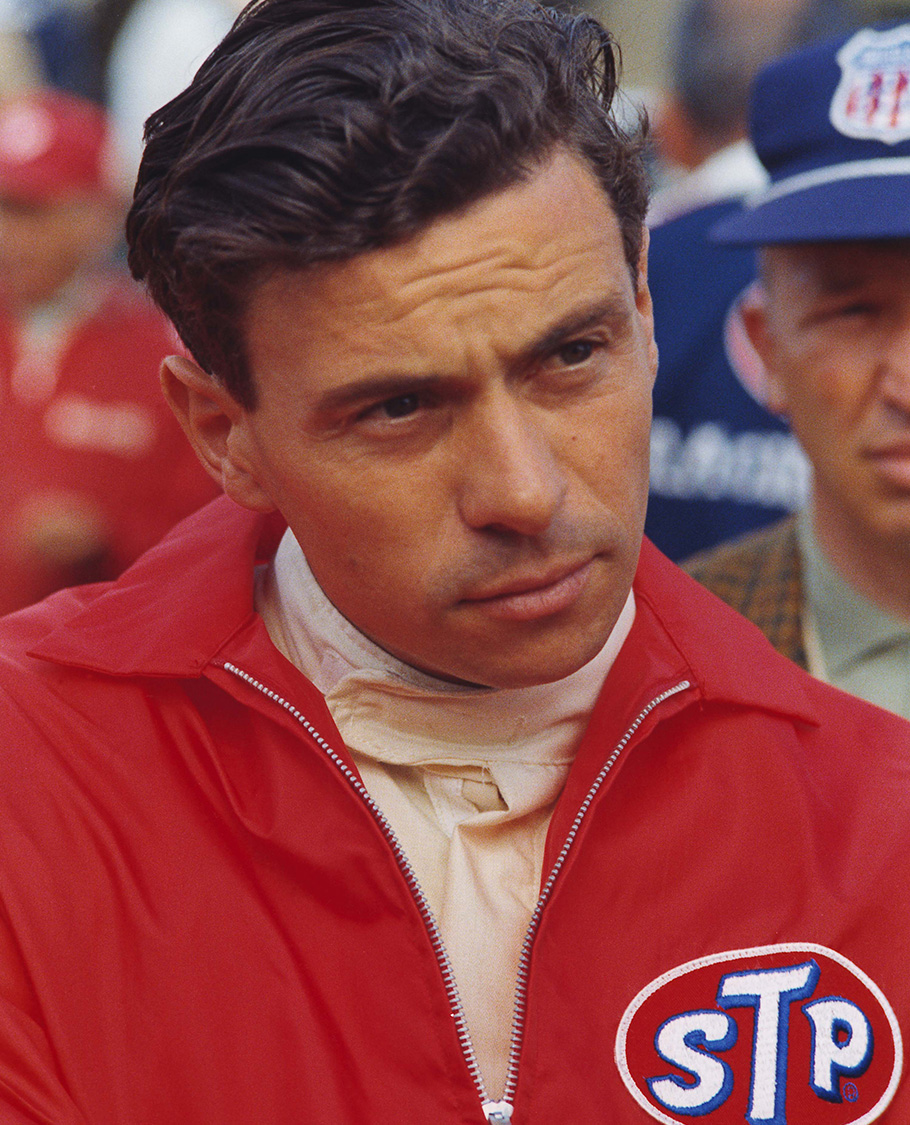 Jim Clark finished second in 1966 after twice keeping his gyrating car out of the wall: Spinning Takes Practice. His team’s lap chart had him winning nevertheless. The official charts – after a heated debate – put the Lola of rookie Graham Hill in first place.

Two years later outstanding stand-in Joe Leonard – Chapman and Granatelli had been forced by fate to rejig their line-up after the fatal accidents of Clark and Mike Spence (testing at Indy), as well Jackie Stewart’s broken wrist – was within nine laps of victory when his 4wd Lotus 56 turbine broke its fuel pump shaft at the final rolling restart.

Granatelli fought like hell to keep turbines – his was a loud, lonely, losing voice

Even more agonising had been Parnelli Jones’ near-miss of 1967.

Granatelli empowered maverick designer Ken Wallis to create a 4wd turbine, its helicopter engine mounted to the left of the driver and hung from a boxed backbone chassis.

The resultant ‘Whooshmobile’ – aka ‘Silent Sam’ – was four laps from the chequer when it coasted to a deathly halt, a $6 transmission bearing having failed.

(The STP Lotus were nowhere that year, piston failure sidelining both Clark and Hill before quarter-distance.) 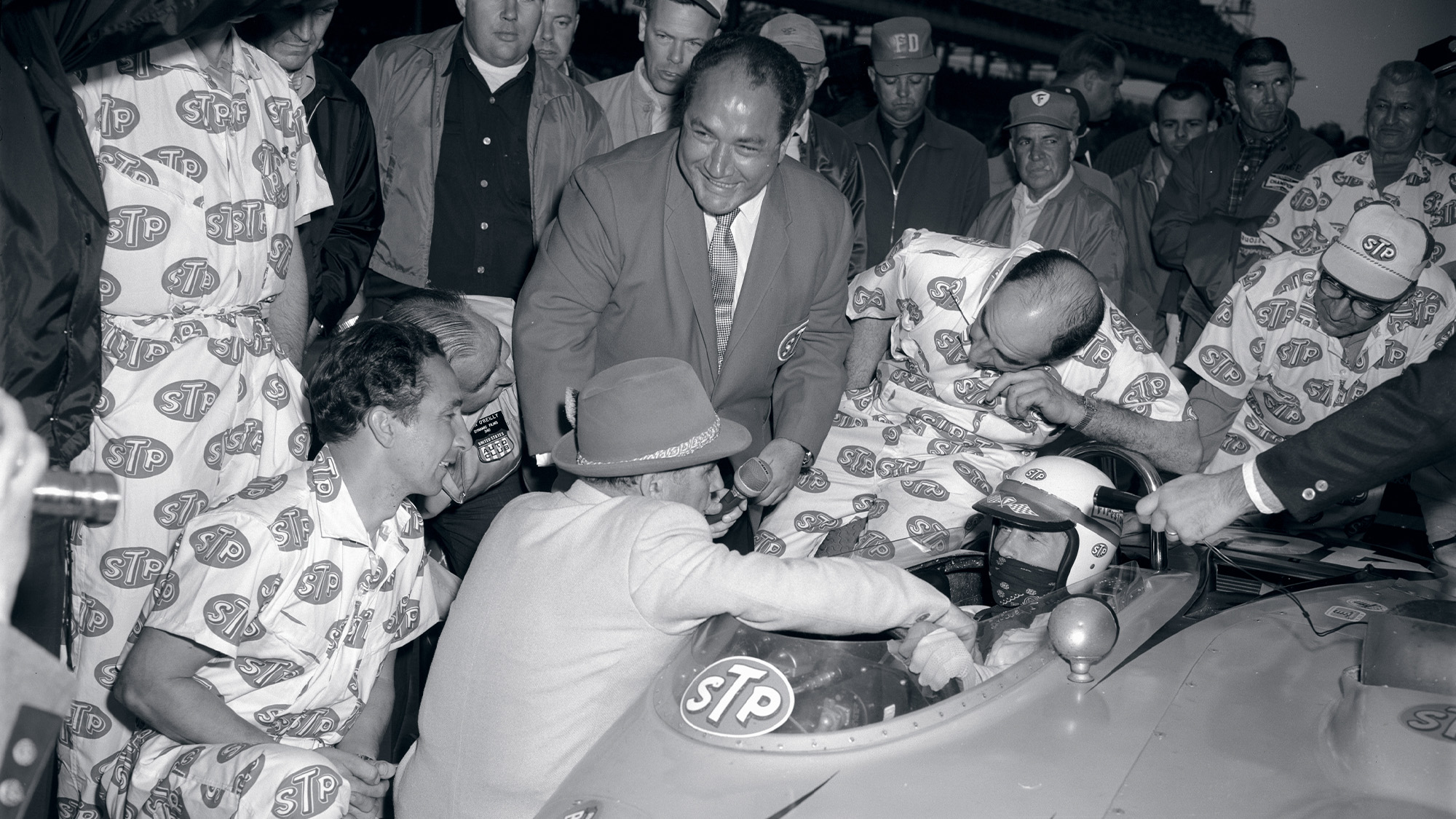 Jones qualified 6th and dominated the ’67 Indy 500 in his turbine car, only to coast to a halt four laps from the end

Granatelli fought like hell to keep turbines at the races – his was a loud, lonely, losing voice – but they were strangled by regulation before being banned in 1970.

Total traction, however, would be of (theoretical) benefit for another year and in 1969 Lotus brought its complex Ford turbo-powered Type 64 to Indy. It proved problematical, but Mario Andretti’s was fastest in practice until rear-hub failure caused it to crash heavily.

Late efforts to correct a manufacturing flaw stymied, Chapman withdrew. Worried that Granatelli might seize the cars he had them hidden in a nearby suburban garage.

Granatelli was forced to wheel out Clint Brawner’s Hawk-Ford, which Andretti had qualified fourth for the 1968 race but which retired after two laps. This time around, cheeks burnt in the accident, he qualified in the middle of the front row and led three times for a total of 116 laps to score his only Indy 500 win.

The photograph of the Victory Lane smooch between driver and team boss went around the world. 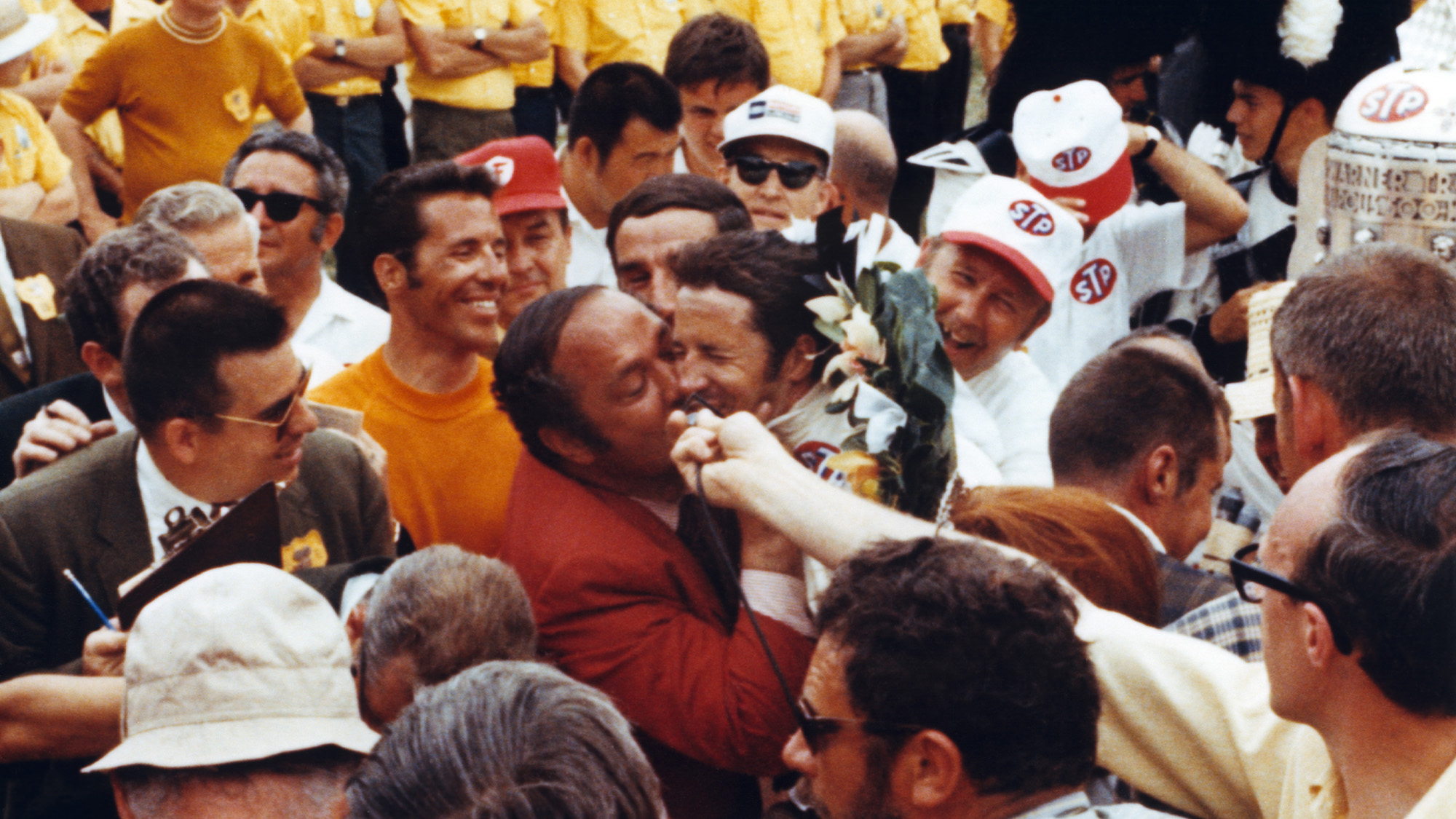 Granatelli, by now wearing a more sober suit – it was bright red! – also took the opportunity to whisper into Mario’s ear. Not sweet nothings, you understand. Rather a reminder to reinforce the benefits of STP during the imminent TV interview. Andretti, ever the pro, relayed it verbatim.

STP would win Indy again in 1973, though Gordon Johncock’s victorious Eagle was by being run by Patrick Racing.

Granatelli loved innovation and thrived on self-promotion. He starred, winningly so, in his own TV adverts and played a cameo in the film Love Bug.

Big and bold, he never shirked a challenge, even if perhaps he overcomplicated them on occasion.

Determined to bridge the notoriously stoically defended divide between Indycar and NASCAR, he eventually struck in 1972 his longest and most profitable deal – once he and ‘King Richard’ had reached a compromise over Petty Blue and STP red. 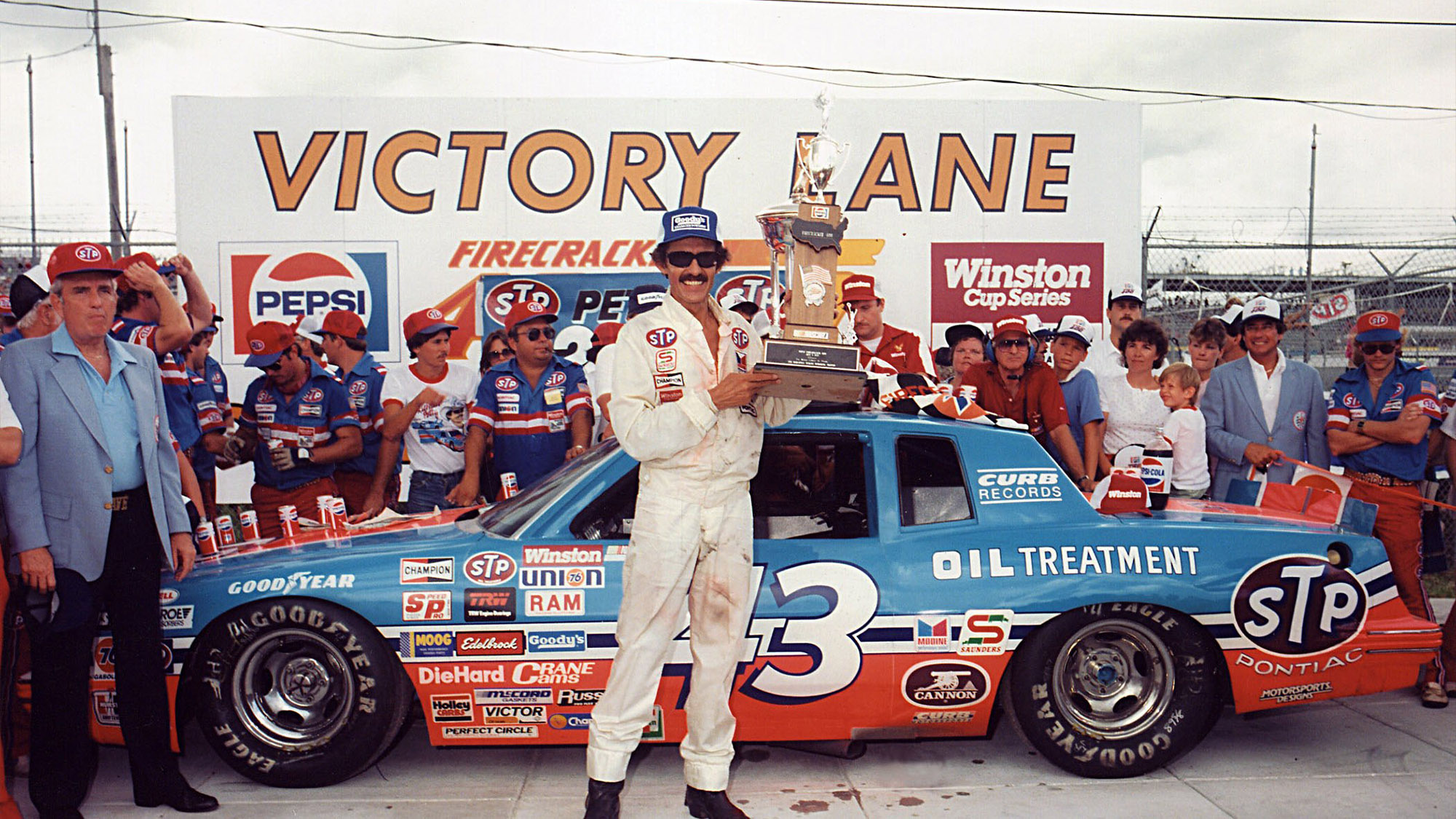 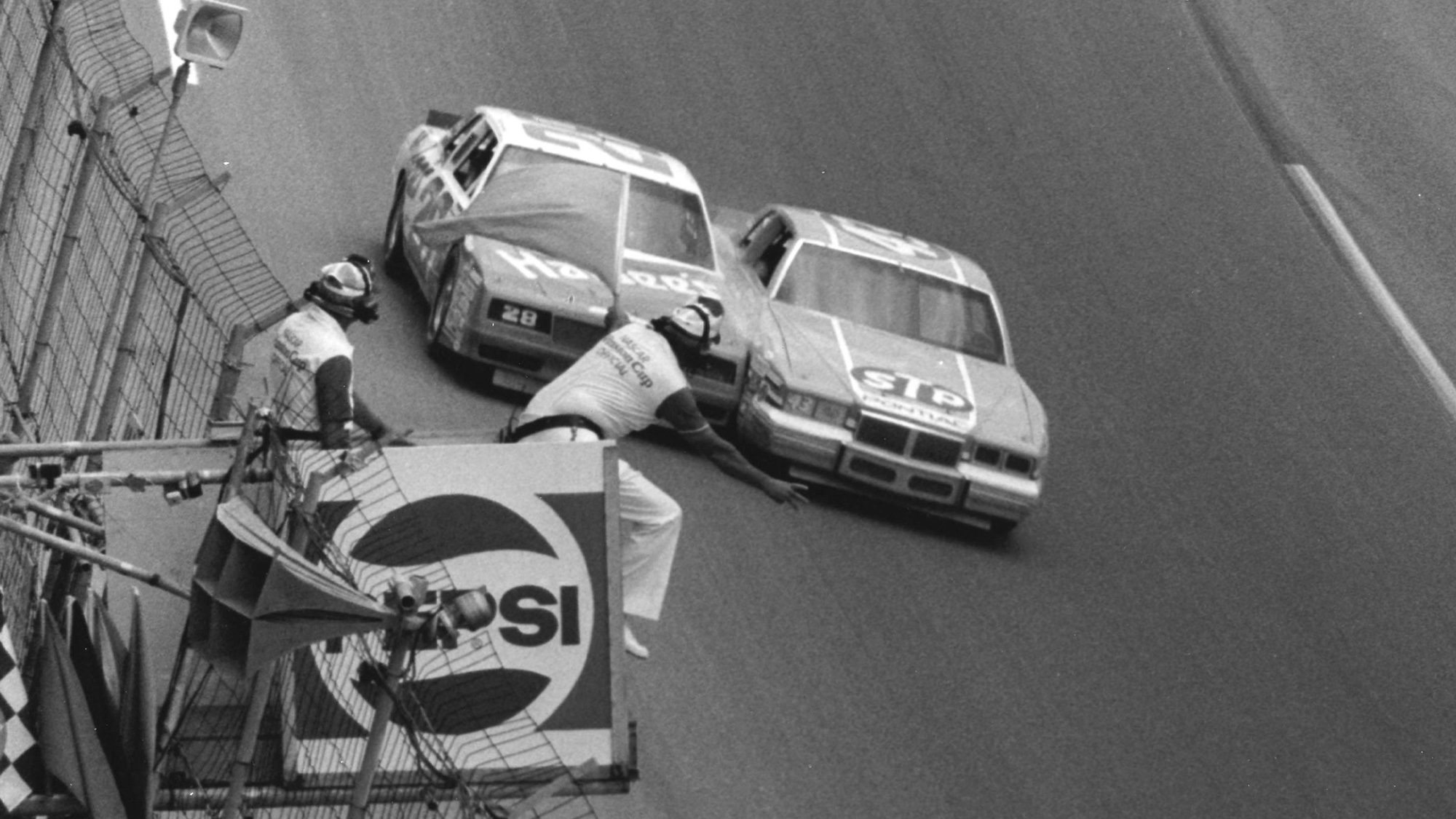 Petty edged ahead of Yarborough just before the yellow flag 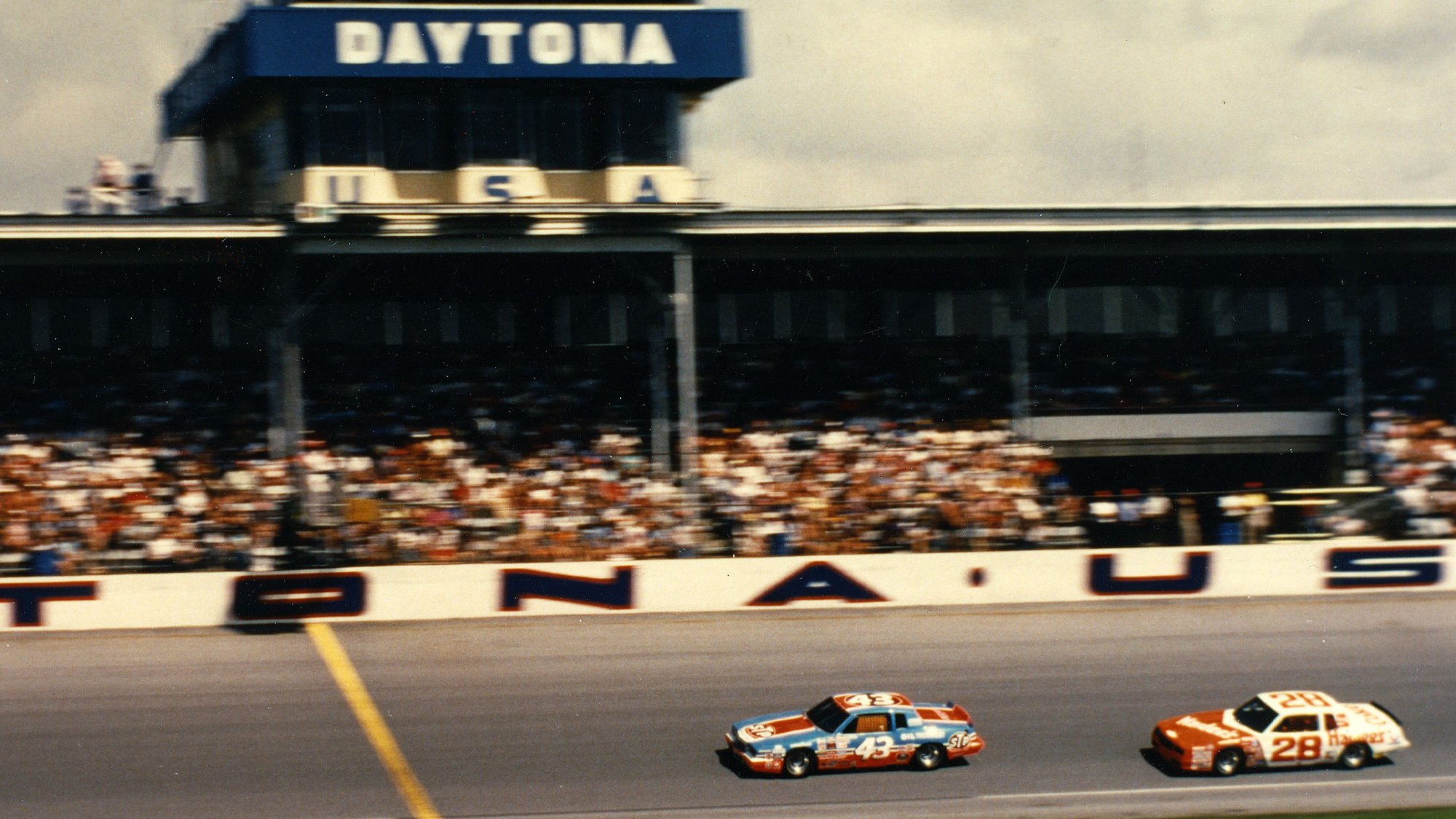 Johncock’s Wildcat would be wearing a version of this same memorable livery when he and Patrick Racing won their second Indy together – by just 0.16sec after a thrilling late duel with Rick Mears.

So, too, would be Petty’s Pontiac on the occasion of his 200th and last Grand National win – by inches in a rubbin’-is-racin’ dash with Cale Yarborough to a yellow flag with just two laps to go. He did so at Daytona. On Independence Day, 1984. In front of President Ronald Reagan.

Win or lose, no one played or staged motorsport’s theatre better than Anthony ‘Andy’ Granatelli.

He would have been 98 today.