The sign reads: “International Donington Grand Prix Car Race” but some of the pictures are more reminiscent of a country drive, with farm buildings, rolling fields and hedgerows lining the tarmac.

This was Donington Park in 1938. And in images that have never before been published, the early days of the racing circuit are revealed in colour.

Discovered by Philip Hall, an Edinburgh-based Donington devotee, the photographs show a practice session ahead of the race, with Mercedes, Auto Union, ERA and Delahaye cars on track and in the pits. 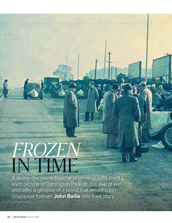 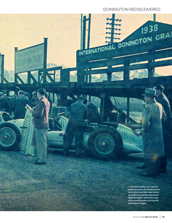 The session — along with the subsequent Grand Prix — was covered by Motor Sport in the November 1938 magazine, where Tazio Nuvolari was described “screaming towards us at 160 mph, tail sliding out so that the Auto-Union’s nose pointed directly at us, front wheels flapping wildly to retain control.”

The expanse of countryside brought its own perils: Nuvolari had a “narrow escape” when he hit a stag, Motor Sport reported, but there were also considerable benefits between track sessions.

“As I write, some of the drivers play impromptu football, others clock-golf, on the sun-lit lawn outside Donington Hall, where, as last year, they have all lunched together — all, that is, save [Dick] Seaman,” the report continues. “Seaman appeared to arrive late and to exchange a few words with [Mercedes racing manager, Alfred] Neubauer.” 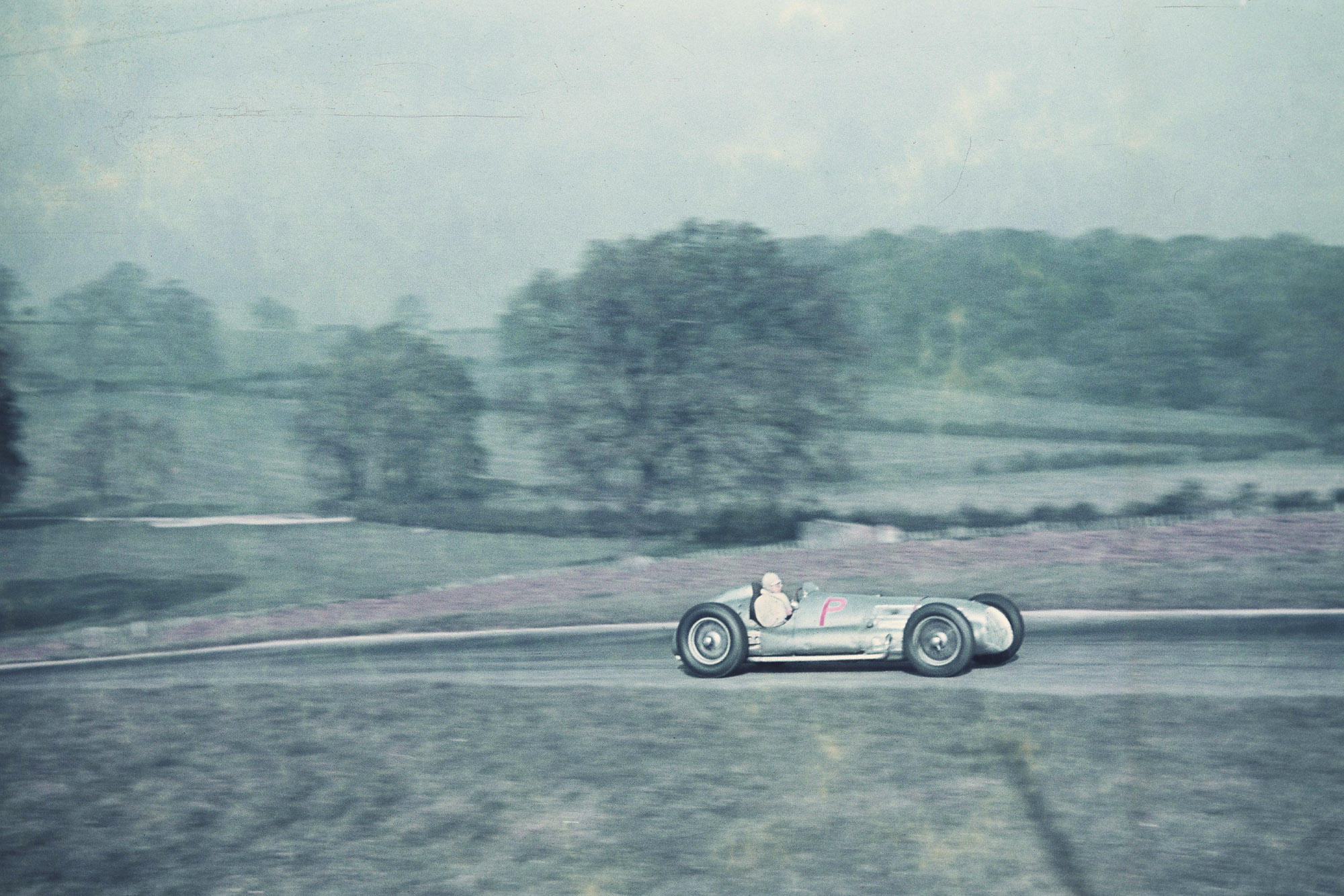 Donington’s still wooded parkland provides the backdrop for this shot of one of the Mercedes W154s on the approach to the Melbourne Brow. It shows just how steep the rise was, although the crest itself had been eased for 1938. This is presumably the team’s spare or practice car, hence the ‘P’ it carries. Or possibly it stands for Prova, left over from the team’s previous race, at Monza. Each team driver could try it to learn the circuit or bed in tyres.

Although the paddock may appear agricultural by the standards of the modern era, the international teams brought “amazingly thorough organisation” and “astoundingly complete equipment”. Mercedes also shipped across 1,100 gallons of special fuel.

You can see a full selection of photographs in the August edition of Motor Sport Magazine.

The images were passed to Motor Sport by John Bailie, author of Donington Park: the Pioneers, which tells the story of the circuit’s development since 1931, when it emerged as Britain’s first road racing track.

Created by Fred Craner and John Gillies Shields, the loose-surfaced track had, by 1938, been improved to what was then a world-class standard.

It hosted a grand prix which, Motor Sport reported was “easily the greatest British race ever held”, as Nuvolari led from the start and “the whole circuit sang to the sound and the almondy boot-polish fuel fumes became quite pungent”.

Nuvolari, “arms working like pistons” fell back after a 53sec spark plug change and slid off on oil, but recovered to find himself third behind the leading pair of Hermanns: Müller and Lang. 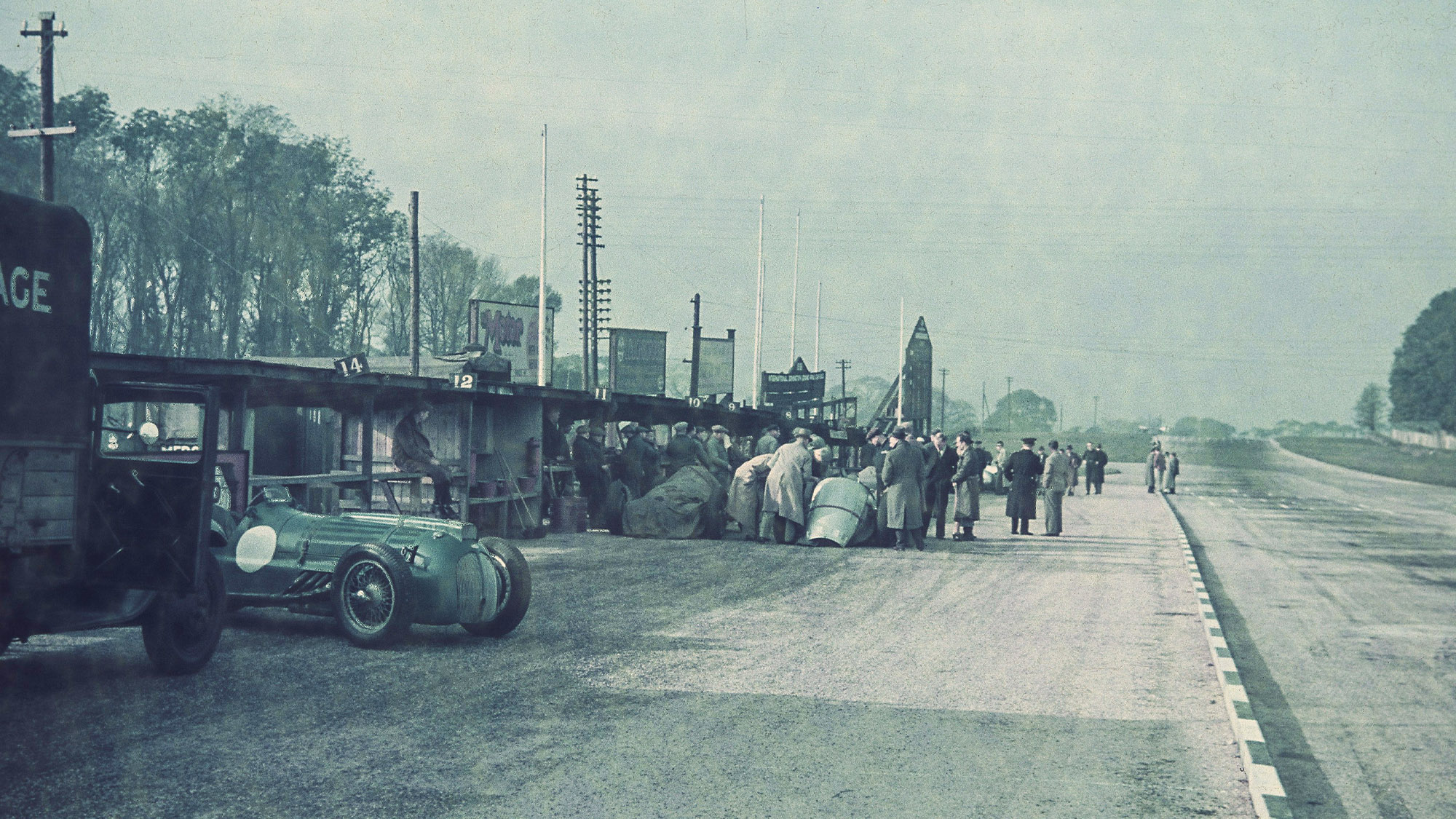 The calm before the Grand Prix storm. The ill-starred Ecurie Bleue Delahaye 155, practiced by Rene Dreyfus and “Raph”. The only one of its type, it retired early in the race, and made several unsuccessful post war appearances (not at Donington of course!) and was eventually scrapped. It sits partly obscured by the Belle Vue Garage truck, there to support the ERA of band leader Billy Cotton and Wilkie Wilkinson.
Centre stage are the secretly shrouded (plus ca change!) Mercedes W154s under the watchful eye of team chief Neubauer with the Auto Unions beyond, the recently widened start / finish straight and pit lane comparing favourably with tracks of the modern era. The scene is yet to be dressed by flags on the stark white flag poles and superstition reigns too; no pit number 13!

He sped off “in a great cloud of dust” after a speedy 35sec pitstop for tyres and fuel began a charge that saw him make up a 37sec gap to Lang in ten laps, before closing another 21sec to Müller, overtaking on Starkey’s Straight and disappearing into the distance.

The report concluded in forlorn hope: “It was a truly magnificent race and all peace-loving peoples will join with us in hoping that we may still be at peace in October 1939, and that Germany, France and Italy will again compete in our only Formula Grand Prix.”

Though the Auto-Unions no longer flex and dither as they did last year, and though the German cars no longer leap from the rise after Melbourne Corner, where the bump has been eased off, nevertheless, in speed, sound and acceleration the 3-litre Formula cars make other racing look just stupid. As I write, some of the drivers play impromptu football, others clock-golf, on the sun-lit lawn outside Donington Hall, where, as last year, they have all lunched together — all, that is, save Seaman. Seaman appeared to arrive late and to exchange a few words with Neubauer.

Early this Thursday morning Uhlenhaut took out the Mercedes training car, labelled with a big “P” and committed much lappery. This car had an extra air-temperature thermometer clamped to the scuttle side. Uhlenhaut wears full kit and will apparently be the team’s spare driver. Soon the other drivers get down to it, including Nuvolari, who sets up the fastest lap. After lunch there is less activity, Seaman doing very little and Nuvolari nothing at all. But Lang does one immense lap. Hasse, in black overalls, is very cheery, but Kautz suffers from a cold. 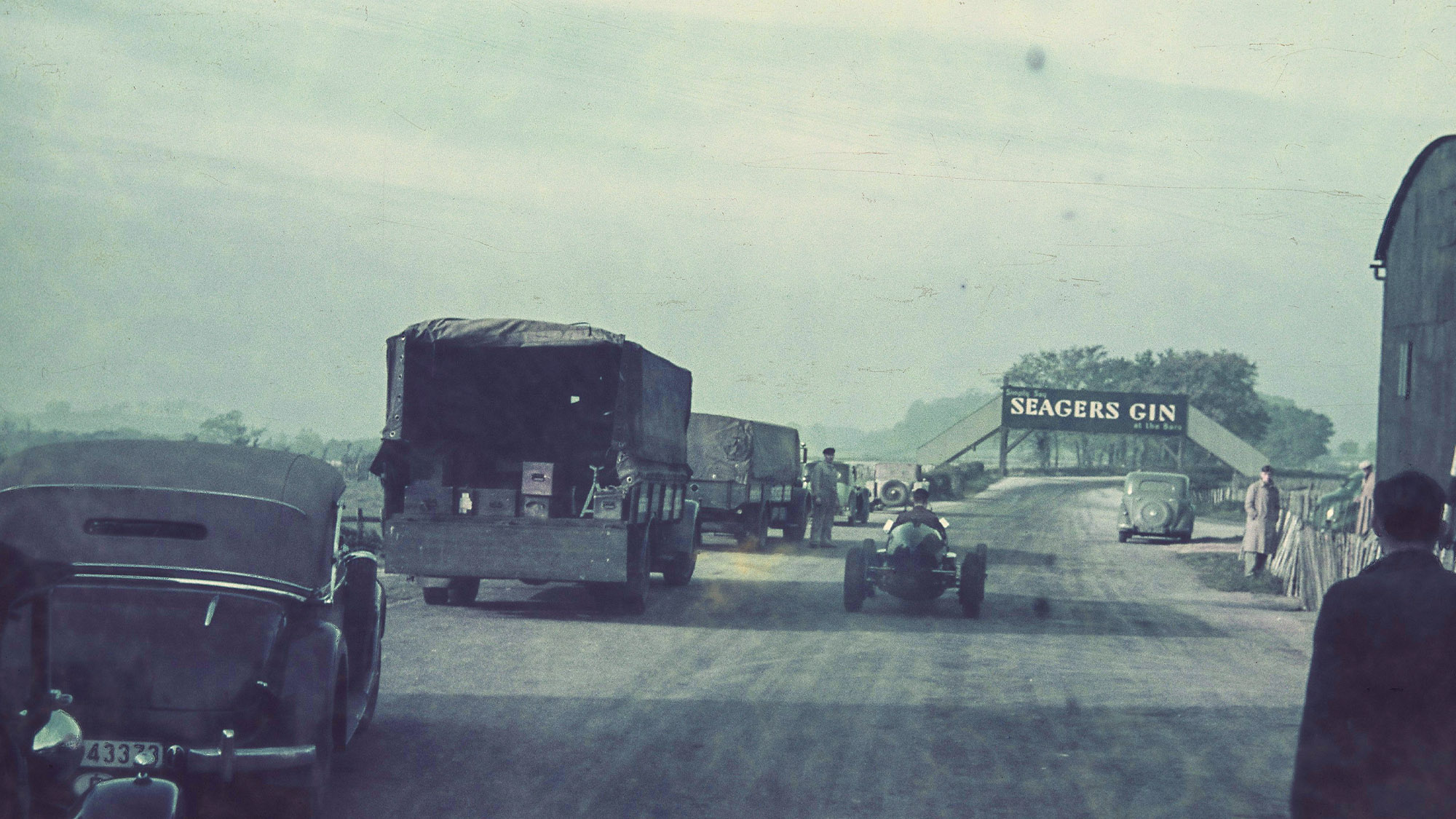 Another 1938 Donington Grand Prix practice day scene…A car departs on a shake down run along the 1 1/4 mile downhill stretch to the Melbourne Hairpin; it could be an ERA but is it the Alta of Robin Hanson that caused the drama during the race at the Old Hairpin when it liberally distributed its oil all over the track.
Another pointer to this viewpoint is that, 35 years later, Donington saviour Tom Wheatcroft would open his Grand Prix Collection museum in newly erected buildings in the area to the left of the picture. The black corrugated iron-clad Dutch barn, used by the Auto Union team as its Grand Prix base, is the dominant feature to the right. It would become the ERA company’s base for a brief period from mid 1939. It’s now on a Leicestershire farm!

To walk all round the circuit is a truly wonderful experience. Through the wood beyond Red Gate the cars sound terrific, and their speed down to the hairpin is prodigious, but perhaps the most spectacular point is from Maclean’s Corner, along the straight bit to Coppice Corner. Here one is able to appreciate very thoroughly the work done by the drivers, all of whom perspire freely after only a short spell in the ” seat of government” Hasse keeps his hands comparatively steady on the wheel on the straights and Seaman slides beautifully into Red Gate. Frequently the cars visit the grass verge at Melbourne and they come out of the woods like bombs, sliding sideways through the gate.

At the pits we see again the amazingly thorough organisation ; every lap timed, copious notes made of every piece of work undertaken, and cars continually given flag signals by their respective chiefs. At the depots one’s breath is again taken away by the astoundingly complete equipment. The tyre-store, in charge of Continentals’ imposing representative, is a wonderful sight, and Mercedes alone brought more than eleven hundred gallons of special fuel.