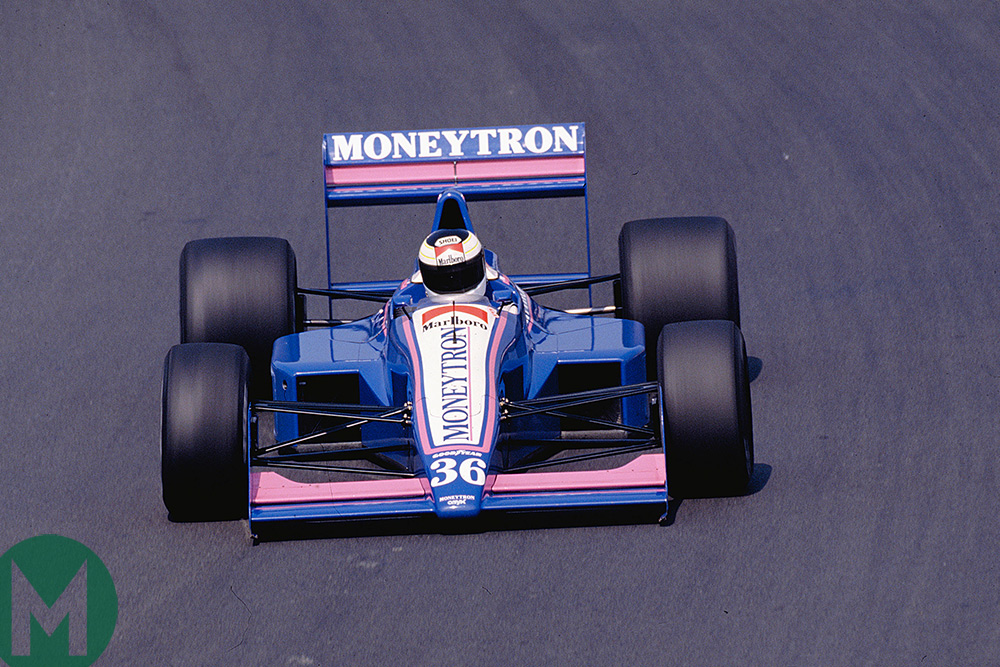 “It’s easy to forget that he spent barely a year in Formula 1 because everybody remembers him.”

Stefan Johansson refers to the Belgian academic (slash economist/financier/novelist/philosopher/politician/self-publicist) – and convicted fraudster – who in 1989 sponsored and then owned the Onyx Formula 1 team.

Jean-Pierre Van Rossem, who died on Friday aged 73, cut a wild man swathe through the paddock, with his long white hair and beard to match.

He loosed verbal broadsides at Bernie Ecclestone and Jean-Marie Balestre about how the sport was being run; fired the driver who had introduced him to the team; and, for a man who expressed Marxist sympathies, owned an awful lot of Ferraris – plus a luxury yacht and private jets.

Charisma and bombast had served him well in persuading investors that his supercomputer – codenamed Moneytron and secreted behind a locked door in true Bond villain-fashion – had cracked the stock market code. (Turns out it was a Ponzi scheme.)

But though his resultant multi-millions were welcomed in F1, he was not.

Johansson, however, saw a different side.

“He came on board after I’d signed,” says the Swede. “My first impression was, well… but as we got to know each other better over the season I realised that his public image – something he was very aware of – was much different to the private man.

“I liked him and enjoyed his company. He was funny, gentle, kind and kept his promises – although sometimes we sat in his office for days, refusing to leave until the money was transferred.”

Johansson was striving to resurrect his career having fallen out of favour at Ferrari and McLaren.

Mike Earle’s Onyx had hoped to graduate in 1988 with its Formula 3000 champion Stefano Modena and Marlboro money – plus ‘encouragement’ from none other than Enzo Ferrari – but the deal fell through.

The team from Littlehampton, however, had big ideas still and for 1989 entered two of designer Alan Jenkins’ neat ORE-1, with its customer Cosworth DFR and six-speed transverse gearbox by Xtrac.

The project ran very late – being clamped outside the venue of its London press launch didn’t help! – and Johansson and team-mate Bertrand Gachot failed to progress beyond Friday morning’s pre-qualifying for the Brazilian Grand Prix.

“That was brutal,” says Johansson. “You’d get to the track at 6am and there’d be no good-mornings; you’d just growl at everybody because you just wanted to get in the car and get it done.

“There were 12 chasing four spots in qualifying. One hour. Green track. In the dark almost. The slightest problem in the closing laps, when the best times were set, your weekend was over. Ridiculous.

“It was a pretty stout group of cars and drivers and teams, too. Often those who made it through ended up mid-grid in real Qualifying.

“Perhaps only qualifying at Indianapolis had similar pressures.”

Johansson fell at this tricky first hurdle at Imola and Monaco, too, and was applauded by the other teams when finally he made the grid in Mexico City.

He had, however, been optimistic throughout.

“My terrible [1988] season at Ligier had made the landing a little bit softer,” he half-jokes. “But also I knew that my friend Alan Jenkins had designed an incredibly good car: nimble, easy to drive, easy to dial in, and with a good operating window.

“Once we began to sort its reliability…

He finished fifth in June’s French GP at Paul Ricard.

Sadly, however, DNPQs at the subsequent British GP – plus unexpected fifth and sixth places by ‘for the chop’ Minardi – condemned Onyx to yet more Friday morning torture during the season’s second half.

And then Johansson qualified 12th at Estoril in late September.

On a grid queered by the performance of those on Pirellis – both Minardis, both Brabhams and a Dallara lay ahead of him – Johansson was on Goodyears and planning to run non-stop on its softest compound.

“I did a couple of heat cycles on the set I was going to use in the race,” he explains. “Three laps each, one on Friday, one on Saturday, which was just enough to cure them.

“Maybe they were a couple of tenths off that way but I knew that I could run to the end if I took care of them from the beginning.

“They were down to the canvas – the weave was showing through by the finish.”

After making good early progress – he was eighth after 10 laps despite nursing that rubber on full tanks – he settled into a measured groove to await further developments.

The Ferrari of Nigel Mansell and Ayrton Senna’s McLaren tangled controversially – the former had ignored black flags after reversing in the pitlane – and both brand new Williams FW13s, with whom Johansson was dicing, were hampered by overheating.

The Swede finished an incredible third.

“Everybody was over the moon,” he says. “Van Rossem, a real fan if not very knowledgeable, was ecstatic. It was fantastic because we knew that we were in good shape for the following year…

“He owed me a substantial amount in the second year of my contract and so I told him that we had a problem.

After DNQs at Phoenix and Interlagos in a car virtually unchanged since 1989, Johansson parted company from Onyx, to be replaced by new shareholder Karl Foitek’s son Gregor.

The team had arguably got ahead of itself after its Paul Ricard result and the internal struggle that ensued would see Earle leave briefly and Van Rossem assume control briefly.

The latter was making loud but ineffective noises about obtaining Porsche power for 1990. He also sacked Gachot before the Hungarian GP because of comments made to the press.

“We had been a group of guys that achieved remarkable things on the available budget,” says Johansson. “A brand new team, starting from scratch, finishing on the podium and 10th in the championship was a miracle.

“We had the ingredients to have been like Jordan.

“Being hired by Enzo Ferrari was the highlight of my F1 career, obviously, but that season with Onyx was an amazing experience.

“It was a shame Van Rossem sold up. I don’t think he was losing interest. It was more that he couldn’t support it any more.”

The greedy 1980s were over and, in 1991, Van Rossem was sentenced to five years in prison.

He promptly formed a political party – complete with eponymous acronym – and won three seats in the Federal Parliament.

More: Mike Earle – At home in a racing arena