As Ayrton Senna dominated the field at Donington Park in 1993, a 13-year-old boy in the crowd stood next to his Dad in wonderment at the Brazilian’s virtuoso display.

The teenage Jenson Button little knew that, 18 years later, he would be standing on top of a Formula 1 podium after a sensational drive in the rain at the Canadian Grand Prix.

So it’s unsurprising that both races feature in Button’s picks of the races that have shaped his career, chosen from the Motor Sport Archive.

The 2009 Formula 1 World Champion picked his six most memorable races, starting with the 1971 Monza slipstreaming classic that provided the closest grand prix finish ever recorded, just 0.61sec covering first-placed Peter Gethin and Howden Ganley in fifth. “This is the only race that I’ve picked and put in the top six that I actually wasn’t born to watch but have watched it many times since,” said Button. “It’s the closest finish in F1 history, so a fantastic race with a pretty special line up.”

The 1993 European Grand Prix at Donington comes next, followed by the 2009 Monaco Grand Prix. “This was my only pole position in Monaco, and crossing the finish line being told I was P1, that was a very very special feeling,” said Button. “On the Sunday I went on to win the race and I parked the car in the wrong place after the flag so I had to run all the way down the pit straight to collect the trophy from the prince”. 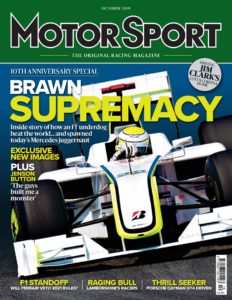 It was also the year that Brawn GP burst out of the winter break with a championship-winning car bequeathed to the team by Honda. Button has also chosen that year’s Brazilian Grand Prix where a fifth-place finish sealed his title in what he describes as “possibly the most important day of my life before I had kids”

The post-race celebrations are the stuff of legend, but Button retains the memory of stepping out of his car as a Formula 1 champion for the first time. “The first person I saw was my father who, you know, is the reason why I was racing, so it was a very special moment,” he says.

After Button’s drive from last to first for McLaren at the 2011 Canadian Grand Prix, the final race in his list is the 2015 World Endurance Championship round at Silverstone. “I know it may seem an unusual one to pick but for me it was the fight between the Porsche and the Audi. I think that battle will go down in history and it will just be good to take people back to the battles that you get in sportscar racing and WEC”

“We are moving forward at such a fast pace that we often forget moments and learnings from the past in our sport,” said Button. “Motor racing has evolved so much over the last 100 years and certainly since I started out in the sport, it’s good to go back in time and relive some of the events that have shaped the sport to what it is today.”

Every issue of Motor Sport, from the very first magazine published in 1924, is available to view online in our Archive. Now, for the first time, selected issues from our history are also available on the digital magazine subscription app Readly. For readers without an extensive collection of back issues, the page-turner format is the closest you’ll get to reading each one as intended, with original advertisements included among the reports.

More magazines will continue to be added to the newly-launched Readly Retros collection, from each decade of our history.