Its target was a distance record almost 50 years old.

Upon its completion of the 548th lap of the Fort Stockton 7.7-mile banked circle it achieved something that had proved beyond speed king Mickey Thompson and future Formula 1 driver Danny Ongais and their souped-up Ford Mustang of 1968: it had put more miles into a day than the purest of record-breakers.

Jenkins didn’t so much as pick up a speeding ticket.

Though he had a relief driver in the form of Indy 500 regular and Hollywood stuntman Cliff Bergere, this 57-year-old from Utah did the majority of the driving of his bruising, bellowing aero-engined special. Yet when he hopped down from it he looked fresh and ready to go again.

A clean-living Mormon who neither smoked nor drank, the PR-savvy Jenkins would give himself a wash and a shave while completing the last few laps of the 10-mile (or 12-) circle drawn on his beloved Bonneville.

It was Jenkins who made these windblown salt flats famous as the ‘Speed Capital of the World’. Not only did he encourage John Cobb to come over from Britain in 1935, but also he put him up at his own home, handed him his August slot on the flats and cheered when the Napier-Railton beat his own 24-hour record. 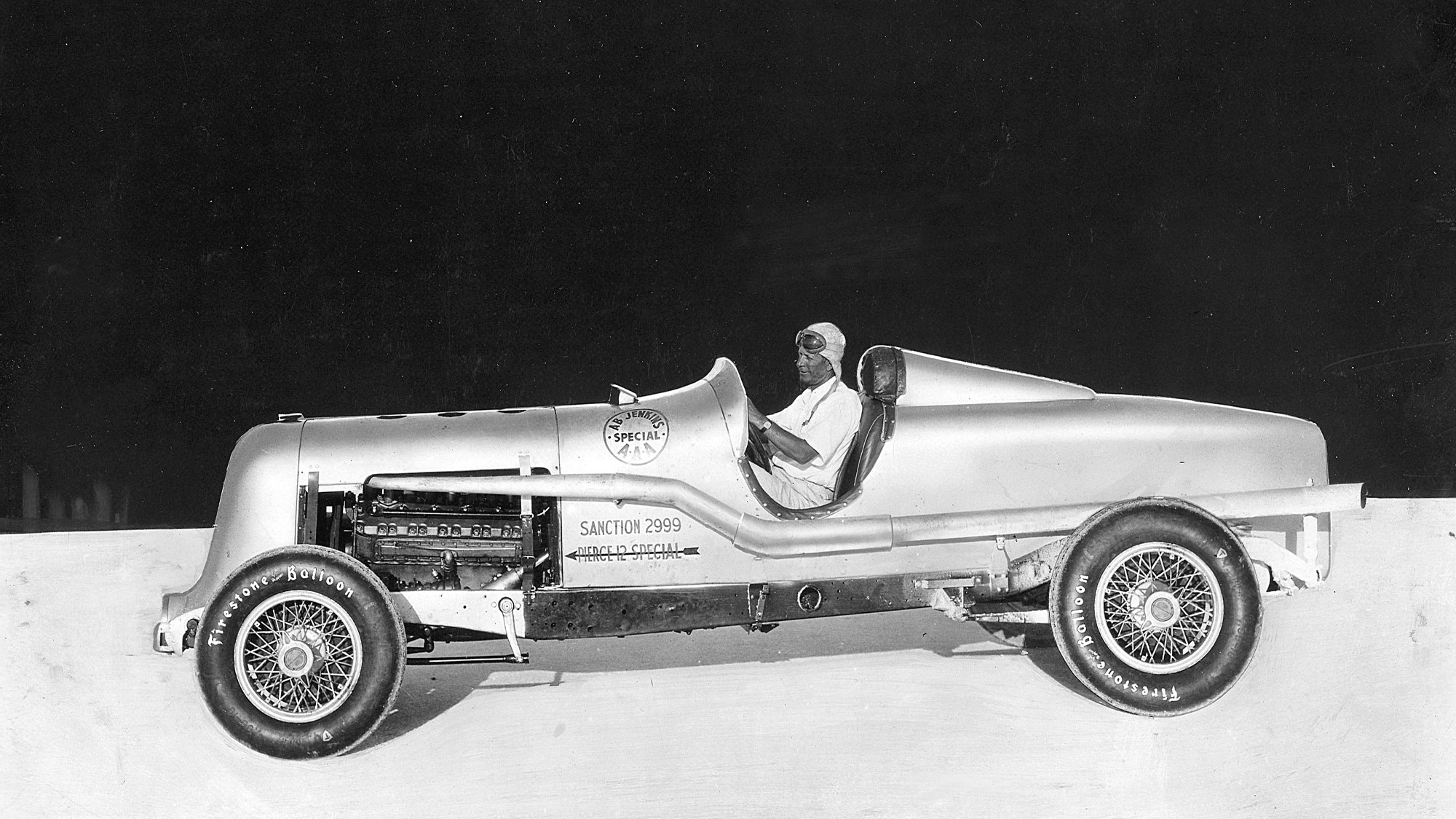 Jenkins at the wheel of his Pierce-Arrow Special in 1934

Though his was a lonely pursuit, he wanted others to share it, to raise its profile as well as speeds.

Sir Malcolm Campbell, convinced that Daytona’s beach was now too narrow for his purposes, also fell under Bonneville’s spell – and broke the Land Speed Record’s 300mph barrier there in Bluebird in September 1935.

David Abbott Jenkins, born on this day 138 years ago, had been in thrall to speed since his collegiate athletic days, racing bicycles and motorbikes over distances short and epic before switching to cars.

He earned notoriety for himself and Studebaker by setting city-to-city and coast-to-coast records – often racing against a train – during the second half of the 1920s. These bids were planned and executed with precision, promoted and publicised with vision.

That Jenkins would cover hundreds of thousands of miles at the edge of performance without suffering an accident is indicative of his mental and physical approach and application.

He didn’t so much as pick up a speeding ticket.

Jenkins at 133mph in his Pierce-Arrow Special

The space – speed with (relative) safety – that Bonneville provided was the perfect canvas for him. Linen helmet cinched, face smeared with grease against the sun’s glare, and goggles adjusted, he would hunker down in his (usually open) cockpit and (metaphorically) put his shoulder to the wheel. His concentration and fitness levels were phenomenal, his faith in God unswerving.

Pierce-Arrow, keen to promote its lacklustre V12, approached Jenkins and in 1931 he crammed 2710 miles into a day in a car long in the tooth and rudimentary of appearance.

But it was his next car for which he will be forever remembered: a supercharged 400bhp straight-eight Duesenberg fitted with a streamlined body designed by eye by ace coachbuilder J Herbert Newport and painted an eye-catching ivory yellow. 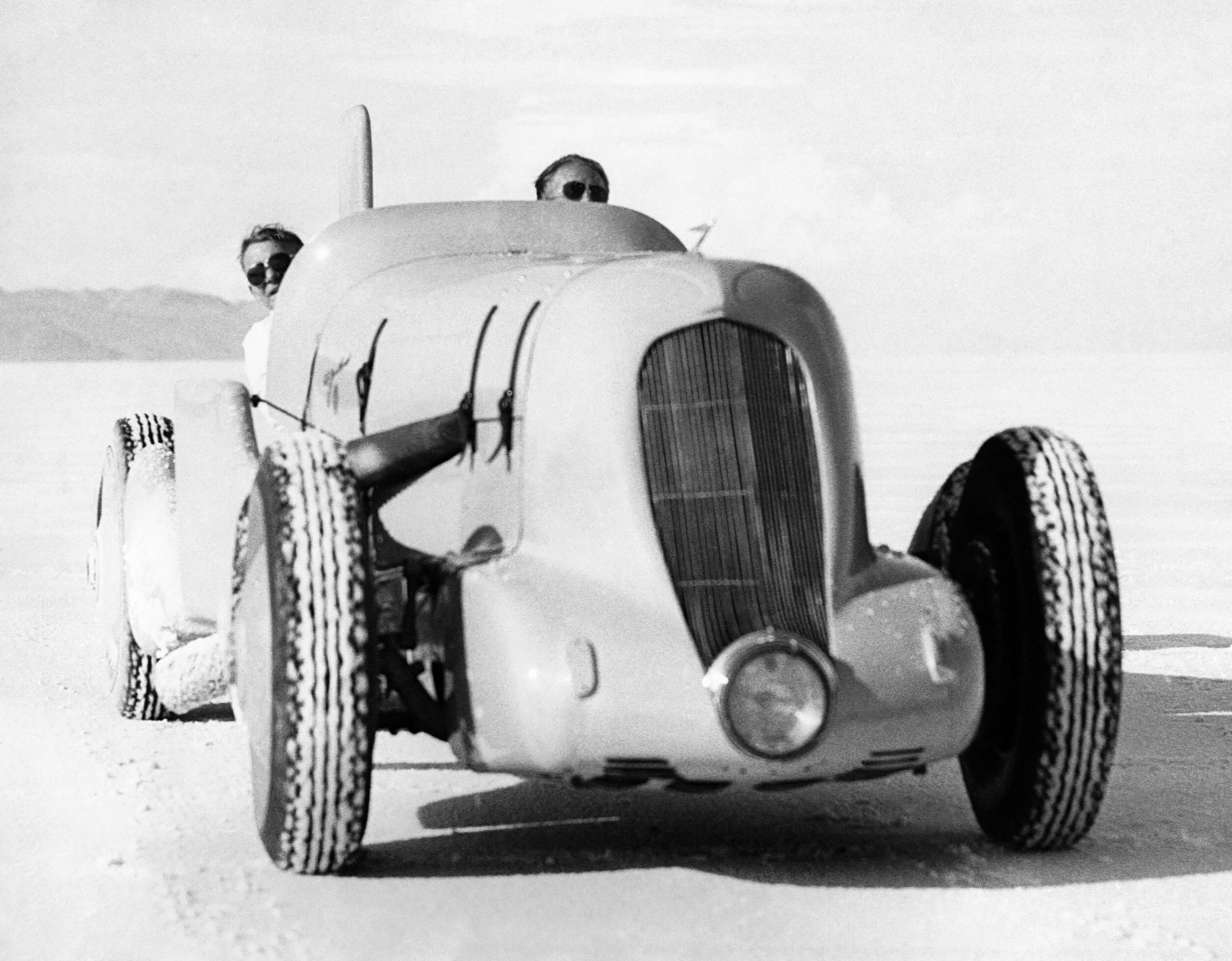 The Mormon Meteor at Bonneville: 1935

It was, however, not yet called the Mormon Meteor. That would come with its second iteration – and following a competition held by the local Deseret News paper.

Jenkins had quickly realised that he needed more power if he was to beat the British at his own game, and so squeezed a 26-litre V12 Curtiss Conqueror into the chassis. 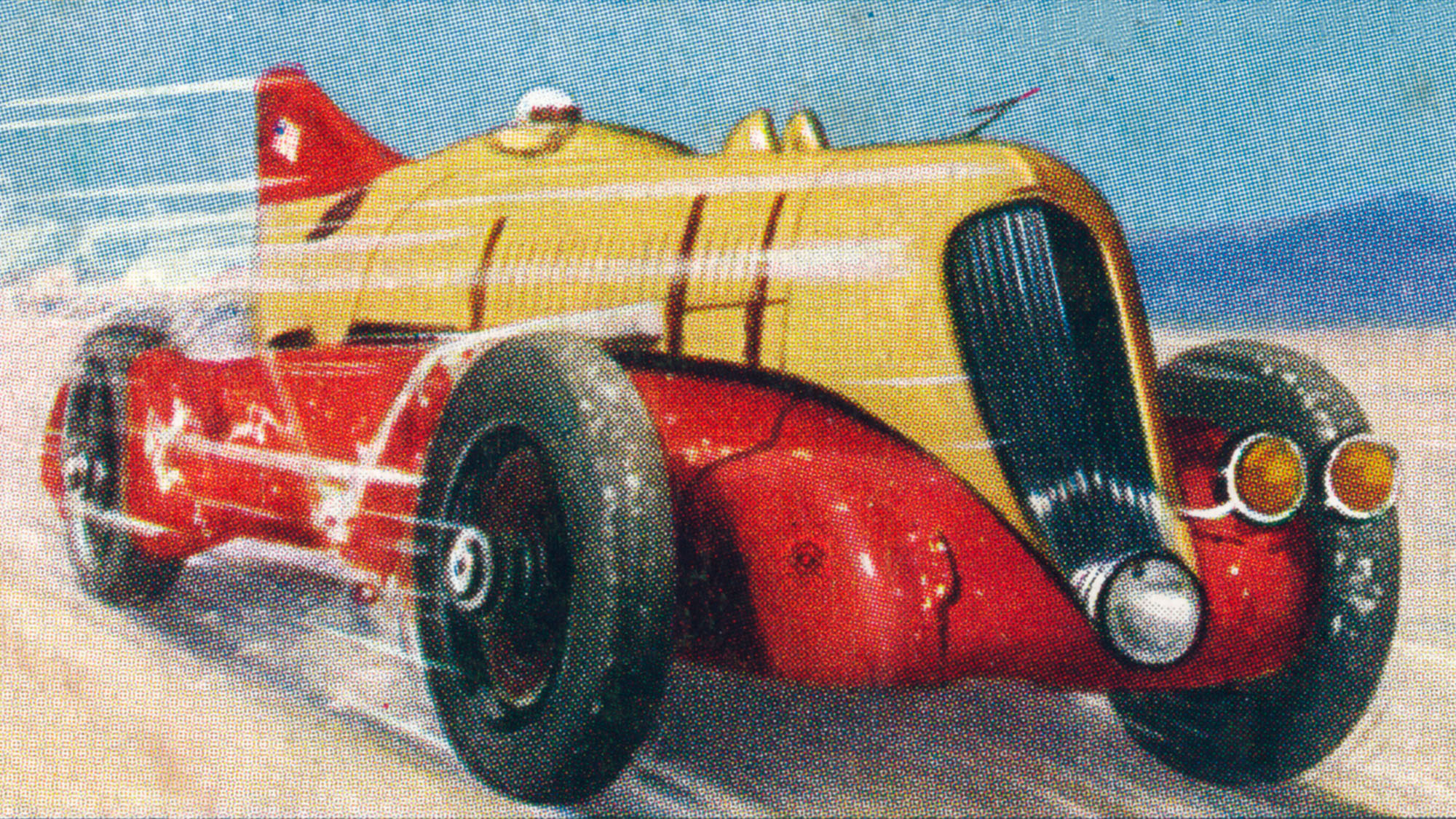 Speed, and a striking livery: the Mormon Meteor was unmissable

Jenkins now decided that a purpose-built chassis could be put off no longer. He turned to Augie Duesenberg – freelance after the folding of his eponymous company – and sent 17-year-old Marvin to Indianapolis to help with the car’s build.

In the meantime, the restless Jenkins raised his 24-hour record to 157.27mph – with relief from recently crowned three-time Indy winner Lou Meyer; the biggest names in American motorsport were happy to be associated with this building contractor of Welsh immigrant stock.

Mormon Meteor III was 21ft-long but narrower, its body offset by six inches to the left to encourage turn-in, its cockpit enclosed; Jenkins was going soft! There was a plan to fit two engines and bid for the LSR in 4WD form. For now, however, its single Curtiss was placed in the conventional position and drove the rear wheels via a three-speed gearbox.

Its front suspension was independent, its brakes hydraulic; those 112-gallon refuelling stops were carefully choreographed and any time saved while slowing for and accelerating from them was a boon in Jenkins’ whirring mind. 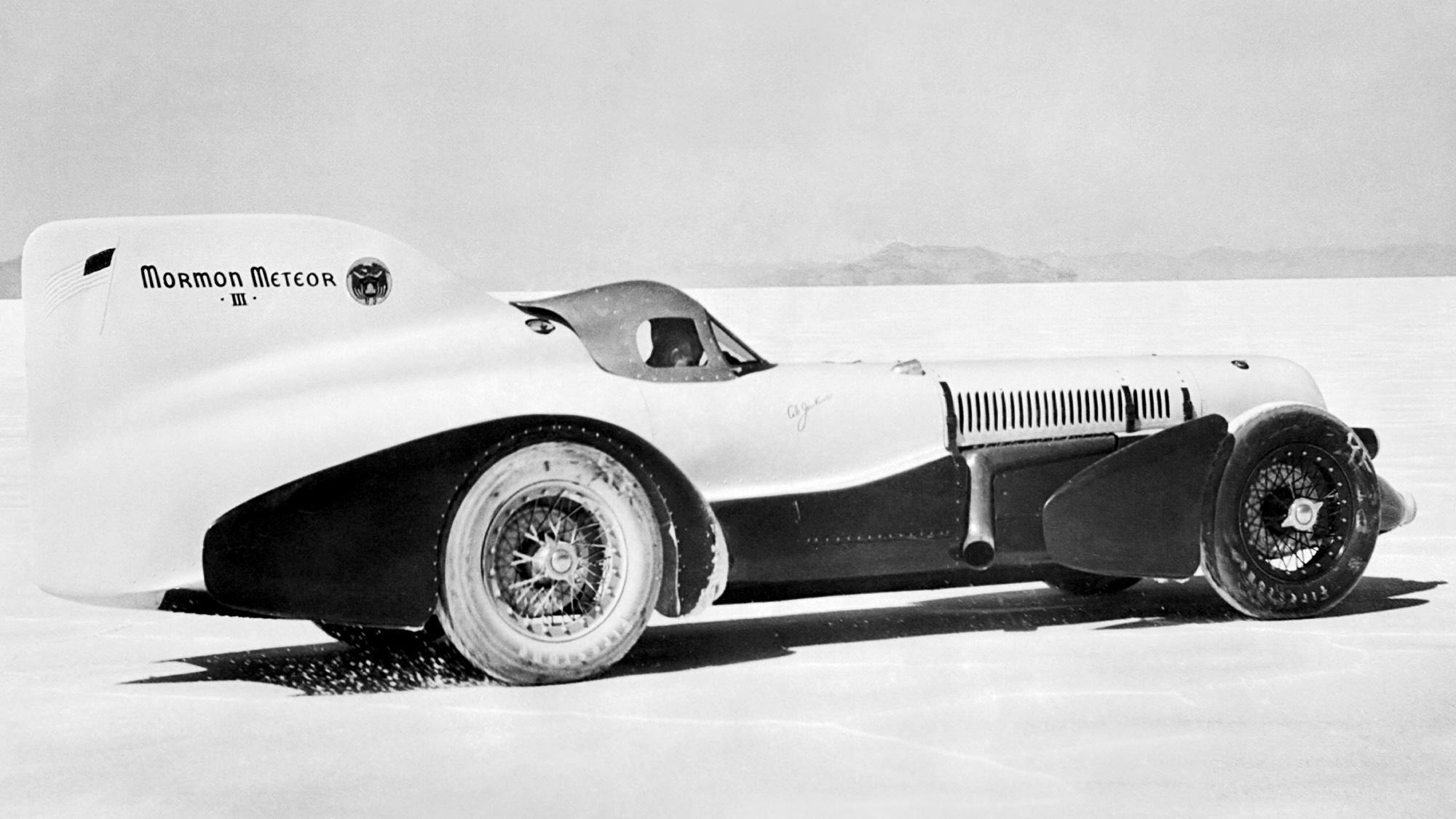 Readied by 1938, and painted in the orange-and-blue of principal sponsor Firestone, the car was tested at the Brickyard before arriving at its spiritual home.

Its bids at Bonneville in 1939 were spoiled by fire – Marvin rescued his father from a cramped and smoky cockpit – and a cracked header.

It would take a world war to stop Jenkins – during which time his popularity guaranteed his mayoralty of Salt Lake City despite no canvassing on his own part.

He sold the car to the Utah state for $1 on the understanding that he could borrow it when (not if) he needed it.

Plans to fit a pair of aero-engines – this time a brace of V12 Allisons from a Lockheed P-38 Lightning – were again shelved when Cobb’s Railton Special put the LSR beyond Jenkins’ reach, at 394mph, in 1947.

Otherwise, records continued to tumble – 30 in 1950; and 22 more in 1951 – until the clutch locked up at more than 200mph. The result skid – even though he recovered it and limited damage to a radiator burst against a course marker – convinced Jenkins enough was enough. 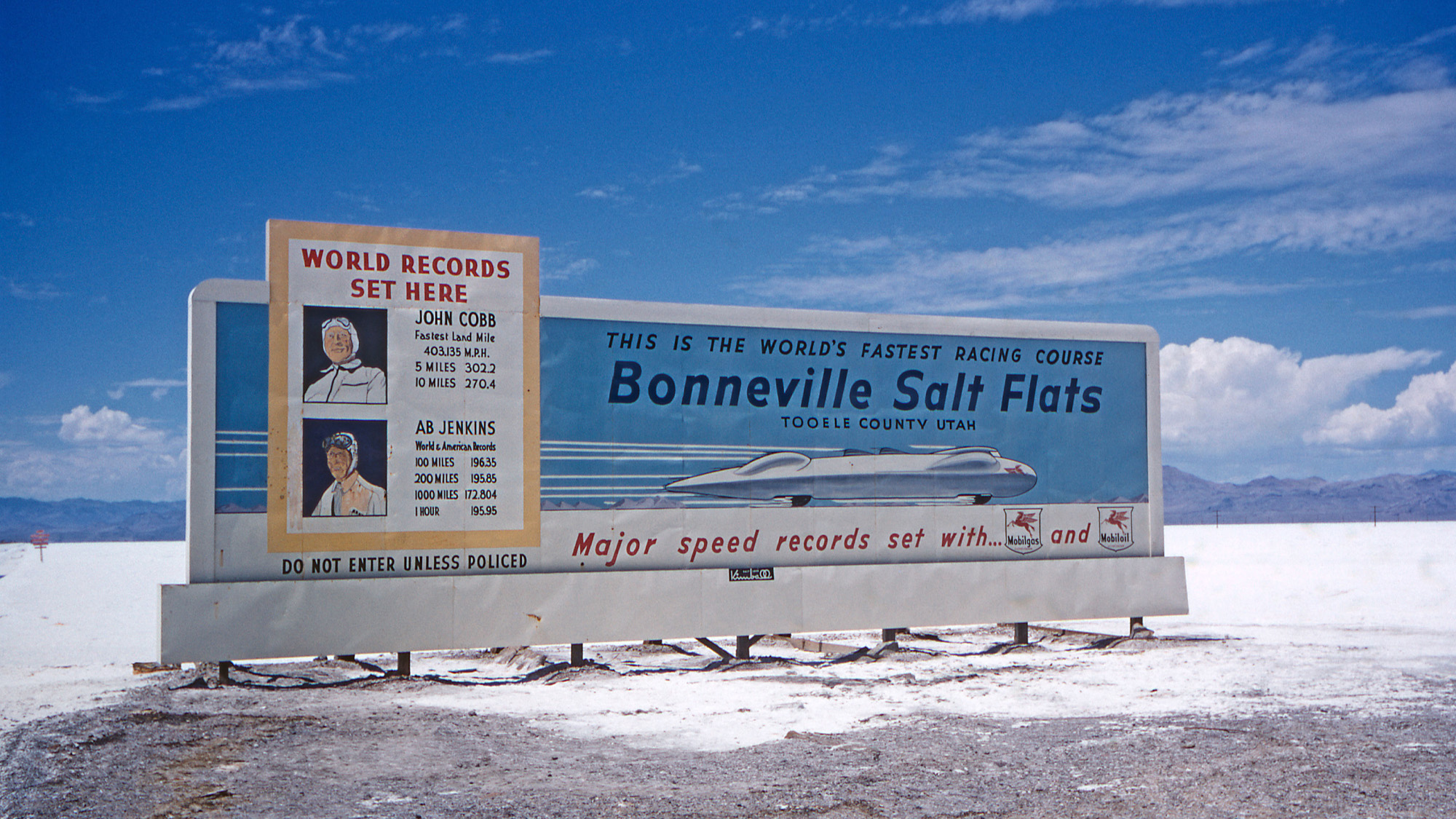 Jenkins retained star billing at Bonneville into the fifties – alongside Cobb

Until Pontiac coaxed him from retirement in 1956 and he and Marvin broke a heap of records in a Series 860 two-door sedan.

Jenkins was 73 but looked younger – he had driven the majority of those miles in that Pontiac – and so it was a huge surprise when he clutched his chest and dropped down dead in August that year.

He did so while reminiscing about his setting a speed record for tractors at Bonneville in 1935.

It had apparently been his wildest ride.