After setting the goal of hitting 500mph, Bloodhound’s land speed record car has already broken that barrier and can go faster still according to pilot Andy Green 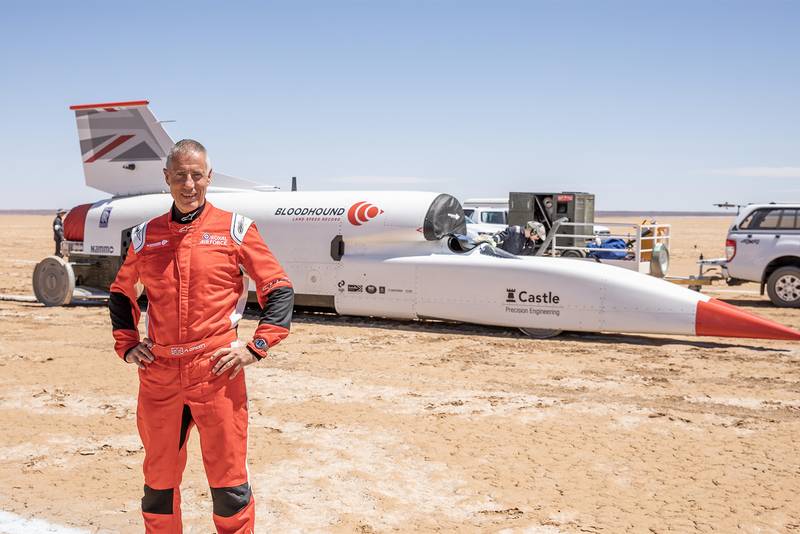 Less than a year ago, the Bloodhound SSC Land Speed Record project seemed as dead in a ditch as Boris’ plan to take us out of the EU on October 31. The money had run out, the receivers had been appointed but no new buyer found. It was over.

And yet, yesterday, Wing Commander Andy Green shot across South Africa’s Northern Cape at over 500mph. The car was the same albeit repainted, the project the same albeit it renamed Bloodhound LSR. And when he was done and de-briefed, he called me up.

“It’s really gone fantastically well,” he says in tones that somehow are true to a man with the heart of an unconquerable enthusiast yet with the cool, analytical brain of the RAF fighter pilot. He is, of course, both. “If the weather turned and we had to go home tomorrow, we’d still be really happy.”

And with good reason. From nowhere Bloodhound has risen and achieved in less than a year what the project had not managed in the previous decade: put some tangible, impressive results on the table.

This stuff really matters. It matters for all sorts of practical reasons: Bloodhound is a bespoke and very complicated prototype that, like all such machines, needs debugging. The team needs to prove that the car behaves in practice in exactly the same way the simulations suggest

“The rocket fitted over the winter will move the centre of gravity rearward and make the car more unstable, which will actually help”

They have to find out about a surface upon which no LSR car has ever run before, they have to test parachutes, test the team itself and the myriad responsibilities of its members. And, of course, they have to go bloody fast.

But it matters most because without those results, the investment that’s going to get this car over the line – which means a new Land Speed Record and probably cracking 800mph – simply isn’t going to come.

The Bloodhound LSR team will rightly judge themselves by what they feel capable of achieving; everyone else will judge them by what they’ve achieved. And before they came to Hakskeenpan, that amounted to one run down the runway of Newquay airport at around 200mph over two years ago.

Compared to some LSR teams, the reincarnated Bloodhound has had a dream start in the desert. Remember Richard Noble and Thrust 2? He got rained off Bonneville two years in a row before finally setting the record at Black Rock in Nevada in 1983.

Not that Bloodhound has been entirely without problem: “we’ve had some electronic niggles and some bodywork issues, but absolutely nothing major.” Andy doesn’t mention the fire warning alarm that went off in the cockpit during his run today. Clearly doesn’t even rate as a niggle.

Even so, if you ask Green to project forward, the enthusiast excuses himself and the analytical fighter pilot replies: “I don’t want to say how fast we can go because everything depends on the weather and we’re having an unseasonably hot spring here which isn’t good for starting the jet.”

When I hold a virtual gun to his head he concedes that if they tried and if all conditions were right, “600mph might be possible.”

His caution is understandable. Bloodhound SSC blew in on a promise of 1000mph and blew out again ten years later with barely a fifth of that achieved, no faster indeed than any number of street-legal supercars can go today.

Someone from the team has already told me that 1000mph is now more an aspiration than an aim and that they wished everyone had been clearer about that from the start.

By contrast, Bloodhound LSR has reversed the trend and so far, has a record of under-promising and over-delivering. Not so good for a hack in search of a headline, but far better for the long-term sustainability of the project. 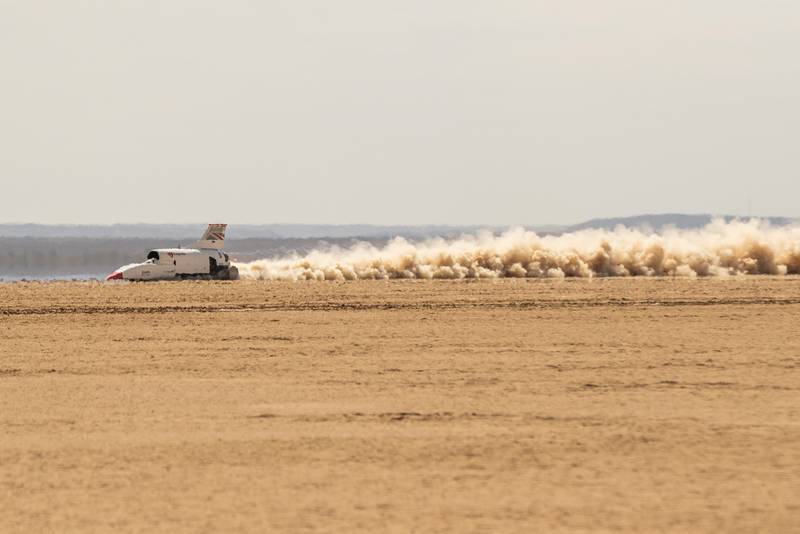 As to how Bloodhound compares with Thrust SSC, Green is far less cagey. “Fundamentally it’s a much nicer car to drive. It doesn’t have that strange rear-wheel steering that took me an age to understand with Thrust SSC.

“But here we have another problem: the surface at Black Rock was much softer, so the wheels bit further into it and provided far more lateral grip. Here the car is much more susceptible to being deflected by the wind, which is why we have set a very modest crosswind limit of 10mph.

“When we get the rocket fitted over the winter that will move the centre of gravity rearward and make the car more unstable, which will actually help…”

Green reckons they’ll be a week or two more in the desert before heading home. The team has already done what it set out to achieve and while there is much work remaining that can be done, the main job of proving to the outside world that they have built a potential Land Speed Record breaker is complete. Now they just need the funds to finish the job.

Jessi Combs has been posthumously awarded the title of the fastest woman on land, ten months after a fatal crash during the attempt. The 36-year-old broke the record with a…

What would happen if you put a Formula 1 car alongside a normal road car, a Bugatti Chiron and the Bloodhound Land Speed Record car? Bloodhound has obliged and released…

The man behind Britain's Bloodhound land speed record attempt has warned that the project could be closed down if it doesn't hit its £8million funding goal. Ian Warhurst, who has…