The man behind Britain’s Bloodhound land speed record attempt has warned that the project could be closed down if it doesn’t hit its £8million funding goal.

Ian Warhurst, who has already rescued the venture from administration, warned that the team is running out of time to prepare the car for a record attempt in South Africa next summer, raising the “devastating” prospect of having to abandon the bid.

Bloodhound Land Speed Record (LSR) needs to raise the total by the end of this month, so it can add a rocket and upgrade the car in time for the 2021 window in the Kalahari desert, where weather conditions are expected to be favourable.

“The clock is ticking to raise the necessary investment to re-group the team and crack on with the rocket program and other car upgrades in time to hit our 2021 deadlines,” Bloodhound CEO Warhurst said.

“If we miss our cool weather window in July and August, temperatures in the Kalahari will make running a rocket untenable next year.

“The project remains dormant whilst we try to secure the funding but at a cost of tens of thousands per month of overheads, and the threat that we miss the weather window next year, we cannot remain dormant for long.

“After all that this project has achieved in the past year to prove its viability, it would be devastating to end here when we are so close. We remain optimistic but really are running out of time” 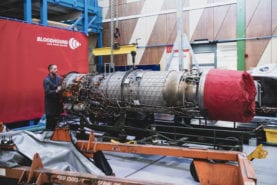 Last year, the team travelled to South Africa for high speed testing and recorded a top speed of 628mph on the Hakskeenpan as part of successful trial runs.

The tests showed that the car should be able to break the 800mph barrier when fitted with a monopropellant rocket, which will be fired in conjunction with the EJ200 jet engine already fitted to the car.

The complex hydrogen-peroxide  rocket, designed by Norwegian specialist Nammo, pumps H2O2 molecules at high pressure through a gauze which will act as a catalyst and split them into super-heated steam.

The steam will be channelled through a nozzle in order to generate thrust.

Bloodhound fell into administration in late 2018, after runway testing in its previous incarnation as Bloodhound SSC. The project was rescued by Warhurst, who bought all assets and equipment for an undisclosed figure, car included.

Warhurst said that potential sponsors would have enjoyed a significant return on investment had they been a part of the testing in October and November last year.

“Independent analysis of the media coverage of Bloodhound LSR’s successful high-speed test programme concluded sponsors would have received a 14:1 return on their investment (ROI). Conservative estimates of the coverage for an actual land speed record attempt in 2021 are that it will be at least four times that of high-speed testing – and it is likely to be higher.

“This means the sponsorship opportunity would give a predicted ROI of 18:1 and probably much more. For the first time, we now have a valid ROI figure that sponsors need in order to invest.