Wearing a red baseball cap around the United States can signify a lot of things. It could mean you’re a huge St. Louis Cardinals fan, or maybe you’re a MAGA diehard still fighting to “stop the steal.” But if you’re at the Bonneville Salt Flats, wearing a red hat means you’re a life member of the royal family of land-speed racing – the 200 Mile Per Hour Club.

There’s only one way to join the club. Not only do you have to post a speed greater than 200 miles per hour – duh! – but you also have to break a class record. As I can attest from personal experience, it’s a lot harder than it sounds. For Bob Sirna, the quest began in 2001, and the travails he’s endured could fill a book.

But good things come to those who persevere. During Speed Week this past month, the 78-year-old Sirna drove a Mercedes-powered 1929 Ford Model A roadster to a class record by going 204.074mph, which earned him a coveted red hat.

“I wore it to bed that first night,” he tells me.

Educated as a mechanical engineer, Sirna worked as a designer at Ford before moving to IBM and then opening his own company in the emerging computer industry. He started SCCA club racing when he was 50. A few years later, after his wife informed him that she no longer planned to ride shotgun in the hot, claustrophobic cockpit of his 1955 Mercedes-Benz 300 SL Gullwing, he converted it into a vintage racer. In 2001, two friends encouraged him to tow the car to Bonneville, where he was infected with the chronic disease known as “salt fever.”

“The only way to cure a bad case of salt fever is to die,” he says. “And then you have your buddies spread your ashes out on the salt.”

The Gullwing was among the coolest-looking production-based cars ever to race at Bonneville. The shape was excellent aerodynamically straight out of the box. But despite designing new cams, doing plenty of head work and solving significant harmonic problems over the years, Sirna maxxed out at 162 miles per hour, well short of breaking the record.

“I concluded I could probably get another 50 horsepower out of the engine, maybe get it to 360, 370,” he says. “But I would have had to start over with new blocks, new pistons, new cams and avoiding doing everything I had learned the hard way not to do. So, instead, I decided to bet on the M104 dual-overhead-cam Mercedes engine that had powered millions of [modern] sedans and was basically one-half of their V-12.”

Sirna hedged his bet by entrusting engine development to Roush Competition Engines. In 2016, with the straight-6 making 420 horsepower at 9600 rpm on gasoline, he pulverized the old record and notched a new mark at 190.759mph. Unfortunately, he went home with two valuable motors sporting expensive holes in the block. So why, I asked him, didn’t he just declare victory and call it a day?

“The mission was not accomplished,” he told me. “I didn’t have my red hat.”

A few years back, I had my own disheartening salt flats experience. Granted, I wasn’t as fully invested as Sirna, since I was driving a car that somebody else had built, prepped and paid for. But I spent several days at Bonneville in 2014 before the engine broke in the middle of a qualifying run. I returned two years later – the salt wasn’t in drivable condition in 2015 – and got the car up to 205.122mph only to discover that the engine had melted down due to a crappy aftermarket water pump. Sigh.

Then, adding insult to injury, we discovered after we towed the dead car back to impound that somebody had raised the class record even as we were preparing for our initial run. So I wouldn’t have gotten a record – and earned a red hat – even if I’d been able to “back up” my time with a second run. Double sigh. As I was moping around the pits, a longtime Bonneville veteran told me, “If you own a record out here, you earned it.” Ain’t that the truth.

To chase a red hat, Sirna bought a ’29 roadster with a proven track record and retrofitted it with the M104 out of his Gullwing. Power wasn’t an issue. Straight-line stability was. Roadsters are inherently unstable “Any time the car bounced, it wanted to go backward,” Sirna says.

In 2019, the salt was in such lousy shape that he didn’t make any serious passes. In 2020, he lost control at 184mph, spinning around six times like a top. This year, after visiting a wind tunnel and modifying the car so that the centre of gravity was well ahead of the centre of pressure, he knocked out four runs without any drama and collected two records along with his spiffy red headgear.

Sirna figures he can collect six additional records with the 3.0-litre engine, and he’s going after a dozen more with a 2.0-litre V8 featuring a custom block made in New Zealand by a company called Prototipo mated to a pair of BMW S1000RR motorcycle heads. And after that?

“Absolutely,” he says immediately, as if the answer were obvious. “We don’t know how yet. But we’re going to go after it. I may need a different car to go that fast.”

Sounds crazy to me. But salt fever will do that to a man – makes him think that earning a blue baseball cap is worth the outlay of insane amounts of time and money. Then again, I wonder what colour hat you get for joining the 400 Miles Per Hour club? 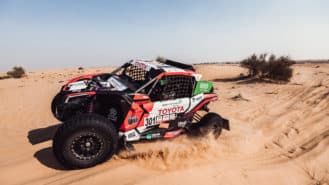