The Bloodhound SSC project isn’t the only current land speed record team with 1,000mph in its sights, Australian Rosco McGlashan’s Aussie Invader 5R is racing the Brits to the milestone.

But his project has stalled – the R&D tax refund McGlashan received for his independent effort has been withdrawn and repayment demanded. The West Australian reports the car will have to be sold.

Such is the spirit of land speed records, the Bloodhound SSC project has offered its counterparts its support by means of a letter from Richard Noble, published today on Facebook: 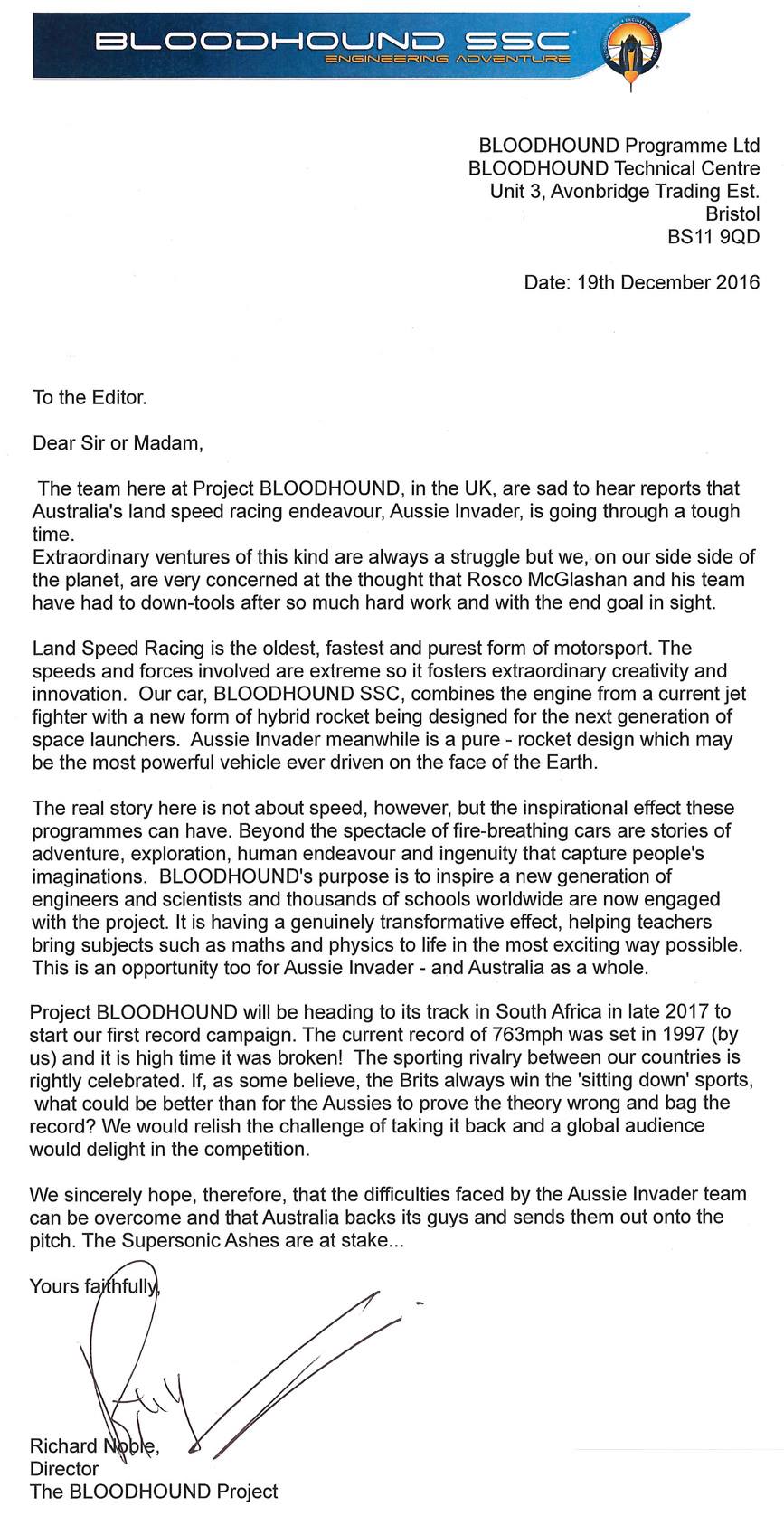 The team here at Project BLOODHOUND, in the UK, are sad to hear reports that Australia’s land speed racing endeavour, Aussie Invader, is going through a tough time.

Extraordinary ventures of this kind are always a struggle but we, on our side side of the planet, are very concerned at the thought that Rosco McGlashan and his team have had to down-tools after so much hard work and with the end goal in sight.

Land Speed Racing is the oldest, fastest and purest form of motorsport. The speeds and forces involved are extreme so it fosters extraordinary creativity and innovation. Our car, BLOODHOUND SSC, combines the engine from a current jet fighter with a new form of hybrid rocket being designed for the next generation of space launchers. Aussie Invader meanwhile is a pure – rocket design which may be the most powerful vehicle ever driven on the face of the Earth.

The real story here is not about speed, however, but the inspirational effect these programmes can have. Beyond the spectacle of fire-breathing cars are stories of adventure, exploration, human endeavour and ingenuity that capture people’s imaginations. BLOODHOUND’s purpose is to inspire a new generation of engineers and scientists and thousands of schools worldwide are now engaged with the project. It is having a genuinely transformative effect, helping teachers bring subjects such as maths and physics to life in the most exciting way possible. This is an opportunity too for Aussie Invader – and Australia as a whole.

Project BLOODHOUND will be heading to its track in South Africa in late 2017 to start our first record campaign. The current record of 763mph was set in 1997 (by us) and it is high time it was broken! The sporting rivalry between our countries is rightly celebrated. If, as some believe, the Brits always win the ‘sitting down’ sports, what could be better than for the Aussies to prove the theory wrong and bag the record? We would relish the challenge of taking it back and a global audience would delight in the competition.

We sincerely hope, therefore, that the difficulties faced by the Aussie Invader team can be overcome and that Australia backs its guys and sends them out onto the pitch. The Supersonic Ashes are at stake …