The Porsche 911 is the ultimate sports car for many, but if it’s not quite ultimate enough for you, we know people who can help 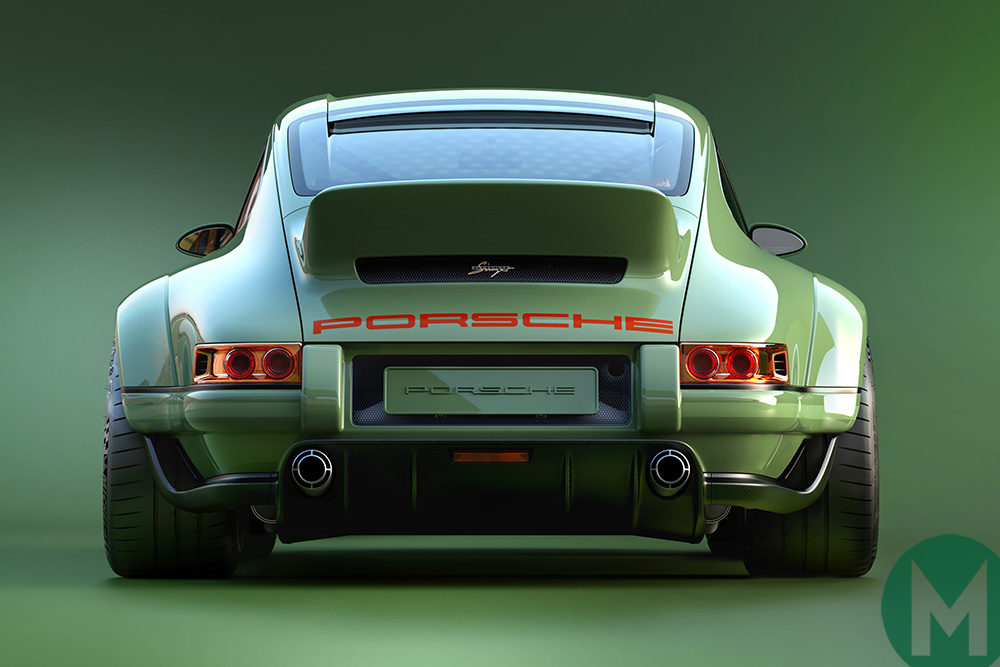 The first car restored by Singer at Grove

Imagine being ‘reimagined’ or ‘reborn’. The younger you, with all that promise and energy, but with some of the rougher edges knocked off, and all the benefits of decades of experience. An older, wiser approach but with a body that still maintains those flawless sleek lines before time and gravity did their worst. It may be an eternal dream for humans, but for cars it is already a reality.

A reimagined car is a faithful build or rebuild of an original from decades ago, but assembled to today’s exacting tolerances and often with some of the latest technology that makes life more enjoyable or just safer.

Primarily it’s a sector owned by the specialist creators but even the manufacturers have got in on the act. Jaguar Land Rover (JLR), for example, has just announced it will build 150 examples of what it’s calling the 70th Anniversary model of the Land Rover Defender, complete with a 5.0-litre V8 under the bonnet, full Windsor leather in the cabin and a re- engineered price of around £150,000.

JLR already has such programmes running for other vehicles, like the six Jaguar E-Type Lightweights, and the nine XKSS cars, that have collectors swooning over their Amex Centurion cards. Not to be left out, Aston Martin is also building the DB4 GT Continuation, a £1.5m reborn classic Aston that is designed not for a leisurely drive to the country, but for hurtling round the globe’s racetracks, like it’s original.

These are all additional revenue streams for major companies, but for some smaller companies making such vehicles is entirely what they do, what they are for. And for many the vehicle of choice is the Porsche 911. However, not everyone likes the iconic Porsche, with some considering it a symbol of in-your-face wealth and detachment. Writer P.J. O’Rourke famously called it an “ass-engined Nazi slot car”, although he did later recant and admit he owned one, a 1990 Carrera. In Car and Driver, as part of his mea culpa, he gushed that “it cornered like it knew where the apex was while I was having an apoplexy looking for it”. 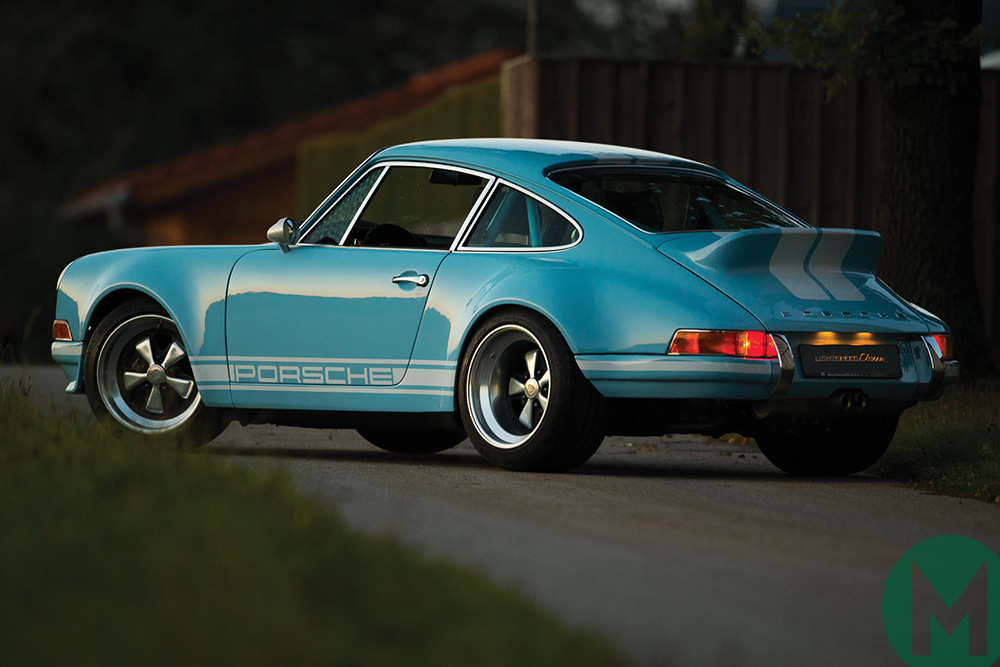 It is that quality, of being a race car that ordinary people can drive, of being a performance car that is incredibly practical as daily transport, that has enamoured it to so many people – in May last year the one-millionth 911 rolled off the production line.

Over seven generations since the original of 1963, the 911 has of course changed. To some that is good, welcome news, to others anathema. Perhaps the critical, seismic moment came when the flat-six engine in the rear gained water-cooling. The change from air-cooling came with the 996 model in 1998, and the result is that water-cooled models like the 996, 997 and 991, now outnumber their air-cooled forebears.

For many, those old air-cooled Porsches represent the pinnacle of sports car perfection, and devotees simply don’t feel the same about later models with liquid-cooling. Heaven knows how they feel about the latest 2.5-litre flat-four engine.

So there has been a steady stream of those older Porsches being repaired and rebuilt. Porsche claims that 70 per cent of all the cars it has made are still driveable today. For the discerning few this has been taken further, so that those older cars are being rebuilt to the sort of exacting tolerances that even Porsche didn’t apply on the production line. With the addition of everything from the latest brakes to discreet sat nav, these ‘reimagined’ Porsche 911s combine the best of the past with the best of the present. And you’ll find companies doing top-grade work everywhere from Europe to North America.

Since Germany produces the Porsche it seems only sensible that one such company is Autoaktiv Motorsport on the outskirts of Munich. The company’s aim is to “bring the old-school Porsche feeling back on the road”. They use exclusively the 964 Series as the donor vehicle, the one made from 1988 to 1993. The result is the Lightspeed Classic, available in a variety of configurations, all of them taking the vehicle back to the bare metal before reinforcing, widening if necessary, and upping the power output. The company uses 3.6-litre or 3.8-litre versions of the flat six with the most powerful RSR version making 335bhp thanks to 997 GT3 internals and a bespoke exhaust system. 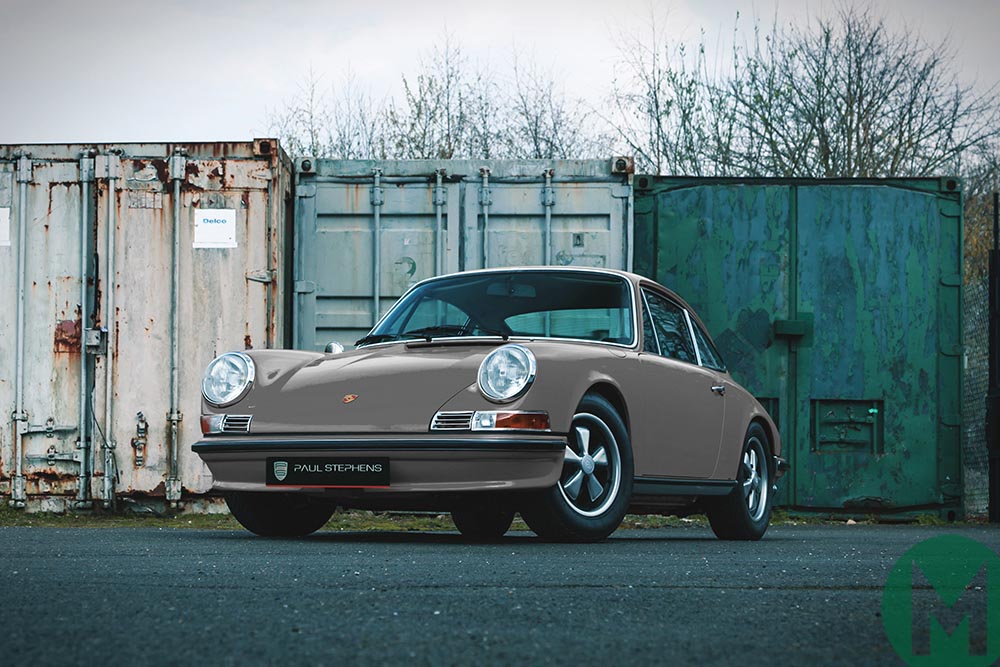 Gunther Werks sounds like a German company but actually it’s based in California, and builds some fabulous, and fabulously expensive, reimagined 993 Porsches, the ones built from 1993. A price tag of around $525,000 (€422,500) may sound extreme but with 5,300 hours of labour to make one car, perhaps it’s not so unreasonable.

Also in California is Workshop 5001, operating out of an unglamorous industrial part of Los Angeles. Inside it’s a pristine and glorious blend of old and new, and that’s just the timber-roofed building. But while it’s making its own mark on the marque, it’s no coincidence that the company is run by Marlon Goldberg. He used to be operations director at Singer, and that’s the name you always end up with in the world of reimagined 911s.

When we spoke to Paul Stephens, a Porsche specialist in the UK for 25 years and owner of the top- end PS Autoart, a facility he launched in 2005, his first question was whether we were including Singer. This isn’t because he is scared of the competition, more that the two brands are aimed at slightly different people. At this level everything is personal, bespoke, and PS Autoart appeals to, in Stephens’ words, “someone who already owns a pair of hand-made English brogues. Our cars are for people who appreciate quality and subtlety”.

PS Autoart’s Porsches, using the 911 platform, are at the top end, with prices reaching the £300,000 to £400,000 bracket. Yet Stephens is keen to stress that the aim is understated quality. Mechanically everything is enhanced but made to look original. Every component that was plastic is machined from anodised aluminium, and every surface that may have been vinyl is re-trimmed in leather. You even have your own personal steering wheel created for you. The completed car is backed by a solid three-year, 60,000-mile warranty. “Singer, perhaps, is more flamboyant,” he says.

Well, as the saying goes, it would be wouldn’t it? The company was founded by Rob Dickinson, who was in a British alternative rock band called Catherine Wheel. (If you think you recognise the Dickinson name, his cousin is Iron Maiden’s Bruce Dickinson.) In a nod to Spinal Tap, the rev counter goes to 11.

An Englishman restoring iconic German cars from a top-notch facility in Los Angeles may seem a bit random, but Dickinson has a degree in product design and a real love of old-school Porsches. And the area has been hot-rod central for decades, so all the skills that you’d need are on your doorstep – plus it’s the epicentre of ‘R Gruppe’, a hardcore club of 911 superfans, many of them working in the car industry.

All of which is helpful, but that’s not really the thing. The thing is that Singer makes what many believe to be the most perfect, beautiful reimagined Porsche 911s on the planet – assuming you aren’t after something as understated as a pair of hand-made English brogues. Even so, a Porsche restored by Singer doesn’t always make a huge fuss about what has gone into the finished car.

The bodies have sometimes been enhanced using Dickinson’s own design, with, for example, slightly more flowing, exaggerated curves to the bulging rear wheel arches – Evo magazine called the lines “borderline pornographic” – which admittedly tells you as much about the magazine as the car. 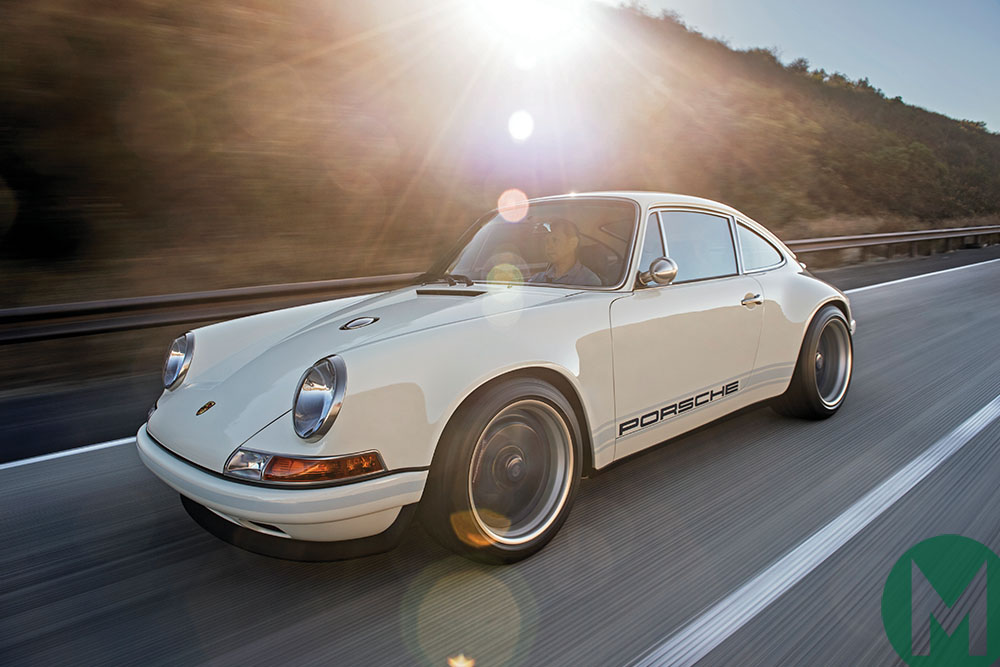 At this point it would be normal to talk about how the cars are stripped back to the bare monocoque and then to discuss the fanatical attention to detail that goes into every component. The way all the 964 flat-six engines are rebuilt to 3.9-litres and 380bhp, and then mounted in a quilted leather engine bay. Or how the horn button in the centre of the Momo Prototipo steering wheel is replaced by one machined from billet, hand polished and crowned with an embossed leather Porsche crest. But, to be honest, you’d start glazing over at the truly obsessive nature of the work, and get punch-drunk at the superlatives. Even seasoned car journalists end up gushing to such a degree that they know they ought to stop, but can’t.

The finished effect of all that work when on the move is to feel you are in a car that has been made from one piece. There’s an integrity and a sense of quality which are way up the scale from what Porsche could achieve on a production line. Handling is sublime, as intuitive and responsive as the steering, while the free-revving wail of the liberated flat six is as addictive as the popping and vicious banging on the overrun.

The cabin you sit in is built to a standard you can’t imagine an actual manufacturer ever being able to match. The leather seats – sorry, getting carried away again. You get the picture. Prices seem justified, if variable – you could spend $300,000 (€240,000) or you could stretch to around $1m (€800,000). A Porsche restored by Singer is pretty much the pinnacle. Or is it? In fact Singer in Los Angeles has upped the game still further by, last year, opening Singer at Grove.

This is a facility crammed with top engineers, test drivers and other experts and it’s based not in California, USA, but in Oxfordshire, England. It’s a tie- up with Williams Advanced Engineering, a name perhaps more familiar from Formula 1. Singer at Grove will be restoring 964 Porsches to an even more extreme level – the first vehicle the partnership delivered made nearly 500bhp.

Singer is the Porsche 911 with the emphasis very much on those last two digits. Now we just have to work out how we can reimagine ourselves. 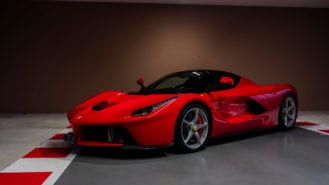 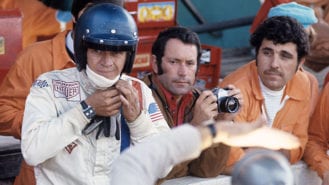 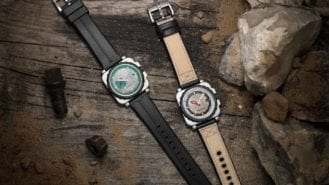 REC: watches that have already had a life of adventure