Assen is unique, which is why some bikes excelled at the 2019 MotoGP Dutch TT, while others floundered 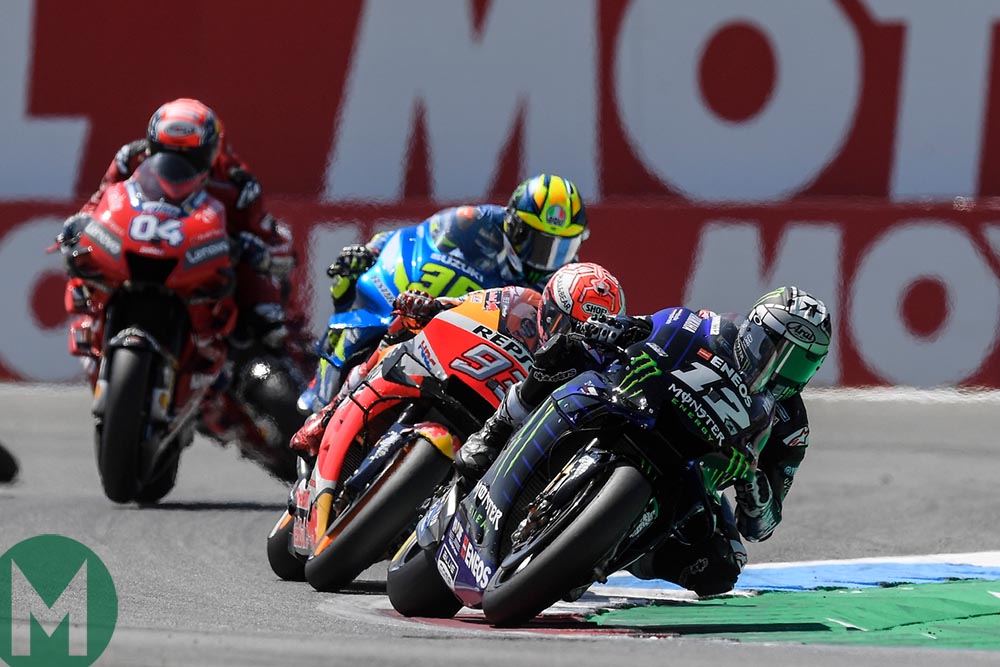 The cries of joy in the factory Yamaha garage on Sunday afternoon were just about drowned out by the groans of despair in the Suzuki garage.

Assen is a very unusual MotoGP circuit. It’s the kind of place where the inline fours can shine, a bit like Phillip Island.

Maverick Viñales won at Phillip Island last October and again at Assen, with a little help from Suzuki. If Álex Rins hadn’t locked the front and crashed while trying to break away in the early stages it might’ve been Suzuki’s day, just as it might’ve been Suzuki’s day last October at Phillip Island, until Andrea Iannone made a few mistakes and lost his chance to attack Viñales.

What riders need at Assen and Phillip Island is a combination of high-speed stability and good direction-changing, to maintain control through the super-fast kinks, while also flicking from side to side with ease at over 150mph. It doesn’t take a genius to work out that these performance factors shouldn’t really go together, because if a bike is super-stable, like a super-tanker, it usually likes to keep going straight.

“The Suzuki does one kilometre more around the lap, but they are faster because they don’t have to do square off corners like us.

Assen and Phillip Island aren’t in-and-out layouts like most MotoGP circuits. That’s why Ducati’s riders were in so much trouble last weekend, because the Desmosedici is a point-and-squirt motorcycle, built to unleash its mighty horsepower around more conventional MotoGP venues.

Danilo Petrucci spent some of the race with Suzuki’s Joan Mir and was able to make a direction comparison between his GP19 and the Spanish rookie’s GSX-RR, which can take gloriously sweeping lines, one of the keys to a fast lap at Assen.

“The problem for us is that the Suzuki does one kilometre more around the lap, but they are faster because they don’t have to do square off corners like us,” said Petrucci, who has that rare knack of delivering technical explanations with humour. “The Suzuki is very smooth in the corners and they can use all the track, which is impossible for us. If we enter very wide like them and try to find the apex at the last moment we miss the apex.

“At tracks like this it’s difficult for us to fight with guys who are very fast through the corners. Here there are no real straights and no real braking areas. When we can brake hard and go immediately to the inside of the corner then it’s okay for us, but then we also need a lot of support from the rear tyre for traction. 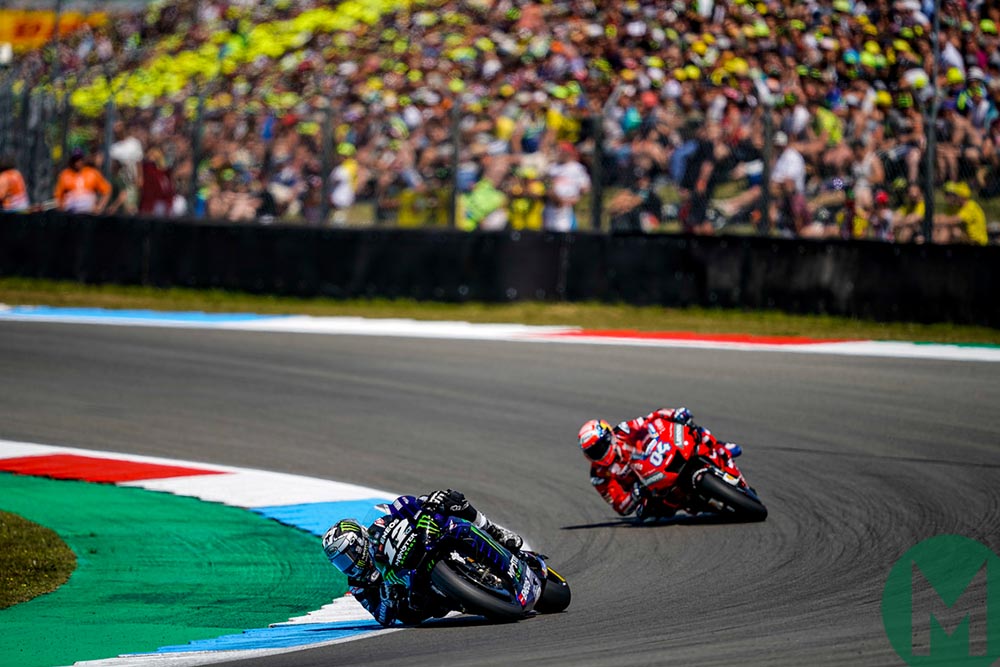 “On Saturday morning I was very fast and the bike was one of the best I’ve ridden in my life, but once the heat came up the bike became very, very difficult to ride and the last ten laps of the race were a nightmare.”

Fellow GP19 riders Andrea Dovizioso and Jack Miller were just as downbeat. “Here you have many long corners where you have to use corner speed and that’s not our strong point,” Dovizioso explained. “I also expect Yamaha and Suzuki to be very strong in Germany next week, because there are many really long corners there.”

All factories modify their set-up at Assen more than just about anywhere else. They go stiffer with the rear shock, so the g-forces don’t make the bike sit down through the high-speed changes of direction, and they go softer with the front forks, so the bike turns better with the front tyre.

“You go a bit softer at the front here because you don’t use a lot of brake at Assen, so you want to get some load transfer to the front without grabbing the brakes,” explained Miller, who like all Ducati riders had to work very hard to make his bike behave. “Assen is bumpier this year and it was a bit scary with the standard set-up, so we had to change the bike to absorb the bumps and the shaking. If you hit a bump at 250kph the bike would start shaking and you couldn’t stop it.”

Which brings us to rookie rocket Fabio Quartararo and his dancing YZR-M1, which nearly had him off a few times as he accelerated down Assen’s short back straight. What were the tank-slappers all about?

Quartararo’s recent arm-pump operation may also have played a part in his M1’s instability. When riders return from arm surgery they unsurprisingly want to hang on very tight, which can make the bike more unstable.

Despite all those scares Quartararo made it to the podium for the second consecutive race, crossing the line almost five seconds ahead of Dovizioso’s Ducati.

You’d think it would be straightforward to explain why inline fours seem to have an advantage over the V4s at Assen. But as usual it’s a combination of factors.

An inline-four engine should be lighter and more compact than a V4 engine. That’s a huge gift for chassis designers, who have the chance to put the engine in the optimum position to create the perfectly balanced motorcycle that will steer and handle beautifully. And they have less difficulty putting the fuel and exhausts in a good place.

On the other hand, the inline four has a wider crankshaft, which means riders have to overcome more crankshaft inertia as they turn into corners. Crankshaft inertia is, therefore, a very exact science for inline-four engine designers: make the crankshaft slightly too heavy and the bike will be difficult to manage on the brakes and won’t want to steer into corners. That’s why Suzuki had a disastrous 2017, because its engineers made the crank a few hundred grams too heavy in the search for better corner-exit traction. 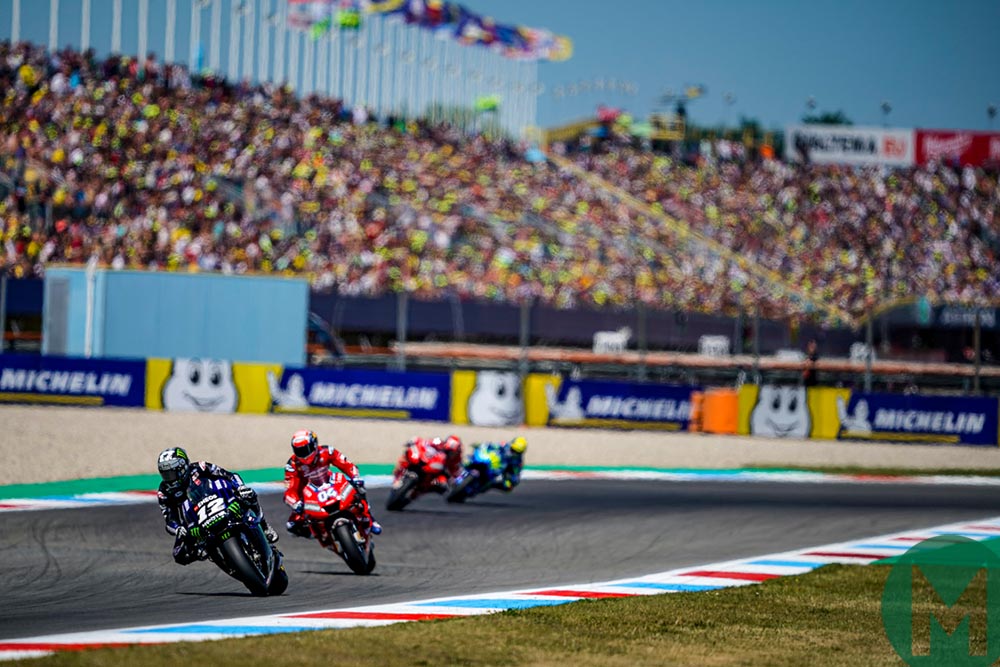 Miller got particularly depressed at Assen whenever he found himself jousting with a Suzuki or Yamaha.

“I’m throwing elbows, legs, feet, the whole lot at it,” said the Aussie. “And they’re able to sit in the centre of the seat and just turn the handlebars and the thing changes direction for them.”

Miller was probably exaggerating the advantage enjoyed by his inline-four rivals, but you get the point.

There is another feature of the Assen layout that helps the Suzuki and Yamaha against the Ducati and Honda. The straights aren’t long enough to allow the Desmosedici and RC213V to exploit their horsepower advantages. V4 engines have a more rugged engine structure than inline fours, so engineers can squeeze more power out of them, but that’s not much use at Assen, or at Phillip Island, where the track’s long main straight is heavily outnumbered by its numerous long corners.

The Spaniard doesn’t really fit into any of these basic technical explanations because he’s the kind of rider who could conjure a lap time out of a unicycle. In that sense he’s reminiscent of the “old dogs” (Valentino Rossi’s phrase) of the late 500cc era – Kevin Schwantz, Wayne Rainey and Mick Doohan – who rarely raced a bike that was 100 percent right, so they gritted their teeth and bent their motorcycles to their will.

Márquez’s second place finish at Assen (he’s yet to finish lower than second this year) was cause for more gloom in Dovizioso’s garage, from whence all hope of winning the title has evaporated.

“Again Marc stayed second – the speed he had was really good,” said Dovizioso.

There’s no doubt that the more compact RC213V is less of a handful than the Desmosedici around Assen, but Márquez did finish the race 18 seconds ahead of the next Honda.

It’s impossible to build a motorcycle that excels at all 19 tracks, so you must build a bike that delivers the best average performance around those 19 different layouts

As usual, it was a case of talent, intelligence and teamwork. Márquez ran with Viñales for the first two thirds of the race, taking a lot of risks to stay with the M1. He didn’t need to, of course, because he already had a 37-point lead over Dovizioso. But while most racers would use that points advantage as an excuse to slip into cruise mode, Márquez used it as an excuse to take a few more risks. The two Spaniards don’t like each other, so there was more at stake than mere championship points.

Márquez had also chosen tyres cleverly – to suit his championship strategy, not his race strategy. While Viñales chose a hard rear Michelin to give him the best race-long performance, Márquez went with the soft.

“I chose the soft because my strategy was to go with the Yamahas,” he said. “I never had it in my mind to lead the race because when you lead you use more tyre. My target was to be with the Yamaha riders until lap 15 [of 26], then maybe suffer the last laps and just survive. For me, the risk with the hard tyre was to have a slower pace and end up with Dovizioso.”

You may also have noticed that Márquez is crashing less these days. The five-times MotoGP champion has fallen six times so far this season, compared to ten tumbles by the time he left Assen last year and 13 the year before.

He didn’t hit the ground once last weekend, again because he had thought about it. “You have to be careful here because the speed is very, very high and also we have two races in a row – this is another point,” he added.

“This year I crash less, which is important. Honda has been working to give me a more balanced bike since 2015, when we had a bike that was very, very strong in some tracks and struggled a lot in others. It’s no use being very strong at some tracks and very weak at others. Now we attack when our bike is working well and when our bike struggles we suffer, but in a good way, like today.”

This, of course, is the ultimate target of all manufacturers. It’s impossible to build a motorcycle that excels at all 19 race tracks, so you must build a bike that delivers the best average performance around those 19 different layouts.

It’s a never-ending quest, which is what makes the job endlessly fascinating.

As Öhlins engineer Thomas Alatalo says, “The full equation of the performance of a motorcycle is something you’re never likely to figure out – there are too many variables”.

It’s probably easier to figure out what will happen next weekend at Sachsenring, where Márquez last got beaten in 2009, when he crashed out on the last lap of the 125cc race while fighting for the podium.