Suzuki took the lead in the four-stroke MotoGP world championship for the first time at Aragon on Sunday. The last time the company led a premier-class title chase was way back in grand prix racing’s two-stroke era, when Kenny Roberts Jr won the penultimate 500cc title in 2000, riding an RGV500.

Suzuki has long had a strange relationship with GP racing, dipping in and out, unlike Honda and Yamaha, and failing to put more than two bikes on the grid since the days of its RG500 two-stroke in the early 1980s. Its presence in the championship has often been half-hearted, which is why Álex Rins’ victory and Joan Mir’s third place was only the company’s seventh double podium since the early 1980s.

The man largely responsible for Suzuki’s 2000 success was Australian Warren Willing, who became a self-taught engineer after a massive crash at the 1979 North West 200 ended his racing career. Willing was one of the men who worked magic at Marlboro Team Roberts Yamaha during the 1980s and 1990s. In 1999 he joined Suzuki at the behest of ‘King’ Kenny Roberts, so he could give KRJR a winning bike.

Willing poured all his Yamaha YZR500 knowhow into KRJR’s RGV, battling a race department thousands of miles away that thought it knew better. In 2001 he travelled to Hamamatsu with Roberts and team manager Garry Taylor to discuss development of Suzuki’s first four-stroke GP bike, the GSV-R V4.

“I asked Suzuki a couple of questions about four-stroke development: ‘Are you doing this or that?’,” said Willing, who lost his battle with cancer in 2015. “They said, ‘No, it’s not necessary’. So I said, ‘Well, Honda are doing this and that’. ‘No, no!’ they said. ‘Our four-stroke technology is more advanced than Honda’s’. I said, ‘Really, how come?’ And they said, ‘Because our GSX-R1000 streetbike outsells Honda’s CBR1000’. So I turned to Garry and said, ‘Sorry, I’m out of here’.”

Since the advent of MotoGP Suzuki has had a mostly horrible time. Its 1000cc and 800cc V4s never worried Ducati, Honda or Yamaha, taking just one race win in 11 seasons, at rainy Le Mans in 2007, with Chris Vermeulen onboard. At the end of 2010 the factory shrunk its team to a one-rider operation and then to zero riders at the end of 2011. 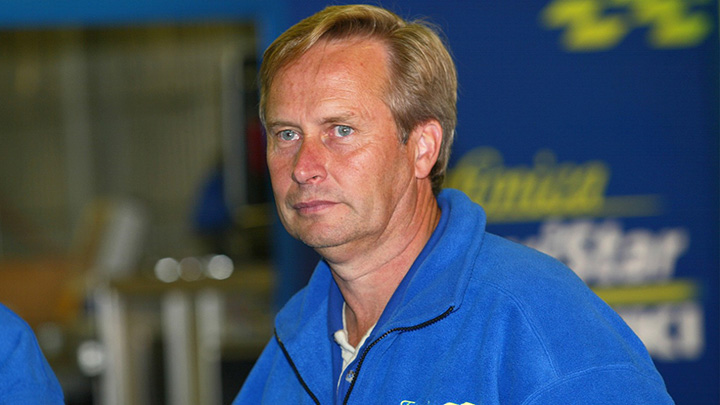 Warren Willing: "One of the last great tuners"

Last year MotoGP suffered its saddest loss since the death of Marco Simoncelli in 2011. Talented racer and genius engineer Warren Willing passed away on September 5 following a long…

Thus when Suzuki returned in 2015 with its all-new GSX-RR inline-four the paddock wasn’t sure how serious were the company’s intentions.

The last couple of years have proved that Suzuki’s current race department knows how to build a MotoGP bike and how to go racing.

Suzuki contests MotoGP with one of the smallest budgets; probably only Aprilia spends less. If money equals horsepower that might explain why Suzuki had the slowest bike at Aragon on Sunday – at 211.5mph/340.4kmh, compared to Ducati’s desmo rocket-ship at 216.9mph/349kmh, with the other bikes between.

How could Rins win the race when his Suzuki lost 5mph on the main straight each lap? Because he had a speed advantage through the track’s faster corners.

The GSX-RR’s strength has always been its neutral balance, so it is rider-friendly and tyre-friendly. Both these factors are important but nothing is more important in MotoGP right now than a motorcycle’s ability to simultaneously generate grip from the tyres and look after the tyres. 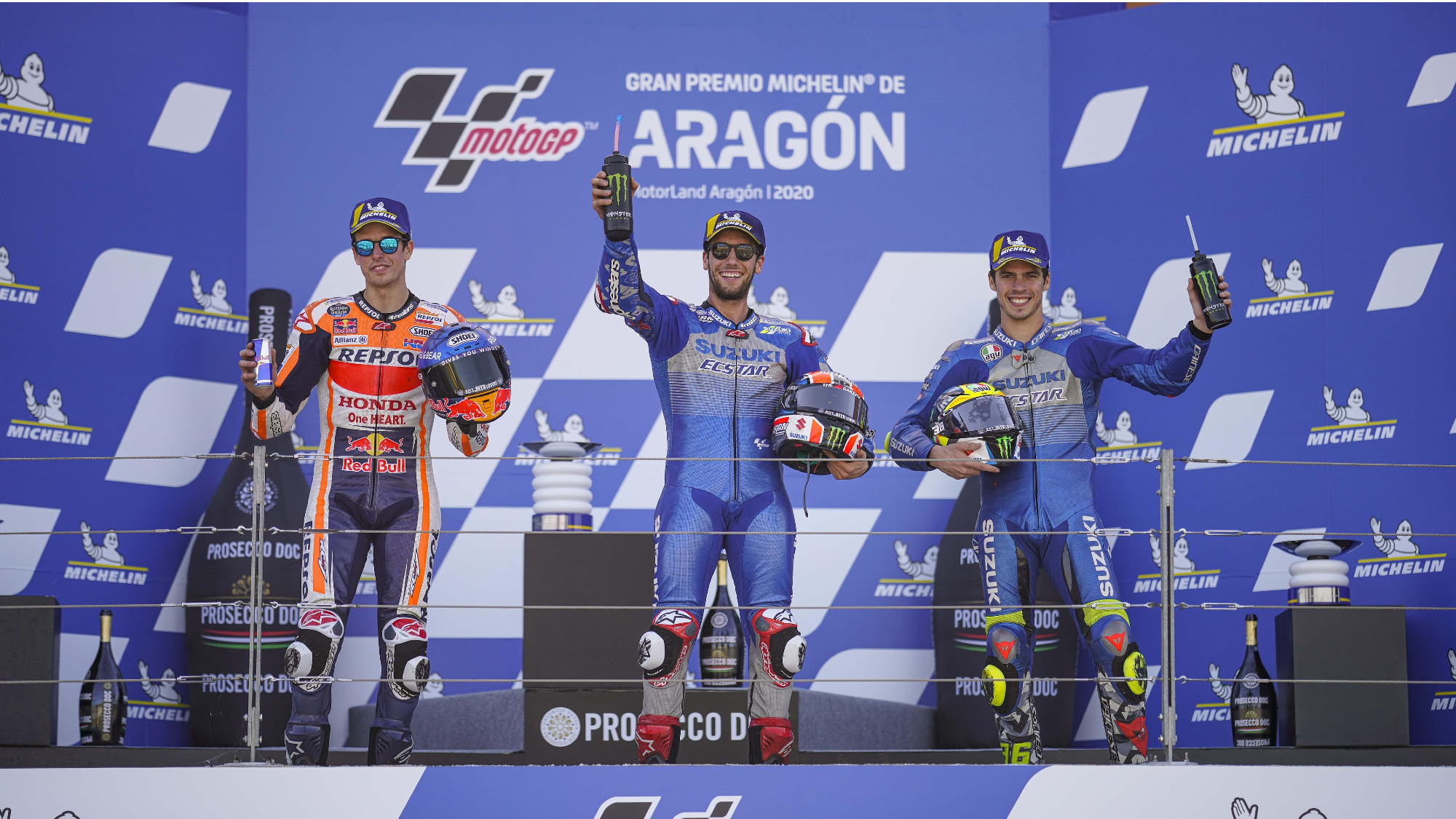 Michelin’s MotoGP slicks are very sensitive to temperature, so you need a motorcycle that can ride that fine line between the two. This is one reason Joan Mir leads the championship, because the GSX-RR handles the differing conditions from one track to another better than the other bikes. This year that capability is more important than ever, with many of the races staged at unusual times of the year, which helps explain the crazily topsy-turvy nature of the championship.

Mir has yet to win a race, but he has scored five podiums from the first ten races, while no one else has scored more than three. That dramatic inconsistency is largely down to the sensitivity of the tyres and the unusual track temperatures.

“We are showing serious consistency and the most difficult part of this championship is to always be on the podium,” said Mir. “It’s easier when everything goes your way and you have the pace to win, but the most important thing is that when you struggle you can still get a good result. This is the key.”

Meanwhile Rins’ Aragon victory, Suzuki’s first of 2020, indicated that he would also be in the thick of the title fight if he hadn’t crashed out at Jerez, mangling his right shoulder, after Jack Miller fell in front of him.

No surprise that riders of some of Suzuki’s title-rival machines – Yamaha’s YZR-M1 and Ducati’s Desmosedici – struggled to set their machines inside that narrow Michelin window at Aragon. Yamaha’s Fabio Quartararo had a disaster with his front tyre, while Ducati’s Miller struggled with cold tears to his rear tyre.

Miller was amazed by the Suzuki.

“At the last corner Joan was able to get in underneath me, not even run it wide, still square it up and manage to have the grip out of the corner,” said the Australian.

“The Suzuki is in really good shape,” said Morbidelli, who finished sixth. “When you see them in their mode so early in the race you have to be scared. I was expecting them, but not so early. Rins overtook me on lap three and I was impressed by that. What you see when you are behind them is that they have unbelievable grip and unbelievable drive out of the corners and that they are able to ride on a different level compared to you.

“Unfortunately the hotter race conditions changed the balance and the level of the race. I thought it would be a race between me, Maverick [Viñales, who finished fourth] and Fabio [who finished 18th]. Instead it was a race between the Suzukis and the Hondas.

“We know the Yamaha’s nature is to make smooth, long, wide lines, but when the grip is lower we struggle and make long, wide and not fast lines.”

“The front tyre pressure was out of control and we don’t know why,” said the Frenchman, who lost the 2020 championship lead for the first time. “The choice of tyre was correct but from lap three the pressure was higher than normal and by mid-race it was totally out of control, so I couldn’t brake, couldn’t turn and couldn’t lean the bike.” 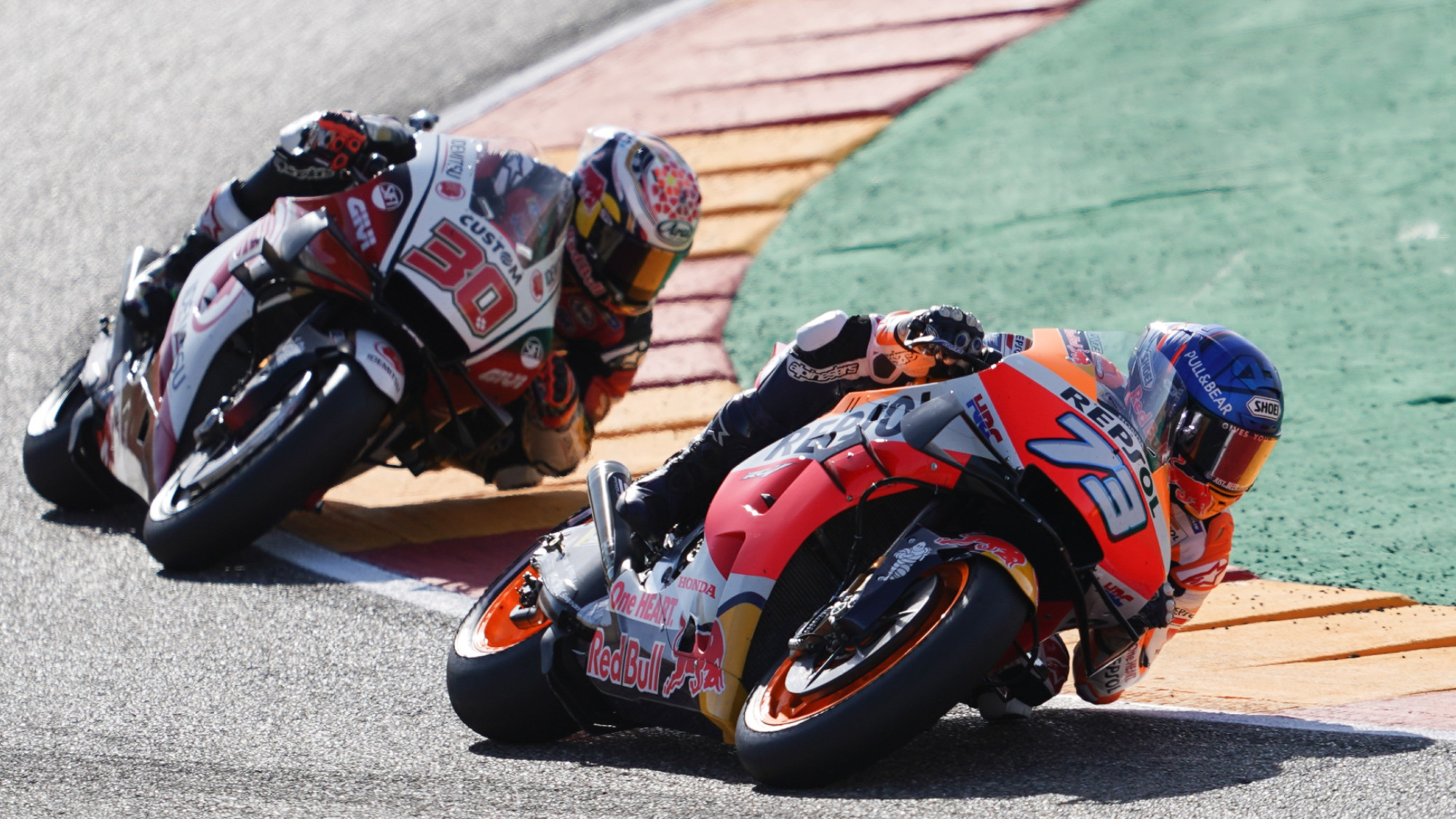 Quartararo knew his front tyre was over-pressurised because riders have tyre-pressure gauges on their dash panels. When pressure increases too much the tyre’s profile changes, reducing the rubber’s ability to grip the asphalt and shrinking the contact patch. Michelin stated that Quartararo’s crew had chosen a too high pressure.

Quartararo now stands second overall, six points behind Mir, six ahead of Viñales and nine in front of Andrea Dovizioso, who finished a lowly seventh on Sunday.

The reigning Moto2 world champion had given some warning on Saturday, when he was second fastest in FP4, and charged through from the third row to slot into third place shortly after half distance, then pass Mir and go after Rins. His previous best dry result was seventh at last month’s Emilia Romagna GP.

After the race his older brother Marc – winner of the last four MotoGP races at Aragon – tweeted from their home in Cervera, “I am the brother of Álex Márquez!”.

Many people questioned the promotion of the younger Márquez to the Repsol Honda team, wondering how he would cope with the factory’s fast-but-demanding RC213V. True to form, Márquez has worked quietly, steadily and intelligently, not raising the hairs on the back of your neck like his big brother. On Sunday evening he had an interesting take on the RC213V.

“For me this is the reason the bike is so demanding, because you need to be always on the limit. If you try to relax a bit you lose one second, whereas maybe with another bike you lose two tenths. This is why it’s so difficult and demanding for the rider, but now I’m starting to enjoy the bike and feel it more in my hands. For that reason everything is coming in a better way and I’m starting to understand the bike better, especially the front end.

“My target at the moment isn’t to be on the podium every weekend, because that’s not our real potential. Our potential is a rookie’s potential – to be regularly in the top eight, not up and down – to build our confidence.”

All weekend Ducati was baffled by the Desmosedici’s inability to get heat into its tyres at Aragon. Low track temperatures were part of the problem, of course.

“It was so cold in the first three practice sessions that we couldn’t start our work for the race until FP4,” said Dovizioso. “I said before Le Mans that Mir is the strongest this year because he’s more consistent. Yes, Quartararo has won three races, but the Suzuki is there at the end of every race and this is really important if you want to fight for the championship. It will be hard to fight with them, but anything can happen. I survived today but we have to do something more for the championship.”

Dovizioso was angry after qualifying 13th and disappointed after struggling in the race, but thanks to Quartararo’s woes he ended the weekend three points closer to the championship lead than he had started it. That’s MotoGP 2020 for you.