Valentino Rossi probably doesn’t want to know this – although he probably already knows it in his gut – but 2020 was his worst season since he joined the grand prix circus in 1996. By a long way.

His 25th year in the world championships was even poorer than his two barren seasons at Ducati and his rookie 125cc grand prix campaign, when he was 16-years-old.

Everything that could go wrong for the nine-times world champion in 2020 did go wrong.

Yes, Rossi is 41-years old, almost twice the age of the 2020 MotoGP champion, so he’s not as fast as he used to be (of which he’s fully aware), but he was laid lower than ever by a below-par motorcycle, broken engines, crashes and finally Covid-19.

Rossi’s fanbase and mainstream appeal goes way beyond motorcycling, which makes him worth good money and good bikes.

Rossi’s average points score per race – from the maximum 25 points – was just 4.7. Compare that to his second lowest-scoring campaign, his 1996 season, during which he averaged 7.4 points per race.

Even if we discount the two races he missed while at home with Covid, his average score stands at 5.5 points per race. Compare that to his years of pomp – the strongest seasons were 2002, 2003 and 2005 – when he raked in an average around 22 points each weekend.

The only bright point of the year was his third-place finish in July’s Andalusian GP. However, one podium doesn’t make a summer.

It’s a sad situation which will have many fans baying for Rossi to retire and let someone younger ride his Yamaha YZR-M1s. But, believe it or not, he still loves racing and the challenge of racing, even when that challenge is digging himself out of a hole. 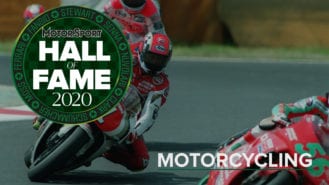 On Sunday at Portimao he finished 12th, a miserable result, although the other riders using the same-spec M1s – Maverick Viñales and Fabio Quartararo – only managed 11th and 14th. And yet Rossi had a blast during the race, charging around the Portimao rollercoaster in a pack of up to eight riders, all of them ducking and diving for position throughout the 25 laps.

“I had a lot of battles and sincerely I enjoyed the race because it was a great challenge from beginning to end,” he said after his 414th grand prix. “The result isn’t fantastic but it was a better race compared to Valencia, because the difference to the top guys was a lot, lot less.”

Rossi’s previous race at Valencia had been his first finish since the San Marino GP, six races previously. After the first Misano race he crashed out at Misano Two, Barcelona and Le Mans, then he missed both Aragon rounds because he was quarantining at home. That was a long time without any real race mileage, so he was rusty.

Details like that matter when you’re racing rivals who have been riding every weekend, so they’re intimate with their motorcycles and know exactly where the limit is located.

The perennial question – should he make way for younger talent? – is a non-question. While Rossi wants to race and, just as importantly, while factories want to let him race their bikes, then he will continue to race. It really is as simple as that.

This kind of thing has happened before. Double 500cc world champion Barry Sheene enjoyed factory support right to the end of his career in 1984, when he was way past his best. There’s little doubt that Sheene wouldn’t have been given his factory-backed Suzuki RG500 if he hadn’t been Barry Sheene.

Sheene won the 1976 and 1977 500cc world championships and hadn’t won a grand prix since the summer of 1981. During 1984 he scored just one podium, in the rain at Kyalami, South Africa. Very much like Rossi now.

Rossi and Sheene enjoy special status among motorcycle racers because their profiles are different from other racers. Their fanbase and their mainstream appeal goes way beyond the world of motorcycling, which makes them worth good money and good bikes.

At the start of his final grand prix season, Sheene rode his RG500 onto the stage during a primetime BBC TV show. That kind of exposure is priceless for companies trying to sell motorcycles, or anything else, for that matter. That’s just the way it is – money makes the world go around and it makes motorcycle racers go around too.

This kind of status gives a rider a special kind of power. Like Sheene, Rossi is in the lucky position of being in charge of his own destiny; up to a point, of course. So he will decide when he writes the final chapter and when the story ends.

He is already thinking hard about his 26th season of grand prix racing and how he can improve himself.

“I have to work a lot on myself to improve in some areas, like qualifying, which is so important now,” he said on Sunday afternoon.

Rossi has struggled with qualifying ever since MotoGP introduced the quickfire 15-minute qualifying format in 2013. And as the racing gets closer and more competitive, riders are usually out of the hunt unless they qualify on the front two rows. That has been a recurring problem for him during the last eight seasons. 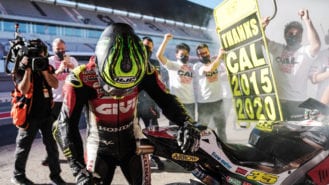 He is also hoping that Yamaha can reverse its diminishing performances of the last few years and build a better factory M1 for 2021.

“We will push Yamaha like always to make a good job and improve in some areas, because in the last years and also this year we were always strong at the start of the season, but then we suffered compared to our competitors, because they are able to fix all the new things and improve, so at the end of season it’s not easy with the Yamaha. Next year will be a hard challenge and we need to arrive ready at the first race.”

Rossi won his last race when he was 38. He will be 42 by the time next season starts and many people are already guessing (and I mean guessing) that he will hang up his lid and leathers at the end of the year. But who knows? If he enjoys 2021 and achieves a few podiums he may want to continue into 2022. More victories are unlikely but certainly not impossible – one day circumstances may just work in his favour.

However, he is unlikely to become the oldest-ever winner in the premier class. Currently the oldest rider to take victory in the 500cc/MotoGP category is Fergus Anderson, who won the 1953 Spanish GP at Montjüic Park at the age of 44.

Anderson was an interesting man. He was one of the first British stars of the so-called Continental Circus in the 1930s, when he helped fund his racing campaigns by writing about his exploits for the British motorcycle press.

Somehow Anderson’s stories got him into trouble with the Nazis, earning him a place in Hitler’s deadly Black Book. This Gestapo publication included its most-wanted list of undesirables who were to be arrested and murdered by the Counter Espionage department as soon as countries were invaded by German forces.

After the war Anderson won the 1953 and 1954 350cc world titles, riding Moto Guzzi’s beautifully laid-out Gambalunghino single. He was killed in 1956 while riding at factory BMW twin at Belgian’s Floreffe street circuit. 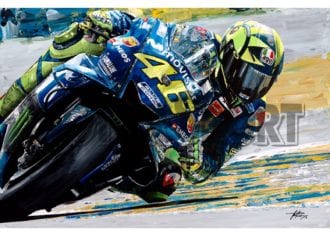