Mugello’s 220mph kink is MotoGP’s fastest, scariest, riskiest corner, but for how much longer? 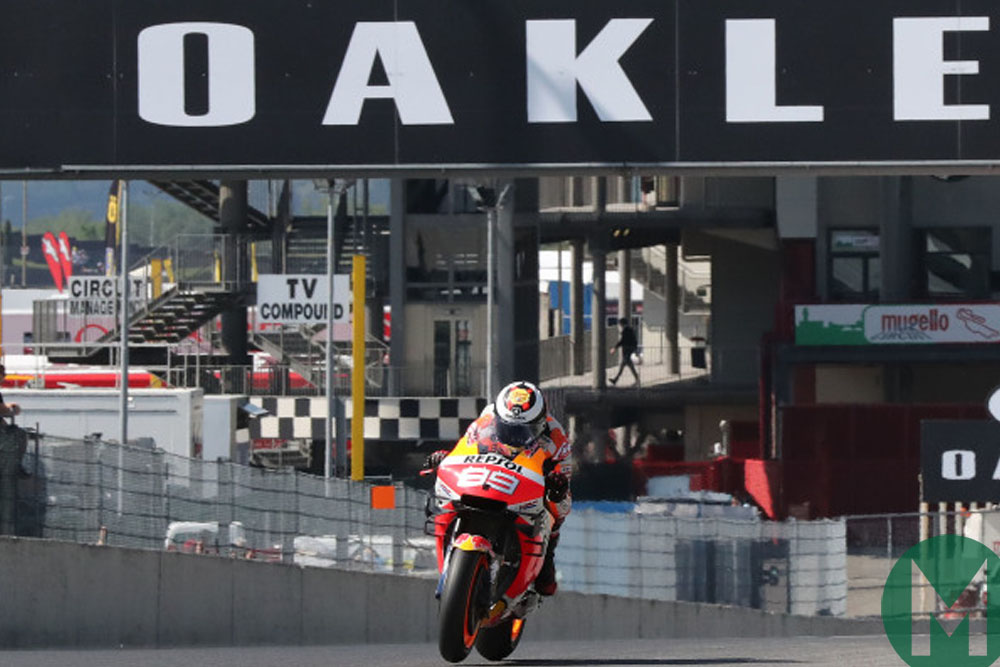 Jorge Lorenzo at around 220mph, front wheel off the ground Photo: Motorsport Images

If you’ve been around racing long enough you mourn many things: most of all you mourn the riders who have lost their lives, but you also mourn the legendary race bikes of old and you mourn the awesome corners that have been lost in the quest for greater safety, so that we have to mourn fewer dead riders.

Here are just two corner sections that are greatly missed. First, the terrifying 180mph/290kmh Armco-lined and cliff-lined left/right flick at the top of the hill at the Salzburgring: front end shaking, back end breaking loose. “To me, riding a bike like that at those speeds is why I liked racing,” remembers Mick Doohan.

And then there was the 150mph/240kmh right/left flick at Assen, called Veenslang. Every racing connoisseur religiously watched the 500s there: the fast guys would get it just right, keeping the engine on the pipe, revs rising suddenly as they flicked the bike onto the side of the tyre, the front end fluttering wildly as the 500’s torque drove the rear tyre into the asphalt.

Both these sections made the hairs stand up on the back of your neck. But they are no longer, so how much longer before Mugello’s sixth-gear kink – the corner with no name – gets a makeover to reduce the risk of something really horrible happening. 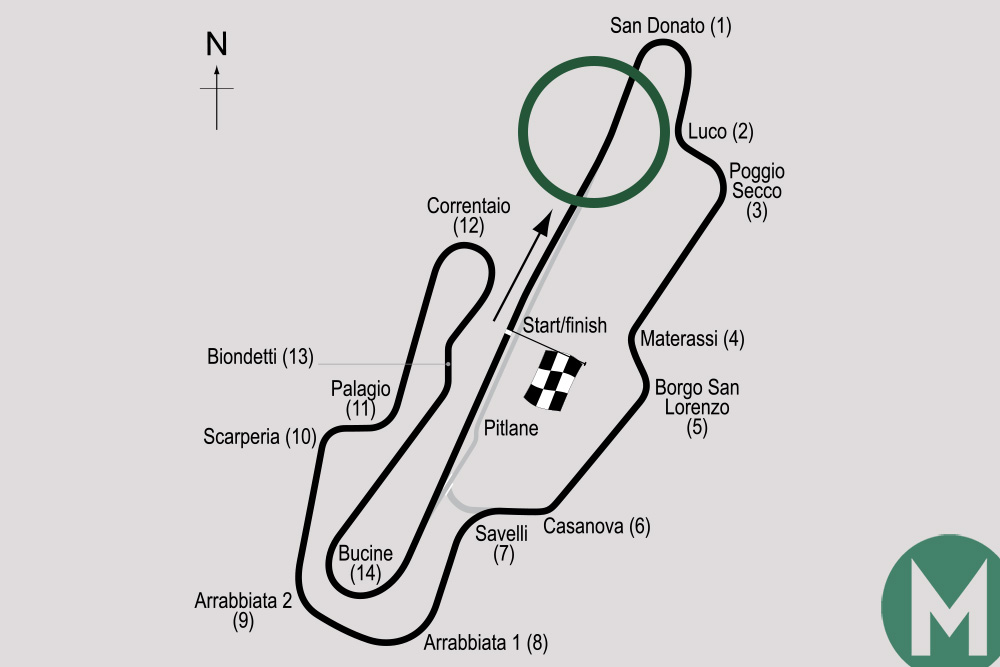 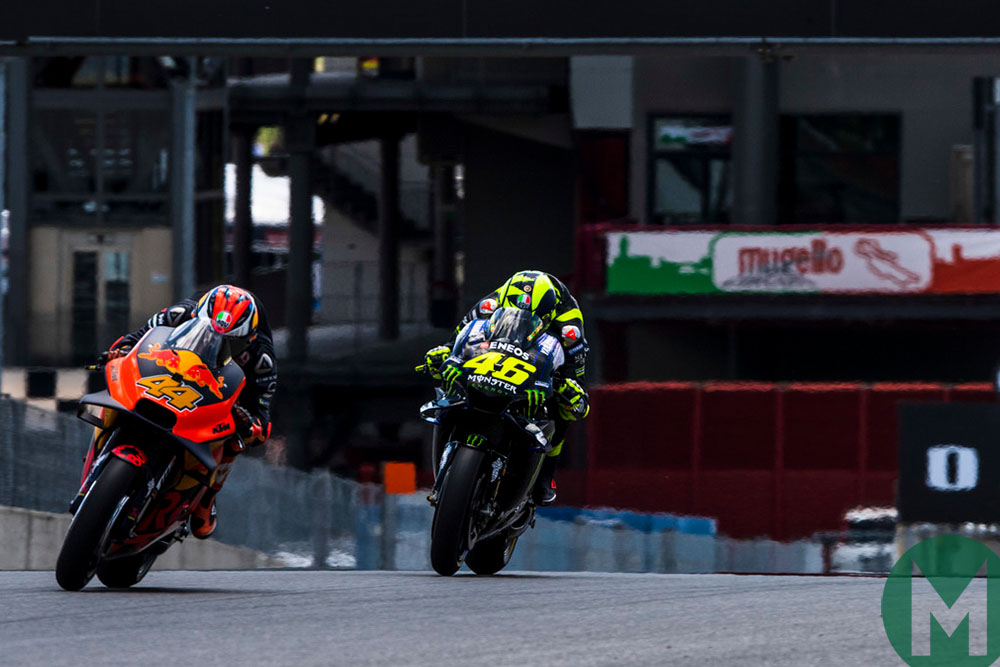 Mugello’s sixth-gear kink is a corner with no name (left). Rossi trails Pol through the kink (right) Photo: Motorsport Images

Currently this hair-raising section of race track is MotoGP’s own little bit of the Isle of Man TT: full gas, 220mph/355kmh, swerve left over a blind brow, both wheels off the ground, then grab the brakes to scrub off 160mph/257kmh for the San Donato right-hander.

Six years ago Marc Márquez crashed there at 191mph/336kmh – he was leaning left over the hump, with minimal load on the tyres, so when he braked the front locked and down he went. Last year Michele Pirro crashed there at 165mph/265kmh after a headshake over the brow pushed his Ducati’s brake pads back into the callipers, so when he hit the brakes they didn’t work, then when he pumped the lever the brakes locked, flinging him over the front of the bike.

Neither rider was seriously hurt, both a miracle and a testimony to modern riding gear. But the next MotoGP rider to crash there might not be so lucky. Hence the talk of somehow reducing the danger of this epic section of MotoGP’s greatest track, its Holy of Holies.

So, how do today’s riders deal with the kink and do they enjoy it?

“Yes and no,” says Jack Miller. “It’s a scary feeling, a fun kind of scary, but you definitely don’t want anything going wrong there. There’s no real technique to it. I just try and grip the bike as hard as I can – I try to pull the handlebars into my chest, to keep the bike as stiff and as straight as possible. I use the kerb in the pitlane, so I can hit the brow straight. That way when you land you can more or less jump straight on the brakes and you haven’t got any lean angle.”

Aleix Espargaró changes his position to help keep the bike under control. “It’s one of the most difficult parts of the championship because you are going super, super fast and the shaking of the front wheel is huge. The most important thing is to make the perfect line. I also try to put a bit more load on the front when I arrive there by moving my arse forward. That costs in aerodynamics but you gain some stability, which helps on the brakes.” 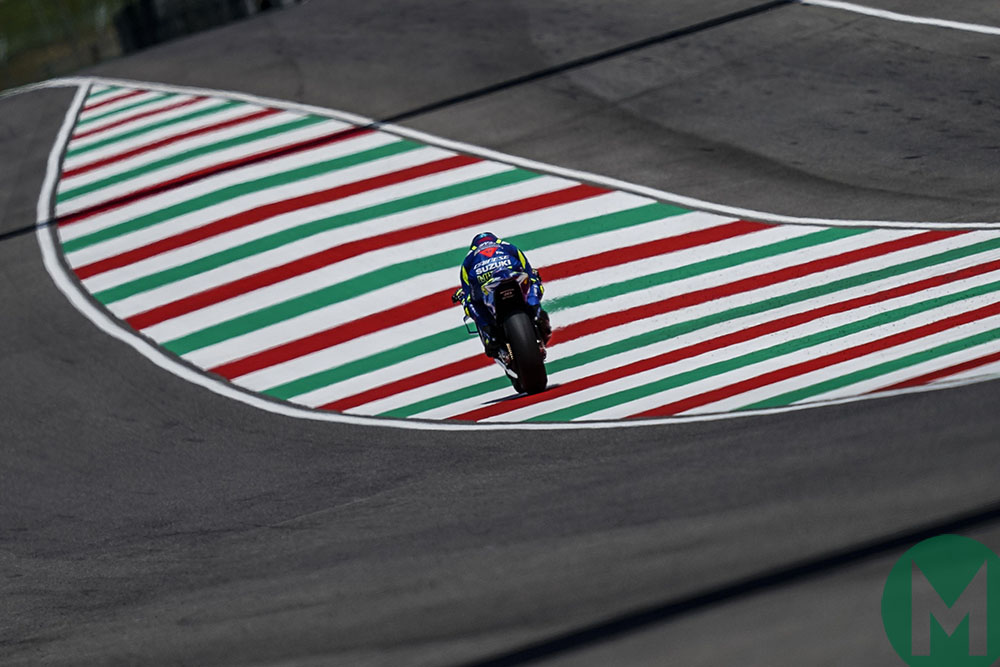 Joan Mir lines up the kink on the pitlane kerb Photo: Suzuki

Valentino Rossi knows the section better than anyone. He was one of the last to ride it on a 500 and his famous 2008 Mugello helmet – Aldo Drudi’s version of Edvard Munch’s The Scream – told the story of the horror of the kink.

“There’s been a big difference in speed since 2001,” he says. “Now it’s more scary because you arrive there a lot faster and when you go over the hill you jump with both tyres. In some ways the 500 was more difficult because we had no wings or anti-wheelie. The wings make the bike wheelie less but the jump is bigger. It’s always scary and every lap it’s an emotion.”

MotoGP’s latest aerodynamics certainly make bikes more stable at speed, but that allows riders to take the kink even faster, so the aero both giveth and taketh away.

“The wings have changed the reaction of the bike there and what you have to do there,” says Ducati’s Andrea Dovizioso. “But if the speeds get any higher we will be really, really on the limit.”

Rossi is one of many riders who thinks the time has come to do something about the corner with no name.

“Arriving at the jump at 350kmh [218mph] it’s starting to be dangerous,” adds the seven-times MotoGP king. “Maybe we need to modify it a bit, but it won’t be easy. Maybe we can try to cut the jump a bit, to make it more flat.”

After Marquez’s 2013 crash – when he slid alongside the trackside wall at terrifying speed – some changes were made. The left-side wall was moved back slightly. But as speeds increase, more needs to be done.

“We have already spoken about it in the safety commission,” says the reigning world champion. “Mugello is a great circuit, one of those that follows a natural layout, so it’s really nice to ride. The only critical point is the end of the straight. Already they changed the wall and now we are speaking about making the hill a bit different, because now you have uphill, then downhill where we brake, so the bike shakes there. The bikes get faster every year, so we need to do something, we need to make it more flat.”