Mystery continues to surround Lorenzo’s future. The latest from Yamaha: “If we can do a satellite team, we’d love to, but if we can’t, we won’t” 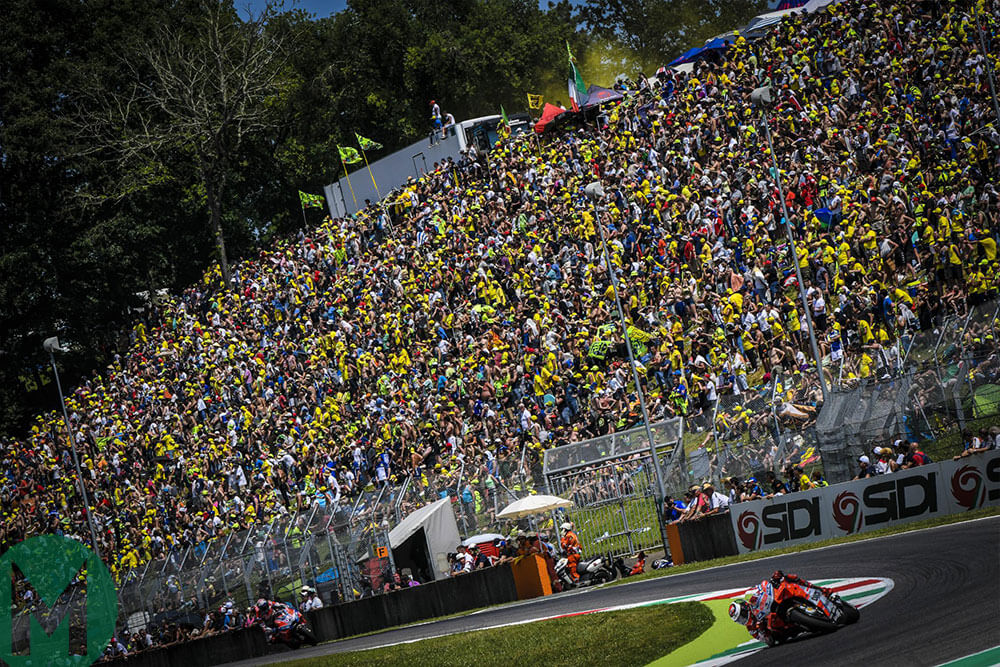 It could hardly have been a better Italian Grand Prix for the Italians. Through the red and (mostly) yellow smoke haze, Jorge Lorenzo waltzed to his first Ducati win to be joined on the podium by team-mate Andrea Dovizioso and national treasure Valentino Rossi.

After 24 races together Lorenzo and Ducati finally gelled and left everyone trailing. Their winning secret? A €100 lump of plastic stuck to the rear of the Spaniard’s Desmosedici GP18 fuel tank, which gave him the support he needed during braking, so he wasn’t exhausted by two-thirds race distance.

All of a sudden, the future looks bright for Ducati. The factory has done for Lorenzo what it never managed to do for Rossi: transform the maddest bike on the grid into a motorcycle that can be (almost) ridden like a Yamaha, the friendliest bike on the grid.

As this silliest of silly season lurches from rumour to truth to lie and back to rumour again, Ducati and Lorenzo announced their divorce just moments after they had finally consummated their marriage.

Exasperated by Lorenzo’s apparently excessive financial demands, Ducati management – possibly those at VW Audi in Ingolstadt as much as those at Borgo Panigale – want to replace the five-times 250cc and MotoGP world champion, most likely with former European Superstock runner-up Danilo Petrucci. This is wonderful news for the affable (and much cheaper) 27-year-old Italian, but will Petrucci be able to do for Ducati what Lorenzo can do, now that Lorenzo can ride the Desmosedici the way he wants to ride it?

But no worries for Lorenzo if Ducati does show him the door. The embattled Yamaha factory is doing everything in its power to get its most successful rider of recent years back on a YZR-M1 for 2019, just as it did with Rossi in 2013, after the Italian’s similarly brief but less successful sojourn with Ducati.

Except there is a problem. Yamaha has lost its faithful independent team, Herve Poncharal’s Tech3 outfit, to KTM and is now hurrying to throw together a team that can put bikes on next year’s grid for Lorenzo.

“It’s still a mystery what will happen,” said Lin Jarvis, Yamaha Racing’s long-time managing director on Sunday evening. “Our plan was quite straightforward – we were negotiating with the Marc van der Straten team as the optimum way of replacing Herve’s outfit. That would’ve made a lot of sense because they also have a Moto2 team, so they have a young rider channel, which makes sense from our point of view. We were quite close to reaching an agreement, until the team went into meltdown.

“My understanding is that the situation within that team is not yet resolved. There obviously is a resolution because otherwise the team wouldn’t have been at Mugello this weekend but I don’t think there’s a full resolution yet due to the conflict between the parties. Hopefully they will finish the season and then the question is whether or not they will go on racing next year.

“But while we are waiting for clarity on that, there are alternative ideas that are being discussed, so we are waiting to see whether they will become a solid plan or not.

“We would like to have four bikes on the grid, but first there is the question of timing, because the deadline for placing orders for bikes is the end of June. Second, we need a quality team with quality representation and also money, because the lease bikes are pretty expensive. So one of the primary conditions for us is that we need a guarantee that somebody will pay for the bikes.

“But if it gets to the situation where nothing is clear and we’re beyond the order deadline we’re not going to put ourselves in difficulties because the same factory that produces the parts for the satellite bikes produces the parts for the factory bikes, so if you delay one process, you delay the other, so we’re not going to shoot ourselves in the foot by waiting for a satellite team. That’s why there’s a certain deadline. If we get beyond a certain time and there’s nothing solid sorted then we’ll say, okay we’ll just run two bikes next year and wait until 2019 to decide to do something else.”

In which case, what will happen to Lorenzo?

“It’s a unique situation for us, because we have had 18 years with Herve. But we’re not particularly stressed by it, because we have a factory team in place, all signed up, which is our primary interest, so if we can do a satellite team, we’d love to, but if we can’t, then we won’t.”

The people who want to put Lorenzo on a Yamaha next year therefore have until June 30 to come up with the many millions of euros to pay the rider and to pay for the bikes.

There is money available. Malaysia’s government-owned oil giant Petronas has formed a partnership with the Sepang circuit, called Sprinta Racing, to develop bike racing in South East Asia, where the sport is booming. They have deep pockets and are keen to have their names on Yamahas ridden by Lorenzo.

But what about the team that will put the bikes, riders and money in place?

This is much more complex. Marc VDS is still in a mess, with no ready solution, and has apparently already renounced its MotoGP grid slots to focus on the smaller classes. The team’s former principal Michael Bartholemy was at Mugello, no doubt hurrying to create his own MotoGP team for 2019. But the Japanese hate the whiff of scandal, however real or imagined, so the explosion at Marc VDS won’t help.

The solution might come from Sepang itself, which currently runs the SIC (Sepang International Circuit) Moto3 and Moto2 team in MotoGP and the FIM CEV series. The SIC outfit is managed by former 250 GP rider Johan Stigefelt.

And then there are the other rumours; Lorenzo taking Dani Pedrosa’s seat at Repsol Honda and Jorge Martínez’s Angel Nieto team running Yamahas with Lorenzo, even though they made an agreement to continue with Ducati at Le Mans.

“We have an agreement with the Martínez team, but this world is changing very quickly,” said Ducati’s sporting director Paulo Ciabatti after Sunday’s race. “We have received a confirmation from them for next year, but at the moment it’s only a confirmation, without a contract.”

Then Ciabatti let slip that perhaps the Ducati/Lorenzo divorce isn’t finalised, after all.

“Jorge’s victory is very important but unfortunately it’s come very late,” he added. “I don’t mean that a final decision has been made, but obviously we have been discussing alternatives, just as Jorge has been considering alternatives.”

In other words, this year’s silly season changes shape, not daily, not even hourly, but minute by minute. And the permutations are endless. If VW Audi (and Philip Morris) management swallow their pride and open their chequebook, maybe they can keep Lorenzo. If not, perhaps there’s another factory that might suddenly find room for the only rider who can really take the fight to world championship leader Marc Márquez.

But if Lorenzo’s last hope rests on someone trying to unite Petronas money and Yamaha bikes in an independent team, they have just 26 days to get everything in place. The clock is ticking…