In March 1975 British youngster Barry Sheene was in Florida, USA, trying to conquer the Daytona 200, at that time the biggest motorcycle race of them all.

If the riders were somewhat scared of these new weapons – liable to seize their engines or break into tank-slappers at any moment – the tyre engineers were terrified. Because they held the lives of the riders in their hands.

Quite simply the tyres weren’t good enough for the motorcycles, so they kept blowing apart at high speed and flinging riders to the ground.

And this is what happened to Sheene – at around 170mph – as he tore around the Daytona banking during pre-200 testing.

“I remember thinking, oh God,” said the 24-year-old in a documentary made by ITV about his Daytona campaign. “I was rolling and I could feel all my skin coming off. I didn’t feel the leg because all I could feel was the skin tearing off my shoulders and that. When I stopped, I thought, Christ, I’m still alive – it didn’t kill me, didn’t even knock me out. I went to get up and looked down, and my leg was right-angled, poking under the other one.

“If I’d been a racehorse I would’ve been shot.”

Sheene was treated trackside, then rushed to the Emergency Room at the nearby Halifax hospital, his legendary sex drive apparently undimmed by that off-your-head cocktail of pain and painkilling drugs.

“In the ambulance Barry didn’t appear to lose consciousness at any time,” said Suzuki team manager Merv Wright who accompanied Sheene to hospital. “In fact he was so coherent he was chasing the Emergency Room nurse… verbally, of course.” 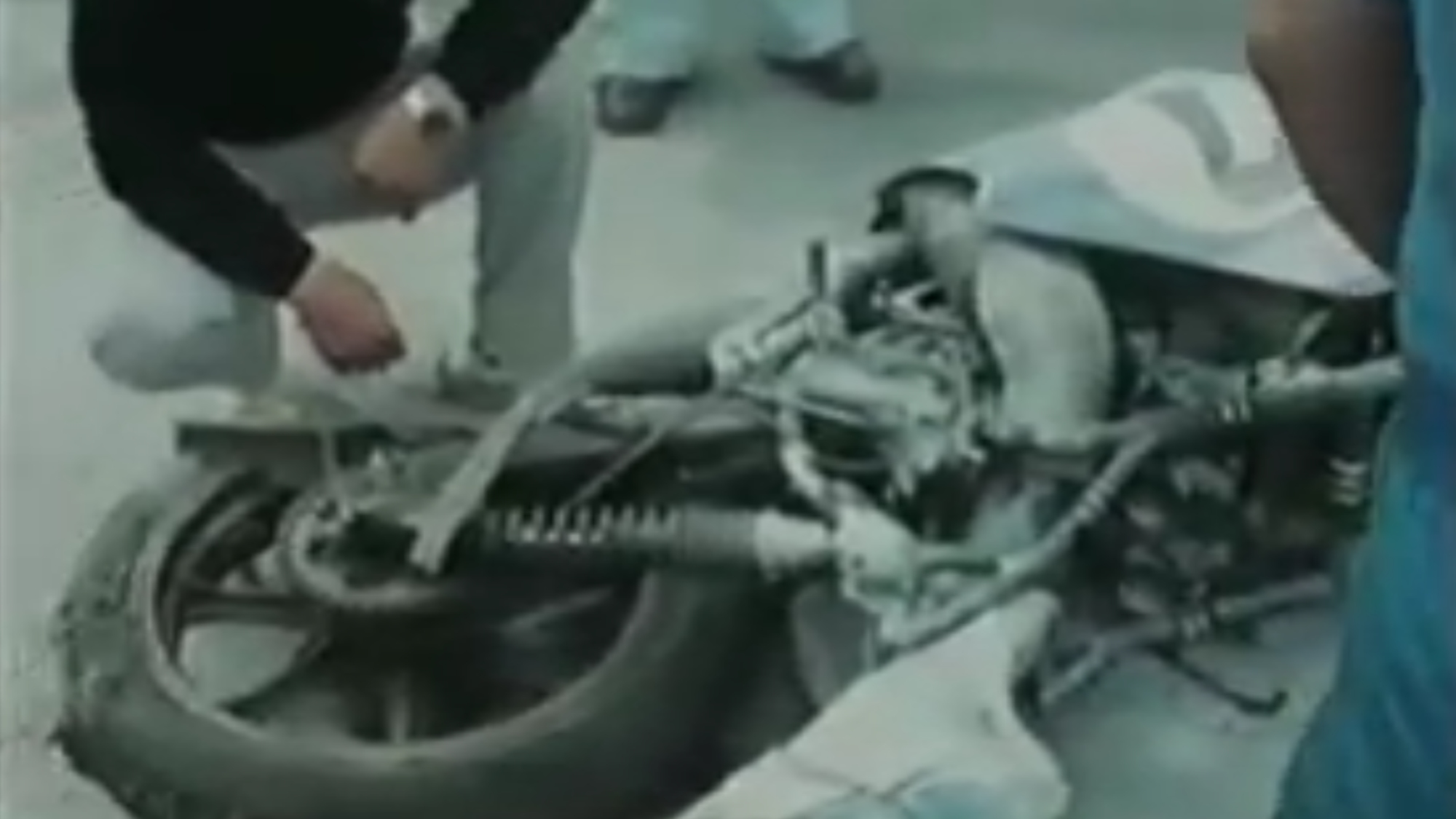 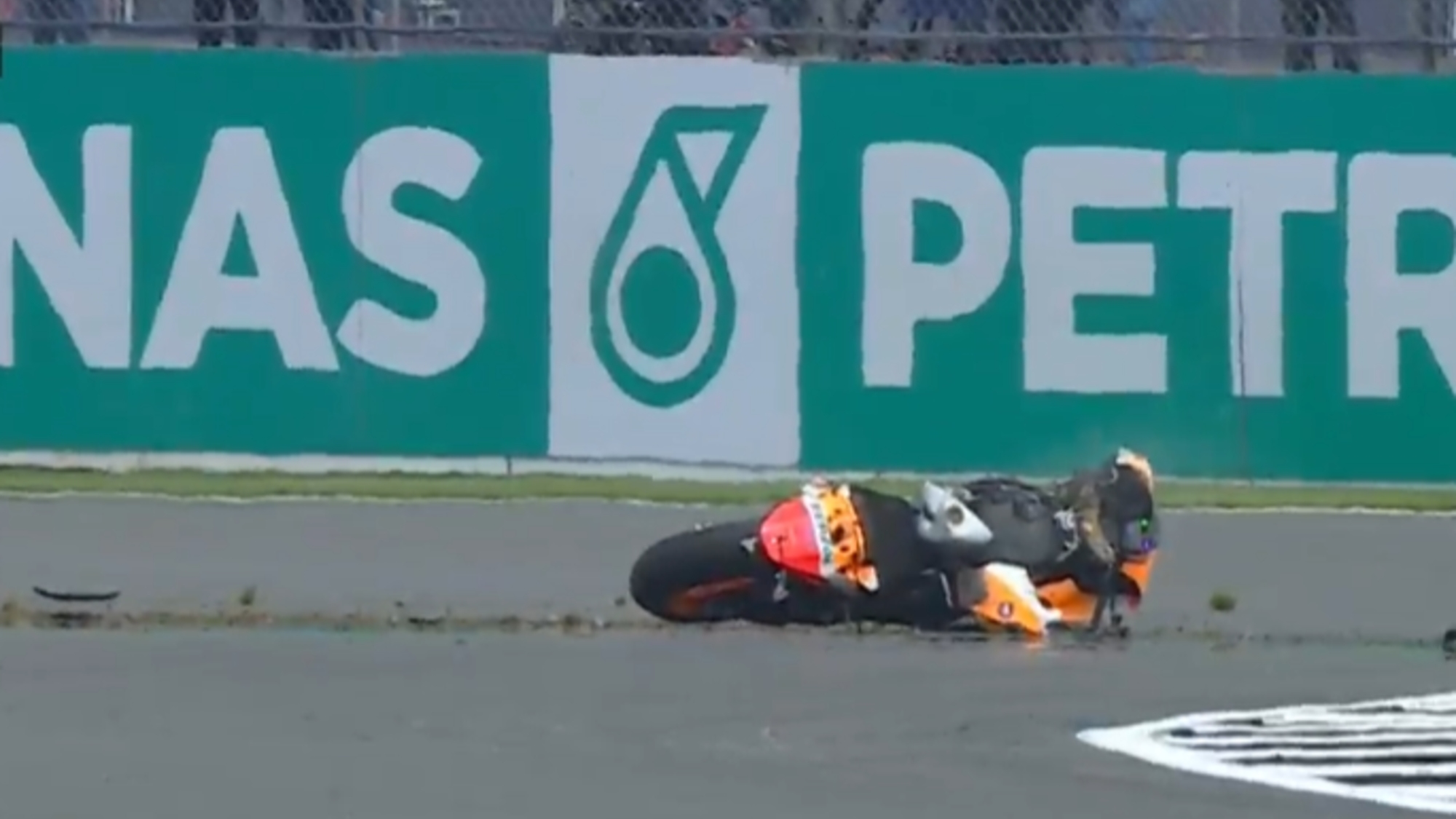 “I feel like I’ve been barbequed,” he said at the time.

Sheene remained in hospital for several weeks, amazing the medical world by returning to racing seven weeks after the accident, at a British national event. Three months after the crash he won his first premier-class grand prix, beating Giacomo Agostini’s MV Agusta by a centimetre or two at Assen. This is still the all-time closest finish in GP history, because there was no stopwatch or photo-finish equipment that could separate the pair, so they were given the exact same race time.

A little more than a year later – 20t July, at the Swedish GP at Anderstorp – Sheene secured the first of his two 500cc world titles.

The 40cm plate and multiple screws inserted to fix the broken femur were removed later (live on television!), but the leg injury haunted him for years. Each morning he had to massage the bad leg for 30 minutes before he could go about his day. 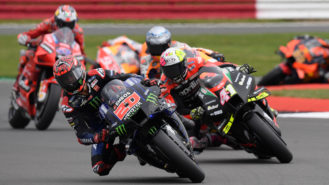 British MotoGP: Quartararo surfs towards the title while his main rivals drown in a sea of tyre troubles

Quartararo’s fifth victory was a thing of beauty, but his two biggest title rivals were nobbled by dud tyres yesterday

Forty-six years after Sheene’s Daytona accident Marc Márquez was preparing his Repsol Honda RC213V for the 2021 British GP at Silverstone. He was already fastest in Friday morning’s FP1 session when he commenced his final run on the same soft/medium tyres he had used throughout the session.

He had started his first flying lap and was heading towards Turn Two, a 100mph left-hander, when the front tucked and down he went, at 170mph. Most likely his front tyre wasn’t up to optimum working temperature, due to the chilly weather and strong winds.

“I went out in FP1 and felt very, very good on the bike and I was able to ride like I want,” he said. “Unfortunately we had a big crash at the end of the session,” said Márquez, apparently unfazed by such a high-speed shunt, which, to be fair, was almost 40mph slower than his 2009 crash at Mugello in 2013, MotoGP’s fastest.

True, the Sheene and Márquez accidents were not identical. Sheene was thrown from his XR11, while Márquez took the low-side exit from his RC213V, but they were more alike than you might think.

Sheene tumbled along the Daytona asphalt for a couple of hundred metres, while Márquez slid down the road at Silverstone for a hundred metres until he reached the trackside grass, which threw him into a nasty barrel roll. He rolled over and over, at least a dozen times, tucking in his arms, finally coming to rest back on the track between Turns Three and Four.

Sheene’s crumpled body was loaded into an ambulance, with those attending him fearing or his life. Márquez briefly knelt on all fours, getting his breath back, then stood up and, although he didn’t look that steady, was able to walk away and return to his garage for a post-session debrief. 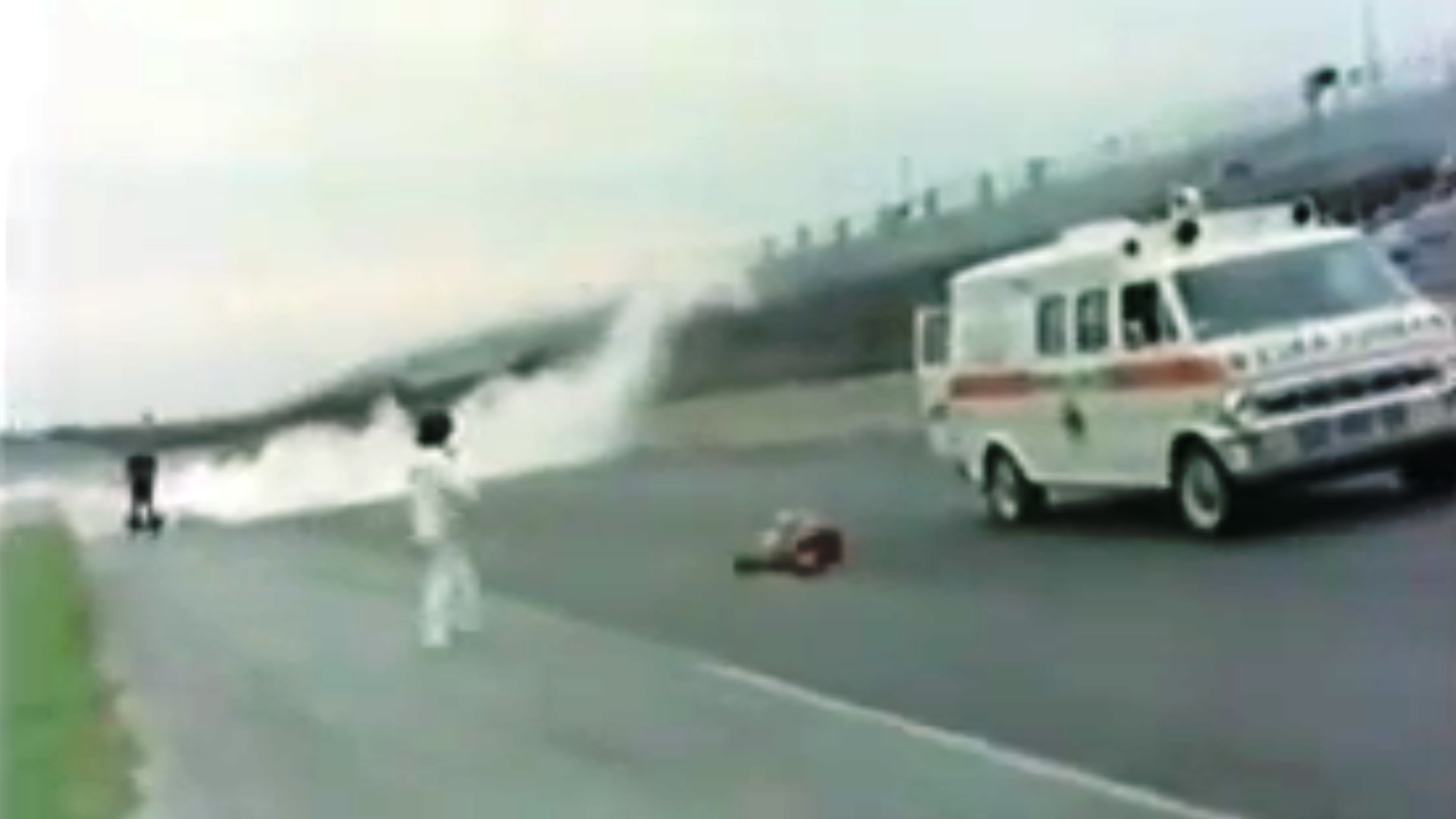 The immediate aftermath: Sheene lies in the track at Daytona 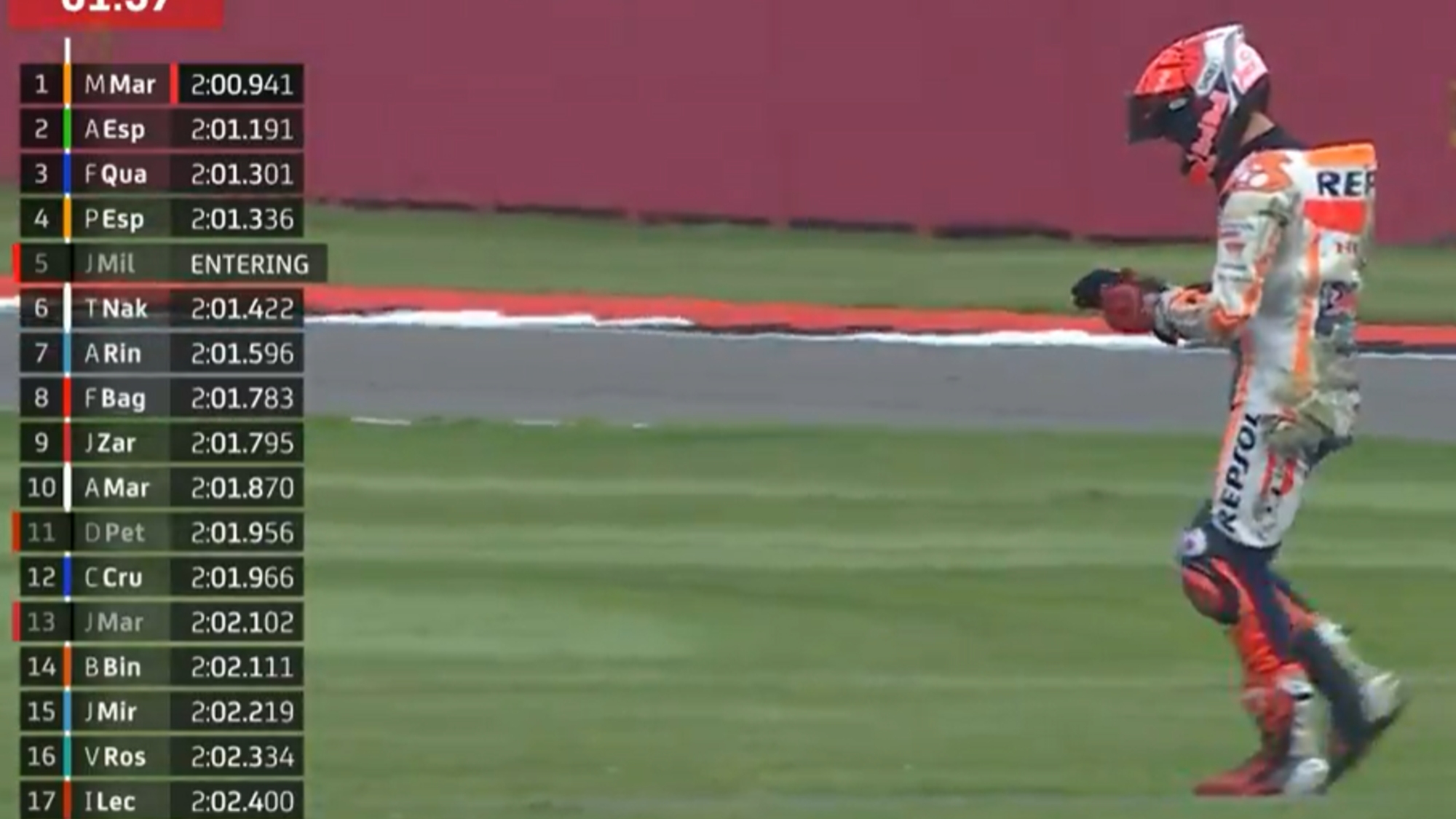 Márquez is immediately up on his feet

The MotoGP crash data records the crash thus: 10.37am, marshal post three, rider OK. Although Márquez had broken no bones he was hardly OK. Every inch of his body was in pain, like he’d jumped out of a high-speed train. Of course, this is something the six-times MotoGP king – and most other MotoGP riders – isn’t unused to dealing with.

After extensive medical checks and physiotherapy Márquez was back on his RC213V three and a half hours later for FP2, during which he bettered his FP1 times by almost a second.

His main problem was his right eye, which had ingested a spec of dirt during the accident, which he scratched while trying to clean it out. This caused some weeping from the eye, which required a visit to hospital later in the day. Doctors advised him to rest his eyes by keeping them closed.

On Saturday Márquez was tenth fastest in FP3, fourth in FP2 and qualified fifth for the race, his best lap less than two tenths slower than pole position. He had a real chance of a podium in the race but crashed out on the first lap after making contact with Jorge Martin. 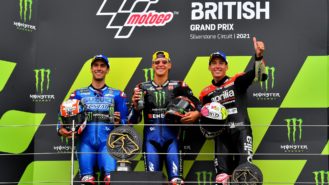 Aleix Espargaró’s brilliant Silverstone third place was the result of years and years of blood, sweat and toil

Márquez is still in recovery mode from the worst accident of his career – a broken right upper arm sustained at Jerez last July – so he’s still not at 100%, either physically or as a rider.

Most importantly, he can’t yet use his right arm and elbow as an outrigger, a vital part of his spectacular riding technique.

No one is more aware of this than the man himself. “The main thing now is to prepare myself and the bike in the best way for 2022,” he says.

The contrast between the injuries sustained by Sheene at Daytona 1975 and Márquez at Silverstone 2021 couldn’t be greater. Sheene wore leathers, boots and gloves that would be considered little more than fashion items today. At that time there was no science in the safety kit business. Only rudimentary efforts were made to protect riders – a leather suit with no internal protection.

The first set of leathers I bought in the late 1970s were so comfy and light, they were more like a leather onesie. The only consideration for what might happen when you fell off your motorcycle was an extra layer of leather at the elbows, shoulders and knees. Inside these pads was a foam filling, a bit like a washing-up scrubby, not even half a centimetre thick. The leathers must’ve weighed two or three times less than a modern racing suit.

During my first few seasons of racing I had small chips of bone and other scar tissue permanently floating around beneath the skin on my elbows, because every time I crashed I chipped or cracked something in at least one elbow.

In the early 1980s we got back protectors – form-moulded from a single piece of rubber foam. By the time I stopped in 1991 we had similar mouldings to protect shoulders, knees and elbows, which we inserted beneath our leathers.

Today’s kit used by MotoGP riders is from another world, designed via scientific accident data – airbags, composite padding and so on – which allows riders to crash at speed without serious injury. You may look like a cyborg but who cares?

The world of motorcycling owes a huge debt of gratitude to the leaders in this area of expertise – Alpinestars, Dainese, Arai, Shoei, AGV and all the other brands that protect racers and everyday riders.