Andrea Iannone has been suspended from racing for 18 months after testing positive for an anabolic steroid.

The Aprilia rider claimed that contaminated food may have been to blame for the result at last year’s Malaysian Grand Prix.

In a statement, Aprilia said that it had “complete faith” in Iannone, and that the ban was “absurd” because the judge had accepted his argument.

“The judges recognised Andrea’s complete good faith and unawareness of assuming the substance, confirming the food contamination argument,” said Massimo Rivola, Aprilia Racing CEO. “For this reason, the penalty imposed does not make any sense.

“This scenario opens up new possibilities of appeal for Andrea Iannone.” 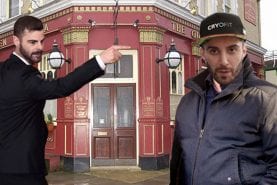 In MotoGP, all the world championship’s a stage

The news that Andrea Iannone will manage Romano Fenati had the paddock agog at Misano. So what to expect from MotoGP’s latest soap opera? Iannone & Fenati plot twist in the…

Rivola indicated that Iannone was likely to appeal the ban, which runs until June 16, 2021. With racing effectively suspended, an appeal may be heard before the start of the season.

“In light of the motivations written by the judges themselves, Andrea should have been acquitted, as has always occurred to other contaminated athletes, but this situation leaves us a lot of hope for the appeal which we hope will be very quick,” said Rivola. “We want Andrea back on his Aprilia RS-GP. We will be by his side all the way to the end of this matter and we will support him in his appeal.”

Test rider Bradley Smith, who replaced Iannone in this year’s preseason testing, is likely to take the Italian’s place if he remains banned when racing resumes.

Iannone has been suspended since the findings from the routine drugs test were announced on December 17 last year.

A second B sample also showed traces of an anabolic steroid. Iannone then challenged the case at the CDI.

The hearings were held in February and the decision announced today.

“The FIM International Disciplinary Court handed down on 31 March 2020 a decision imposing a period of ineligibility of eighteen months on Italian MotoGP Rider Mr Andrea Iannone, commencing on 17 December 2019 and which shall end on 16 June 2021,” the FIM said in a statement.

“An appeal against the CDI decision may be lodged before the Court of Arbitration for Sport in Lausanne, Switzerland within 21 days from the date of receipt of the CDI.”