Assen was despoiled some years ago, just like Catalunya more recently, but then the history of racing is a history of epic race tracks disappearing 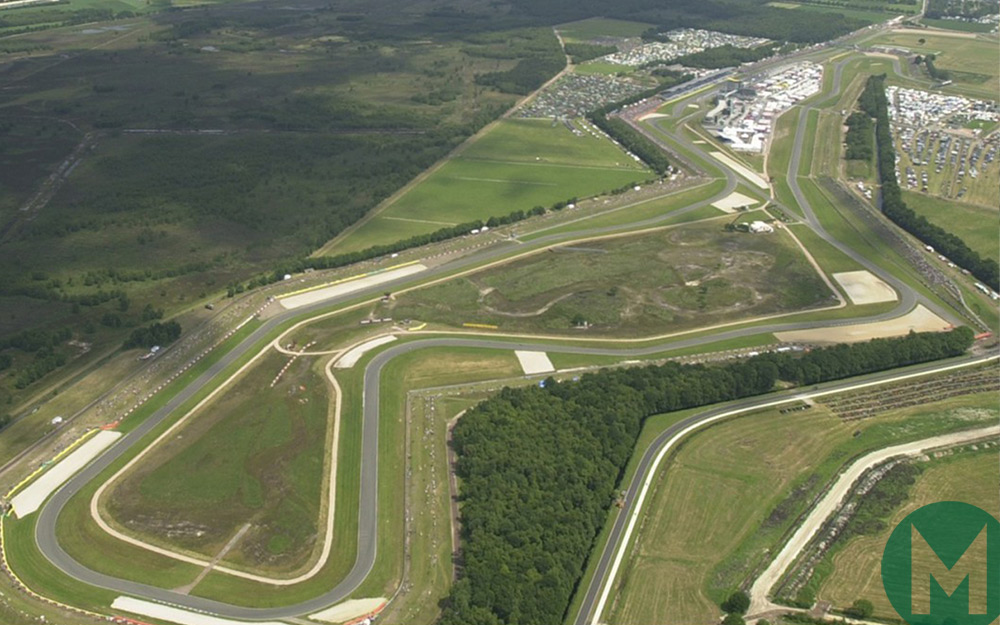 Being an old MotoGP journalist is a bit like being a very old man. You keep losing the people you love, or in this case, the circuits you love. This week the paddock goes to Assen, once the most fascinating circuit on the championship calendar because it was entirely unique, offering a special challenge to riders and engineers alike.

The old Assen (shown above in all its glory) had all kinds of tricks hidden in its 3.7 miles of serpentine curves, from devilishly tricky cambers to 160mph direction changes that had to be ridden just so to prevent your machine from convulsing into the mother of all tank-slappers. The brainwork needed to solve these conundrums involved everyone, from riders to engineers to mechanics, tyre technicians and suspension twiddlers. If a rider won at Assen, his crew knew as well as he did that they had done something very special. Not for nothing was the place called The Cathedral.

And then in the autumn of 2005 along came a philistine in a bulldozer. He demolished the cathedral, digging up the northern part of the circuit to make way for a barn-like exhibition centre called TT World. The reason behind this heinous act of mutilation was, of course, money. The people behind Assen had got themselves into a spot of financial bother, so they sold off half the circuit. A bit like your favourite auntie selling a kidney to pay off her mortgage.

I always looked forward to going to Assen and taking a wander out to Madjik, Ossebroeken or any of the other breathtaking kinks too numerous to have names. Or even better to Veenslang, where the 500s flicked from side to side on full gas at 140mph, revs rising, falling and rising again as the bike flip-flopped from one edge of the tyre to the other, handlebars in a high-speed shimmy as the rider held his breath and balanced his body just so. Watching Kevin Schwantz and the rest do that never failed to make the hairs on the back of my neck stand to attention, saluting the bravest of the brave.

The modern Assen has just a few hundred metres remaining of that heroic high-speed asphalt. Meeuwenmeer, Hoge Heide and Ramshoek are proper tests of rider skill and daring, but otherwise the place is a shadow of its former self; it’s now just another race track. 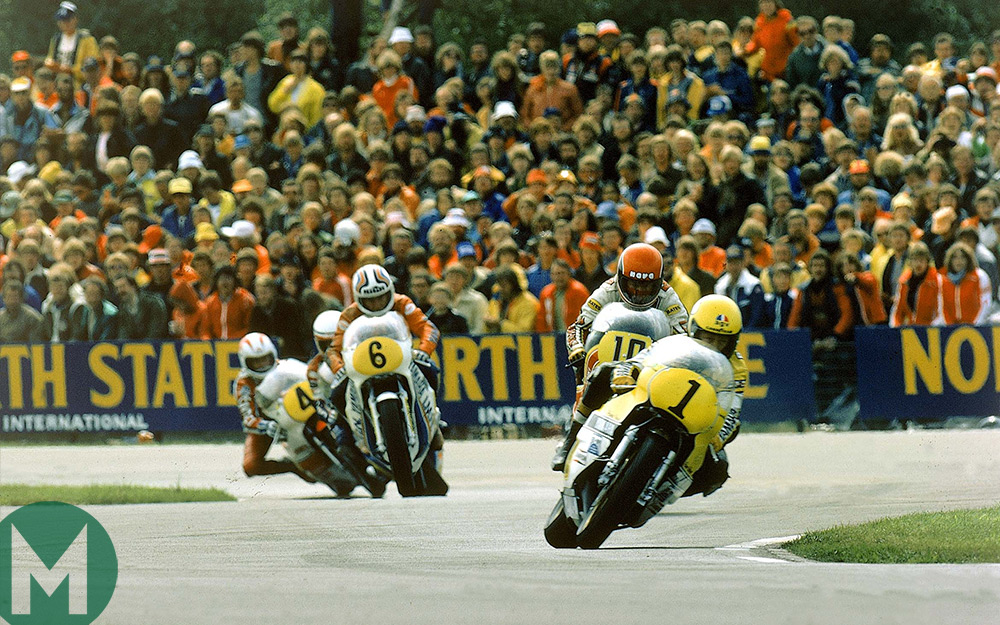 More recently the philistines have been at work in Spain. From 1992 the Circuit de Barcelona-Catalunya was one of MotoGP’s greatest circuits, with all kinds of challenges for riders and engineers. And each lap and each race was brought to a thrilling climax by the track’s final sector. Riders could have a good go at out-braking rivals into the downhill left at Turn 10, and if that didn’t work they could build speed through the final three corners and perhaps pull off an unforgettable win, just like Valentino Rossi in 2009.

That all changed last June when Luis Salom lost his life at Turn 12. “El Mexicano” died when his bike rebounded from the air fence and met him coming the other way. Riders had already complained about the lack of run-off at Turn 12 but were told there was no room to increase it.

The reality is that there is enough room. A quick look at Google Maps in satellite mode shows there’s plenty of free space beyond the grandstands that’s currently used for car parking. And the stands at Turn 12 are steel erections, unlike the more permanent concrete stands that line the track before the corner.

At the time of Salom’s death we all wondered what his legacy would be. Sadly, the new layout isn’t the legacy he would’ve wanted. I am 100 per cent certain that wherever he is right now, he will be saying: not in my name.

Compromises have been made, as is the norm, because we don’t live in a perfect world. Catalunya also hosts a Formula 1 race and its finances are not in the best state. Keeping everyone happy – MotoGP riders, F1 drivers and the bank manager – isn’t easy.

Whatever the reasons, right or wrong, the final sector has been ruined. It has been transformed into a series of itty-bitty, follow-the-leader corners that provide no great enjoyment for riders or fans. And with that the character of the whole circuit has also been destroyed.

The creation of a new but short-lived MotoGP chicane for this year’s race only made matters worse. Most riders agreed that this was the way forward and then many of them changed their minds.

The new layout was “just f***ing shit”, according to Loris Baz. Aleix Espargaro added that the new layout isn’t “fun and it was one of the most fun tracks in the world”. So halfway through this year’s GP the circuit switched back to the F1 chicane, which is better, but only just. This little incident didn’t show anyone in a good light: the riders who changed their minds, the FIM, Dorna and the circuit. It was also an expensive mistake, with the now disused MotoGP chicane costing a reputed six-figure sum.

Could this have been done better? I like to think so, but I’m glad it’s not my job to negotiate a way through complex, conflicting interests. Whatever, Barcelona is no longer a classic, majestic circuit. Like Assen, it’s now just another stop on the MotoGP world tour.

Of course, you can’t argue for less safety, but every time another epic venue is cut and emasculated or simply removed from the championship I can’t help but feel that the spirit of racing dies a little.

In the 30 years I’ve been covering Grand Prix racing many great circuits have disappeared. To name but a few: God’s own race-track Spa-Francorchamps, Hockenheim, Laguna Seca and the Salzburgring, a circuit so mind-bogglingly fast and so achingly picturesque that some top riders could almost forgive those several miles of cold-steel rail that abutted the asphalt.

Would I like to see MotoGP bikes riding these circuits? Hell, yeah. But I’m not stupid enough to think it would be a good idea. 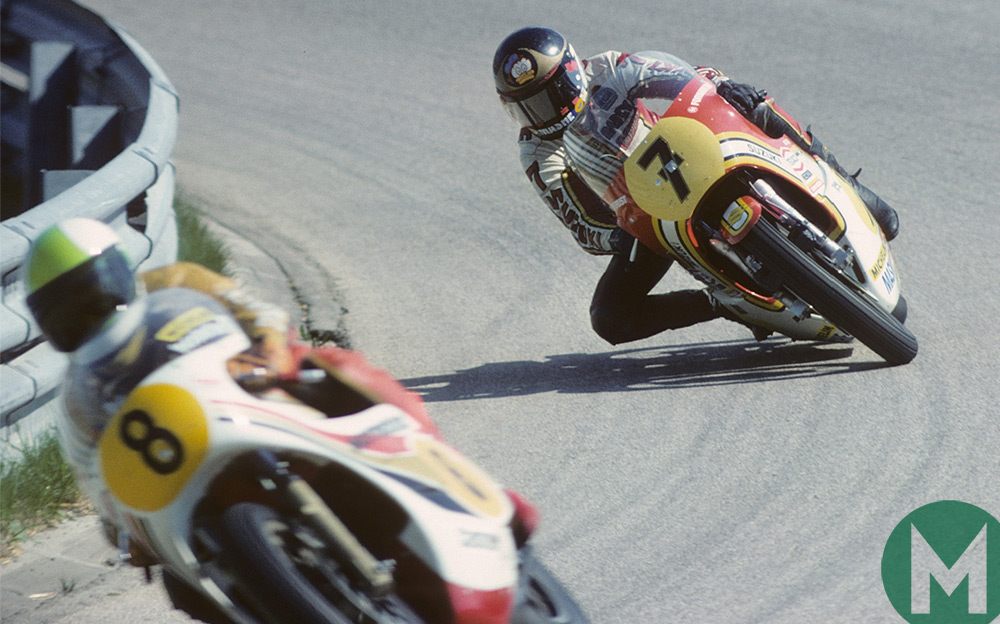 And yet there’s a strange irony here. The three greatest riders of the Salzburgring’s final years as a GP venue were all vigorous safety campaigners but they also adored the challenge and terror of the Alpine circuit that rode along the sides of a steep, verdant valley.

Mick Doohan still speaks of the literally awesome high-speed zigzag at the top the Salzburgring’s hill, where riders rode a narrow ribbon of asphalt between the valley wall and Armco barrier at 160mph. “The steering suddenly went light and the back end broke away – so the whole bike was breaking loose and sliding at close to top speed… To me, riding a bike like that at those speeds is why I liked racing.”

Schwantz felt the same way. “The reason I liked it so much was that you were leaning on the grass through the left and the guardrail on the right, probably certain death if anything were to go wrong.”

And Wayne Rainey too. “It was dangerous but it was great. There was a fascination about that 160mph left/right with the dip in it at the top of the hill. It was awesome, it was fun, it was good.”

Thankfully we still have some great circuits left in MotoGP that are epic enough to get the blood pumping, whether you are racing or just watching. My favourites are Mugello, Phillip Island, Silverstone, Brno, Sepang, Aragon and Sachsenring (conveniently forgetting the first four corners). I hope they all stay unspoiled for many years to come.