There’s been so much talk about Yamaha’s 2019 and 2020 YZR-M1s in recent weeks that this may be a good time to look into the joys of second-hand MotoGP bikes.

Fabio Quartararo, Valentino Rossi and Maverick Viñales can’t revert to 2019 M1s due to MotoGP engine regulations but you can be sure they would if they could, because the 2019 M1 chassis seems to be better balanced than the 2020 version.

Factories never like to admit that their new motorcycle – the result of months of hard work and god-knows-how-much investment – is worse than the old motorcycle, but sometimes it happens. Quite often in fact.

Usually factories try to hide the truth and sometimes they get away with it, because the differences between this year’s and last year’s engines or chassis may be invisible to pit-lane sleuths.

As Soichiro Honda once said, “Success is 99 per cent failure”

Other times there’s no way they can hide what’s going on.

Most famously Honda reverted to its three-cylinder NS500 during the first season of its four-cylinder NSR500, the machine that went on to become the most successful MotoGP bike of all time.

The first NSR500 of 1984 was the result of blue-sky thinking by a new team of engineers at HRC. Back then Honda always did things differently: when everyone else raced two-strokes Honda raced the four-stroke NR500, when Honda built its first two-stroke GP bike it used a three-cylinder engine, because Kawasaki, Suzuki and Yamaha raced fours, and when Honda created the four-cylinder NSR it put the fuel tank under the engine, because everyone else put their fuel tanks on top. 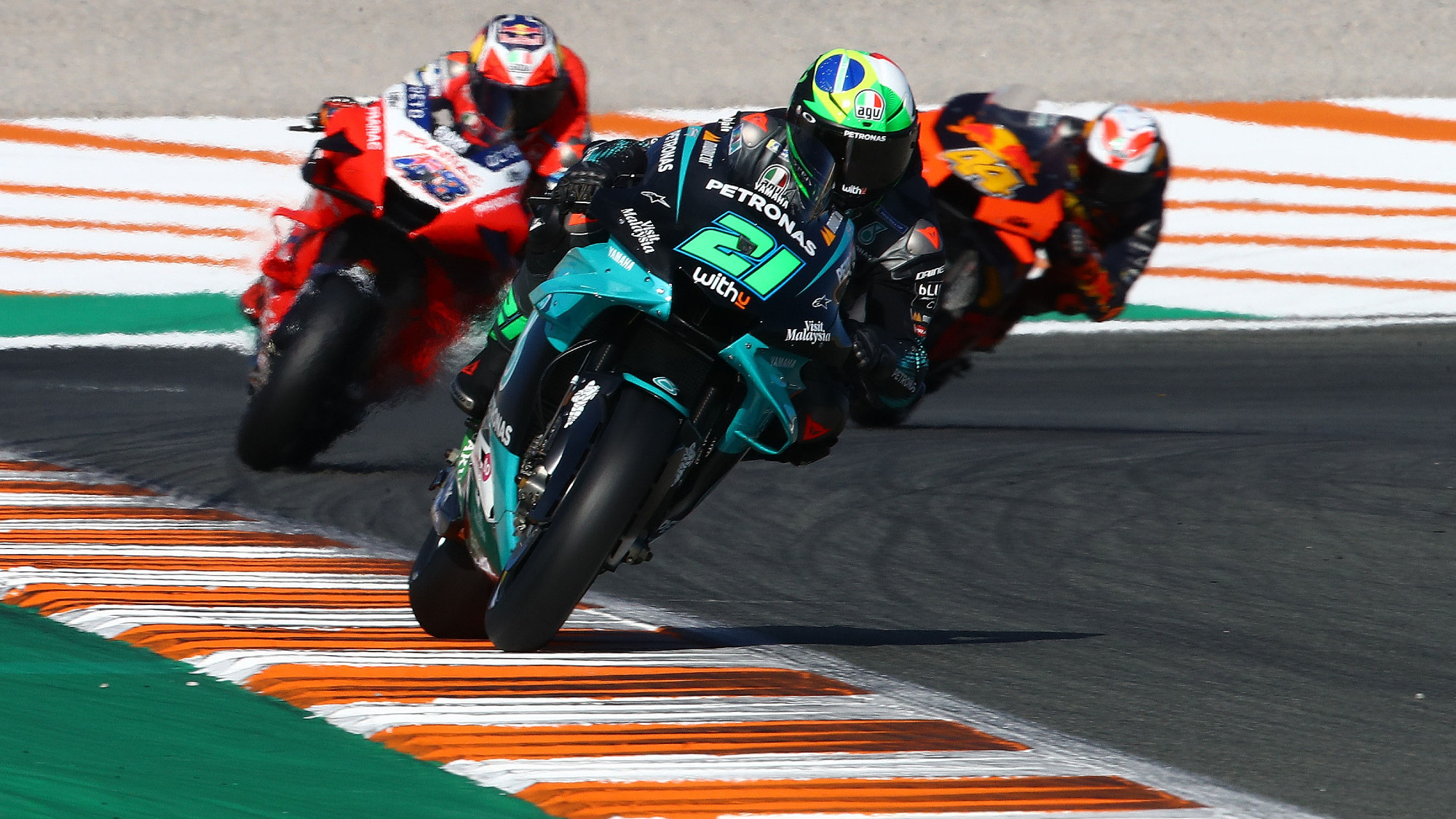 Yamaha management probably don’t know whether to laugh or cry. Franco Morbidelli’s superb third MotoGP victory was Yamaha’s seventh of the year and puts the factory back in the hunt…

The idea was to lower the centre of gravity, which was the way to go fast in car racing. The NSR’s underslung fuel tank only proved that lowering the centre of gravity too far isn’t the way to go fast in bike racing. But this was Honda’s way at the time – using grand prix racing as a radical rolling laboratory. As Soichiro Honda once said, “Success is 99 per cent failure”.

Freddie Spencer and the NSR won the second round of the 1984 500cc world championship but by the time he arrived at the Nürburgring for round five he was lagging far behind Yamaha’s Eddie Lawson.

On Friday evening Spencer, his crew chief Erv Kanemoto and HRC engineers had a meeting and decided to revert to the 1983 NS500 triple. Luckily, HRC had an ex-Marco Lucchinelli NS at its European workshop in Aalst, Belgium, only 160 miles away, so mechanic Stuart Shenton drove to Aalst, loaded the triple into the truck, returned to the track, checked and rebuilt the engine.

It was a long night but by the time Saturday morning practice began, Spencer had three bikes in his garage: two NSR500s and one NS500. The press was agog, swarming around the HRC garage, because this was a big deal.

Spencer took pole position on the triple, ahead of Lawson, and beat his fellow American by 15sec in the race. After that, he sometimes raced the NS and sometimes the NSR, usually depending on circuit layout.

The NSR to NS switch was an easy spot for nosy pit-lane journalists. Others have been less obvious. 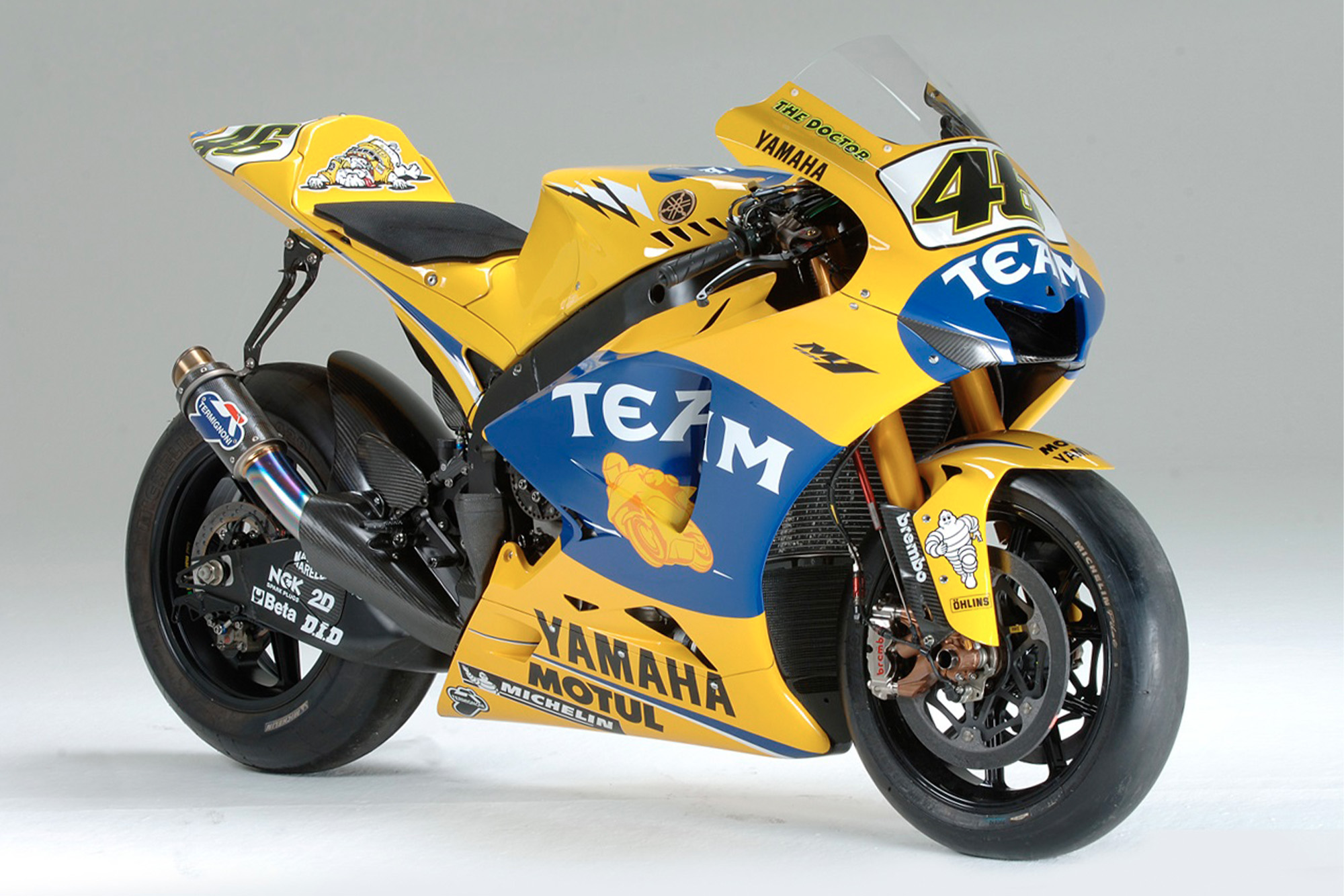 In 1994 reigning world champion Kevin Schwantz reverted to his 1993 Suzuki RGV500 chassis after his crew chief Stuart Shenton (who had switched from HRC to Suzuki where he played a vital part in Schwantz’s title success) noticed that Suzuki had made several mistakes with the 1994 chassis: stiffness, steering head, pivot point and so on. Schwantz won his final victories aboard this new/old RGV.

Yamaha has also been here. The factory went into the 2006 MotoGP season aiming for a title hat-trick with Valentino Rossi. When Rossi joined Yamaha in 2004 the YZR-M1 was the runt of the grid. The bike hadn’t won a single race in 2003 and had scored just one podium finish from 16 races, at rainy Le Mans.

On a bike revamped by Rossi, crew chief Jeremy Burgess and chief Yamaha Masao Furusawa, Rossi dominated the 2004 and 2005 seasons. For 2006 Yamaha made significant changes to the chassis, which worked well at the factory, but the bike chattered like crazy with Michelin’s new and grippier 2006 rear slick. Sound familiar?

Yamaha did everything they could to increase flex in the 2006 chassis – drilling the frame, cutting the frame and removing the cross brace between the main spars – but nothing worked.

Rossi scored just one victory from the first four races, so something had to be done. On the eve of the French GP Yamaha sent drivers scurrying around Europe to collect 2005 show bikes, most of them parked in the foyers of national importer HQs. At Le Mans, the 2006 engines were fitted to the 2005 frames and Rossi was immediately back up to speed. He ran away with the race – four seconds ahead at two-thirds distance – until the engine broke.

Yamaha never admitted that Rossi was using a 2005 chassis. Instead they called it a new chassis, because it had been slightly modified to take the 2006 engine. 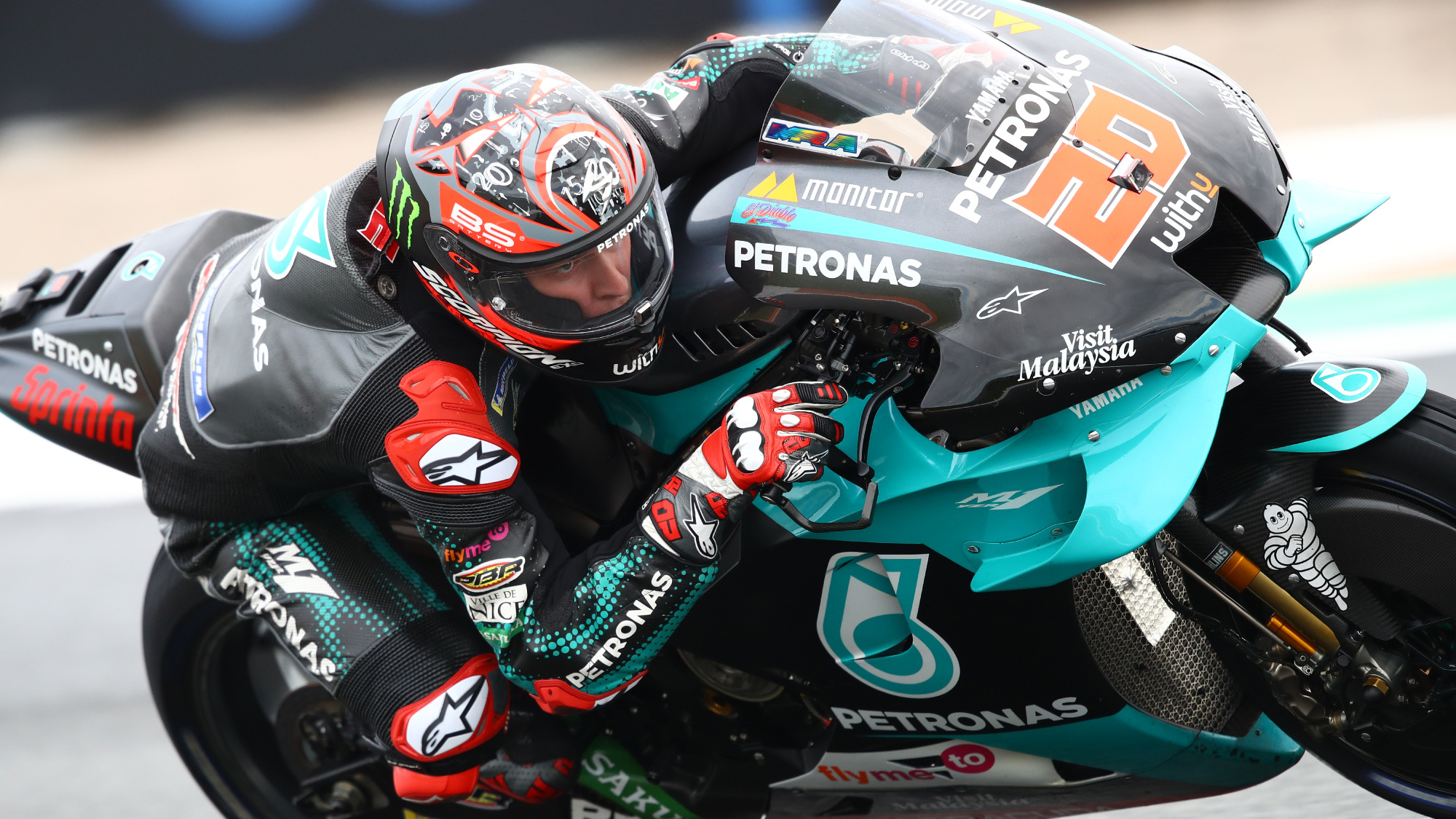 Halfway through the 2006 season Yamaha equipped Rossi with a fully new chassis, although this latest version was more of a redesign of the 2005 unit than any else. At the same time, Michelin revised its 2006 rear slick to better suit the bike.

Such things happen more often than most of us realise. Sometimes riders and factories admit they’ve switched into back-to-the-future mode, other times they don’t.

Certainly Yamaha didn’t try to conceal the truth at Valencia in 2017, when Rossi and Viñales reverted to the 2016 M1 chassis on race morning. All year they had struggled with the 2017 bike, sometimes outclassed by rookie Johann Zarco riding a second-hand 2016 M1, so they had planned to compare the two chassis back-to-back during the post-race Valencia tests. But they got so desperate they reverted on race day; a bizarre decision.

This year Marc Márquez started the season with a revised 2019 Honda RC213V chassis after he had struggled at the Qatar pre-season tests.

“The bike I’m riding is a 2019 with evolutions,” he said at the season-opening Spanish GP. “It’s an evolution, so it’s not the exact same frame, swingarm and engine.”

During the Losail tests no one knew why Márquez was finding things so difficult, but now we do – Michelin’s 2020 rear slick caused problems for Honda just as it has for Ducati.

MotoGP technology is at such a high level now that making improvements gets more and more difficult. And spec tyres only complicate matters for the factories, because sometimes a new spec tyre won’t work with the new bike. And nowadays the factories can’t ask their tyre company to tweak compounds or constructions to get them out of a hole.

For all these reasons it shouldn’t come as any surprise that Franco Morbidelli’s 2019 YZR-M1 took pole and race victory at the last race and Takaaki Nakagami’s 2019 RC213V took pole three races ago at Aragon.

Because sometimes second-hand is better than new. 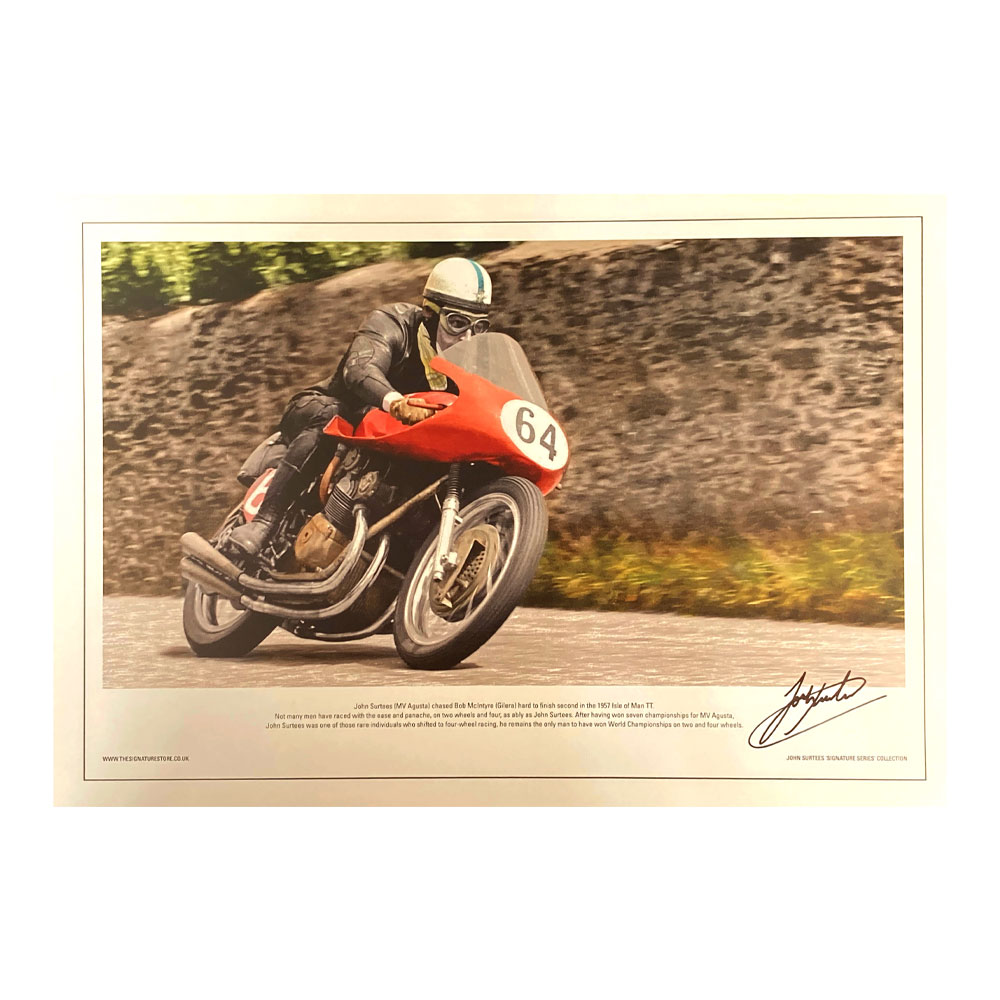