Sunday’s San Marino GP was a remarkable event for Valentino Rossi. The 41-year-old may have missed taking his 200th premier-class podium by a fraction of a second, but four of his protégés finished first and second in the Moto2 and MotoGP races.

VR46 Academy riders Franco Morbidelli and Pecco Bagnaia stood on the top two steps of the MotoGP podium and his half-brother Luca Marini and Sky VR46 team-mate Marco Bezzecchi were first and second in the Moto2 race.

This was an astonishing achievement – so far the high point of Rossi’s efforts to reinvigorate Italian motorcycle racing. The nine-times world champion created the VR46 Academy in 2013, since when it has cultivated a new generation of Italian talent: Morbidelli, Bagnaia, Marini, Bezzecchi, Nicolo Bulega, Niccolò Antonelli, Andrea Migno, Celestino Vietti, Lorenzo Baldassarri, Stefano Manzi, Dennis Foggia and others.

Rossi’s long-time mechanic Alex Briggs has visited the academy’s Motor Ranch outside his rider’s hometown of Tavullia on several occasions and believes the teacher/pupil relationship works both ways.

“Valentino said, ‘Okay, let’s help these guys 100 per cent and give all my resources to them’.”

“All those young kids at his ranch, they’re trying to kill him!” said Briggs. “They have a lot of respect for him but when they start racing him, they don’t care and that’s definitely got to help. They all want to be him and I think he loves that – it’s like he’s found the fountain of youth in Tavullia.”

All riders selected by VR46 become members of an extended family, who live, breathe, eat, sleep and race motorcycles. They are together all the time: they ride together, train together, learn about all aspects of racing life together, go to restaurants and nightclubs together and hang out together.

Morbidelli’s family moved to Tavullia from Rome when he was 13-years-old. His father, Luigi, had raced with Rossi’s dad Graziano, so he wanted his son to learn from the master.

By then Morbidelli was already working his way up the ranks, from Polini minimotos, to Conti 80s, Metrakit 80s, Pre-GP 125s and finally an Aprilia 125 GP bike. However, by then his parents had run out of money, so they switched to the cheaper European 600 Superstock championship, which Morbidelli won in 2013. That’s when he became the first VR46 rider. 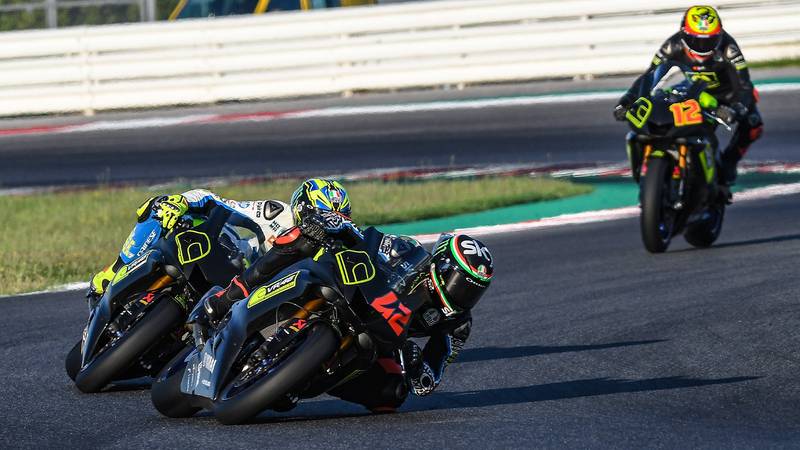 One reason VR46 riders are so fast at Misano: Bagnaia leads Lorenzo Baldassarri and Bezzecchi aboard the academy’s YZF-R6 bikes

At that time there was no structure, no nothing, just a bunch of young men fooling around and trying to get faster. Before Rossi built the Motor Ranch his gang rode dirt bikes around a local quarry. His initial arrangements with Morbidelli and other young hopefuls were entirely informal, but eventually Rossi decided that if he was to do a proper job he needed a professional set-up.

“Valentino decided to make everything official, making contracts with the riders who were training with him,” Morbidelli said. “Valentino said, ‘Okay, let’s help these guys 100 per cent and give all my resources to them’.”

Rossi has invested huge amounts in the academy, which is largely bankrolled by his merchandising, licensing and sponsorship businesses, which turn over around £30 million per year. The riders also contribute, paying ten per cent of their income.

“Vale is our teacher, he keeps us together, so we give our maximum and develop our natural skills.”

The academy covers all the bases, from the obvious to the not so obvious. Riders must take part in English lessons and they are also involved in creating their own merchandising, which is sold via the VR46 brand.

A couple of years ago a handful of journalists were invited to spend two days with the academy. We watched the annual 100km dirt track race, visited the merch offices, checked out the Moto2 and Moto3 workshops and left a spectacular bar bill at the hotel.

Most, but not all the riders were present. Those who weren’t there were away in Florence with Aldo Drudi, Rossi’s lifelong friend and graphic designer, visiting the renowned Uffizi art gallery. In other words, Rossi doesn’t just want his apprentices to be great racers, he wants them to be good human beings, with a rounded view of the world.

“The academy and the ranch are like Florence was in Renaissance times for artists and poets,” explained Morbidelli. “This is Florence for riders. Vale is our teacher, he keeps us together, so we give our maximum and develop our natural skills.” 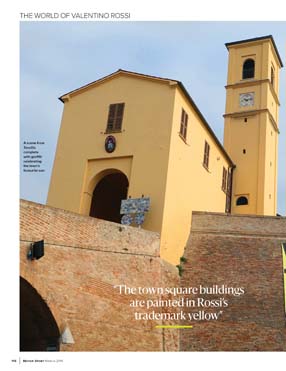 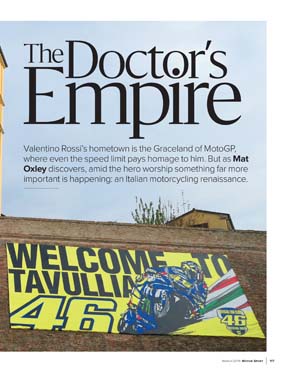 After Sunday’s race Morbidelli heaped more praise on the man who has helped him through the last eight years of his career.

“The key to this result is that the greatest rider ever decided to create an environment that allows youngsters to grow,” he added. “This is why we are seeing so many strong young Italian riders coming through

“Valentino has many facilities where we can work in order to be good riders, good professionals and good athlete. He has made his facilities and his knowhow available to us, which is a really noble act. He’s a friend, but I like to call him my big uncle!”

Bagnaia, who won the 2018 Moto2 title for Sky VR46 and achieved his first MotoGP podium at Misano, also thanked his mentor.

“We work together every day and we push each other every day,” he said on Sunday. “Everything you ask Valentino he always has an answer – this is incredible and I have to say this helped me a lot when I was fighting for the Moto2 championship in 2018. Valentino has created something incredible, but he also uses us to make him stronger, like today and at Jerez, so we are helping each other.” 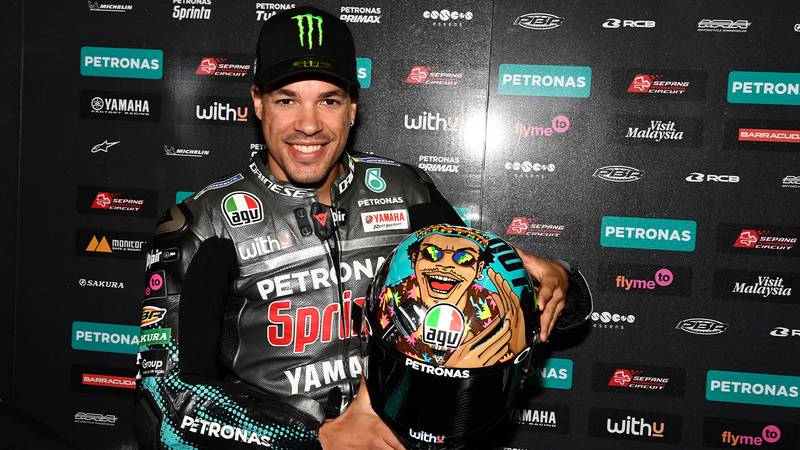 There surely can’t have been a single person in the Misano paddock that wasn’t delighted with Morbidelli’s breakthrough MotoGP victory.

The 25-year-old is one of those motorcycle racers that doesn’t seem like a motorcycle racer. He is so cool, calm and intelligent, so thoughtful, so laidback, so cultured, that he’s certainly not your average MotoGP alpha male.

On Saturday and Sunday at Misano he wore a one-off home-race helmet design – a tradition started by his mentor in the late 1990s – but this was arguably more significant than any of Rossi’s specials.

The helmet was inspired by Do The Right Thing, the 1989 Spike Lee movie that deals with racial tensions in the USA. Morbidelli is of mixed race – Italian father, Brazilian mother – and suffered racist attacks when he was younger, so the current Black Lives Matter movement is close to his heart.

The centrepiece of the helmet design is Do The Right Thing character Senor Love Daddy, a radio DJ played by Samuel L Jackson, who does everything to calm things down, through his words and the music he plays. The rear of the helmet features the word ‘equality’ in numerous languages.

“When I decided to make a special helmet for this event I wanted to deal with a big matter, which is racism,” Morbidelli explained. “But I also wanted to hug 2020 because many not-nice things have happened in the world this year. In MotoGP we try to put on a show to make the audience feel good, so I wanted to treat this topic with some lightness. There’s a Spike Lee movie that treats this matter in a great way, which I recommend to you. In the movie he [Senor Love Daddy] says, ‘Stop all this BS! Stop hating each other!’, so I decided to put myself in his shoes.”