To celebrate the 60th anniversary of its first world-championship race, Honda flew Kunimitsu Takahashi to the Dutch TT. Nineteen-year-old Takahashi joined Honda in late 1959, taking part in the factory’s first Continental campaign in 1960, after its exploratory visit to the Isle of Man TT the previous summer.

But why was this the dawn of modern Grand Prix racing? Because racing was never the same after the Japanese factories arrived in Europe: Honda in 1959, then Yamaha and Suzuki in 1960.

Until then, Grand Prix racing had mostly trundled along at tick-over speed. The MV Agusta four that won the 1959 500cc world title was designed by Piero Remor, the same man who created the Gilera four that won the 1950 crown. When Remor arrived at MV he basically copied his Gilera design. Most of the rest of the 500cc grid was populated by Manx Nortons, which used a single-cylinder engine first raced in the 1930s. In other words, technical development was slow.

That all changed when the Japanese got involved. Within six years Honda’s original 18-horsepower, twin-cylinder 125 had been replaced by a five-cylinder 125 that revved to 21,000rpm and made 250 horsepower per litre, about ten per cent less than a 2019 MotoGP bike. The five’s bore and stroke measured 35.5mm by 25.14mm.

Honda was stunned when they travelled from Japan to Europe, which would be something like travelling from the Earth to Mars now.

The rate of technical development was at its maddest in the teeny-weeny 50cc class. Honda started the 1962 50cc season with a single-cylinder machine that shrieked out 9.5 horsepower at 14,000rpm through a six-speed gearbox. By the end of that same season, the single was replaced by an all-new twin that revved to 18,000rpm through a nine-speed gearbox.

Takahashi remembers all of this, but not as well as he remembers arriving in Europe in 1960.

“At that time we had lost everything due to World War Two, so we started from ground zero, with absolutely nothing in our hands,” the 79-year-old recalls. “Arriving in Europe was a total shock, because everything was different, everything.

“At that time Japan didn’t have paved roads, whereas in Europe the roads were paved and proper race circuits were available, so the level of racing was totally, totally different. It was a huge shock for me.” 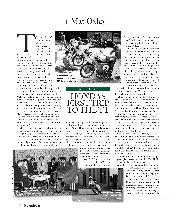 Honda's first trip to the TT

The world of motor sport changed forever half a century ago this June. And yet Honda’s arrival at the 1959 Isle of Man TT wasn’t met with foreboding by the…

Indeed the entire Honda team was stunned by what they found when they travelled from Japan to Europe, which would be something like travelling from the Earth to Mars now.

“We flew into Amsterdam airport and drove on the E10 to Honda’s workshop in Rotterdam,” recalls Michihiko Aika, the mechanic who became one of the main architects of Honda’s 1960s successes. “It was a very beautiful highway but I felt immediately that our job was impossible. I realised the west was much further ahead, the speeds were very different, in Japan it was bumps and dirt and everyone doing 40 to 50km/h [25 to 30mph], in Holland they were moving at 100 to 120 [60 70 75]. It was a big gap.”

Takahashi had only raced on dirt roads in Japan, so his very first race on asphalt was his first Grand Prix, the 1960 West German 250cc race at Solitude, where he finished sixth on a four-cylinder RC161, two minutes behind MV Agusta’s Gary Hocking.

Born in 1940, son of a Tokyo motorcycle dealer who imported Nortons and BSAs into the country, Takahashi made his race debut when he was 19-years-old. He entered the 1959 Asama Plains race – one of Japan’s top events – and won the 350cc class aboard a BSA. Honda signed him soon after that.

“Honda was a new company, no one had heard of them, so no European riders wanted to ride for Honda,” he explains. “That’s why Honda looked for young Japanese riders with potential.

“Everyone did everything. I ground valves, washed bikes and built engines”

“At that time, because I was brave and had a kind of kamikaze spirit, I thought I could win easily in Europe. At my first race at Solitude I was thinking I am Japanese, I am quicker, but then many riders passed me, round the outside. I was very shocked.

“We were destroyed by the skills of the riders and the machine technology. But Soichiro Honda told us: we have to make the best motorcycles in the world! And he never, ever gave up challenging.”

The first decade of Japanese involvement in Grand Prix racing is still considered to be one of the sport’s Golden Ages.

The racing was an almighty clash between the two greatest types of internal combustion engine: the four-stroke and two-stroke. Soichiro Honda hated smoky, dirty two-strokes, so his engineers built four-strokes that revved twice as high as the two-strokes, which produce a power pulse every revolution, instead of every other revolution. The 250 six, 125 five and 50 twin all revved way past 20,000rpm, an incredible number now, let alone in the 1960s. 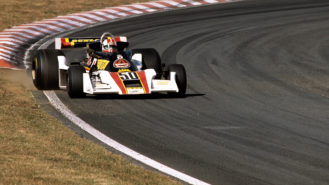 Kunimitsu Takahashi — My only grand prix

1977 Japanese Grand Prix at Fuji  How proud were you in 1961 to become the first Japanese rider to win a world championship motorcycle grand prix? People talk about this…

Inevitably, the two-stroke manufacturers raced down the same road of cylinder multiplication. Yamaha built 125cc and 250cc V4s, while Suzuki built a square-four 250 and a three-cylinder 50, until the rule-makers finally cried: enough! Imagine the concept of Honda’s 50cc twin extrapolated into a 40-cylinder 1000cc MotoGP bike.

In May 1961 Takahashi became the first Japanese to win a Grand Prix, when he won the West German 250cc race on a four-cylinder Honda RC162. When he returned to Tokyo he was greeted by Honda san and Honda vice-president Takeo Fujisawa.

“When they came to greet me at Haneda airport – that’s still in my mind,” he says. “It’s my most memorable moment.”

Takahashi was signed by Honda just like any other factory employee – he clocked in to test race bikes and then he raced them. And all team members multitasked when they went to Europe – there was no room for prima-donnas.

“At that time the team was eight or ten people, with many, many motorcycles to prepare, so everyone did everything. I ground valves, washed bikes and built engines. I really enjoyed working on the bikes.” 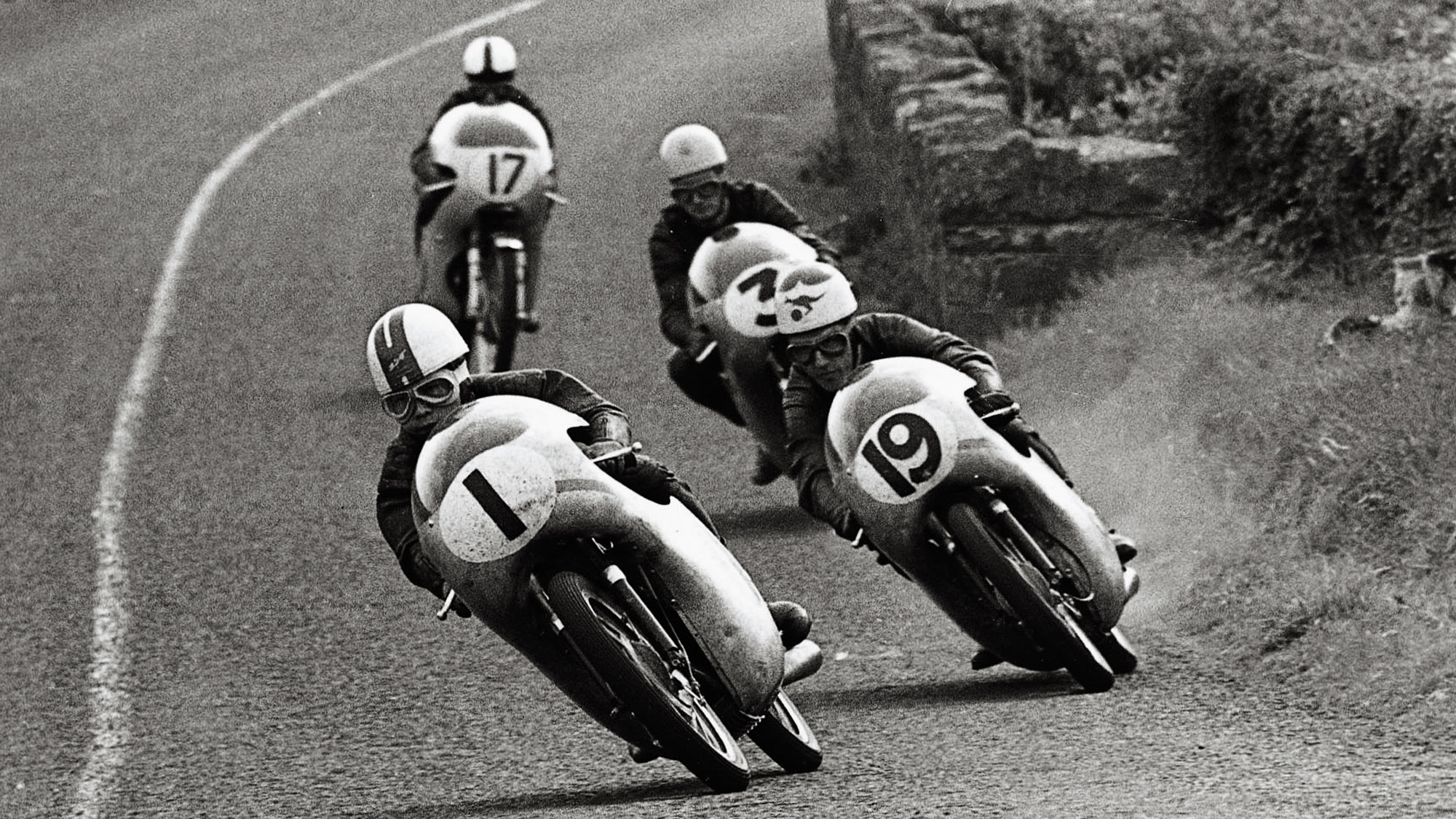 Takahashi won his second Grand Prix at Dundrod in August 1961. In the above photo he leads team-mates Tom Phillis (No19) and Jim Redman (No3), plus MZ’s Ernst Degner (No17) as they attack the circuit’s no-longer-used Leathemstown bridge section.

Takahashi may have become Japan’s first world champion the following year. He won the first two races of the 1962 125cc season to lead the way into the Isle of Man TT, where he crashed heavily, sustaining serious injuries that eventually ended his motorcycle racing career. In fact he was one of the lucky ones. During his brief sojourn in Europe, no less than 14 riders lost their lives at Grand Prix events.

On Sunday at Assen Takahashi climbed into a traditional, sober black leather racing suit (adorned with the letters HSC, for Honda Speed Club, the company’s first collective of speed-crazed youngsters) and set off on a lap of honour aboard an RC142 125cc twin, the bike with which Honda began its world-class adventure at the 1959 TT. 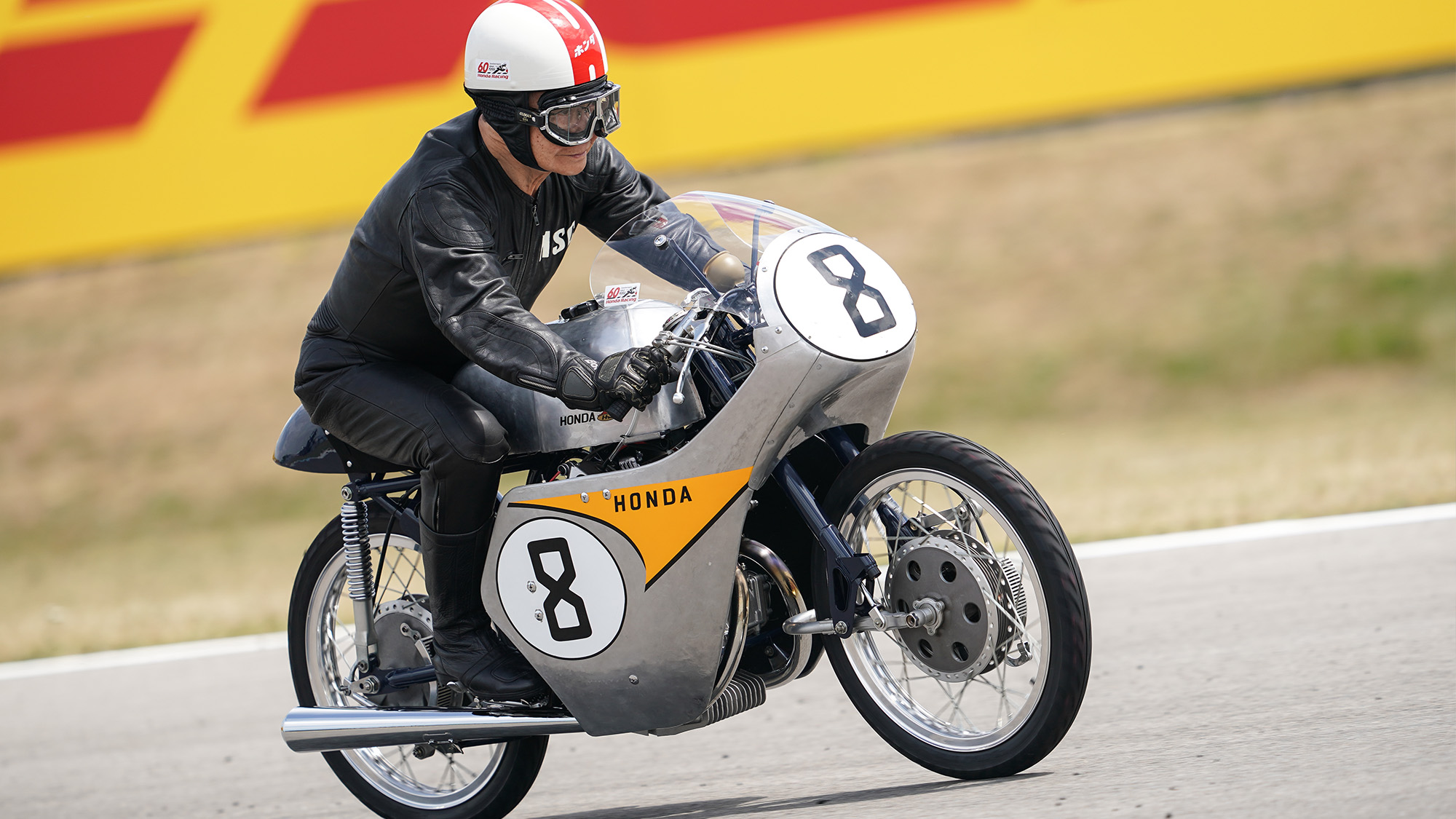 Takahashi and the RC142 at Assen on Sunday

His lap of honour around the modern Assen MotoGP circuit, accompanied by Mick Doohan on a 1989 NSR500, connected those six decades of motorcycle Grand Prix racing: 1959, 1989, 2019.

Takahashi’s lap was a poignant and memorable moment for all kinds of reasons, most especially because this kind of connection won’t be possible forever, just like D-Day veterans walking the beaches they first trod back in 1944.

We should appreciate these moments much more than we already do.