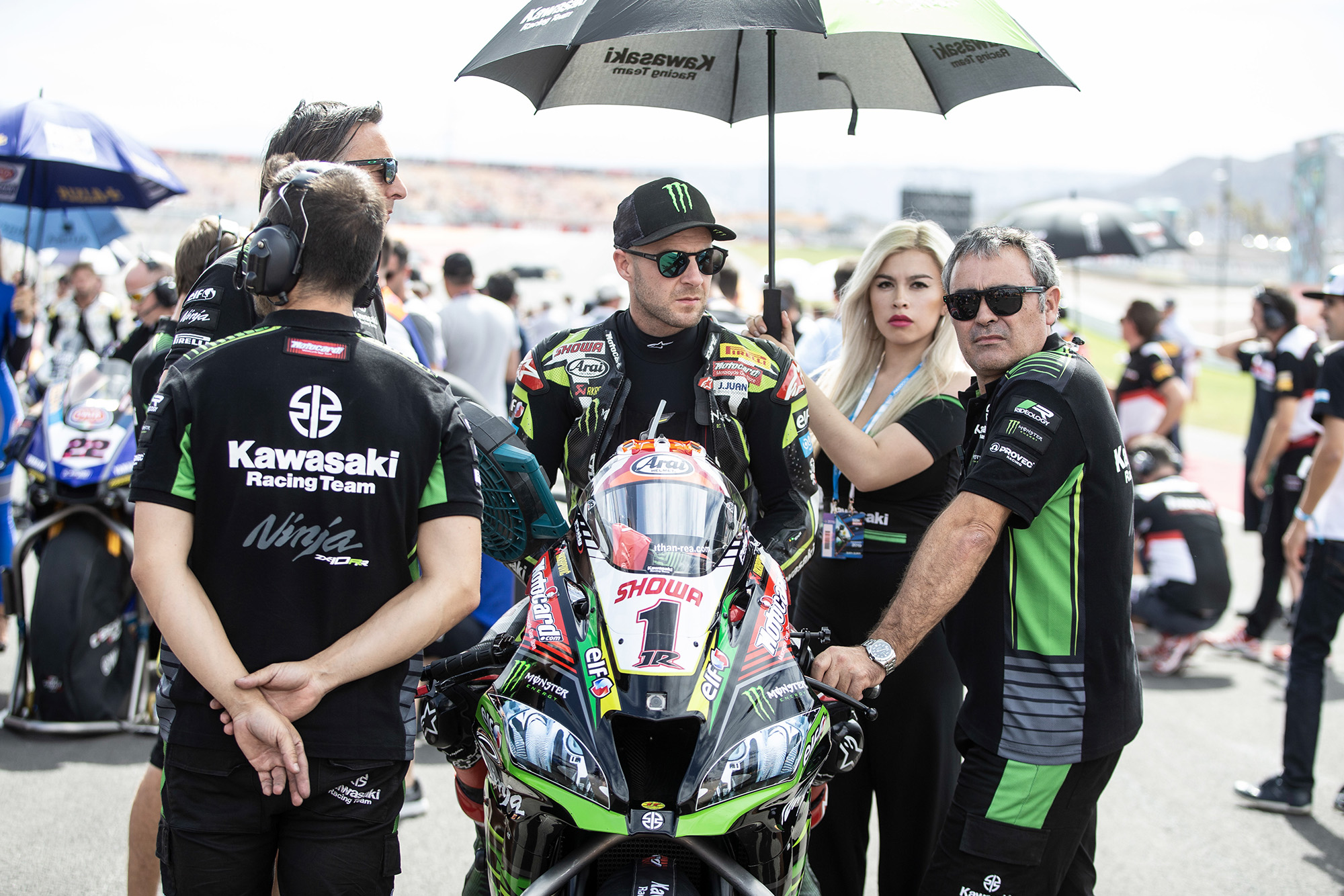 The Royal Automobile Club on London’s Pall Mall is almost certainly the grandest edifice in the world of motor sport.

The vast building – a stone’s throw from Buckingham Palace – is peak British Empire, built in 1911 on the site of the country’s old War Office. Early Isle of Man TT races were organised here, amidst uniformed butlers, silverware and fine brandies.

The club retains its links to royalty – its current president is the Queen’s cousin Prince Michael of Kent – and hasn’t let its standards slip. Even now you’re only allowed in if you’re wearing a jacket, tie and proper shoes. (I know this because once I was escorted out of the tradesmen’s entrance for being incorrectly attired.)

On this occasion I was correctly attired, to talk with World Superbike king Jonathan Rea for a Motor Sport podcast.

“You’ll be on the grid worrying about your bladder, when your mind should be 100 percent focused on visualising the start and the first few laps”

The interview was conducted in a palatial room lined with ancient racing trophies and overlooking St James’s Square, which at one time counted seven dukes and seven earls among its residents. None of this prevented us from lowering the tone.

We – fellow journo Jack Phillips and I – were talking with Rea about the first chapter of his autobiography Dream. Believe. Achieve. He mentioned leaving the grid for a pee, before the race that gave him his 60th WSB win, so this seemed like a good time to ask the question I’ve always wanted to ask of a top rider: how many times do you urinate before a race?

Anyone who has raced will know about the strong urge to empty your bladder before you head to the grid: three, four, five or more visits to the toilet is completely normal. By the fifth visit there’s not much reason to go, except for the fact that you feel like you really, really must go. And even after that you still want to return to the toilet, even when you’re on the grid.

This is an important part of pre-race preparation; even though it’s something you never usually hear about. If you don’t rid yourself of the urge to go then you’ll be on the grid worrying about your bladder, when your mind should be 100 percent focused on visualising the start and the first few laps. The urge to pee can destroy the sense of calm you need at this moment of maximum stress. And if you get your bladder strategy very wrong there’s only one answer: to pee when you’re on the bike, maybe while you’re racing.

“I go so many times, honestly, it’s absolutely nuts!” says Rea. “I pee before I get changed, which is ten minutes before pit lane opens, which is 20 minutes before the race, so half an hour before the race I’ll pee, get changed, have another little dribble, then go to the garage. Then I’ll normally leave the garage and go out the back and have another pee. It’s not glamorous, right?! But sometimes the toilets are so far away that you have a pee bottle. So I’ll have my pee bottle with me the whole time, or my assistant Kev [Havenhand] will have the bottle. It’s not the best job in the world!

“Sometimes it’s fine on the grid, but the last thing I want to be thinking on the grid is, I need a pee. So if I do need a pee I get straight off the grid, because I don’t want it to be a factor in my brain. So you could say I pee five or six times before a race. It’s weird, isn’t it? All those normal practice days and you don’t think of the toilet that often, but when your adrenaline is pumping…” 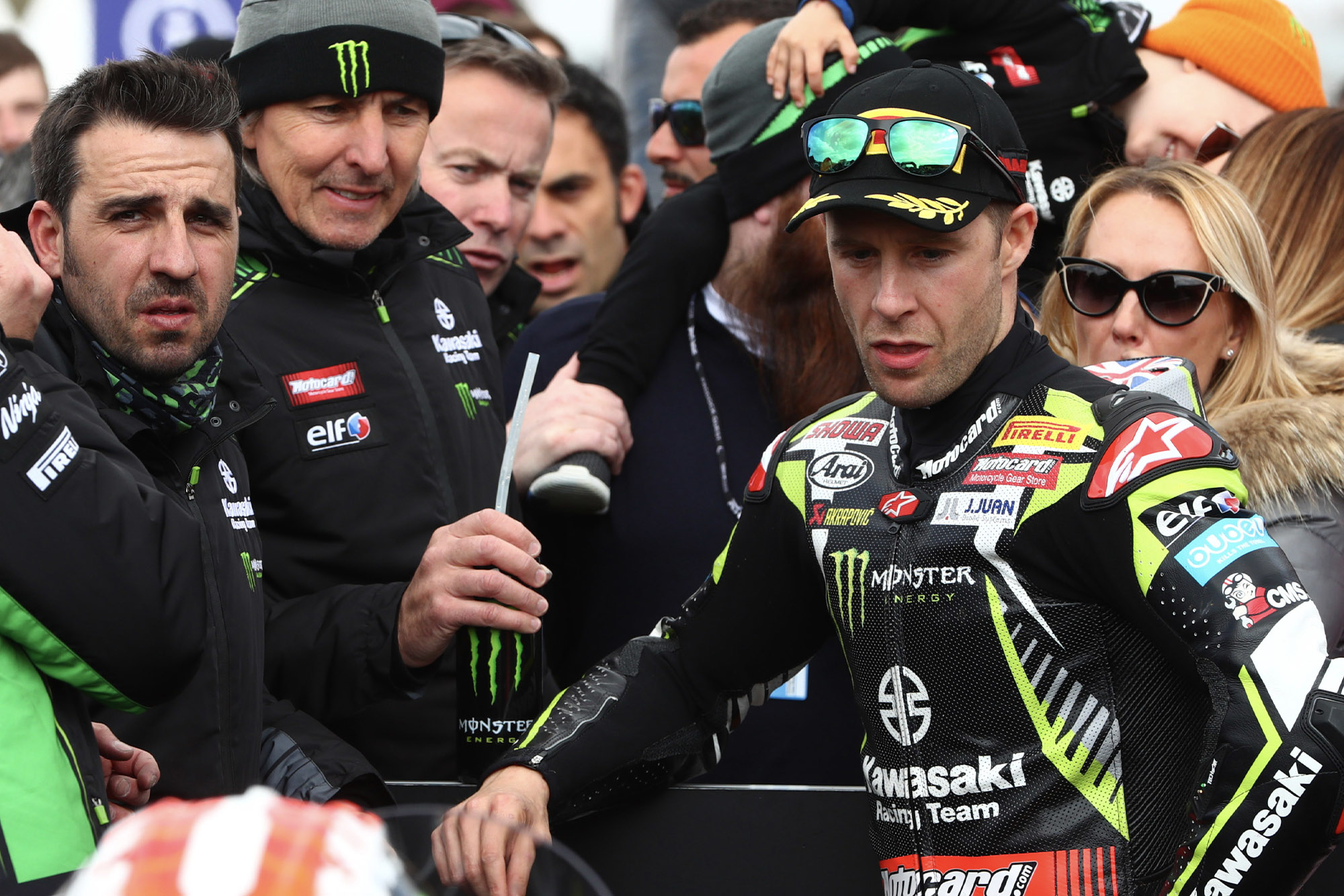 Very occasionally his bladder strategy doesn’t go to plan, like at the British WSB round at Donington Park in May 2017.

“Do you want me to tell you a really funny story? I hadn’t gone to pee enough. I was sat on the grid and I was absolutely bursting, so I started to go in my leathers; so much so that it dripped down and there was a small puddle under my bike. They showed the three-minute board, when you have to unplug your tyre warmers, and my chief mechanic Uri [Pallarès] spotted the puddle. He gently tapped my other chassis mechanic: what’s that? He was thinking it’s water or oil, or something else from the bike.”

Rea now mimes Pallarès testing the fluid, by dipping his finger and tasting it.

“Poor old Uri dip-tested it! I won the race, and in parc fermé Uri asked me, ‘you peed on the grid, didn’t you?’, and slapped me! I said, ‘yeah, sorry mate’. It was the first and only time I’ve done that.”

In the old days, riders whose bladder strategy had gone awry used to climb off their bikes on the grid and relieve themselves against the trackside barriers, in full view of the fans and TV cameras. Inevitably, such behaviour is no longer tolerated. Rea did this on several occasions and was told that if he does it again he will be fined 5000 Euros.

“I don’t think the sponsors were very happy with us going to the toilet on their banners, which I completely understand. I keep asking about this in the safety commission. In world motocross they have portaloos that the riders can use. In World Superbike,  depending on where’s your start position, the toilets can be 200 metres away, so they’re really hard to get to.”

* This chat with Rea was the clear winner when I was choosing my favourite interview of 2019. Then I realised that, in fact, our interview at the Royal Automobile Club had taken place in October 2018. I hope you grant me poetic licence and let me get away with bending time.