Slick tyres have no tread, so they don’t grip the road when it’s raining, right?

Wrong. Totally bald slick tyres can grip incredibly well in the rain, so that you’re riding around, wondering, how can this be?

Corner by corner, the tyres are losing temperature – a degree here, a degree there – until they reach the critical point. Most teams reckon that point is 40 degrees Celsius for the front tyre; while the rear doesn’t matter so much because any good racer can ride a motorcycle with pretty much zero grip.

Below 40C the front ceases to grip the rider is suddenly riding on ice.

In these circumstances the line is so slim it’s invisible. And if you can’t see it, how do you avoid tripping over it?

If you’ve ever ridden a motorcycle in snow or ice you will know what it’s like. If you even think about touching the front brake the front tyre will lock and you’ll be on your arse.

Not only that, MotoGP’s carbon brakes are also largely useless when they’re too cool. Normal temperature during a race is around 450C, rising to 800C or 900C during heavy braking, but once they dip far below 250C they don’t really work.

So during the last few laps of Sunday’s Austrian Grand Prix, Brad Binder was riding around with no grip and no brakes.

This is the situation in which the 26-year-old South African found himself, when the rain clouds came tumbling over the Styrian hills and soaked the track.

MotoGP riders walk the line every time they go out on track but in these circumstances the line is so slim it’s invisible. And if you can’t see it, how do you avoid tripping over it?

Binder struggled during the early stages on the dry track, fighting his way through from ninth on lap one to sixth, with eight of 28 laps to go, the lead group still four seconds in front. Far too far, on a normal day.

But this wasn’t a normal day. Rain started falling here and there, slowing the leaders by a couple of seconds. Binder had the advantage of seeing how the five men in front were coping, so from 5.9sec behind leader Pecco Bagnaia on lap 21 he was just 1.1sec behind at the end of lap 24, right behind Bagnaia, Marc Márquez, Fabio Quartararo, Jorge Martin and Joan Mir.

One lap later – as the rainfall intensified – the first five riders peeled into the pits to swap to their spare bikes fitted with rain tyres.

Riding into pit lane, swapping bikes and riding out of pit lane takes about 37 seconds at Red Bull Ring, a number that riders know, because they must factor that into any decision they make to change tyres. They all knew that the chance of making up those 37 seconds in the last three laps was just about impossible.

They also knew that staying upright on slicks was just about impossible, so rain tyres was the only sensible choice.

Binder, at the back of that group, had a split second to make up his mind: twist or stick?

He knew that if he stuck he would’ve raced the leaders on rain tyres, with no advantage or disadvantage. If he twisted, who knows what would happen? It could be the best or the worst, but his race had been so disappointing up to that point that he decided to risk it all.

As the late, great Ralf Waldmann opined after winning wet/dry 250cc British GP in 2000, following an apparently idiotic tyre choice, “The difference between idiot and hero is very small.” 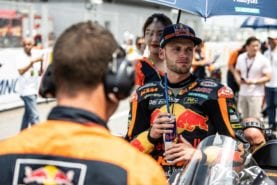 Not many riders get to be factory riders in their rookie MotoGP season. Usually this only happens to the greats, like Marc Márquez and Maverick Viñales. This year 2016 Moto3 world champion and…

Binder’s last dry lap was a 1min 25sec. His first wet lap, when he took the lead while the leaders were in pit lane, was a 1min 32.7sec.

During those last two laps he was as surprised as anyone that he didn’t crash. Can you imagine if he had fallen? “Idiot!” everyone would’ve cried. Instead, as he crossed the line, exalting at his survival, everyone hailed him as the hero of the day.

“I was having a horrendous race, but I got a bit more excited when it started to spit with rain,” said Binder after his first victory and first podium since his debut MotoGP win at Brno last August. “That’s when I saw my opportunity to really catch up.

“Just to stay on the track the last lap was virtually impossible. I thought it was finished a couple of times”

“As I saw the people stacking into pit lane I knew it was my chance to take a gamble. It was a really good decision for the next half lap because I could still ride really fast in the first sector and the second sector, more or less. Then I got to Turn Five and it was soaking wet.

“When the tyres were hot and the brakes were hot it was quite okay. You could manage it and it was safe. But as soon as they cooled off it was a long two laps. I remember my brother [Darryn] telling me he was impressed about how much grip there is in the wet here on slicks [when the younger Binder had used slicks in the previous Sunday’s damp Moto3 race], so I think that had something to do with my decision.

“I just tried to make sure I stopped, got around the corner, and just went flat out up the straight. Just to stay on the track the last lap was virtually impossible. Actually I thought it was finished a couple times because in Turn Three I wasn’t stopping and the only thing that was working a little bit was my rear brake. So I was pushing my rear brake and the thing was sideways and touched the steering lock and I went straight a little bit. But I would have happily crashed.

“When I came across the line with one lap to go I saw ‘plus nine’ on my board. But is that plus nine on someone on wets or someone on slicks? Because if it was someone on wets, they would’ve caught me.

“This wasn’t racing – this was surviving. I was just trying to finish the race. I wasn’t trying to go fast.”

The rider nine seconds behind Binder with one lap to go was indeed on slick tyres – Aleix Espargaró was another who had decided to roll the dice and try to survive on slicks.

Just as well, because the fastest man on rain tyres was Bagnaia. All the riders who had swapped tyres found the first couple of laps very treacherous – which is why Marc Márquez fell at the start of his first flying lap on rain tyres and others nearly joined him.

Even Bagnaia went backwards initially. At the end of his first flying lap on rain tyres he had dropped to 11th, 32 seconds behind Binder, with two laps remaining! On the penultimate lap he was still only tenth, 27 seconds down.

And then his rain tyres started working as the rain poured down and his slick-shod rivals teetered on the brink.

On the final lap Bagnaia passed Danilo Petrucci, Takaaki Nakagami, Alex Márquez, Valentino Rossi, Luca Marini and Espargaró, all of them sitting ducks on slicks. On the same lap he also took Pol Espargaró, who had changed tyres at the end of the penultimate lap.

“I don’t know why, but the first two laps with rain tyres were more slippery than with slicks during braking,” explained Bagnaia after equalling his best MotoGP result. “I just tried to warm up the tyres and on the last lap I overtook eight riders. I enjoyed it a lot, but Brad was already gone.

“I was angry when I started the last lap because I saw P10. Then I saw that far, far away there was a group, but I was not thinking it was so many riders. When I arrived with them I overtook Taka braking for Turn Four and the others from Turn Six to Turn Eight, so, it was nice.

“Then nobody was in front. I wasn’t thinking I’d be on the podium, because I had counted just six riders, so I was thinking I’d finished P4. Then I looked at the big television screen and saw I was second, so I was a bit happier. But the first feeling was that I was angry at the start of the lap.”

That last lap must’ve been like playing a video game for Bagnaia, or like riding in the beginner group at a track day, because his 1min 35.9sec final lap was almost 15 seconds faster than Binder’s and 16 seconds better than Lecuona’s, his final victim.

Just behind Bagnaia came Martin and Mir, who also carved through the helpless slick-equipped riders in the last lap or two.

“When I started the last lap I was P11,” said Martin, winner of the previous Sunday’s Styrian GP. “I should be with slicks, I thought! Then as soon as I did corner one I saw all the riders in corner three and I said to myself, come on, it’s time to push, do your best! I arrived with the group in corner seven and I passed six or seven riders in two corners – it was a bit difficult to avoid all of them!”

To add the chaos and the feeling that anything might happen, Valentino Rossi was third with two laps to go, a 200th MotoGP podium so near but so far. He took the chequered flag in eighth, passed by Quartararo in the final run to the line.

Rossi, like pretty much everyone else, had revelled in the mayhem.

“The crossing point between the guys that remained with slicks and the guys that changed for rain tyres arrived at the last three corners, so it was very exciting,” said the 42-year-old, like he was talking after his first MotoGP race, not his 365th. “And at one point I was on the podium so it was quite exciting.”

Amidst the madness the battle for the 2021 championship was almost forgotten. But Quartararo’s ride – especially in the dry – had been stunning. Most people expected his Yamaha YZR-M1 to struggle at Red Bull Ring, as usual, but in fact he arrived there with a 34-point lead and left with 47-point advantage.

“That was the first time this year I thought about the championship,” he said. “I didn’t want to make a stupid crash and I nearly had one when Marc crashed.”

Silverstone next and who knows what will happen?