KTM was MotoGP’s biggest improver last year – the factory scored its first-ever MotoGP victory at Brno in August and by the end of the season had won as many dry-weather races as Ducati, Honda and Suzuki combined. That’s a mighty achievement for a company that entered the premier class only four years earlier.

Those successes – victories at Brno, Red Bull Ring and Portimao, plus further podiums at Misano, Le Mans and Valencia – were the result of a bike that had improved in all areas, although most of all in chassis performance, thanks to an all-new steel beam frame which replaced the RC16’s original steel trellis.

Improvements to the frame’s longitudinal stiffness (more) and lateral stiffness (less) have made the RC16 much more rider-friendly and will be a key factor in the battle for the 2021 title.

“Generally the bike is much easier to ride and much more versatile to ride than it was before,” says RC16 project leader Sebastian Risse. “Before 2020 it was a one-line bike – you had to brake really hard to get it working and use quite extreme v-style cornering lines. Some riders could do this – especially Pol [Espargaró] – but the others struggled a lot.

“Now riders that want to be strong in corner entry by braking late and killing their mid-corner speed to prepare the exit or by carrying speed into and through the corner can use the bike to gain an advantage.”

The RC16’s performance in the braking zone has been part of its character since the machine contested its first race in March 2017. How did KTM achieve this? Obviously Risse won’t tell us, but it’s likely a combination of geometry, centre of mass, chassis stiffness and so on.

“When Pol and Bradley [Smith] first raced the KTM they told us that compared to what they were used to [Yamaha’s YZR-M1] that our bike’s braking was its strong point,” Risse continues.

“And once you give something good to a rider he doesn’t want to give it away, especially when it’s something that allows him to attack. Even though our bike had weak points at that time the front end allowed our riders to attack other guys and also to block them, which helped a lot when they were fighting.

“So this strong point becomes the character of the bike because you build your bike around it. You change other things, but the riders always want to keep the strong point so that part of its character becomes stronger.”

What’s really important about the RC16 allowing riders to use either a point-and-squirt technique or fast, flowing corner speed is that it gives them two ways to attack corners, depending on the corner, what bike and rider they’re racing against and so on.

Somehow KTM has also managed to make the bike work with Michelin’s latest rear tyre. These are two aspects of performance that both Ducati and Honda are still trying to achieve with their V4s, so they need to look closely at the KTM and work out what they need to do to make the Desmosedici and RC213V more versatile and rider-friendly. 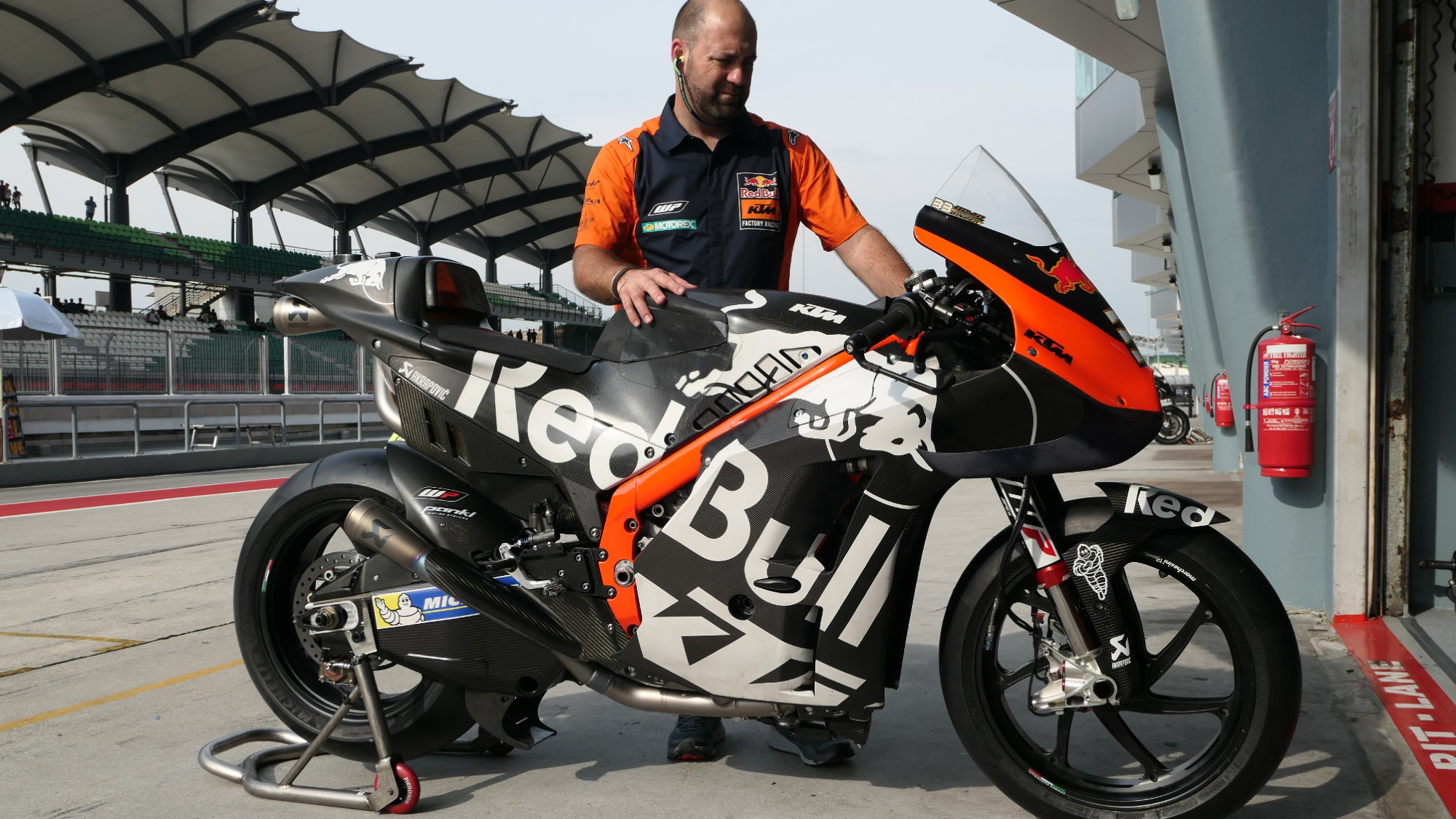 KTM’s new concept frame is still in its infancy, so (in theory at least) there should be plenty of room for further improvements in 2021 and beyond.

The RC16’s slightly oval beam sections may look simple but of course they’re not. Just like the aluminium frames used by KTM’s rivals, what you see on the outside is very different from what’s on the inside.

“The design develops more and more and the more you know your targets, not just in term of global stiffness but also in terms of local stiffness, then the more complex the parts become,” says Risse. “Your cross-section may be the same everywhere but you can tailor the thickness of the tubing to meet your targets.”

Straight-line speed has never been a problem for the RC16. The engine’s V4 configuration makes it naturally more powerful than the inline-fours. Last year the bike was just 3.5mph slower than Ducati’s Desmosedici at the fastest tracks and only 1.4mph down on Honda’s RC213V.

But Risse insists that outright horsepower isn’t the most crucial factor in straight-line speed, because every bike on the MotoGP grid has more horsepower than it can use until it reaches fifth or sixth gear.

“To make the lap time you don’t need all the horsepower,” says Risse, who worked with KTM riders in the German superbike series before moving into Moto3 and then MotoGP. “What the riders describe when they are talking about the acceleration phase is the engine feeling, not the outright power, because usually we can give them more power.

But Risse believes the biggest determinant in the initial acceleration phase isn’t the engine or electronics, but the rider.

“When we really look into the details the biggest factor is how the rider prepares the line and the moment he picks up the bike – that’s what makes you strong on the exit.” 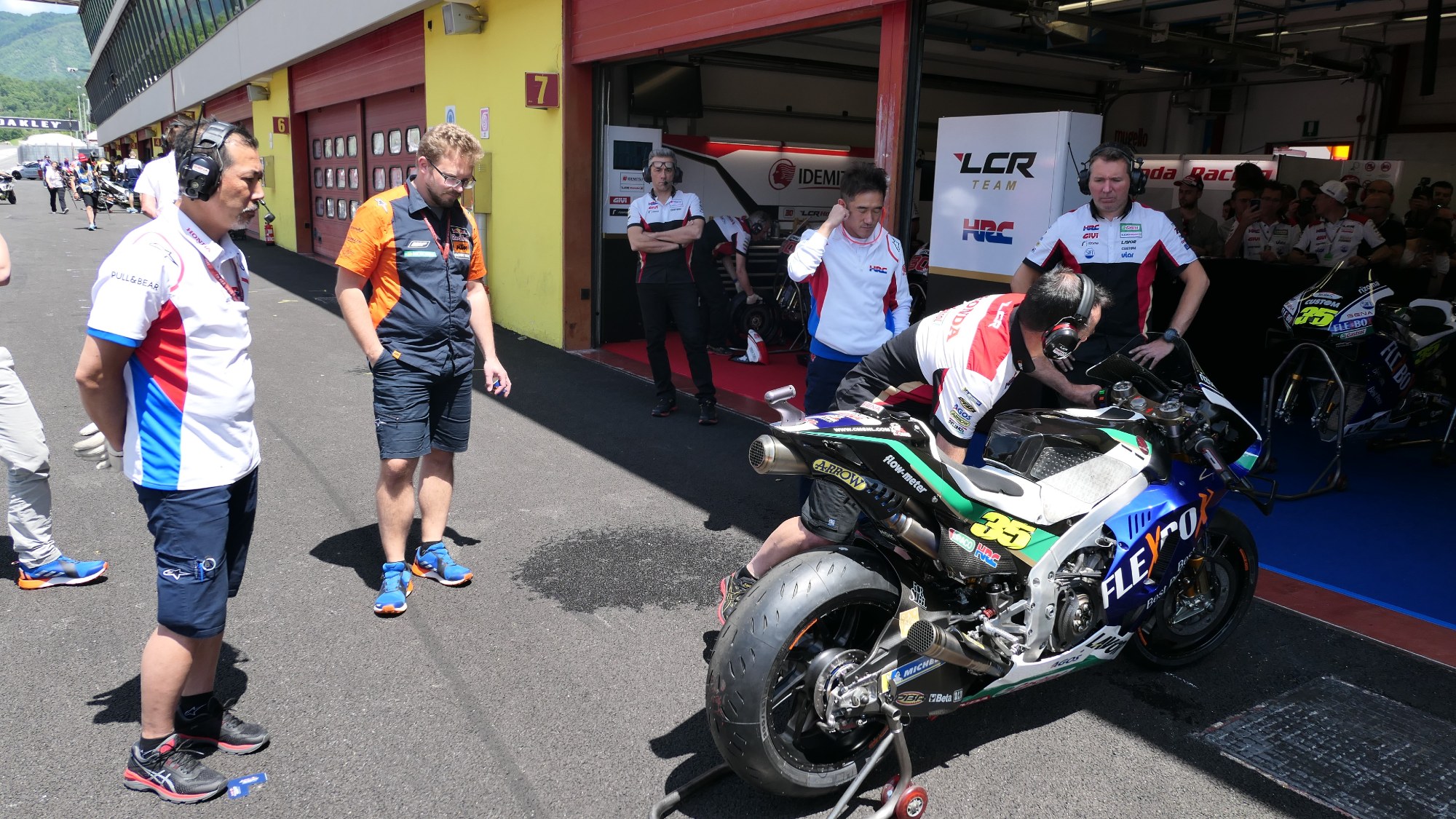 “The Michelins have a certain working window and they work really well in that window and there’s normally enough different tyre specs available to cover quite a wide range, so usually it’s not a problem to find tyres that work,” Risse adds. “What does make it tricky is when only one tyre spec works, so you have to manage the whole weekend with that spec, so the rider will have to spend quite a lot of time on the tyres that aren’t working so well and still try to get the best out of the bike in terms of doing set-up work and getting ready for the race.

“The situation is always different according to the tyre allocation. I think people can see this from the outside, but the more we look into the details the less clear this pattern is!”

Espargaró, who joins Repsol Honda this year, has a clear idea of what KTM must do to challenge for the 2021 MotoGP title.

“Consistency from one track to the next was very difficult to have with the bike, because the bike was super-sensitive to temperature changes,” says the 29-year-old Spaniard who scored five podiums last year, but never won a race, unlike fellow RC16 riders Brad Binder and Miguel Oliveira.

“When everyone used Bridgestones the operating range was bigger, but when the Michelins match the track and the bike they work much better than the Bridgestones did.

“Last year’s Barcelona race is a great example of the KTM’s super-sensitivity to temperature. On Saturday it was sunny and we used the medium front in FP4 and it worked really well. Then the race was cloudy and we had trouble. When you are dealing with a small window then small temperature changes can completely change your race.”

The RC16’s need for a particular front tyre is the big issue that KTM needs to fix for 2021. Like Honda’s RC213V the bike needs a harder compound front, which can be a problem when the tyre allocation doesn’t fall in its favour.

Oliveira is surely the company’s biggest hope for the 2021 title. Last year the 26-year-old Portuguese won two races – Styria and Portugal – but didn’t even make the top four in the other 12. However, 2021 is his third year as a MotoGP rider, so he should have the experience to put together a strong season, if the RC16 is more consistent from one track to the next. Oliveira is a real thinker – he’s the new Andrea Dovizioso – but he’s got a better bike than a Ducati.