Suzuki and Yamaha have struggled to keep up with Ducati and Honda in recent years, so what are their chances for 2019? 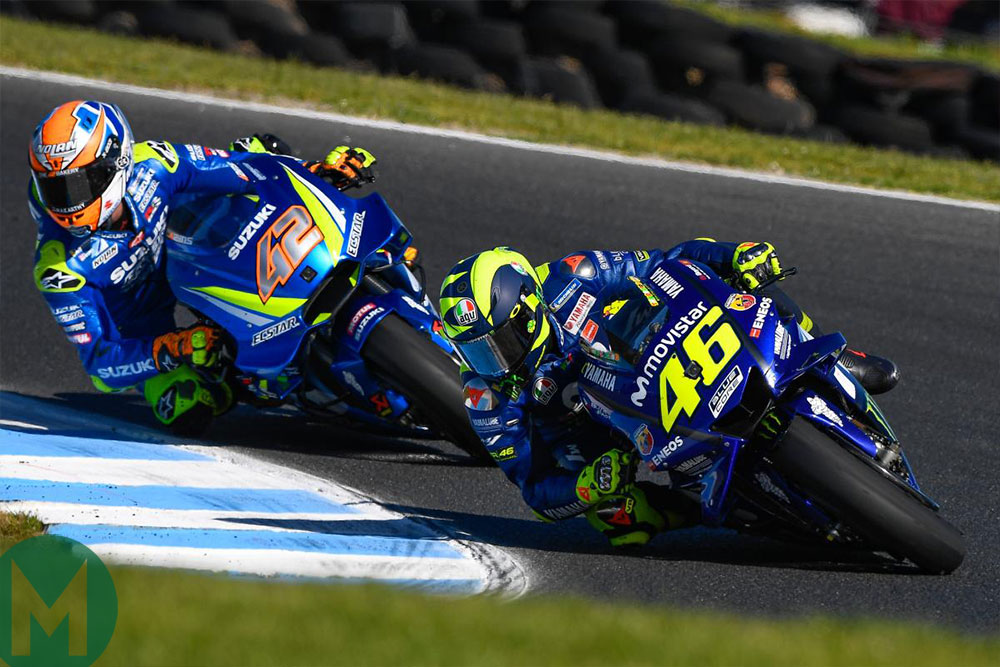 Inline-four MotoGP bikes have won two of the last 30 MotoGP races. That’s why some outsiders predict the end of the line for them.

But if you’ve been paying attention you will know that Ducati’s V4 and Honda’s V4 dominate MotoGP for reasons other than engine configuration. Both layouts have their good and bad points; end of story.

First, a little bit of history about the inline-four…

The first inline-four motorcycle engines were mounted longitudinally, which demanded a ridiculously long wheelbase and caused the rear cylinders to overheat.

The first transverse-mounted inline-four was created in 1923 by Italian engineering graduates Carlo Gianini and Piero Remor. Even that engine – a short-stroke, bevel-driven overhead-cam 490cc four – was quite something. It made 28 horsepower, which was more than three times the output of BMW’s seminal R32 twin, launched the same year. The so-called OPRA (for Officine di Precisione Romana Automobilistiche) was bankrolled by a minor Italian royal: Prince Lancelloti.

Remor later designed the Gilera four, which won six 500cc world titles in the 1950s, and the MV Agusta four, which won 10 500cc crowns over the next decade and a half. These machines inspired the mass-produced inline-four streetbikes that have dominated the motorcycle market for decades, all the way from Honda’s CB750 of 1969 to today’s BMW S1000RR, Honda Fireblade, Kawasaki ZX-10R, MV F4, Suzuki GSX-R1000, Yamaha YZF-R1 and so on.

In other words, motorcycling has a lot invested in the inline-four engine; so what do Suzuki and Yamaha have planned to get the GSX-RR and YZR-M1 back to the front of MotoGP? 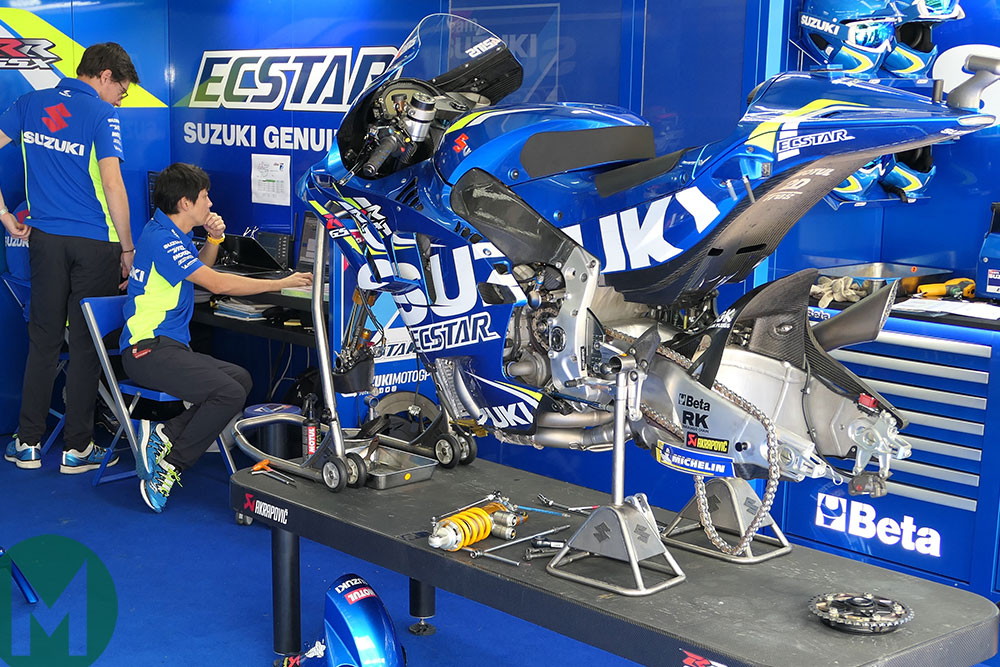 Suzuki is getting there. MotoGP’s smallest Japanese operation ended last season with four consecutive podiums, the first time it’s managed that since the days of Kevin Schwantz, way back in 1994, a quarter of a century ago!

Suzuki bosses haven’t made life easy for its engineers, by waving the white flag with the GSV-R V4 at the end of 2011 and sitting out the next three seasons. The company returned in 2015 with the much-improved GSX-RR inline-four which could immediately do things that other MotoGP bikes couldn’t. During the 2015 season, Suzuki rider Aleix Espargaró said the GSX-RR “steers like a 250”, which is the ultimate compliment for any race bike.

Maverick Viñales won Suzuki’s first dry-weather MotoGP victory at Silverstone in 2016, suggesting the factory was getting close to competing for the title. But then Suzuki took a backward step in 2017 – engineers increased crankshaft inertia, which made the bike difficult to manage on corner entry.

Last year Suzuki got just about everything right. Álex Rins and Andrea Iannone scored nine podiums from 18 races, Rins finishing Sepang in second place, less than two seconds behind Marc Márquez. No wonder that Márquez believes Rins could challenge for the title in 2019.

The GSX-RR’s only real handicap last season was horsepower, even though the bike halved its previous top-speed deficit, from 6.6mph/10.4kph in 2017 to 3.3mph/5.4kph in 2018. Rins believes he will be even closer this year, thanks to a new engine that felt stronger, especially in the higher gears, during postseason tests last November.

Suzuki’s other focus for 2019 will be fine-tuning chassis performance, which is already impressive. Espargaró, who now rides for Aprilia, says the GSX-RR “is so unbelievably good when they release the brake, it’s crazy!”.

The GSX-RR looks like it handles well even when it’s stood still. it’s the smallest, neatest bike on the grid. Two years ago Suzuki started working with aluminium/carbon-fibre composite frames, which first appeared at a MotoGP race halfway through last season. Rins and Iannone used these frames from Austria onwards.

“When you are making adjustments it’s easier to be accurate with geometry and stiffness with carbon-fibre,” explains Suzuki’s MotoGP technical Ken Kawauchi. “You can adapt the frame by welding, but this can be bad for the dimensions and so on.”

However, Rins and new team-mate Joan Mir may start the new season with all-aluminium frames, because Kawauchi sees less need for a composite frame now that he has finalised ideal (for now) geometry and stiffness.

Rins really likes the chassis, which allows him to turn faster and therefore get on the gas quicker, which is a good way of compensating for a slight handicap in horsepower.

“Our advantages are turning and corner speed, plus good traction on the gas and good acceleration from low rpm,” he says. “Good traction is always important, especially over a race distance because if you have traction then tyre life is better, because you don’t get too much wheelspin, so you don’t destroy the tyres.”

Suzuki has also spent a lot of time improving braking stability. “This is so important because now you need to really stop the bike before you turn into the corner,” adds Rins. “But we are trying to improve the whole bike, because to race at the front you need a complete bike.”

There is one handicap that Suzuki has yet to deal with. As always, the factory goes racing with only two riders. At a time when data is more valuable than ever, that’s half as good as having four riders racing.

Even Schwantz complained that having only one other Suzuki on the grid hurt his chances of beating the Hondas and Yamahas. If Suzuki really wants to win the MotoGP title the factory should dig a little deeper and lease bikes to an independent team, which could use the slot freed up by the exit of Marc VDS. 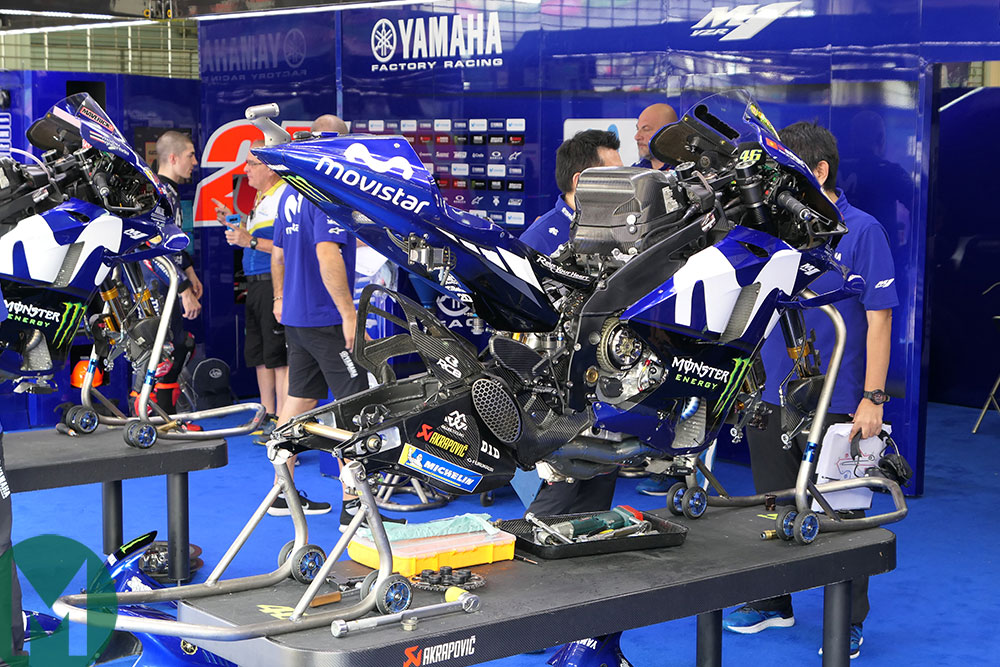 Can Yamaha dig itself out of its hole?

Last season was mostly a nightmare for Yamaha. The factory-made history with its longest losing streak since it first entered the premier class in 1973. The problem was simple: Yamaha hasn’t adapted to MotoGP’s new electronics and tyres as well as Ducati and Honda.

The change to Michelin helped Ducati most and hurt Yamaha most. While the Desmosedici doesn’t need a lot of lean angle to get through corners quickly, the M1 has always relied on lean angle. Most people don’t realise this is one reason why Ducati started winning again in 2016, after five years without a win on Bridgestones.

“Our negative point is that our bike needs more lean angle to make the corner,” says Yamaha motorsport manager Kouichi Tsuji. “So we use the edge of the tyre more, so edge grip drops down and the bike doesn’t do what we want it to do.

“In 2017 and 2018 we tried many things, many kinds of frame stiffness, different centres of gravity and so on, but still we couldn’t find the correct number point to suit the Michelin tyres. If we could find something specific then we could fix it!

“But we don’t know exactly what the problem is – maybe engine character, maybe electronics, maybe chassis stiffness. I think it’s something from here and something from there.”

Valentino Rossi and Maverick Viñales spent most of Yamaha’s time in the doldrums blaming the electronics, rather than chassis design or engine character, but finally towards the end of last season they realised that the engine was a prime suspect.

“Electronics are only part of the problem,” adds Tsuji. “Because you cannot create extra grip from electronics – what we need is more mechanical grip.

Viñales was impressed, because he prefers more engine braking. “I now feel better with the engine-braking,” says the Spaniard. “I’m concentrating a lot on corner entry, because when we lose grip there, that is where we have been losing time.”

Rossi was less impressed: “Yamaha is trying to give us a softer engine character so we have less spin, but still we suffer too much with rear-tyre degradation.”

Yamaha wanted to finalise its 2019 engine after the November tests, but Rossi hopes to have another spec to test at Sepang in early February.

Yamaha also has a new chassis for 2019, but it’s far too early to know if this will solve the M1’s grip and tyre wear problems. Yamaha has always built corner-speed bikes, so it’s unlikely that the 2019 M1 will be a stop-and-go machine, so the factory’s chassis engineers will have to find another way around their lean-angle/tyre-life worries.

Although we now know that electronics aren’t the only problem at Yamaha, the factory definitely needs to catch up in this area. When I asked Tsuji if he could follow the lead of Ducati and Honda by hiring Magneti Marelli staff, he laughed.

“If you know a good electronics engineer from Ducati or Magneti Marelli, please introduce us!” he said. “But Ducati, for example, always lock their contracts with their engineers. This is why Lin [Jarvis, Yamaha Racing managing director] is still trying to find someone.”

Somehow Yamaha needs to work out how to get the best out of the Michelins. A small improvement in all three main performance factors – engine, chassis and electronics – should close the admittedly small gap to Ducati and Honda.

However, on the final day of testing last November, Rossi said the M1 was still a fifth, sixth, or seventh-place bike.

Hard to believe that Yamaha could have another miserable season, but it’s not impossible…

MotoGP’s new-wave riding techniques: ‘They move on the bikes with an incredible intensity’

Incredible but true, Fabio Quartararo is the first MotoGP champion since Giacomo Agostini who didn’t work his way to the top by riding two-strokes. True, Quartararo rode two-stroke minibikes, but…

2021 was the year of a new MotoGP generation, as Valentino Rossi retired; Pecco Bagnaia and Joan Mir finished behind the 22-year-old champion Fabio Quartararo; and Ducati ended the season…