Yamaha won its last MotoGP championship in 2015. It’s no coincidence that 2015 was the last year of Bridgestone tyres, because since then Yamaha engineers have been unable to make the YZR-M1 work consistently with MotoGP’s current tyres, made by Michelin.

Yamaha’s problem is as simple as that, although fixing the problem is anything but simple.

Spec-tyre racing requires engineers to build their bikes around the tyres, rather than the other way around, which was how it worked before spec tyres took over most major motorsport championships.

Michelin’s MotoGP tyres famously work across a narrow temperature range, so what Yamaha needs to do is build a bike that generates the correct temperature in the tyres, regardless of the track and conditions.

In recent years the M1 has done just that now and again – when it’s got grip the bike can exploit its corner-speed potential – but not consistently enough to win the championship. And that’s despite having Jorge Lorenzo, Valentino Rossi, Maverick Viñales, Fabio Quartararo and Franco Morbidelli on board.

And yet last year was Yamaha’s best since the Bridgestone era, with seven race victories.

Does this suggest that the factory is inching towards fixing its problems? Not really, because three of those victories were achieved by Morbidelli, riding a 2019 M1, while the 2020 bike seemed to have much more erratic performance.

The three riders who will be equipped with 2021 M1s this year – Quartararo, Viñales and Rossi – all agree that the biggest problem that needs to be fixed is inconsistency from one track to another.

“It looks like we don’t understand something about the tyres – it’s incredible that Yamaha wins one weekend but the next weekend we struggle very, very much with grip,” says Rossi.

“Our bike is all or nothing – we need to find something in the middle where we can fight for great results every race,” says Quartararo.

“When we have grip it’s difficult to beat us but when there’s no grip we struggle more than our competitors,” says Viñales.

So what does Yamaha need to do? Number one: make the 2021 M1 less sensitive to changing conditions. But how do you do that? This is a much hazier aspect of performance than things like increasing engine power or braking performance, which is why Yamaha have yet to crack this particular code. Basically it requires everything to work together just right: engine, electronics, chassis stiffness, geometry and everything else.

Perhaps the easiest way out of this hole would be to build replicas of its 2019 bike, which made Morbidelli a much more frequent visitor to the podium than Quartararo, Viñales and Rossi.

But the rulebook doesn’t allow that, due to emergency changes made to reduce costs in the wake of the Covid-19 pandemic. During 2021 riders must use their 2020 engine specs. The problem for Yamaha is that the 2019 and 2020 chassis use different engine mounts, so its 2020 engines don’t fit the 2019 chassis. 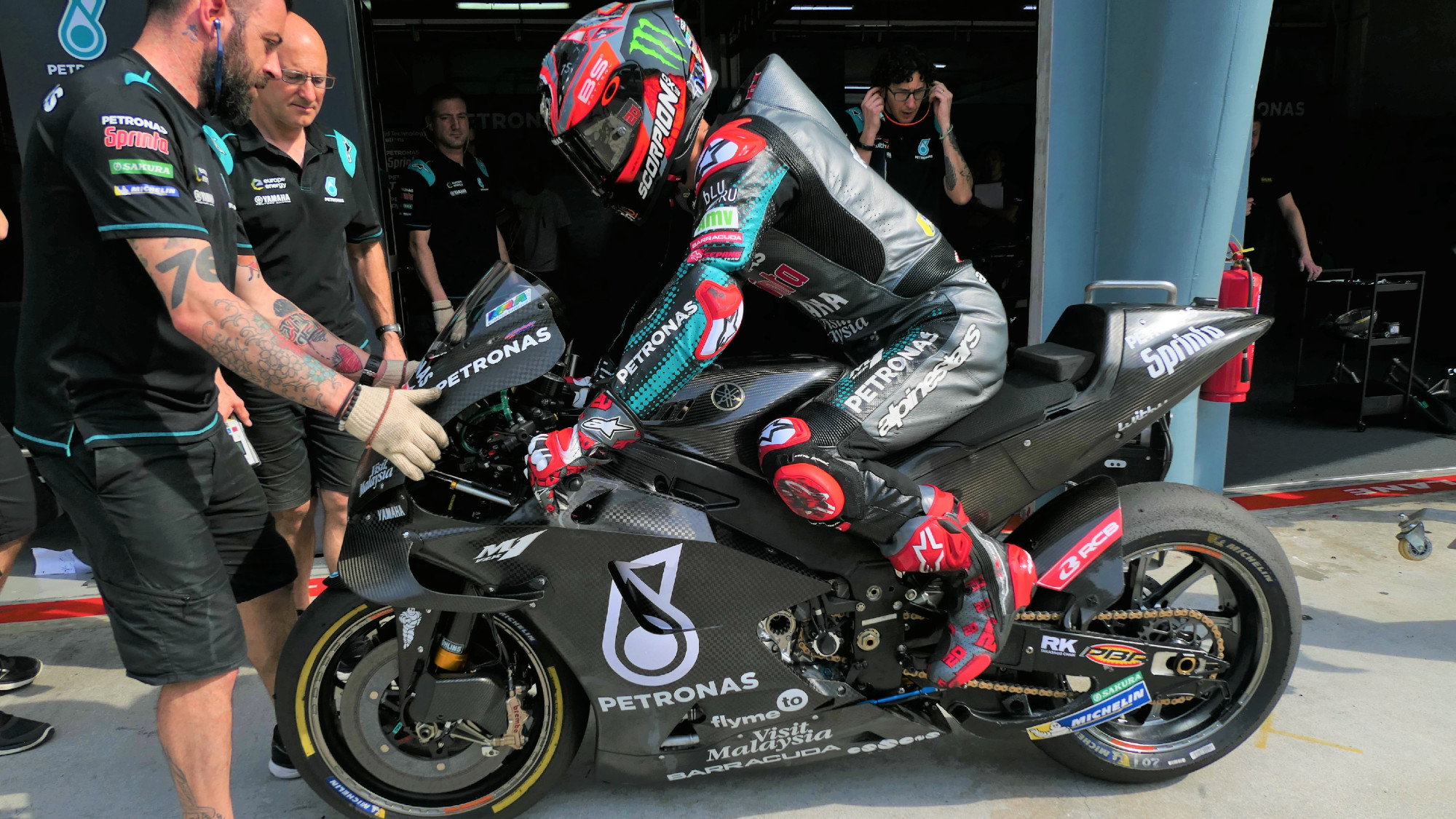 Presumably, Yamaha is working to create a 2020 engine/2021 chassis combination that mimics the 2019 engine/chassis combo, but this will be difficult to achieve because different engine mounts and different crankcases mean different overall rigidity. All these variables may be tiny, but MotoGP is all about the details.

(This reminds me of 2012, when Bridgestone changed its front tyre mid-season, causing chatter problems for Honda’s RC213V. The bike chattered worse in right-handers than left-handers, because the mass of each side of the bike was a few grams different.)

Yamaha must have spent many, many hours examining Suzuki’s title-winning GSX-RR trying work out how another motorcycle with the same basic architecture can be so much more consistent from one track to the other.

Both bikes rely on the front tyre to enter corners fast, allowing them to carry lots of corner speed, which gives them a rapid exit. But the Yamaha needs to generate exactly the right temperature in the front tyre or it’s going nowhere fast.

“The tyres are the same for everybody, but with the Yamaha you really need the front tyre at the right pressure,” says Petronas Yamaha team manager Wilco Zeelenberg. “The strong point of the Yamaha is brake hard, stop in a short period, release the brake and turn very fast through the corner. If the front-tyre pressure increases you lose performance in that area, which means you cannot use our strong point of flowing through the corners. And then you go backwards.”

That’s why Yamaha riders need to qualify on the front row, so they’ve got fresh air ahead to keep the front tyre cool. It’s no coincidence that all seven of Yamaha’s 2020 victories followed front-row starts.

“If our guys qualify well they can start well and win the race,” adds Zeelenberg. “But if they are eighth or ninth in the pack then it’s impossible to do anything, because the front-tyre pressure increases and they lose the Yamaha’s advantage. With the Yamaha there’s only one way: be on the front row, go for it and keep pushing.”

Of course, despite all the talk of small but crucial difference between the 2019 and 2020 M1s, it’s entirely possible that there is no real difference to the way they work on the racetrack. For example, Morbidelli suffered from tyre-pressure problems as much as Yamaha’s other riders. At the first Valencia race he qualified eighth which got him stuck in the pack, so his front-tyre pressure soared and he struggled to 11th. The following weekend he qualified on pole and led from start to finish.

So what might be the difference between Morbidelli and his 2019 M1 and Quartararo, Viñales and Rossi and their latest-spec M1s? Perhaps the biggest difference is the rider and his crew chief. 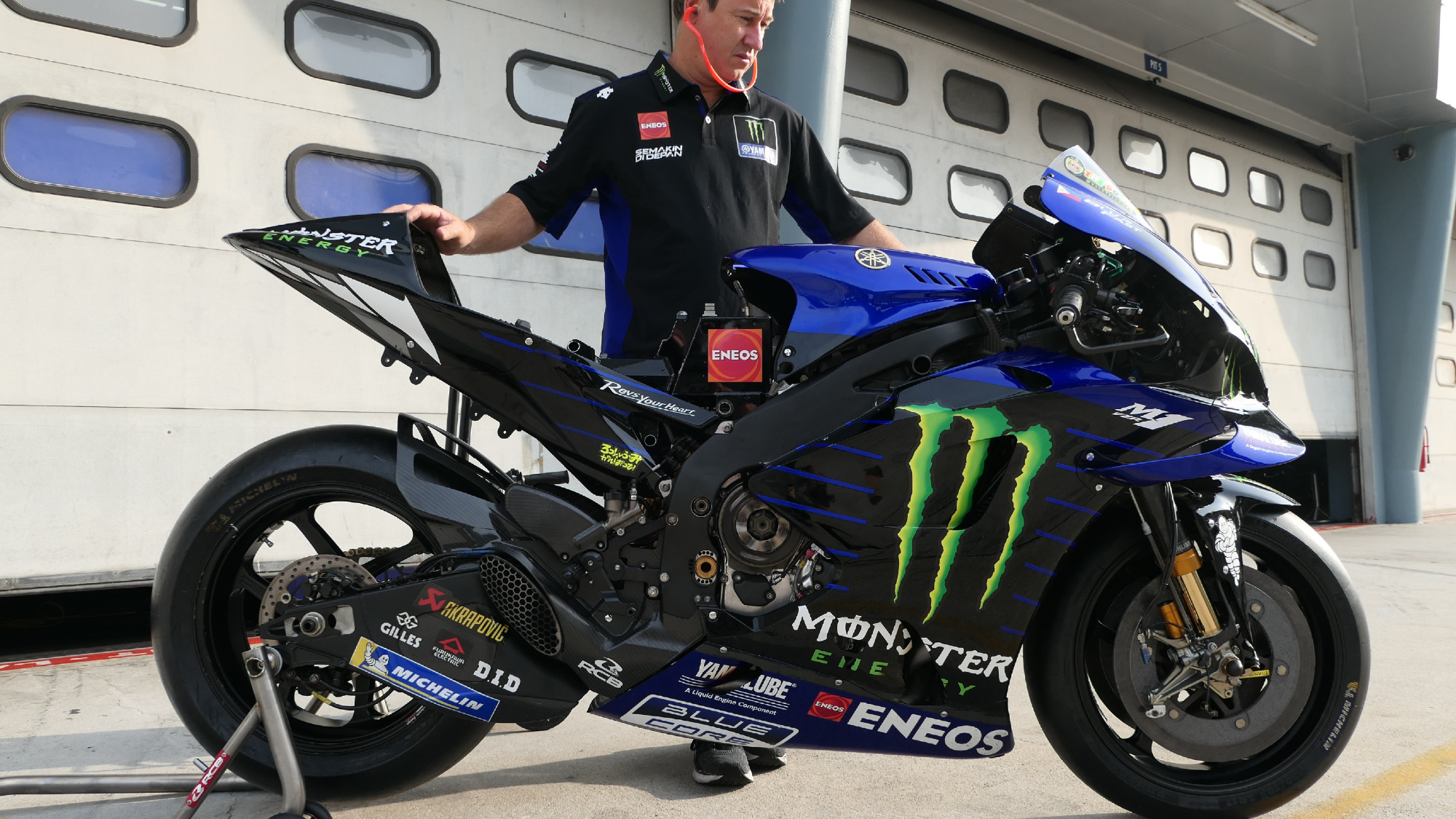 Morbidelli is very calm and able to retain his focus when things aren’t going to plan, unlike Quartararo and Viñales, who seem to lose their cool as soon as the Yamaha loses grip.

Consider Morbidelli’s mindset at the start of last season. He was angry that Yamaha wouldn’t give him its latest M1, but he turned that negative into a positive.

“I was frustrated, but I managed to use my anger and frustration in the right direction,” he says.

Morbidelli’s crew chief Ramon Forcada is just as crucial to his success. The Spaniard has worked exclusively on YZR-M1s since 2008, so he knows more about the bike than anyone and his working methods are solid, logical and pragmatic. This makes him the Spanish Jeremy Burgess. Or perhaps JB was the Australian Ramon Forcada.

“I think Ramon and I work very well together, because with him I’m able to understand what I need from the bike quite quickly,” adds Morbidelli. “With Ramon we are able to make the right steps at the right times.”

“Franco is perfect – he’s a very good guy and it’s nice working with him,” says Forcada. “He tries to understand exactly what is happening with the bike and he works a lot to improve his riding, so he doesn’t just ask us to improve the bike. He always tries to understand exactly where the other guys are better than him and if there’s something we cannot fix he accepts the limitation and tries his best.”

You won’t be surprised to hear that Morbidelli wasn’t angry when Yamaha told him he would have to stick with his 2019 bikes this year, rather than use 2021 M1s.

Some people will say it’s wrong for Yamaha to keep the Italian on old bikes this year, others will say it’s the perfect insurance policy in case the 2021 M1 is no better than the 2020 iteration.

Morbidelli is entirely capable of winning this year’s title and it will be quite something if the toughest championship of them all is won by someone riding a two-year-old bike. Has that ever happened before? It’s impossible to say with any exactitude. 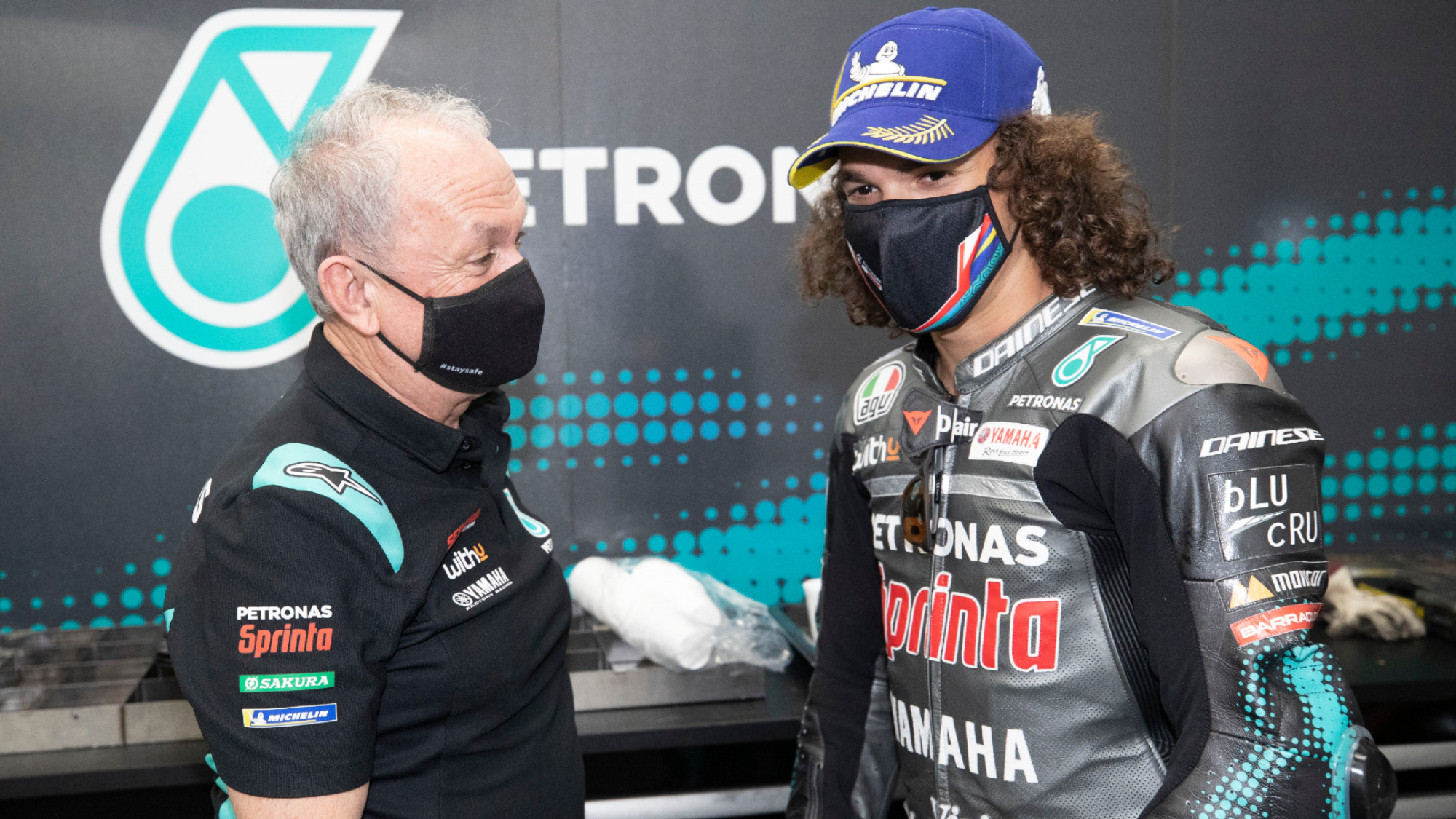 What about the valves?

Yamaha suffered another PR disaster last year when it was punished for using illegal valves in its M1 engines at the season-opening Spanish GP.

MotoGP regulations require all engine internals to be identical to a sample engine delivered to technical control before the first race. Before the season started Yamaha’s outside valve supplier told Yamaha engineers that it could no longer make valves for the M1s, so Yamaha found another company to manufacturer valves to the exact-same spec. However, there are minor differences in the hardness of the valves made by the two companies.

Yamaha’s crime was only discovered because several of its engines went bang at the first race, so Yamaha asked MotoGP technical director Danny Aldridge if it could fit its other engines with the different batch of valves. That’s when the problems started.

Yamaha insists that its crime was committed in error, not on purpose. But the punishment – losing constructors points from its victories at both Jerez races – cost the company the constructors’ world championship, which it last won in 2015.

Due to the Covid-related engine regulations, some people are wondering how Yamaha can build enough engines for 2021 without using more illegal valves.

“Eventually it was discovered that the valves in the original control engine were also from our new supplier, so that meant we could use these valves in the rest of our 2020 engines and we’ll also be able to use them in our 2021 engines.”