Darryn Binder will partner Andrea Dovizioso next season in MotoGP at the newly-rebranded RNF independent team.

The South African will make the leap from Moto3 next year to join brother and current KTM rider Brad in the premier class.

After seven seasons in the junior category, Binder has one Moto3 victory to his name in the series, taking the win at last year’s Catalan event.

This season, he has been consistently in the top ten and has two podiums this season, both of those coming in Qatar. He currently sits sixth in the Moto3 standings on 123 points.

“I’m extremely grateful for this opportunity, as it has been a lifelong dream to race in the MotoGP category,” he said.

“I definitely didn’t expect to make the jump straight from Moto3 to the highest class, but I do believe I’m up for the challenge, and I’m ready to put in all the hard work for 2022. 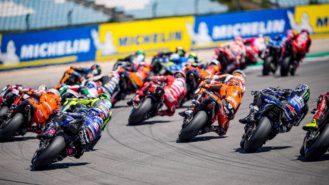 “My target at the beginning will be just to find my feet in the big class and learn as much as possible to get stronger and stronger throughout my rookie season.

“I would like to say a really big ‘Thank you’ to Yamaha and the RNF MotoGP Team for everything they have done to make this possible as well as everyone who has been involved in getting me to this point.

“I’m now just looking forward to riding the Yamaha YZR-M1 for the first time at the end of this season.”

Petronas Sepang Racing Team will become RNF MotoGP Team in 2022 though there will be some continuity with current team principal Razlan Razali remaining in his role with the team next season.

The new sponsorship agreement is currently a one-year deal though there is an option to extend the partnership into the 2023 and 2024 seasons.

Managing director of Yamaha Lin Jarvis said the signing of Binder was a chance for a younger rider to make a fresh start in MotoGP.

He compared the South African to Fabio Quartararo and Franco Morbidelli though both of the current Yamaha riders had Moto2 experience before their promotions up to MotoGP.

“I want to give a warm welcome to Darryn. We are delighted that he is joining the Yamaha line-up next year. We’ve had many conversations about who would be a good match for the new RNF MotoGP Team set-up.

“It’s a fresh start for the Yamaha satellite team and that makes it all the more fitting to have a young and eager rider like Darryn join them, as Fabio and Franky did before him.”