Last weekend was the end of Andrea Dovizioso’s hopes of winning the 2020 MotoGP world championship, indeed of ever winning the MotoGP title.

The man who finished runner-up to Marc Márquez over the last three seasons went into Aragon Two confident of keeping himself in the title hunt. He was convinced he could have a better race, thanks to warmer weather than the previous weekend when cold track temperatures robbed him of so much grip that he finished down in seventh.

“We are still there and the championship is still open,” he said after Aragon One. “I hope and believe that if the conditions improve then we will have the biggest margin for improvement in the next race. We have to keep dreaming and keep working.”

Instead, things went from bad to worse. He finished Sunday’s Teruel GP in 13th – his worst result of the year – and struck a very different tone after the race.

“I don’t have any speed to think about the championship,” he said. “If we speak of the chances I have then at this moment I think they are almost zero. Without speed, you can’t fight.”

Dovizioso’s problem at Aragon was the same as it’s been all season. While Michelin’s softer construction 2020 rear slick has brought out the best of the inline-four Suzukis and Yamahas it’s brought out the worst of the Ducatis and Hondas.

He knew that at the season-opening Spanish, where he surprised himself with a third-place finish.

“I’m still not that good in the middle of the corner,” he said at Jerez. “I’m riding in a different way to last year and I still don’t have the confidence to do what I need to do.”

The story remained the same at August’s Czech GP, where he slumped to 11th, the first real sign that Ducati was in big trouble.

“The tyre is the only difference compared to last year,” he said. “When I have to do the lap time and push harder on the front I’m not able to use the potential of bike and tyres. I’m not riding in a good way like in the past, when I was able to brake hard, control the slide to the middle of the corner to be a bit wider and then come back very close to the apex and pick up the bike.”

At recent races, Honda has found a way out of the doldrums after making myriad changes to its RC213V. Ducati has worked just as hard to marry the tyre to the Desmosedici but without success. The new tyre rewards bikes that use corner speed and in recent years the bike has won races using a point-and-squirt technique.

Pramac Ducati’s Pecco Bagnaia used lots of corner speed to be the fastest man in both Misano races, but once the championship moved to less grippy racetracks he’s struggled to recreate that speed. 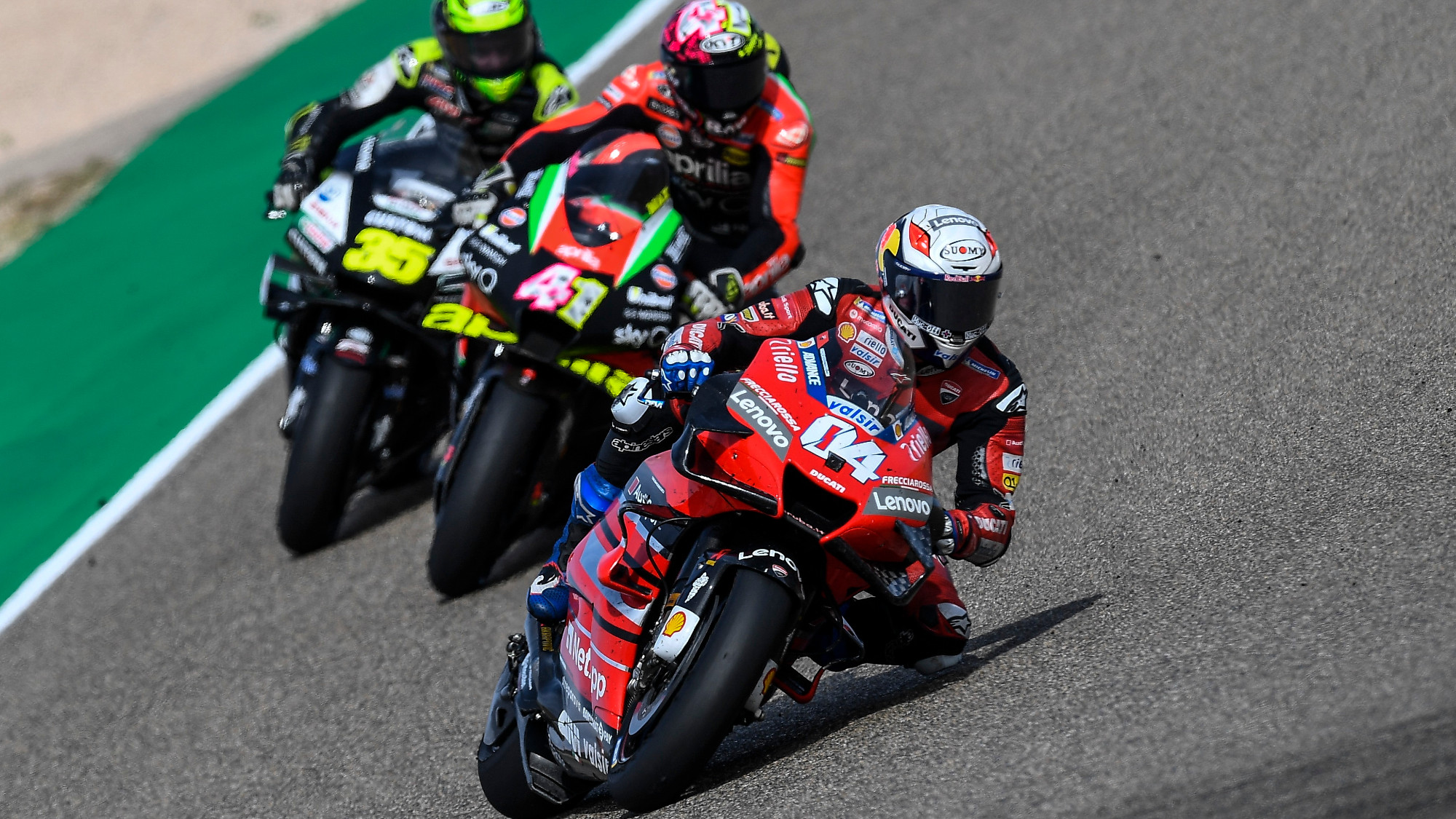 On Saturday afternoon at Aragon Dovizioso was asked to explain why Ducati was suffering so much.

“This is easy to answer,” he replied. “I think it’s more difficult to explain where we gain!”

His biggest problem was his inability to use the rear tyre to turn the bike through Aragon’s myriad changes of direction.

“This is a track where turning is pretty important, and the way you have to ride with this tyre, which doesn’t give you a lot of grip on maximum angle, you have to wait to open the throttle,” he said.

Asked if there were any parts of the track where he had an advantage over his rivals he deadpanned, “Yes, fifth and sixth gear on the back straight”.

All this season Dovizioso has sounded like a broken record, explaining pretty much the exact same problems at every race. It’s reminiscent of Valentino Rossi’s two years at Ducati when at every race he described the problems of poor turning and lack of feel from the front tyre.

But all five riders have had such up-and-down results that Ducati has only two riders in the top of the championship – Dovizioso going backwards in fifth and Miller in ninth.

“If you analyse Ducati’s season you see a lot of up and down, with some riders showing really special speed in some moments, but look at where they are in the championship,” added Dovizioso. “This confirms that the situation is not under control for us, so it’s very difficult to manage and to use the potential of the bike. Because we work a lot on the set-up, and we try to adapt, but in the end, as you see, it hasn’t worked.”

Ducati’s struggles with Michelin’s latest rear has ended the company’s love affair with the French tyres. It’s no coincidence that Ducati commenced its recent run of strong form when MotoGP switched from Bridgestone to Michelin in 2016. Ducati hadn’t won a race in the last five years of the Bridgestone era but was immediately in the hunt with the Michelins, winning two races in 2016 and a further 18 since.

Dovizioso’s future remains uncertain. The 34-year-old Italian’s only realistic chance of staying in MotoGP is joining Aleix Espargaro at Aprilia. Otherwise, it seems likely he will retire – and his body language throughout much of this year suggests he will be happy with that outcome.

Hamilton's search for 100th F1 win: 'It's taking longer than ever to get it'

Can Lewis Hamilton finally log his historic 100th Grand Prix victory in Sochi after a wait of four races since his 99th success at Silverstone? If he does pull it…