Ducati is hoping Michelin will introduce a new front slick next year to help the Italian factory challenge for the MotoGP title once again.

Despite winning the constructors’ title, Ducati has just completed its worst MotoGP season in years. Desmosedici riders won just two races, compared to an average of five victories per year during the previous three championships.

This turnaround is largely due to Michelin’s grippier 2020 rear slick, which suits the Suzuki and Yamaha inline-fours better than the Ducati and Honda V4s.

“The tyre is the only difference compared to last year,” says Andrea Dovizioso, explaining the reason for his fall from three-times MotoGP runner up to fourth in the 2020 championship.

Ducati engineers believe that a better front slick could restore the balance of the Desmosedici – by increasing front grip to match increased rear grip – so it can compete for the 2021 MotoGP title.

“That’s the point – with the 2020 rear tyre our problem at the front of the bike has become bigger,” says factory Ducati team manager Davide Tardozzi. “We are pushing Michelin to help the situation, not just to help Ducati, because some other teams have the same problem. We will see what happens in the winter and if Michelin will let us test a different front tyre when we go testing in Malaysia and Qatar. It’s a political situation. We hope, we hope, we hope [for a new front tyre].”

Michelin has been developing a new front that improves stability and grip into corners for some while. MotoGP riders tested the tyre last year and the plan was to introduce it next season, to match the 2020 rear. However, due to budget and logistic constraints caused by Covid-19 Michelin decided to delay the tyre’s introduction until 2022. That’s the decision Ducati hopes to overturn.

Ducati obviously believes that a grippier front will fix the problems suffered by several Desmosedici riders this year.

“The grip of the new rear is incredible and more grip is always welcome,” said Tadozzi at Misano in September. “But sometimes it can create problems, so our riders cannot slide the bike to make the turn.”

Dovizioso, Danilo Petrucci and even Jack Miller sometimes struggled with the tyre, but the rider who struggled the most was Pecco Bagnaia, Miller’s team-mate in the 2021 factory team.

The former Moto2 world champion had numerous front-end crashes during 2020, always losing the front as he released the front brake.

In motorcycle racing there are two big danger zones with the front tyre – when the rider releases the front brake into the corner and when he gets on the gas out of the corner.

The situation is much the same when the rider exits a corner. When he opens the throttle he shifts load to the back of the motorcycle, reducing front tyre contact and grip.

These are the moments when most MotoGP riders fall down – and you can usually tell whether it’s an off-brake or on-throttle crash by listening to the onboard audio of a crash.

Dovizioso uses the phrase ‘pop up’ to describe that moment when the tyre returns to its normal shape. It’s the rapidity of that change from flattened profile to normal profile which seems to be the Michelin front’s biggest problem, because many riders can’t adjust quick enough to the reduction of grip.

When everything is just right, Bagnaia can use his super-smooth technique to carry huge speed into corners. But he suffers when track temperature is low or when there’s not much grip.

In theory, a better front tyre would be a huge boost to Bagnaia in 2021. Meanwhile he’s working on his difficulties with Tardozzi and Ducati engineers.

“The problem is the temperature of the front tyre,” explains Bagnaia. “With my style it’s more difficult to heat the front. This is an advantage in hot conditions, because I don’t overheat the tyre, but when it’s cold it’s worse.

“Now I am starting to work better at this – I’m trying to push hard from the moment I enter the track, like Jack does. This is not so easy to do, but it’s the only way to heat the tyre when the track temperature isn’t so hot.” 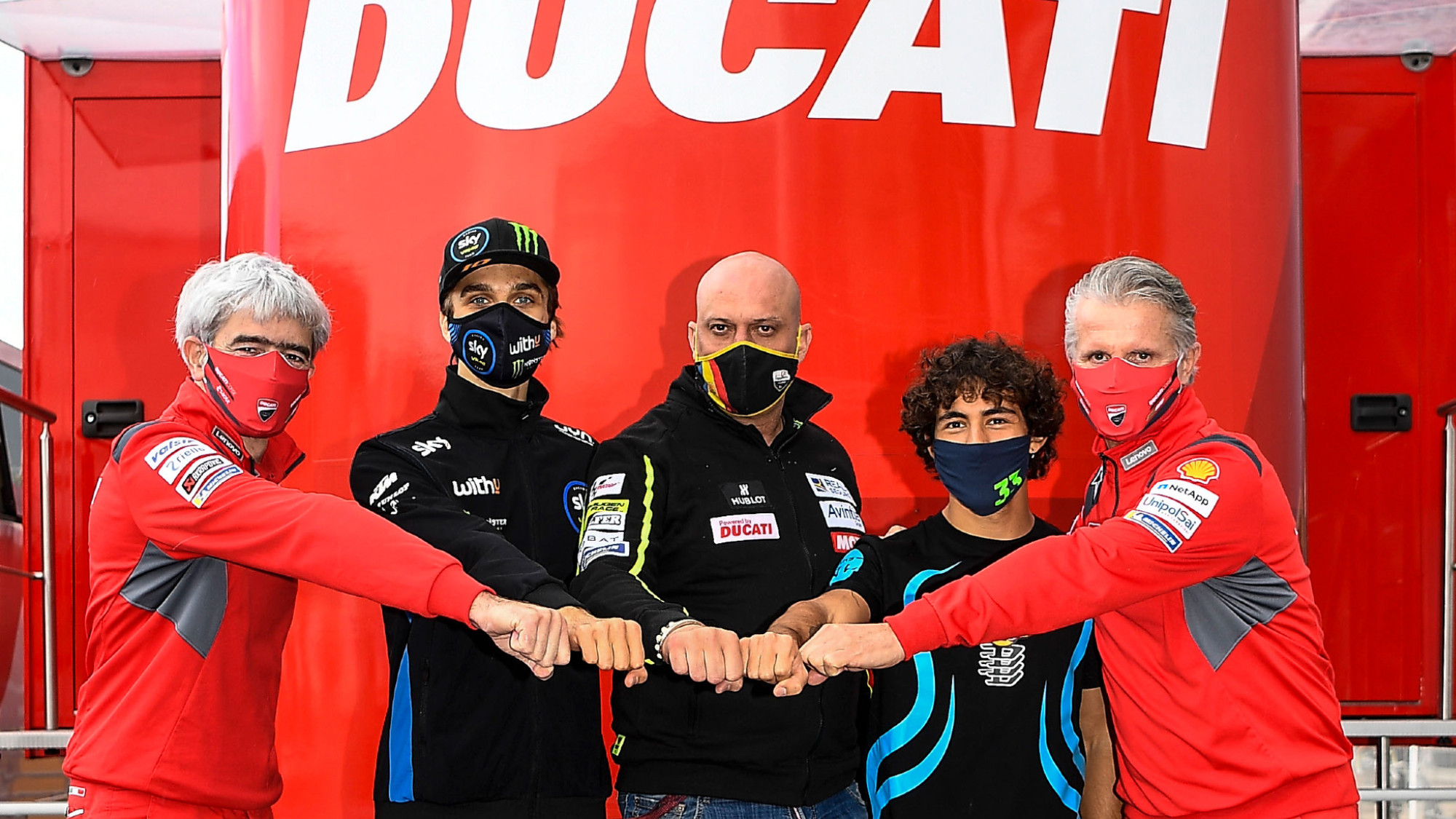 Ducati said goodbye to its old guard on Sunday – Dovizioso and Petrucci – and promoted five youngsters for the 2021 MotoGP championship. The factory team will be 25-year-old Miller and 23-year-old Bagnaia, while newly crowned 22-year-old Moto2 champion Enea Bastianini, 23-year-old Luca Marini and 22-year-old Jorge Martin will ride with the Pramac and Esponsorama squads, all of them under Ducati contracts

Factory team manager Davide Tardozzi can’t wait to start working with the Moto2 trio, who he hopes will make Ducati stronger than ever in the coming years.

Bastianini, Marini and Martin were three of Moto2’s biggest stars last season, winning more than half the races between them.

“These three guys are the best riders of Moto2, together with Marco Bezzecchi,” says Tardozzi. “I think we have signed three rookies that are different to each other.

He doesn’t know how he did it but he’s able to do it. I love that!

“Martin is a very talented guy that rides without thinking – he’s a natural rider and doesn’t know why he’s so fast. Marini is the exact opposite – he’s a very, very clever guy. I don’t want to minimise him but he’s perhaps the least naturally talented of the three, but he’s the really clever one who may go further than the others, because he knows how to build himself and his speed.

“Bastia is a genius of two wheels. I love Enea – he’s full throttle! Sometimes I speak with him because he’s fast for ten laps, then he makes some kind of switch and makes his fastest lap on the 11th lap. He makes me crazy – I tell him, ‘Think earlier and maybe the tyres would’ve allowed you to go very fast earlier’. And he says, ‘Yeah, but I was doing something else’. This is Enea! He can invent great things, like at Misano Two when he passed Marini and some other guys at Turn Four, entering with maybe 20 kays faster than them and winning the race. He doesn’t know how he did it but he’s able to do it. I love that!

“Those guys will be in our satellite teams but they are all under Ducati contracts. Together with Jack and Pecco in the factory team we expect we will be very strong, if they can all make the next step.”