During this period of Covid-19-affected races, during which journalists are not admitted to the paddock, we get the story of the weekend from a leading MotoGP personality. After the first races of 2020, dominated by Fabio Quartararo, it’s the turn of Petronas Yamaha SRT team director and former 250 and 500 GP rider Johan ‘Stiggy’ Stigefelt.

“It’s been tough here at Jerez with the Covid situation, but what an amazing two Sundays with Fabio! We saw his potential last weekend and today he was in another league to everyone else. Fantastic!

“To be honest I didn’t really notice the absence of the crowd. It’s weird because you don’t think about it. You are focusing 100 per cent on the race, looking at the monitors, checking the sector times and the lap times, so it’s a weird feeling that there’s no fans, but nothing really strange.

“After last Sunday’s win the team had a big party, without breaking any Covid rules – we stayed at the hotel and we’ll do the same again tonight.

“It’s difficult to describe Fabio’s technique of riding, but he never makes a mistake. He always puts the bike in the same spot, the same braking area, everywhere he is the same. He is so accurate and he never makes a mistake, that’s what really surprises us when we check the data. Other riders always make mistakes – they brake too late or run too fast into a corner, but Fabio is so accurate. That’s his advantage over the others.

“When we look at Fabio’s data the tyres are working really well for him, even if they’re not working perfectly for everyone. If we look at Franco [Morbidelli] he struggles a bit more – he’s a bit more aggressive on the brakes, he uses a bit more lean angle and he pushes a bit more on the gas.

“MotoGP riding at the moment is about how you learn to ride with the tyres and how you maintain the tyres. That is Fabio’s other super-talent – he managed the tyres so well. Today Maverick [Viñales] really struggled with the tyres and Fabio did not, even though the way their bikes are set up is very similar. 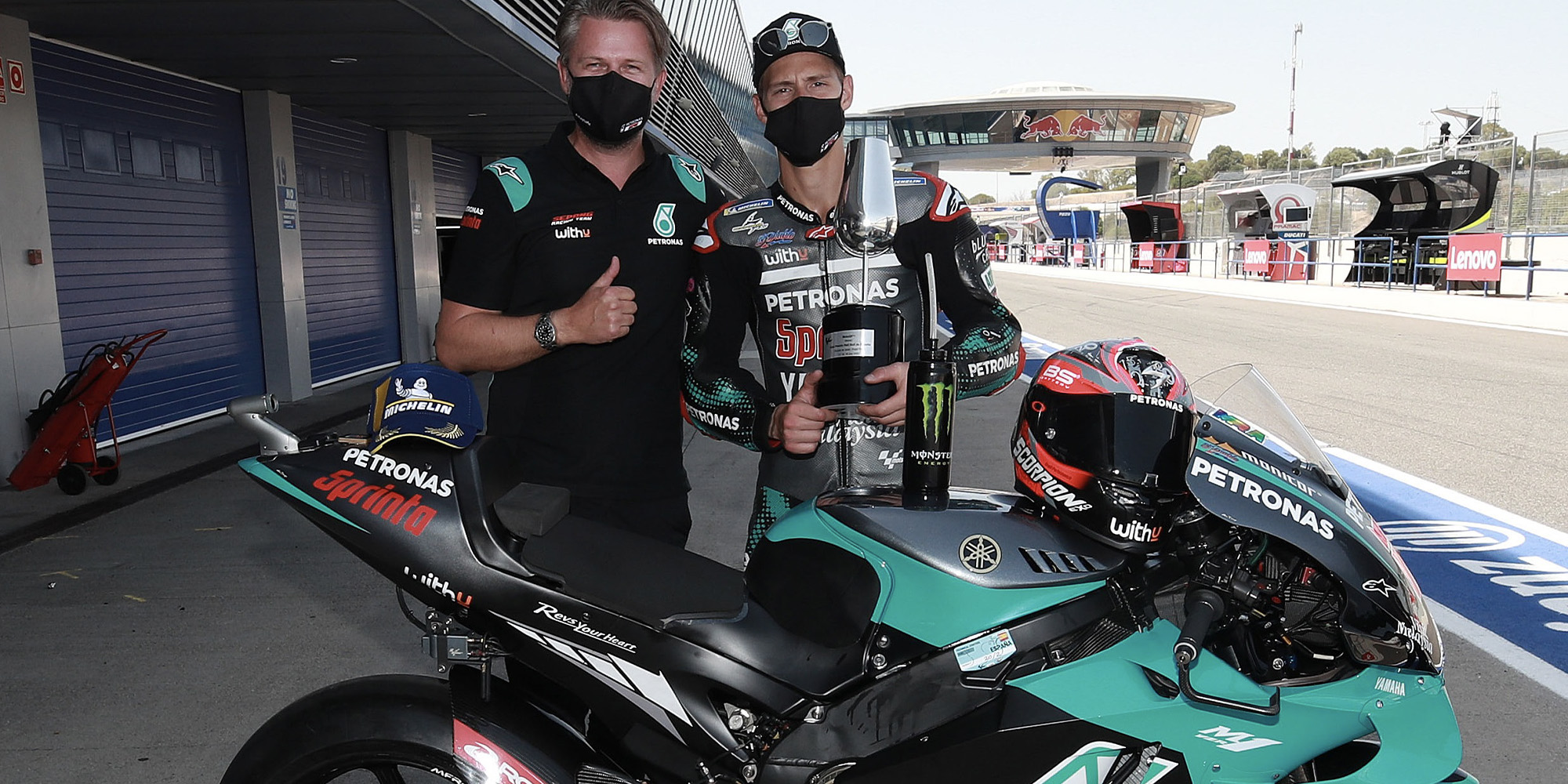 “Fabio is also incredibly cool and his feet are really on the ground. He knows the chance we gave him last year and how hard we work for him. At the time we signed him he wasn’t an obvious choice for a MotoGP ride because he was a mostly mediocre Moto2 rider. He really took advantage of the contract and the possibilities we have given him. When he first came to us he was already mature in his mind, in how he explained how the bike was working, but now he is a man, not a boy.

“Everyone knows that the Yamaha works well at Jerez but there are some difficult tracks coming up for us – Brno and then Spielberg. We are aware of this, so it’s already in our plan that the next three races will be tough. We will do our best, using the Yamaha’s corner speed. We can probably get away with it at Brno, but Austria will be very, very difficult, even if we definitely have more horsepower than last year. At Spielberg you need a lot of top speed, but despite that disadvantage Fabio rode really well there last year and got a podium.

“We have in mind that once we get to Misano things will be better for us, then probably again at Le Mans and Valencia too.

“I’m more nervous during the Moto3 race than I am in MotoGP because from the first lap to the last the racing is always like the last lap and even if you are super-strong you can never go away at the front and all the riders are around you all the time. It’s risky.

“John McPhee did a great job in both Moto3 races here. He’s been really strong since preseason tests, he was strong in Qatar and he was up for the win last Sunday and again today. After what happened at the last corner last week he just wanted to get some points. He’s riding amazingly well at the moment and he’s so strong throughout practice, riding alone, going for time attacks, everything. It’s a pleasure to work with him.

“Our team trucks go straight from here to Brno, but we are quite worried, because we have 17 UK staff in our team, so the UK quarantine situation is a concern, but we are getting help from Dorna. Then there is the situation around Barcelona. But the reality is that no one knows what will happen, because in a week’s times the situation could be worse or it could be better, we’re not sure. As a team we can’t do much – we have to follow Dorna and see what they come up with. Talking with them this weekend it seems like they have it under control: what kind of documents we need, what kind of tests we need before we get there and so on.

“We know we all have to be careful between races and respect the protocol. And four days before we travel to Czech we have to get Covid swab tests. We’ll see what happens…”