The four main controls on a MotoGP bike – throttle, clutch, front brake and rear brake – are tools that can be used for jobs other than those originally intended. The throttle can be used to steer the bike, the clutch can be used for traction control (at least before electronics took that job) and so on.

The busiest tool of them all is the rear brake, which riders use to stop the bike, to steer the bike and to reduce wheelies. In other words, before the corner, through the corner and out of the corner.

Both Maverick Viñales and Valentino Rossi tell us that Fabio Quartararo’s crucial advantage is how he uses the rear brake to help him get stopped quicker than anyone else. This doesn’t only save time on the brakes it also sheds more speed in a straight line, so he doesn’t have to risk so much on trail braking into the corner.

It’s also one of Marc Márquez’s great skills. Watch Márquez braking into a slow corner and the rear tyre is skittering left and right, locking and unlocking. Then he uses the rear end like a rally driver, awaiting the perfect moment, when the rear kicks out (as opposed to in) to flick the bike on its side and point it at the apex.

During the Bridgestone era many riders hardly used the rear brake to stop the bike because the front slick was so strong they could get all the stopping power they could handle through the front discs.

That’s no longer the case. While Bridgestone’s front slick was better than its rear, Michelin’s rear is better than its front; so riders really need the rear tyre to help them get stopped. Most MotoGP riders lock the front tyre, or have the tyre on the verge of locking, every time they hit the brakes.

This is why rear-brake technique is more important now than it’s ever been. And this is why riders like Bradley Smith, who was one of those riders who kept away from the rear brake, struggled with the switch to Michelin. 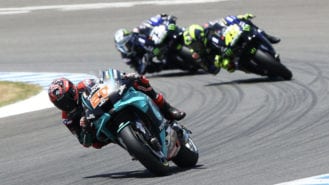 It’s not just about how the rider uses the rear brake, it’s about how he plays with the bike to keep the rear tyre in contact with the asphalt, because if he allows the front end to dive too much, the rear tyre will lift and become useless during the braking phase.

Firstly, Quartararo hits the rear brake before he hits the front brake, to squat the rear of the bike and load the rear tyre. From there it gets more difficult to work out exactly what he does, unless you have access to his data.

Obviously, he won’t tell us his secret. “Honestly, I just have the feeling to brake really hard and I have really good confidence with the front tyre,” he said at Brno. “Here for the first time I’m losing a bit of rear contact on the brakes, not because the tyre is lifting but it’s just floating on the track, maybe because there’s a lot of downhill and uphill here. Honestly, the way I brake is natural.”

All we can say is that Quartararo plays with the bike, making micro adjustments every millisecond to front-brake pressure, rear-brake pressure, body position and everything else to modulate grip and therefore braking power between the front tyre and the rear tyre as he approaches the corner.

It’s possible that the most important work on improving deceleration with the rear tyre is done in pitlane. The main job of the crew chief and the engineers is to work with the bike’s front-rear traction balance.

As always, it’s about the traction circle of each tyre, which is what racing (bikes and cars) is all about: always maintaining the highest level of acceleration in the appropriate direction.

During braking, as in everything else, the aim is to go to the very edge of the traction circle, in this case thinking about maintaining enough tyre-to-asphalt friction at the rear of the bike. This can be achieved via a huge number of settings changes.

For example, a shorter swingarm puts more load on the rear, but also makes the bike more nervous, so can the rider live with that, or will it create negatives in other parts of the lap? 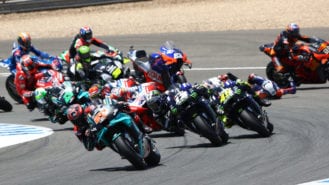 Reducing rear ride height also increases rear load, but creates lazier steering geometry, so will that hurt the rider or help him overall? The Yamaha turns well, so perhaps this is an easier compromise with the M1 than some other bikes.

Engineers can also play with the swingarm pivot point, raising or lowering it to adjust chain force and thereby increase squat at the rear. And then there’s clutch set-up, engine-braking mapping and brake spec. MotoGP riders have a range of rear-brake equipment they can use – steel disc sizes from 210mm to 250mm, solid or vented. Then there are different master pumps to adjust feel and different hoses, steel or rubber, again to provide a different feeling, according to rider preference. A myriad number of combinations.

There are also choices for controlling the rear brake – foot-operated brakes, thumb brakes and scooter-style brakes. More and more riders are moving towards hand-operated rear brakes because the lever is easier to get at when the rider wants to turn at full lean in a right-hander or when he wants to keep the front end down during acceleration. Also, hands are much more sensitive than feet.

Recent developments in aerodynamics have also played a part in changing braking techniques and settings. When front downforce is increased the front end will initially dive more violently when the rider hits the brakes, which unloads the rear quicker. Bikes have been rebalanced in recent years to deal with this and this is one reason why factories don’t want to increase downforce – to reduce wheelies and therefore improve acceleration – any more

The main point to take away from all this is that the compromises that riders and engineers now work with to improve rear braking have to be fed into the huge number of compromises they were already dealing with in their search for the ultimate sweet spot for Sunday afternoon.

I asked Ducati for clarification on its ride-height adjuster. “Petrucci already said too much,” said a team spokesperson.

Finally, and this may just be me hallucinating due to lack of contact with the paddock and pit lane… but what about Ducati’s ride-height adjuster? The factory’s so-called shapeshifter squats the rear under acceleration to increase traction. Might it also play a role during braking, by loading the rear tyre?

When a GP20 rider presses the lever on the left handlebar the rear of the bike compresses. The rear stays low on the straight and still has that attitude when the rider hits the brakes, so if the rider uses the rear brake first might he get more deceleration from the heavily loaded rear tyre before he hits the front brake, which disables the shapeshifter?

“We use this system when there’s a big acceleration area and a big braking area,” explained Danilo Petrucci at Brno. “When we brake for sure the bike is lower, then we need to brake really hard to disable the system.”

I asked Ducati for clarification on this point, but the company didn’t make an engineer available. “Petrucci already said too much,” said a team spokesperson.

Ducati riders used the shapeshifter three times per lap at Brno, usually exiting Turns Four, Nine and 12. At Jerez they used the device twice per lap, exiting Turns Five and 13.