Maverick Viñales will begin his Aprilia career with a two-day test at the end of this month, the team has confirmed.

The Spaniard, who was team-mate to MotoGP championship leader Fabio Quartararo at Yamaha until his contract was terminated last week, will test at Misano as he begins his preparation for the 2022 season with Aprilia.

He will be out on track at the Misano World Circuit Marco Simoncelli on Tuesday August 31, as well as on the following day.

Viñales was suspended by Yamaha after hitting the rev limiter on his M1 bike at the Austrian Grand Prix.

Two weeks later, the team announced that the partnership had been ended with immediate effect.

Aprilia hailed the “encouraging results” that the team had witnessed so far and that it was looking to continue that path with Viñales. 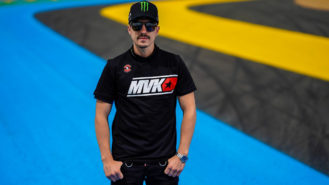 Maverick Viñales’s MotoGP meltdown – was it really so bad?

Modern sport is a professional business but in fact the whole point of sport is to give people a break from their professional worlds: the workplace, the office, the factory.…

“From a technical point of view, it is always fascinating to listen to the impressions of a rider who is testing your bike for the first time,” said Romano Albesiano, Aprilia Racing Technical Director. “Especially with a champion like Maverick, who we are pleased to welcome into the Aprilia Racing family.

“After the great work carried out on the track by the racing department over the last two years, we are adding yet another piece to the path of growth that we are undertaking with encouraging results.

“Clearly the first approach involves a very practical adaptation phase, in terms of ergonomics and setup, which we know vary for each rider. But I’m sure that Maverick’s talent and speed will come to the fore right away and I can’t wait to start working together.”