When octogenarian HRC mechanic Carlo Murelli turned up at Mugello, he brought memories of two of Honda’s greatest race bikes flooding back 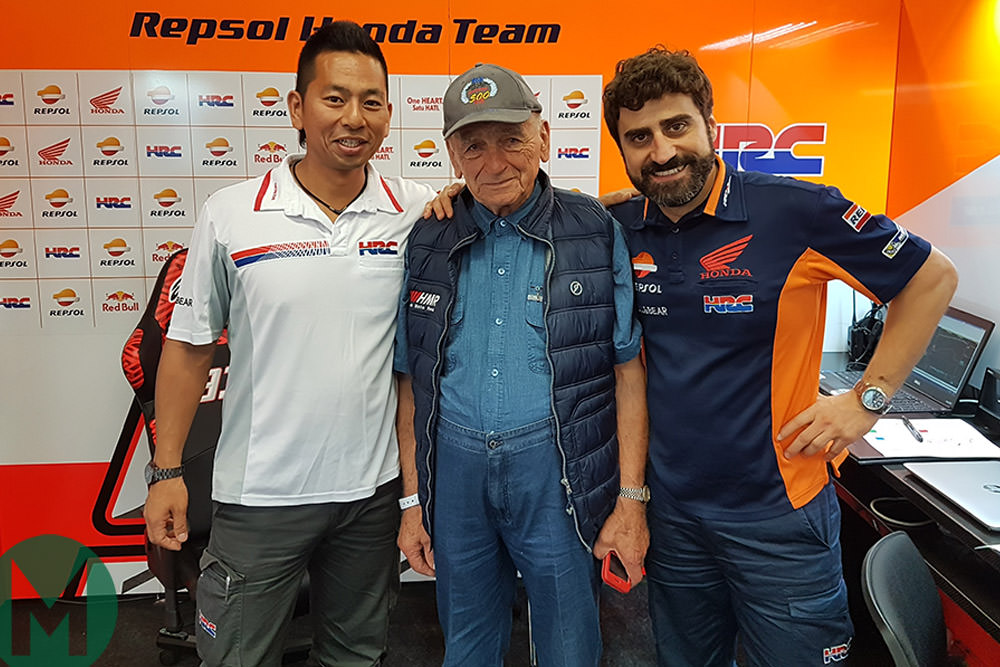 During the Barcelona MotoGP weekend there was lots of talk about Jorge Lorenzo, Marc Márquez and the HRC legacy. The coming together of the two Spaniards at Repsol Honda next year creates the strongest line-up in HRC history: the company has never put two riders on the grid with seven MotoGP world titles between them (and probably eight by the end of this season).

However, Lorenzo joined Honda too late to meet one of HRC’s first mechanics, who visited Mugello earlier this month – his first time at a Grand Prix since he stopped working in the paddock in the late 1980s.

Carlo Murelli is an 85-year-old Italian with a sparkle in his eye, a spring in his step and a hearing aid in each ear; the consequence of half a lifetime spent toiling in the pitlane and dyno rooms.

The NS was the first machine produced by HRC, established in 1982, and won Honda’s long-awaited first 500cc world title the following year. The NR was Honda’s quixotic attempt to beat the two-stroke hordes that had taken over the 500 class in the 1970s.

Honda had always been a four-stroke company and wasn’t ready to go with the two-stroke flow, hence the NR500, designed by Shoichiro Irimajiri, the genius engineer who had created Honda’s similarly fabulous five-cylinder 125 and six-cylinder 250 of the 1960s. 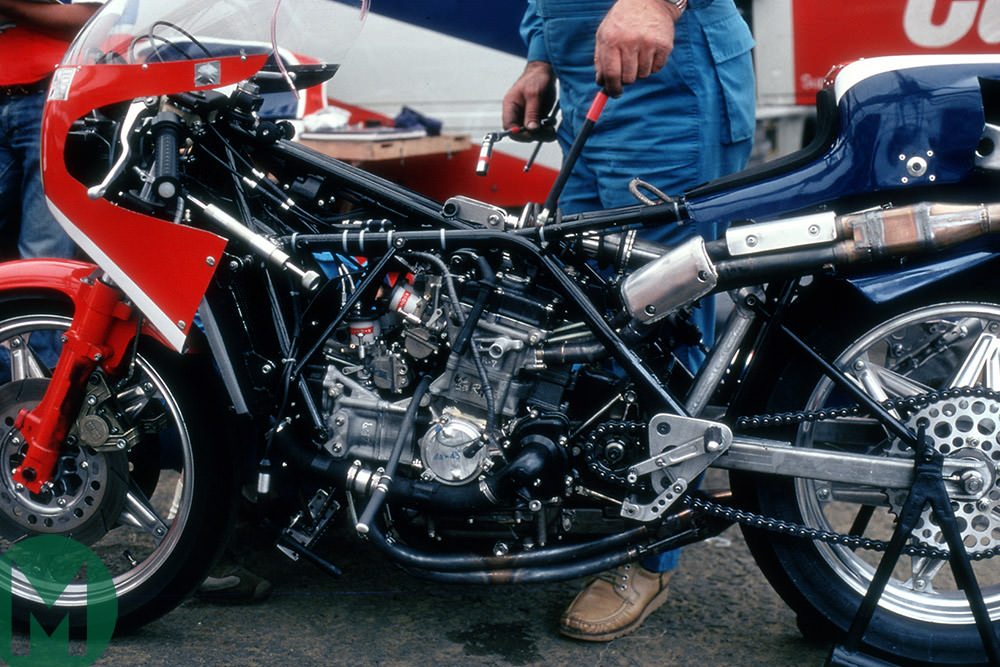 The NR500 (above, in 1980) was a mighty challenge, the motorcycling equivalent of going to the moon. Because two-strokes fire twice as often as four-strokes, the NR needed to spin twice as fast – so it did, all the way to 22,000rpm. The V4 had oval pistons with two spark plugs and eight valves per cylinder, so it worked like a virtual V8, with four pairs of linked combustion chambers. Each piston was carried by two conrods.

Murelli made a name for himself in Italy during the 1970s, tuning Honda CB500 production racers. He decided to take his career to the next level by writing a letter to Honda, asking for a job. He ended up working in Japan for five years, the only full-time foreigner on the NR project. At first, he worked at Honda RSC (Racing Service Centre), which became HRC in 1982, after which he moved to fettle NS500s.

“Europe and Japan were very different in those days,” says Murelli. “So it was a bit like being on Mars. And it was like a dream working on the NR. When I first started on the engine I couldn’t believe it would work because the [36mm] stroke was so short. I think if we had had fuel injection we could have been competitive, but with carburettors, by the time the NR engine had started, the two-strokes were already gone.” 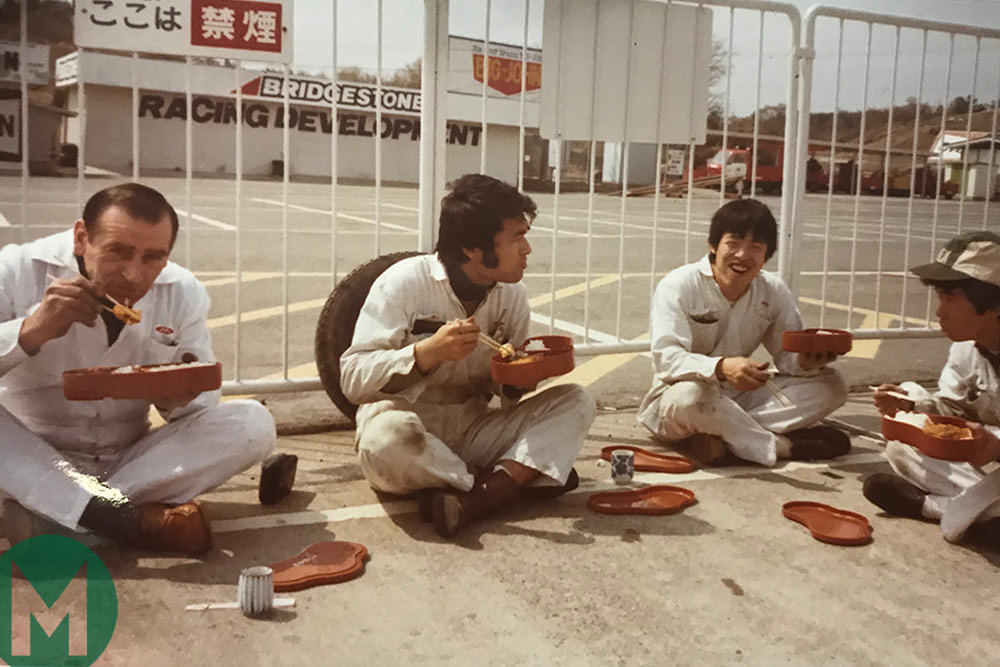 Despite the best efforts of Murelli (above, left, during NR testing at Suzuka) and many others the NR never scored a single world championship point, but it impressed twice, on both occasions in the hands of a very young Freddie Spencer.

In July 1981, the 19-year-old beat reigning 500cc world champion Kenny Roberts in a US championship heat race at Laguna Seca, which got underway with a clutch start, not a push start, which was the norm in GPs. Then a few weeks later he ran fifth in the British GP at Silverstone, until the engine expired. Spencer got a good getaway that day because Murelli had taught him the correct technique to coax an ultra-short-stroke, high-revving engine into life: run like Usain Bolt and thump your chest into the fuel tank to load the rear tyre.

The NR never got close to winning a Grand Prix, so the bike was a failure; a glorious failure and what a learning process for some of Honda’s finest engineers: Irimajiri, Takeo Fukui, Suguru Kanazawa and Yoichi Oguma. The NR taught them a huge amount about high-performance four-strokes, from the first slipper clutch and other new technologies to all kinds of exotic materials. Much of this know-how was later applied to Honda’s Formula 1 cars, race bikes and road bikes.

A fleet of minibuses took us to a Buddhist temple and we took along some bike bits for blessing.

The only other foreigner that regularly worked on the NR500 at RSC was Briton Nigel Everett, who remembers doing numerous dyno runs with Murelli. “It was a rolling-road dyno and they’d let us sit on the bike and ‘ride’ it,” Everett recalls. “The dyno had really strong cooling blowers that made Carlo’s ears flap around. We’d all be rolling around on the floor laughing; we were like big kids.”

But NR dyno runs weren’t always funny. “Once Carlo was sat on the bike when it went bang – the engine went pop and spat the oil out, so the bike went sideways, because it was only bolted down at the front. Honda was so keen to reduce friction that the oil we used was like water. So when an engine went pop they made a mess – they never blew at low RPM. The Japanese staff would gather all the bits together to make a jigsaw to make sure they had it all – there was never a chance to take a piece of piston home. The engine gave good horsepower on the dyno with straight pipes, but when they fitted silencers to bring it down to the Grand Prix noise limit they couldn’t keep the horsepower.”

Each engine – 32 valves, eight conrods and everything else – took a week to build. “We were doing 12-hour days and it took five full days to build an engine from the crank,” adds Shenton. “A cylinder head took a couple of days, just to do the shimming and grind in the valves, which were like 5p pieces. The pistons were about 80mm long and 30mm wide.

“Doing the backlash on the cam-gear drive took ages. You’d assemble each drive, check the backlash, then if it was wrong, take it apart, fit different needle rollers and do that again and again until you got it right. The NR had the first slipper clutch too. You had six different clutch spring colours; then to get the strength you wanted you could use about a hundred different combinations according to a chart.”

In present-day MotoGP, riders are restricted to seven engines per season. It was a bit different back in the days of the NR, when it was several engines per weekend.

“When we first raced the bike at Silverstone in 1979 we took the engines out at the end of practice and were still there at two in the morning grinding in valves for the next day. At the next GP at Le Mans, Honda hired a garage near the circuit, so we had two shifts working on the engines. We did the day shift, then the night shift would start to refresh engines for the next day.”

The NR’s lack of results forced Honda to accept the unpleasant truth: if the company wanted to win the premier-class title it must swallow its pride and build a two-stroke 500.

But this didn’t happen until RSC had tried everything to make the NR succeed. “By mid-1980 it was obvious we needed to do something drastic,” recalls Honda’s team manager Gerald Davison. “Half joking, I told Irimajiri that he should send the team to a temple and tell them to reflect on what they’re trying to do. The very next day he did just that. A fleet of minibuses took us to a Buddhist temple and we took along some bike bits for blessing. We arrived at this beautiful place up a forest-clad mountain, with dancing girls and music. It was pretty spectacular.”

There was no magic solution. Towards the end of its GP career, the NR was fast enough to beat a production Suzuki RG500, but it was never going to worry the factory two-strokes, so Oguma knew there was only one way forward.

“If you do racing activity you must win – it doesn’t matter if you race four-stroke or two-stroke,” says Oguma, who masterminded Honda’s racing successes for the next decade or so. “The NR project didn’t have the basic elements and Honda spent so much money – the budget was like Mount Fuji!” 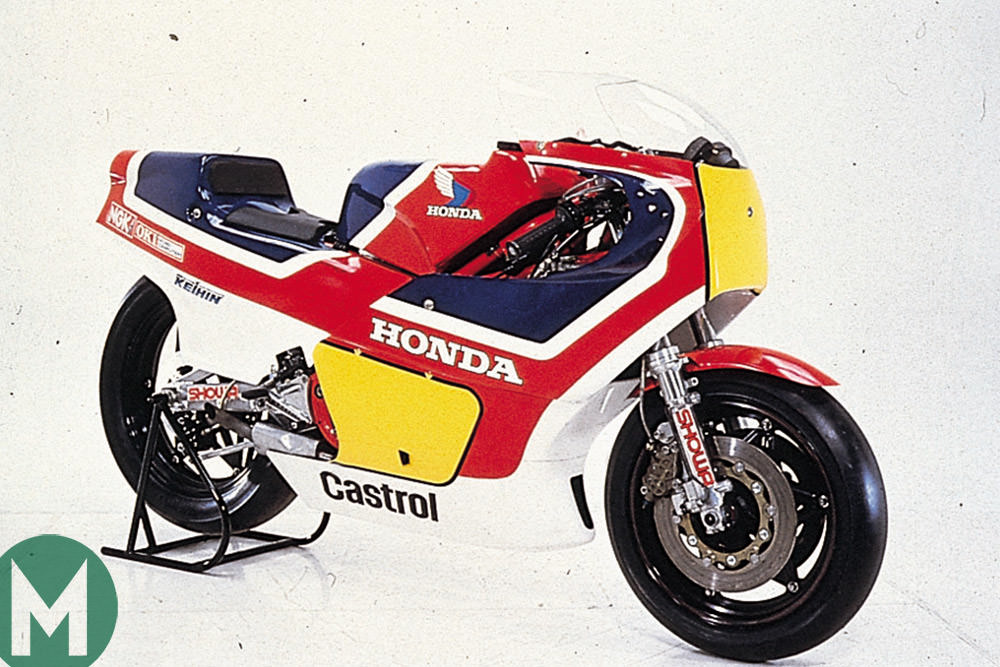 In 1981 Oguma travelled to several European GPs on a fact-finding mission, which resulted in the creation of the sublime NS500 (above), which Spencer rates as his favourite bike of all time.

Thus, the foundations of Márquez’s RC213V were built – with the NR500, the NS500, Murelli, Irimajiri and the rest.