A different front tyre may have changed the world champion’s race, but this isn’t the first time that the outside world has had its say in motorcycle sport 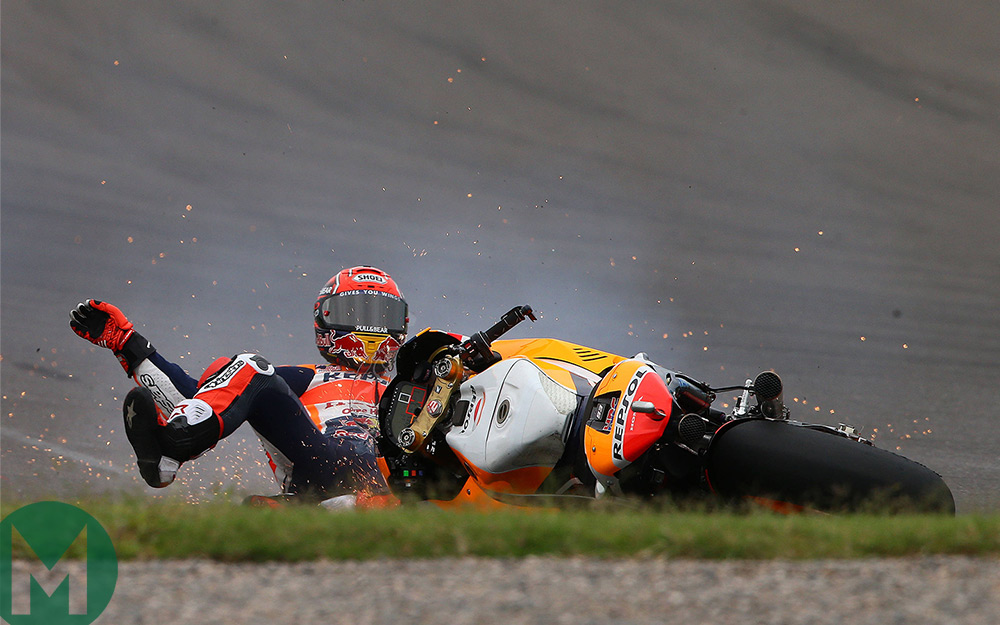 There are many good things about a MotoGP weekend, but one of the sweetest is living inside a MotoGP bubble for a few days and leaving the big, bad world behind.

Occasionally events in the big, bad world can puncture that bubble. That’s what happened almost exactly 35 years ago when the 1982 Grand Prix season got underway in Argentina, just as the Falklands War erupted. Most of the paddock only just made it out of the country in time, the vulnerable British contingent landing in Madrid, not London, because their Aerolineas Argentinas plane didn’t want to risk impoundment in Britain.

This year’s Argentine GP was also affected by outside events. A general strike gripped the country last Thursday, preventing Michelin’s harder construction front slick from making it to Termas de Rio Hondo in time. There’s no doubt that the strike cost Repsol Honda more than most: both its riders crashed out of Sunday’s race after losing the front. Marc Marquez and Dani Pedrosa were among five riders who requested the stiffer front tyre following the season-opener in Qatar. The other three were Honda’s third man Cal Crutchlow, Andrea Iannone and Valentino Rossi, whose front-end issues have been well documented.

It is no surprise that Honda riders wanted the tyre more than anyone, because the RC213V was originally conceived to take advantage of Bridgestone’s ultra-high-performing slick during braking and corner entry. The bike still retains its original character and therefore needs a stiff-construction front. If the general strike hadn’t happened and riders had been able to use the stiffer tyre Sunday’s result might have been different.

On lap four Marquez had hardly started leaning into the turn two left-hander when the front was sucked away from him. The bumps between the first and second corners slightly unsettled the suspension of his RCV, unloading and then overloading the front tyre, which was enough to bring him down. Pedrosa’s crash, 10 laps later at the same corner, was pretty much identical.

Michelin’s 2017 front may be better than its 2016 front – there were 12 MotoGP crashes during the weekend compared to 25 last year – but it’s still an edgy tyre that forces riders to walk a very narrow line. Perhaps that line would’ve been a fraction wider if Marquez, Pedrosa and the others had got the stiffer front. 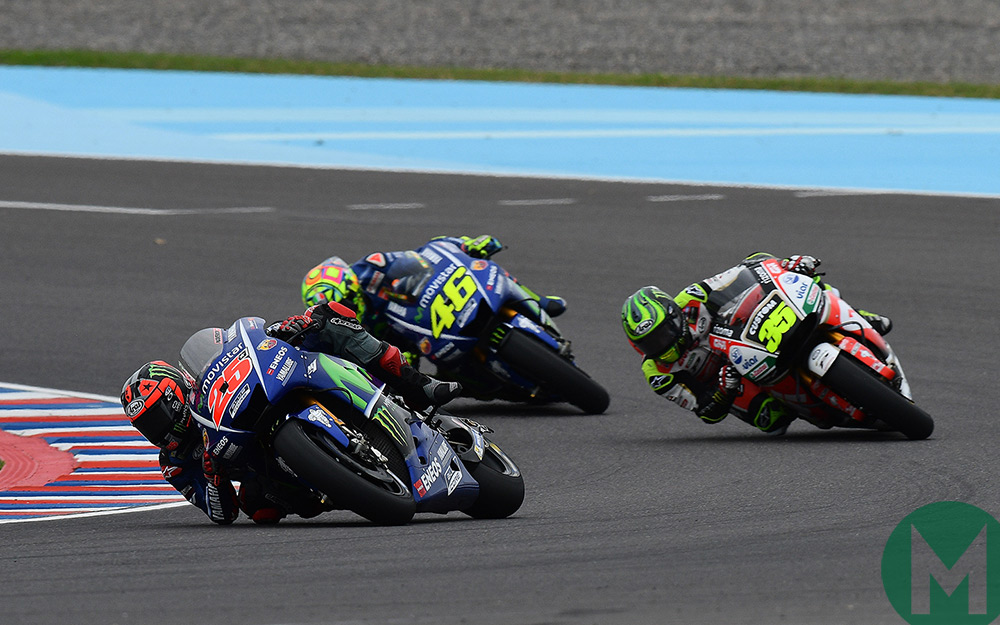 I feel bad for saying this, but the Michelin front certainly makes for thrilling, edge-of-the-seat racing, both for fans and riders, although in very different ways. It’s great for fans, because from the first lap to the last we get to watch riders teetering on the brink, using every riding trick they know to keep themselves from tipping over the edge and into the precipice. And that’s what bike racing has always been about: walking the line.

After what happened to Marquez and Pedrosa, Crutchlow probably deserves the biggest pat on the back for his podium finish, just eight tenths behind Rossi and 3.7sec behind winner Maverick Viñales. He walked that line unerringly, even though he was having a harder time of it than his Yamaha rivals.

“I managed to stay on the bike, which isn’t normal in a tricky situation,” grinned the Briton after his first race finish since his Phillip Island win last October. “When the bike moves a little it’s really easy to lose the front.”

In fact, Rossi deserved the biggest congratulations. The 38-year-old finished his 350th Grand Prix just 2.9sec behind the winner, or 5.4sec closer to victory than he managed in his Malaysian GP debut, on 31st March 1996, when Viñales was still in nappies.

There’s not much point in getting carried away with hyperbole when it comes to Rossi’s unique career, because we were already doing that a decade and more ago. Well, some of us were. In 2010 Yamaha let the Italian go because they were sure he was entering the twilight of his career. The fact is that Rossi’s abilities, his dedication and the sheer joy he gets from racing bikes, go way, way beyond what any of us can really comprehend. Before Sunday’s race, huddled by the front wheel of his Yamaha, the wily old goat looked aged, like the fight was going out of him. Stood on the podium 50 minutes later he looked years younger: buzzing on adrenaline, endorphins and a few slugs of cava.

The Rossi era seems like it could go on forever, but the Argentine Grand Prix appeared to represent some kind of a changing of the guard. By lap four of the 25 the two men who had won the past five MotoGP world titles were both out of the race. Has Viñales arrived to upset Marquez’s march through the record books, just as Marquez arrived to spoil Jorge Lorenzo’s fun four years ago?

Marquez will surely be back soon; Lorenzo may take a while longer. The 2010, 2012 and 2015 world champion must already be fondly remembering those days when racing was relatively easy, when he had a motorcycle that nearly always did exactly what he wanted it to do and exactly what he expected it to do. The weather has certainly been against him during his first two race weekends with Ducati, but it’s been the same for everyone. This is when a neutral, rider-friendly bike makes a huge difference.

I don’t feel sorry for Lorenzo. I make sure never to feel sorry for racers unless they are hurt, because as Nicky Hayden once said of his job, “it ain’t digging ditches”. Lorenzo isn’t having a nice time at the moment, but he is still one of the luckiest people on this planet.

Which brings us back to where we started: bike racing and the big, bad world. There’s probably never been a time when global events interrupted the sport more rudely than they did in August 1939, when many of the world’s best riders were contesting the International Six Days Trial in the mountains around Salzburg in Austria, which had already been annexed by the Nazis. On the third day of the event the Nazis and Russians announced the Molotov-Ribbentrop Pact, which quickly led to the invasion of Poland and the start of the Second World War.

Many of the British ISDT riders and crews were soldiers, who knew they were in danger as soon as the Nazis and Russians made clear their plans to carve up Poland. Sure enough, a telegram from the British embassy in Vienna told them to get out immediately. On the fourth and fifth days of the event the British army contestants started falling by the wayside and retiring; not altogether, but one by one, so as not to raise German suspicions. But this was only the start of their adventure.

The men were almost a thousand miles from home and they had no way of getting there, except by racing across Europe on whatever vehicles they had, hoping to cross the English Channel before war was declared. Some rode motorcycles, some drove cars, some commandeered sidecars and other vehicles. Much of the trip was through hostile territory, so they kept going, night and day, never knowing when they might be stopped and locked up.

Some years after the war those who took place in this nerve-jangling pan-European race referred to their trip home as the Great Escape. Germany was declared the winner of the 1939 ISDT, but the FIM annulled the result after the war.