This is one reason why Mir’s championship points score is the second lowest in 72 years of premier-class grand prix racing. Over the 14 races the 23-year-old Spaniard scored 171 points from a possible total of 350, a hit rate of just 48.85 per cent.

The Gilera was the blueprint for every inline-four, from Honda’s seminal CB750 to Mir’s GSX-RR

Only one other champion in the history of grand prix racing has lifted the crown while scoring less than half the available points. In 1952 factory Gilera rider Umberto Masetti won the 500cc world championship with 43.75 per cent of the maximum points score.

The purpose of this blog isn’t to suggest that Mir’s lowly score makes his championship anything less of an achievement, because even though Mir’s points tally was historically low it was still better than everyone else’s. (There are reasons for this year’s low scoring by the entire grid, which next week’s blog will examine.)

How to compare Mir’s 2020 championship with Masetti’s 1952 campaign? It’s almost impossible because between then and now motorcycle racing could hardly have changed more.

Seven of 1952’s eight rounds were staged at lethal street circuits: the old Assen, the Isle of Man TT, Montjuic Park, Spa-Francorchamps, Northern Ireland’s Clady, Germany’s Solitude and Switzerland’s Bremgarten. By the end of the year the 500cc class alone had claimed three lives: Dave Bennett at Bremgarten, Frank Fry at the TT and Norman Stewart at Clady. The MotoGP class hasn’t claimed a single life in nine years. 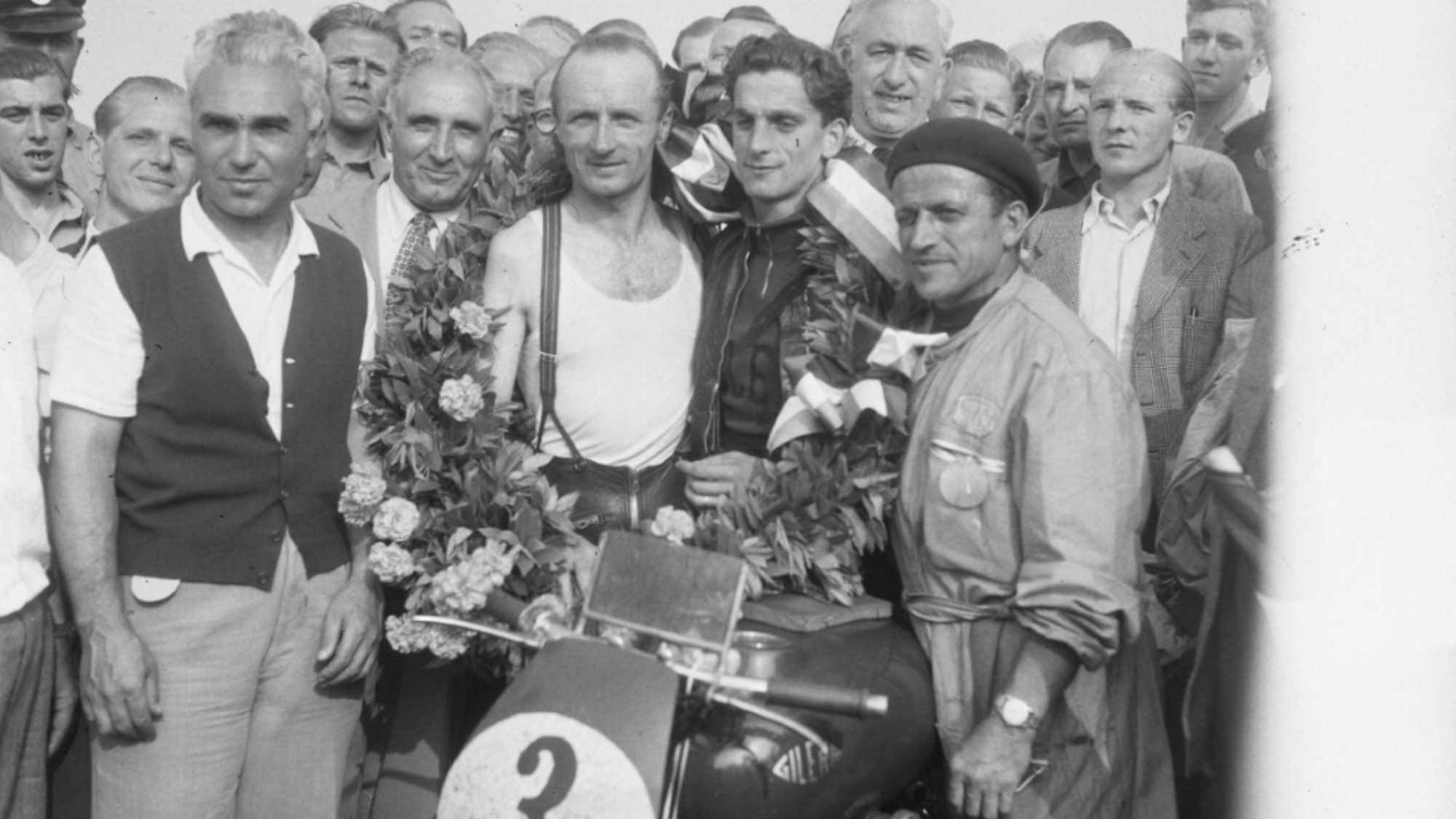 ‘Podiums’ of the 1950s were a bit different too! Masetti (in leathers) has just won the 1952 Dutch TT on the Gilera four. On his right are team-mate Nello Pagani (in vest, who finished sixth, three minutes down) and genius rider/engineer/team manager Piero Taruffi (in waistcoat)

The bikes have changed a bit too. Masetti’s Gilera 500 four produced 57 horsepower, about the same as a 2020 Moto3 bike, or five times less than Mir’s Suzuki GSX-RR. The Gilera had no bodywork and had only recently been equipped with hydraulic shocks, which replaced earlier scissor-type friction dampers. The bike was good for 140mph (225km/h), about 13mph (22km/h) slower than the fastest Moto3 bikes at September’s Catalan GP.

In fact there is one highly significant engineering comparison between Masetti’s bike and Mir’s bike – the Gilera inline-four was the blueprint for every inline-four, from Honda’s seminal CB750 superbike of 1969 to Mir’s GSX-RR.

The Gilera was a development of the very first transverse inline-four, designed in the early 1920s by two young engineering graduates from the University of Rome. Carlo Gianini and Piero Remor worked in a tiny office situated in a narrow, cobbled street near Rome’s Piazza Barberini, totally unaware of how they were going to change the world. (I’m getting a bit side-tracked here, but stick with me…)

Do MotoGP greats need to prove themselves on different bikes?

There’s a theory going around that top MotoGP riders, such as Marc Márquez, must prove themselves by winning titles with different brands. And it’s nonsense... Valentino Rossi quit Honda at…

The engine changed hands and also names many times. First it was called the GRB, G for Gianini, R for Remor and B for the project’s lead financier Count Giovanni Bonmartini, then the OPRA, after Bonmartini’s company Officine di Precisione Romane Automobilistiche, which was bankrolled by minor Italian royals Prince Lancelloti and Prince Rospigliosi. Later it became the CNA, after Bonmartini’s aero venture, CNA (Compagnaia Nazionale Aeronautica). Finally, in 1935 Gilera bought the project from Bonmartini.

Remor’s Gilera was the first bike to dominate the class of kings, taking six 500cc titles in the 1950s, with Masetti, Geoff Duke and Libero Liberati. Remor’s creations kept winning into the 1960s, because he left Gilera in a huff and joined MV Agusta, where he designed MV’s 500 four, which became the first GP bike to win every round of a world championship.

That was in 1959, when John Surtees became GP racing’s first 100 percenter. Surtees won all seven rounds of the championship, an impressive achievement, although it helped that rest of the grid, apart from his less talented MV team-mate Remo Venturi, rode hopelessly under-powered Norton and Matchless singles.

There’s only been one other 100 percenter since. In 1968 Giacomo Agostini won all ten rounds, on MV’s three-cylinder 500. That year Ago didn’t even have an MV team-mate to contend with, so he enjoyed a ridiculous technical advantage over the skint privateers.

Both performances were stupendous because at that time race bikes were notoriously unreliable, so riders had to nurse their machines to the finish.

On the other hand, Surtees and Ago had genius MV race boss Arturo Magni on their side, running the show and rebuilding engines, so Magni’s expertise was at the heart of MV’s reliability. 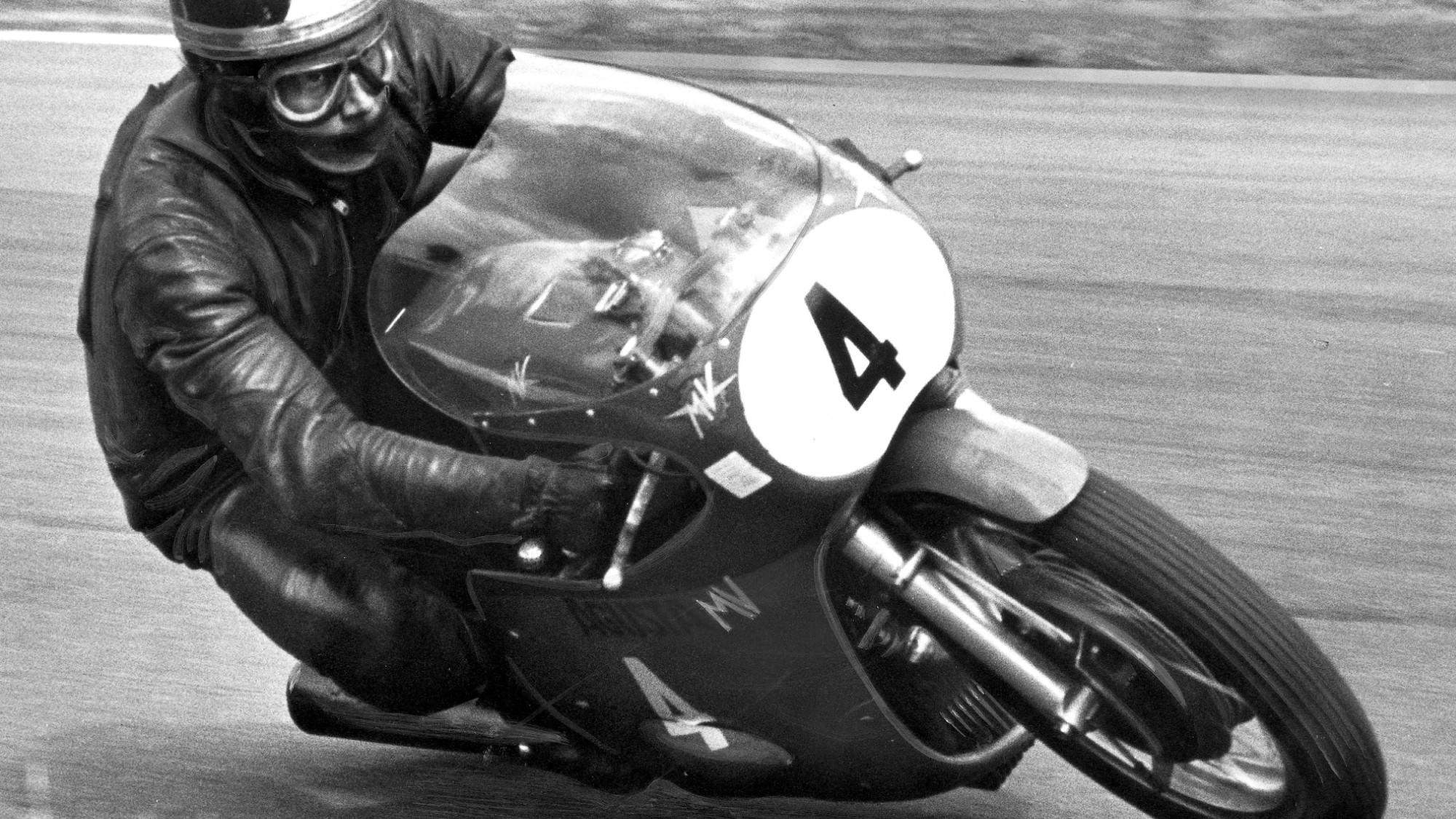 Agostini and the MV Agusta in 1969, when they won all ten 500cc grands prix

And Magni was lucky to have the resources of MV’s aerospace arm behind him. When there wasn’t time between races to drive back to MV’s HQ outside Milan he was allowed to use Count Domenico Agusta’s private plane to fly engines back to the workshop, rebuild them, then fly on to the next race.

No one else has got close to a 100 per cent score, but it will come as no great surprise that the next strongest grand prix seasons after Surtees and Ago were ridden by Mick Doohan, the teak-tough Aussie who ruled the second half of the 1990s. In 1994 Doohan achieved a 90.57 per cent core and three years later he increased that to 90.67 per cent, winning 12 of the 15 races aboard his Honda NSR500. No one else in more than seven decades has managed to join Doohan in the 90 per cent bracket.

The list of 80 per centers is a who’s who of grand prix racing’s greatest of the greats, led by Valentino Rossi, who cruised to the 2003 MotoGP title, riding Honda’s wondrous RC211V. That year Rossi stood on the podium at all 16 races, with an 89.25 per cent score.

Next best is Marc Márquez’s 2019 championship, when he climbed the podium at 18 of 19 races, only missing out at COTA, where he slid off while in the lead. That 88.42 per cent score might just be the greatest percentage achievement in MotoGP history, because to achieve such domination at a time when the racing is so competitive and unpredictable is remarkable.

Hayden won the 2006 title with ten podiums from 17 races and two wins, making him one of a very few riders to take the title with only two victories. Rainey took the title 1992 title despite crashing out of two races and missing another two through injury.

Sheene’s poor 1976 percentage was for different reasons. He missed the British round on the Isle of Man because he hated the TT and he skipped the last three races because he had already secured the title. This was his way of telling low-paying GP promoters to F-off. Instead, he finished his season at a Brands Hatch International, where he was paid £25,000 in cash (in today’s money).

Ago’s final 500cc championship success was very different from his 100 per center in 1969. In 1975 he became the first rider to win the class of kings on a two-stroke, winning four races and failing to finish three aboard Yamaha’s fast but fragile 0W26 four. 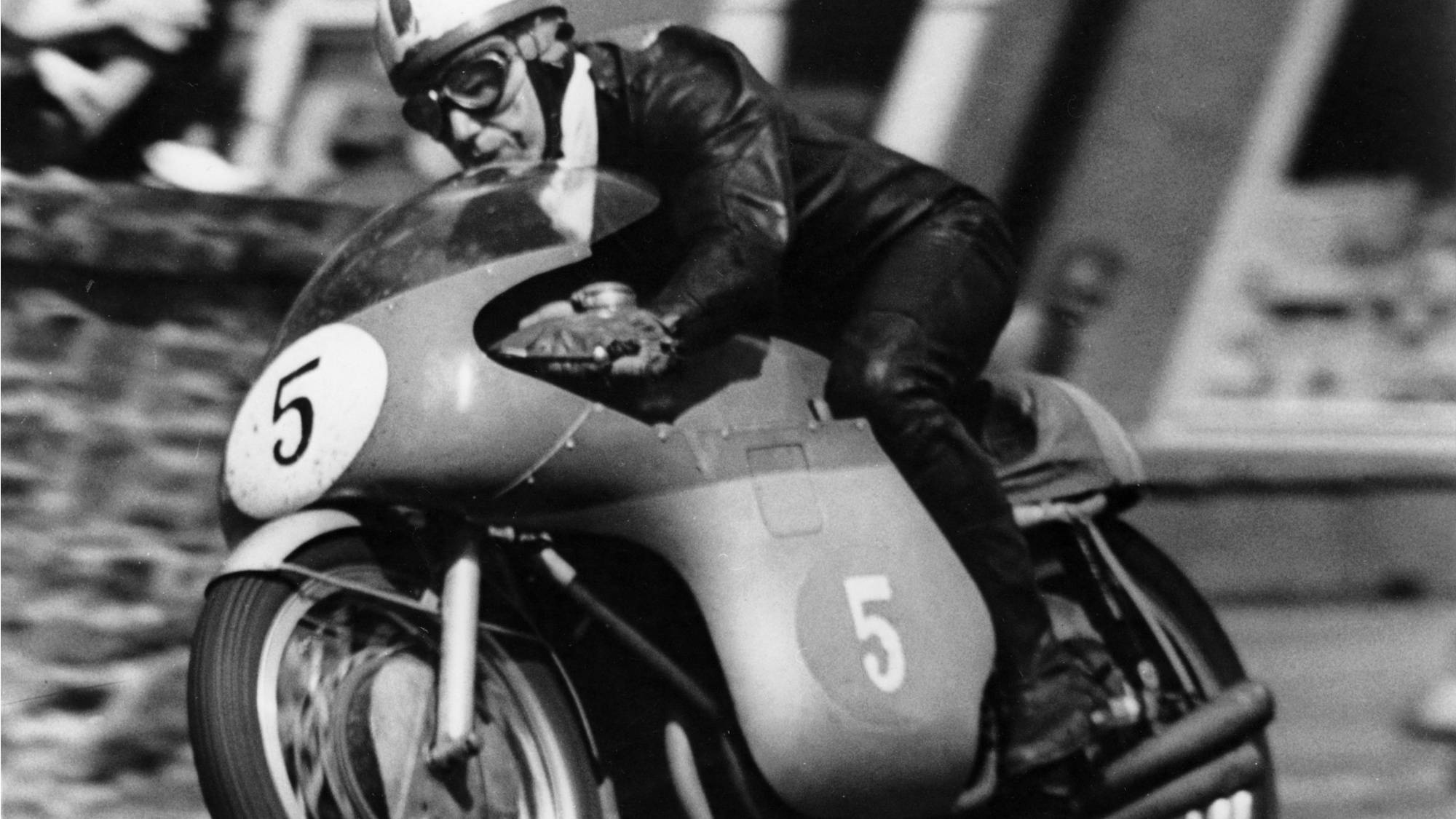