You would think that gold and glory would be enough to get them fired up, but a little extra always helps… 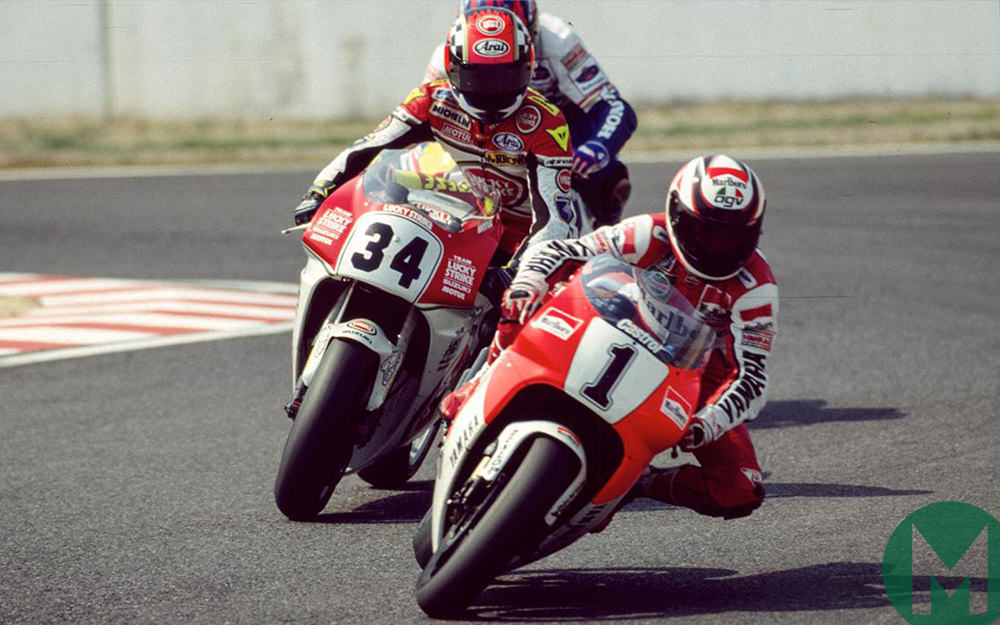 Journalists sit very low in the feeding chain in MotoGP. We have little or no use to the riders and teams, or at least that’s what they tell us.

But occasionally we do have our uses, because the pen can be a mighty thing.

During the winter of 1987/1988 Wayne Rainey was getting ready to contest his debut 500 Grand Prix season when a British journalist (I won’t name names) wrote the following about the future world champion.

“Wayne Rainey is a good rider; he may even become a great rider but he will never be a Randy Mamola.”

Rainey was so enraged that he cut out the offending story and placed it in his desk drawer. The words stayed there for a long time, but not as long as they stayed inside his head.

“I kept what he said in my head for years,” says Rainey, who went on to win three 500 world titles, three more than Mamola. “I remember it for lots of reasons, partly because it was Randy who I was replacing at Team Roberts. I was trying to do my best and I didn’t need anything to be fired up about racing, but riders are strange birds, they’ll use anything to motivate themselves. When I started out in 500s in 1988 I was a nobody, trying to find my way, but I found out pretty quick that this guy didn’t know what he was talking about.”

Indeed, Rainey won his first 500 GP at his 12th attempt and came within one crash of winning the title in his second season, before scoring a championship hat-trick, starting in 1990.

Did that journo help Rainey become the racer he became? Maybe just an itsy-bitsy bit.

I have some history here myself. At the end of the 1992 season I wrote that Rainey’s great rival, Kevin Schwantz, was “past his sell-by date”. To say that these few words fired up the Texan would be gross understatement.

“Yep, that one stayed under my skin long enough,” says Schwantz. “What I did more than anything was take what you wrote and store it in my memory, so whenever I didn’t feel like getting up to go training, I’d remember that I had to show f**kin’ Mat Oxley! It was like, f**k; I’m tired of going to the gym, tired of doing this, tired of doing that, so I’d go, f**k you!”

Can it be mere coincidence that Schwantz finally won title the next year? I think not. When I jokingly suggested that he owes me 10 per cent of his 1993 earnings, he laughed and said “exactly!”. However, I’m still waiting for the cheque for five-hundred grand to come through the letterbox.

In my defence, there was a reason I questioned Schwantz’s chances of winning the world title. When I interviewed him towards the end of 1992 I asked him what was more important to him: winning the world title or making lots of money. The latter, he replied. Fair enough, because as King Kenny Roberts liked to remind us: “10 cents and a world championship won’t buy you a cup of coffee”.

Schwantz had had a tough few years on Suzuki’s RGV500, which hadn’t been up to winning the world title, so he was starting to get disillusioned. “At that point I was like, screw it,” he adds. “I just need to race motorcycles, have fun and make as much money as possible.”

Of course, there are plenty more riders who have been fired up by negative comments from the media, at least two of which have gone on to win world titles.

“Those little comments you get are great motivation, I always used them as fuel for my fire,” says 1987 500cc world champion Wayne Gardner. “It was some Fleet Street journalist that pissed me off really bad. It happened at Donington, the first year I was in the UK. Donny Robinson couldn’t race because he was still having blackouts from a TT crash, so after practice, Mal Carter [father of Kenny and Alan; sponsor to Robinson, Ron Haslam and many more] said, ‘go ride it’. I’d never ridden around Donington and I’d not had any practice. I finished the race in 13th, but I was out of control. After the race this journalist came up and said, ‘where are you from?’ I said Australia. And he said, ‘I’ve got a little tip for you: get on the plane and never come back, because you’re a mobile chicane.’ A few years later, after I had won the 500 title, I was back at Donington and the same guy was there. I went up to him and said, remember me? Because I remember you, so f**k you!”

The media industry was one reason why twice MotoGP champion Casey Stoner retired at the end of 2012 while at the peak of his career.

“It’s quite frustrating when you’ve got journalists writing about things they don’t know about,” he says. “They’re more than happy to talk about things, having not been in that position and not understanding the pressures of racing. You’re working your arse off, doing your best and you’re getting abused because you’re not winning or whatever.

“Journalism seems to be all about the headline now. They’ll pick out one line from something which becomes the headline and that’s the whole story. I’m, like, you arseholes, you’re taking things out of context! Or a story gets translated into Italian, then retranslated back into English, saying I’m slagging Marc Márquez or Valentino Rossi. I’m like, good grief, do some decent journalism. It’s the same as in racing – I don’t like people who don’t put in the effort.”

Sadly, today’s riders have much more of this kind of thing to deal with, due to the relentless march of social media, clickbait headlines and fake news. The secret, of course, is to stay away from the internet, but that’s easier said than done, especially if you’re in need of some motivation.